The Harry Potter and the Chamber of Secrets illustrated edition is finally released today, October 4, by Bloomsbury in the UK and Scholastic in the US. After devouring the gorgeous illustrations in the first book in the series a year ago, we’ve been eagerly anticipating the release of the second book, with illustrations once again by Jim Kay.

Recently, Bloomsbury gave us a look at one character in the series that we were looking forward to seeing illustrated – Gilderoy Lockhart! You can see some other glimpses into the magical creations from the book, including Dobby and Aragog, below. 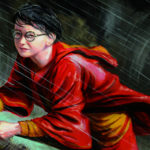 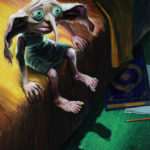 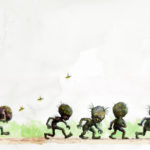 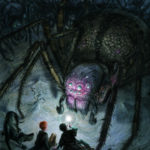 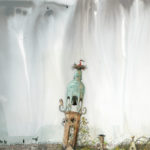 In a brand new and exclusive video, Kay has spoken about illustrating the books, what differed from the first book, and enjoying the challenges presented to him – and in particular getting to illustrate many wonderful plants and creatures. Check it out below.

The press release notes that

readers will be able to enjoy key moments such as the Ford Anglia flying over [t]he Burrow, Harry and Ron’s meeting with Aragog and the battle with the Basilisk rendered in Jim Kay’s unique and glorious style. Key characters also get the Jim Kay treatment, including Gilderoy Lockhart, Moaning Myrtle and fan favourite Dobby.

We can’t wait to see these characters brought to life by Kay – and you can get a glimpse at some of these moments already, in the gallery above. While Chamber of Secrets only hits our shelves today, it’s also been revealed that Kay is already hard at work on the third in the series, Prisoner of Azkaban, which will be published in October 2017.

The illustrated edition of Harry Potter and the Chamber of Secrets is out today, October 4, and is published by Bloomsbury (UK) and Scholastic (US). You can get your copy in all good bookshops and online. The recommended retail price in the UK is £30, and Bloomsbury also has a special deluxe edition, which costs £150.

Have you bought your copy of Chamber of Secrets yet? What’s your favorite new illustration? Let us know in the comments.

‘Seeing Jim Kay’s illustrations moved me profoundly. I love seeing Jim Kay’s interpretation of Harry Potter’s world, and feel honoured and grateful that he continues to lend his talent to it.’ J.K. ROWLING

As Harry Potter’s second year at Hogwarts takes him on another magical adventure, readers will be able to enjoy key moments such as the Ford Anglia flying over The Burrow, Harry and Ron’s meeting with Aragog and the battle with the Basilisk rendered in Jim Kay’s unique and glorious style. Key characters also get the Jim Kay treatment including Gilderoy Lockhart, Moaning Myrtle and fan favourite Dobby.

Harry Potter and the Philosopher's Stone Illustrated Edition was published to huge acclaim in October 2015 and has already sold over 120,000 copies in the UK and many more in other languages. The second book will be published simultaneously throughout the world, marking it as another truly global publication.

All seven titles in the Harry Potter series are set to become beautiful illustrated editions. Jim Kay and Bloomsbury are already hard at work on Harry Potter and the Prisoner of Azkaban, to be published in October 2017.

With colour artwork on every page Harry Potter and the Chamber of Secrets Illustrated Edition is a wonderful addition to the Harry Potter canon, and a dazzling depiction of the wizarding world that will captivate fans and new readers alike.

Author Biographies
J.K. Rowling
J.K. Rowling is the author of the record-breaking, multi-awardwinning Harry Potter novels. Loved by fans around the world, the series has sold over 450 million copies, been translated into 79 languages, and made into 8 blockbuster films. She has written three companion volumes in aid of charity: Quidditch Through the Ages and Fantastic Beasts and Where to Find Them (in aid of Comic Relief), and The Tales of Beedle the Bard (in aid of Lumos), as well as a film script inspired by Fantastic Beasts and Where to Find Them, her screenwriting debut, and a further extension of the wizarding world, due for release in November 2016. In 2012, J.K. Rowling’s digital company Pottermore was launched, where fans can enjoy her new writing and immerse themselves deeper in the wizarding world. J.K. Rowling has written a novel for adult readers, The Casual Vacancy, and also writes crime novels under the pseudonym Robert Galbraith. J.K. Rowling has recently collaborated with writer Jack Thorne and director John Tiffany on the stage play Harry Potter and the Cursed Child Parts One and Two, which is now running at The Palace Theatre in London’s West End. As well as receiving an OBE for services to children’s literature, she has received many awards and honours, including France’s Légion d’Honneur, and the Hans Christian Andersen Award.

Jim Kay
Jim Kay won the Kate Greenaway Medal in 2012 for his illustrations in A Monster Calls by Patrick Ness. He studied illustration at the
University of Westminster and since graduating has worked in the Library & Archives of Tate Britain and the Royal Botanic Gardens at
Kew. After producing a one-man exhibition at Richmond Gallery he was approached by a publisher and his freelance illustration work
began. Jim has produced concept work for film and television, and contributed to a group exhibition at the V&A Museum in London. He
now lives and works in Northamptonshire with his partner. On being commissioned to illustrate the world of Harry Potter he said, ‘From
my point of view it is, without doubt, the best commission you can be given … to be given the opportunity to design the characters, the costume, the architecture and landscapes to possibly the most expansive fantasy world in children's literature, well let’s just say I'm extremely excited about it. However, I am also mindful of the huge responsibility this represents. I just want to make sure I do the best job I
possibly can.’