Experiencing Quidditch Through a Camera Lens

Last weekend, at the US Quidditch Midwest Regional Championship, I had the opportunity to interview Cally O’Neill, the Public Relations Chair and photographer for the Minnesota Quidditch team.

As I was watching the match between Minnesota Quidditch and TC Frost that would send the winning team to US Quidditch Cup 10, I noticed a photographer decked out in a Minnesota hat running up and down the field, cheering loudly for her team. She was so invested, you could see her stress when her team was behind and her excitement when they made a good play.

In between her yelling and picture taking, Cally would take the time to talk to the fans, even fans from other teams that she seemed familiar with. I found it very interesting to see someone who was not a player so incredibly involved with the team, and I was very pleased when she agreed to an interview with me.

Lauren Bisgard: How long have you been a photographer?

Cally O’Neill: This has been my third term that I’ve shot for Quidditch, but other than that, it’s just been random shots. I haven’t been super officially a photographer for long.

Lauren: How long has the Minnesota Quidditch team been together?

Cally: I think this is their sixth year, sixth or seventh.

Lauren: When did you become involved with the team?

Cally: I’ve been public relations chair for two years. I’ve been traveling with them for the last three years.

Lauren: What interested you in being their photographer? Are you a big fan of Harry Potter, or a fan of the sport, or did you just know somebody from the team?

Cally: So I didn’t start to read Harry Potter or watch the movies until I started playing Quidditch. I just knew it was a full contact sport, so I wanted to play. I tried out for the original competition team when I was a freshman [and] made the B squad, so I practiced with them for the next two years. They always took care of me. They built a really personal connection with me. I kept breaking myself [laughs], so I knew I wasn’t good enough to actually play with them, but I wanted to keep traveling with them. I’m just so passionate about them because I know all of them individually.

Lauren: I could tell, you were helping me get excited! [laughs]

Cally: Good! Yeah, it’s just that I wanted to do something for them and be there for them like they are for me.

Lauren: What are your favorite memories with the team?

Cally: Gosh, well my freshman year I had gotten stood up, and the original Quidditch team, the girls and the guys from the team came and picked me up and took me to dinner and a movie to make me feel better. That was a big part of why they started to feel like family to me. Other than that, gosh, [laughs] last year’s Regional Championship was a blizzard. It was a blizzard! I was in a car with ten people – a big, huge van – and we were driving down an old country road, [which] was the only way to get to this place. We hit a patch of ice and almost flipped the car. We were in a ditch; we were tipping. I started hyperventilating and panicking because I was in the middle seat with the little strap over me, nothing else. So everyone else focused on comforting me while the drivers figured out how to drive away, and they told me later that that’s the only reason that they didn’t start panicking, is because they had to make sure that I was okay. But the fact that they were so welcoming and loving has always been okay. Also, the celebrations that happen are great; we have regular Quidditch parties at my house.

Cally: Just stupid, stupid memories and good times roughhousing. There was a “Qouse” – a Quidditch house my freshman year – that was just straight-up Quidditch people. So we’d go there and mess around.

Lauren: So it sounds like you’ve met a lot of people through the team.

Cally: Yeah. Half of my friends are Quidditch people, and I know people from other teams.

Lauren: It just seems like a sport that brings people together.

Cally: I’ve met a lot of people through here, and I’ve gotten a lot of opportunities from it. Blessed by this team.

Lauren: So how has the team done in the past?

Cally: We’ve made the US Quidditch Cup every single year since we were created. We won last year’s Regional Championship; we were just happy to get a bid.

Lauren: So it sounds like you guys have been pretty successful!

Cally: Yeah, we aren’t really talked about much ever, though.

Lauren: Well, hopefully that changes soon! So how stressful was it today? Your team played game after game, with very few breaks; it looked very stressful and exhausting.

Cally: [laughs] I’ve had a headache since 8:00 a.m. that didn’t go away until they called that last [Snitch snatch] good. The relief has been immense. That stress, though… I probably would’ve accidentally bitten off someone’s head if they looked at me the wrong way.

Lauren: Anyway, do you do anything else for the team besides photography?

Cally: Sure, I run their Facebook, Twitter, Snapchat, those things. I help set up for the Yule Ball, which is an annual event as a fundraiser. We sold it out last year with 800 people attending. We’re in the process of selling it out again; we’ve already sold $2,000-worth of tickets. I guess I also kind of team mom it a bit; since I’m not playing, I can take care of them when they need it.

Lauren Yeah, how is it not playing but still being a huge part of the team?

Cally: I’m so invested. [laughs] I get really angry if someone gets hurt, because that’s my child. Not actually, but they’re important to me. I love feeling like a family. That’s what makes it for me. If I didn’t feel like that, I wouldn’t travel with them.

Lauren: So did you start reading Harry Potter because of this, then?

Lauren: That’s so interesting, because for some people, including myself, it’s the opposite.

Cally: Yeah, we have a lot of people, actually, [who] don’t care about Harry Potter. But it’s a physical sport like rugby and basketball and cross-country – it’s all of them in one. They just wanted a sport like that.

Lauren: It brings so many people together: bookworms, jocks…

Cally: Exactly. And if you’re great with strategy – just not as fast – you can do just as well as someone who’s fast enough – just not the greatest strategist.

Lauren: Yeah, it is such an inclusive sport; it’s great.

Talking to Cally introduced to me a new perspective of the sport. She’s not a player anymore, but she is much too involved – practically and emotionally speaking – to simply be considered a fan. This was just yet another example of the inclusiveness that Muggle Quidditch offers.

Cally has taken hundreds of  magical photos for her team, and below I have included just a few from the Midwest Regional Championship. You can find more here. 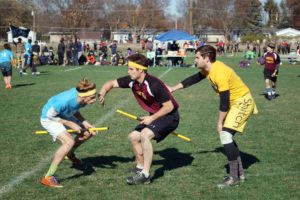 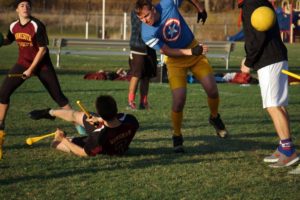 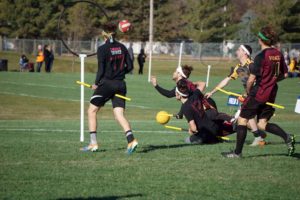 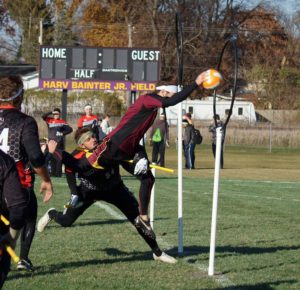