It’s been an impressive week for our Potter and Fantastic Beasts cast members, who have been busy working hard on new films, plays, and even some short films for charity. Take a look at what they’ve been up to in this week’s Role Call!

ICYMI, March 21 was World Down Syndrome Day. Families, friends, and loved ones helped support people with Down syndrome by sporting blue and yellow or wearing colorful socks. Domhnall Gleeson chose a different option, however. To help support World Down Syndrome Day, the actor participated in a short film that explains what Down syndrome is, how children who have it need a little something extra to help them flourish, and how a donation to the Down Syndrome Centre in Ireland can help them achieve more. Domhnall’s brother Brian also got a small role.

And while No-Majs living in the US searched the web in frustration for evidence of Hugh Grant shaking it to Hotline Bling as part of Comic Relief: Red Nose Day, UK Muggles were finally able to see the sequel to Love Actually.

Twitter and Periscope accounts across the UK were going wild for Red Nose Day Actually, which took us on a quick jaunt to see where most of the characters from the original film had ended up. Sadly, we received no update on Harry and Karen, as Emma Thompson and director Richard Curtis thought it was too soon to include anything after Alan Rickman passed away in January 2016. Thompson revealed that they had discussed it but ultimately decided against it.

It’s too soon. It’s absolutely right because it’s supposed to be for Comic Relief but there isn’t much comic relief in the loss of our dear friend really only just over a year ago.

However, nearly all the cast made a reappearance for the charity telethon, and we did happen to snag a link to the short film through user Amy Boon on Periscope, which includes an update on Bill Nighy’s dodgy rockstar character, Billy Mack. The video is a bit shaky, but you can still revisit all the feels you had from the first film by watching this wonderful sketch. God bless Hugh Grant and those old hips for providing one more moment of dancing joy. The telethon was also hosted in part by Warwick Davis.

Additionally, Stephen Fry and Eddie Redmayne auditioned to be the new voice for Stephen Hawking. Take a look and see whom Stephen chose as his new voice!

Those in the US will have to wait until May 25 before seeing the short film broadcast in full on their local NBC station.

The character David Thewlis is set to play in the new Wonder Woman film is still a mystery, but new stills of his character V.M. Vargas in the latest season of Fargo on FX have been released. Check him out! 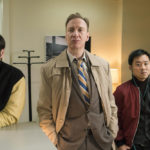 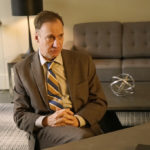 Actress Gemma Jones has a new indie project in the works! Known to fans of the wizarding world as Madam Pomfrey, the actress is still out there making wonderfully colorful film choices. In Gypsy’s Kiss, Gemma will play Judith, a woman who reclaims her independence after her husband dies. The script for the film was one of six winners in the 2017 Challenge Alexa Competition and was written by Samuel Jefferson. Here’s the synopsis, and you can learn more about the film here.

Judith, an elderly widow who reasserts her own sense of independence with an unconventional yearly pilgrimage to her late husband’s grave. Judith is a peach of a role that carries a defiant message of individuality, independence and freedom from a society which has kept her down for much of her life. Set in the East End of London, the film lives and breathes the cultures, characters and chaos that populate that part of London. it’s a veritable feast for the senses and one which we will lovingly celebrate.

Have you ever dreamed of becoming the next Steve Kloves or J.K. Rowling? Perhaps Jack Thorne’s Harry Potter and the Cursed Child has inspired you to write a new play? If you live in the London area and are able to snag a ticket, you could actually attend a class with Jack Thorne himself and learn all his tips and tricks for putting pen to paper to make all your writery dreams come true! Starting on April 9, Jack Thorne: How to Write Television Drama will open at BFI Southbank as part of the BFI and Radio Times Festival. Learn how you can attend by visiting the BFI website!

Speaking of Cursed Child, we found a few interesting projects that are being taken on by play cast members. Noma Dumezweni recently performed “Daffodils” by William Wordsworth for Radio 4 in celebration of the arrival of spring. Take a listen!

For perhaps a bit of a darker role, Cursed Child breakout star Anthony Boyle is adding to his Potter connections. The young actor has signed on to star as the son of Timothy Spall‘s character in an episode of Philip K. Dick’s Electric Dreams. The ten-episode anthology series will have an episode called “The Commuter”, written by Jack Thorne. Spall will play Ed Jacobson and Anthony will play Sam Jacobson. Take a look at a synopsis of the standalone episode, which will air on Amazon hopefully sometime soon, although no date has been given.

Ed Jacobson, an unassuming employee at a train station who is alarmed to discover that a number of daily commuters are taking the train to a town that shouldn’t exist. When he investigates for himself, he comes face to face with an alternate reality that forces him to confront his own struggles around his relationship with his wife Mary (Rebecca Manley) and his very troubled son Sam (Anthony Boyle).

In addition to his return to the role of rocker Billy Mack for Red Nose Day Actually, Bill Nighy has been on a promotional tour for his film, Their Finest. Nighy spoke with Vogue at the red carpet premiere of his new film, which follows a British film crew during World War II as they attempt to create propaganda films after the London Blitz to help boost the morale of the country and its soldiers.

I was born just after the war. My father was in the RAF; my mother worked nights during World War II, which was not a good idea, and you know my childhood was full of all these stories.

As for his style, which Vogue would obviously ask him about, Nighy kept it simple, as he does in all things.

It’s a very classic thing, and I keep it really simple. I never much change it. There is really only one color, and it’s dark blue. I’m endlessly fascinated by the possible mutations of what we used to call a two-piece lounge suit. It just amuses me to say lounge suit—I don’t know why I find that funny.

Keep on keeping it classy and simple, Bill. It looks wonderful on you!

According to an article in Deadline, it won’t be a Phelps twin who takes on a role in the live-action version of Disney’s Dumbo. Colin Farrell‘s name is being thrown around a bit in consideration of the role of Holt, a widowed father of two children from Kentucky. This is only rumor, of course, as negotiations can also fall apart. It would be interesting to see him in a Disney film again, even with a bit of a Tim Burton twist to the tale. We’ll keep our elephant ears open and bring you the latest as it happens!

With Fantastic Beasts and Where to Find Them coming out any day, we catch up with Second Salem leader Mary Lou Barebone, or rather, the actress who portrayed her. Samantha Morton may not find her way back into the wizarding world, considering how her character left it, but the actress is finding plenty of roles to keep her busy. Morton will star in a new Hulu series called Harlots, in which she plays brothel owner Margaret Wells. She had this to say about her upcoming role:

The series is written by a woman, directed by a woman, [and] produced by a woman. It’s a very female [oriented] show about women at a time when sex was a valuable commodity and married women had no power over their money.

The series will premiere this week, March 29.

We’ve already seen the teaser trailer for Emma Watson’s The Circle, but now the film has a poster ahead of its April 28 release date. Check it out below! That’s all for this edition of MuggleNet’s Casting News. The actors gave us all the feels with their charity work, and we are excited to see more projects come down the line for them! Now if you’ll excuse us, we must go watch Love Actually for the millionth time, now that we know how most of them end up.