We have tons of new projects coming from our Potter and Fantastic Beasts alum, including a modern twist on Hamlet, a new look at the legend of Excaliber, a completely bearded David Tennant, and an evil dictator played by Gary Oldman! All this and more in this week’s Casting News!

A poster and trailer were revealed this week for Score: A Film Music Documentary, which will feature Harry Potter composer John Williams.

Director Matt Schrader shines a spotlight on the overlooked craft of film composing, gathering many of the art form’s most influential practitioners to uncover their creative process. Tracing key developments in the evolution of music in film, and exploring some of cinema’s most iconic soundtracks, ‘Score’ is an aural valentine for film lovers.

Take a look at the trailer below and look for the film to premiere in your city this June!

While his character’s future on CW’s The Flash is uncertain, Tom Felton (Draco Malfoy) has another project lined up! Filming for Ophelia is rumored to begin this month in Prague, with Tom as Laertes. According to Variety, this re-imagining of Shakespeare’s Hamlet will be set in the 14th century but will be using a contemporary voice. In the play, Laertes is Ophelia’s brother but also a virtuous man whose virtues end up besting him as he seeks vengeance for his sister’s death. It remains to be seen how this character will be written in this new version. We can’t wait to see what Tom does with the role!

As we anxiously await the sequel to Fantastic Beasts and exactly what Jude Law (Albus Dumbledore, FB) may bring to the screen as a younger version of Albus Dumbledore, Law’s next film has just been released. King Arthur: Legend of the Sword has so far been panned by critics for lack of storytelling, but the clips released from the film give us a hint at Law’s talent. Take a look!

After seeing some of these clips, we think Law has the stones to play Dumbledore. What do you think?

New artwork for David Tennant‘s (Barty Crouch, Jr.) comedy You, Me and Him have surfaced. Included in the information surrounding the poster is the fact that Gemma Jones, our own Madam Pomfrey, will also star. Here’s a synopsis:

A witty romantic comedy set in middle class England about two female lovers, one a career driven lawyer (Lucy Punch) and the other a fun loving, pot smoking layabout (Faye Marsay); and their annoying Casanova neighbour (David Tennant).  While neither woman ever wanted children, both end up pregnant, creating conflicts that cause each to re-examine their outlook on life and the relationship.

Take a look at the beard on Tennant – it’s not how we are used to seeing him! 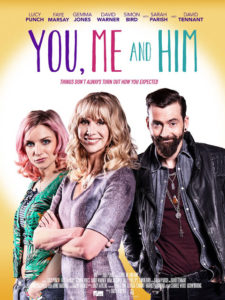 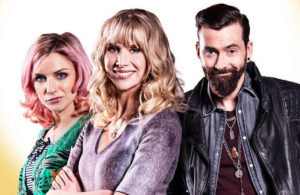 Cursed Child producer Colin Callender has joined the latest iteration of Louisa May Alcott’s Little Women. He joins PBS Masterpiece and BBC in producing a retelling of the book in a three-part adaptation of the story. Principle photography should begin sometime this July, with casting information released soon thereafter.

The miniseries is a storytelling form unique to television, and the opportunity to adapt Louisa May Alcott’s novel over three hours is a gift from the BBC and Masterpiece on PBS. This is a character study of young women rich in texture and detail, and it’s an honor to be able to bring it to life in this extended form with the great Heidi Thomas, one of the finest writers working in television today. In the hands of the exciting directorial style of filmmaker Vanessa Caswill, we hope to deliver a new screen version that will speak to contemporary audiences, meet the expectations of the book’s ardent fans and bring a whole new generation to this great classic.

Warwick Davis (Professor Flitwick/Griphook) continues to live out his dreams, tackling yet another role in the Star Wars franchise. The actor is rumored to be set to portray a new character in the new Han Solo film, if his tweets are to be believed.

Happy #StarWarsDay! May the 4th be with you! Today, I have the privilege of actually being in that galaxy far, far away at Pinewood Studios. pic.twitter.com/OIm8qTnUKi

Davis is further helping fans believe in this rumor, posting a behind-the-scenes video at Pinewood Studios, where the film is currently being shot.

We guess we will have to wait until May of next year to find out for sure!

Stan Yanevski (Viktor Krum) has been working on a new film, The Frame of Regret, and posting stills and videos to his Facebook page to give fans a glimpse. Now, we’re going to share it with you!

In addition to acting in the film, Stan has taken on the role of producer for the project! Good luck, Stan!

Katherine Waterston (Tina Goldstein, FB) has been busy promoting her new thriller, Alien: Covenant. The green carpet premiere took place in London last week, where Waterston stunned onlookers with her fashion. How about that arm candy she was wearing? I believe that’s the Michael Fassbender collection.

We finally get our first look at David Thewlis (Remus Lupin) in the new Wonder Woman film, due out on June 2. It doesn’t appear that he is the villain we thought he might be, although this is just a trailer so anything is possible. Take a look!

Fiona Shaw (Petunia Dursley), along with other celebrities like Sir Ian McKellan, are reading speeches from history in a number of short films titled Figures of Speech. The concept from Almeida Theatre “aims to harness the power of performance to explore big political and social ideas.” You can watch Shaw’s speech, “Shakespeare’s Sister,” part of the essay A Room of One’s Own by Virginia Woolf, based on a series of lectures she gave at Cambridge University in October 1928, below. You can learn more about the short films here.

We hear that filming is currently taking place on the biopic In Like Flynn and that a certain Fantastic Beasts star is rumored to be a part of the project! Now filming on the Gold Coast in Australia, In Like Flynn explores the life of actor Errol Flynn and will feature Dan Fogler (Jacob Kowalski, FB) according to the Hollywood Reporter. IMDb, however, does not list Fogler anywhere as part of the cast, so we are going to treat this as a rumor for now and will report back once we have confirmation. The film is expected to be released sometime in 2018.

Another rumor that has been circulating this week is that Sir Kenneth Branagh (Gilderoy Lockhart), known for his interesting adaptations, may be looking at bringing Otto Frank’s story of his attempt to publish the diary of his daughter Anne Frank to the big screen. According to Deadline, the legendary actor and director is only currently “in talks” to direct and star in Keeper of the Diary. If this comes to pass, Branagh will reportedly also be playing the lead, Otto Frank. We will bring you more on this story as it becomes available.

The Hitman’s Bodyguard, starring Gary Oldman (Sirius Black), Ryan Reynolds, and Samuel L. Jackson, released a new trailer last week! While the language is definitely leaning more towards the adult crowd, we certainly were entertained by it! Take a look here if you’re okay with a few curse words! Here’s the plot summary for the film, which is due to premiere in UK cinemas on August 18:

. . . an action comedy about the world’s top protection agent (Reynolds) and his new client: a notorious hitman (Jackson).  They’ve been on opposite ends of a bullet for years but now must come together for 24 hours to get from England to The Hague. The only thing standing in their way is the murderous dictator (Oldman) who uses his power to create trouble for the pair at every stop along their way.

Ralph Fiennes (Lord Voldemort) and Emma Thompson (Sybill Trelawney) will be contributing to Vanessa Redgrave’s project Sea Sorrow. The documentary is focused on the refugee crisis and will be the directorial debut for Redgrave. Exactly what the contributions from Fiennes and Thompson will be remains unknown at this time, but neither actor is a stranger to humanitarian or ecological efforts. We look forward to their work on the project!

We were super excited to find out that Natalia Tena (Nymphadora Tonks) will be starring in a new series on US television! Most networks revealed new shows and cancellations this week, and one of the new series announced by CBS was Wisdom of the Crowd, which will feature Tena alongside Jeremy Piven. We can’t wait to see who Tena’s character turns out to be on the new series!

‘Wisdom of the Crowd’ from writer Ted Humphrey (The Good Wife). Logline: ‘Inspired by the notion that a million minds are better than one, a visionary tech innovator (Jeremy Piven) creates a cutting-edge crowdsourcing app to solve his daughter’s murder, and revolutionize crime solving in the process.  Based on the Israeli format of the same name.’ Cast includes: Richard T. Jones, Jake Matthews, Blake Lee, Natalia Tena, Monica Potter.

Night in Hatton Garden, which will star Jim Broadbent (Professor Slughorn) and Sir Michael Gambon (Albus Dumbledore), is now fully backed and ready to begin production! The film will focus on the real-life heist in 2015 at the Hatton Garden Safe Deposit Company, which became the biggest heist in UK history. After reading about the heist, we can’t wait to see what might ensue with Broadbent and Gambon involved. Here’s a brief synopsis!

The drama revolves around the April 2015 Hatton Garden Safe Deposit Company heist in which robbers stole more than £200 million worth of loot in the biggest heist in UK history. The sheer scale of the crime captured the imagination of the British public and drove the media into a frenzy of speculation over who could have carried out such a feat. But the bigger story was to follow, when it was revealed the heist was carried out by a ragtag group of aging, ‘old school’ villains, who weren’t quite ready to retire. The drama details how an investigation finally turned to the gang of pension age criminals who pulled off the heist of the century and the cyber trail that led to their eventual capture.

The first few images from Potter producer Chris Columbus‘s I Kill Giants have surfaced. The adaptation of the graphic novel of the same name revolves around a girl battling both real and imagined monsters in her life, and the film will debut at the Cannes Film Festival for potential buyers. You can see the images here.

That wraps it up for Casting News this week! Feel free to drop us a line and let us know which projects you are most interested to see or what you would like our former Potter and Fantastic Beasts crews to take on next! And don’t forget to check out our next MuggleNet Live event, which is happening this September in Diagon Alley at Universal Orlando with some of our favorite Harry Potter film stars!