We’ve hit the motherlode this week when it comes to casting news and appearances! We’ve got stars walking all sorts of colored carpets, a video message that takes us back to church, and all sorts of supernatural creatures: angels, demons, and even some trollhunters.

In a video appearance last week, Dame Maggie Smith (Minerva McGonagall) remembered her time on the set of Sister Act and working with Whoopi Goldberg. The actress sent the video to Goldberg as a part of the 25th anniversary of the film’s release, which was celebrated on The View. Take a look below!

Miranda Richardson (Rita Skeeter) has been cast as Madam Tracey, a psychic medium who is tasked with helping save the world in Good Omens. Richardson joins David Tennant (Barty Crouch, Jr.) in the BBC miniseries, which will air in six parts. Here’s a synopsis of the plot:

The apocalyptic comedy ‘Good Omens’ centres on the final battle between Heaven and Hell, triggered by the arrival of the Antichrist on Earth. Caught up in the conflict are a stuffy angel-turned-bookdealer called Aziraphale (Michael Sheen) and a fast living, houseplant-terrorising demon, Crowley (David Tennant) who have been living among the human race for so long – since the Beginning, in fact – that they’ve become rather fond of the planet and its inhabitants and, if truth be told, each other. But the Antichrist is missing, the Four Horsemen of the Apocalypse are riding, and the forces above and below are calling on our antiheroes to join their ranks. Can the pair stop the inevitable? And how can a professional descendant, a former wages clerk and a part-time medium help them out?

Photos of Tennant as the demon Crowley, alongside Michael Sheen as the angel Aziraphale, have already hit the web, which you can see below. Good Omens is slated to air via Amazon Prime Video in 2019 as well as on BBC Two. 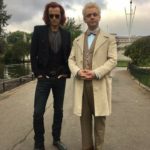 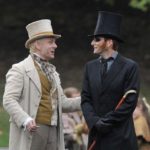 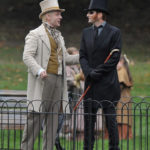 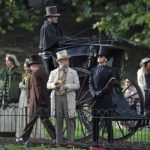 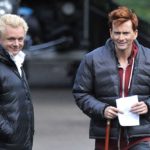 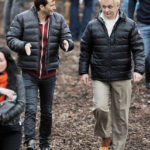 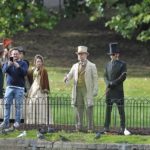 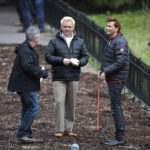 Speaking of Tennant, the second season of filming on Jessica Jones has wrapped according to star Krysten Ritter, which means we are that much closer to seeing how Tennant’s villainous character will return to Jessica’s world. Considering she snapped his neck at the end of the first season, it’s likely that Tennant’s character, Kilgrave, could be shown in some sort of dream sequence or flashbacks as Jessica deals with the fallout. On the other hand, set photos recently released also indicate that Kilgrave is not only messing with Jessica but also with her friend Malcolm. It remains to be seen exactly how he will return, but we are excited to see him once more. No date has been set for when the new season will be released for viewing on Netflix. 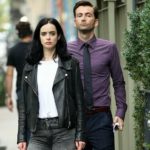 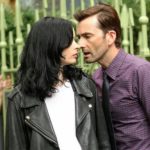 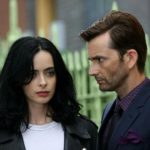 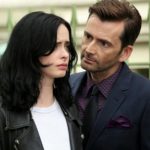 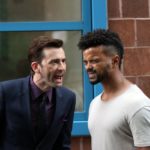 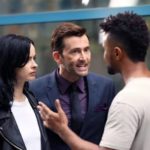 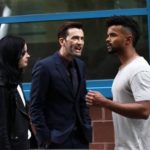 Earlier this year, we brought you the exciting news that David Bradley (Argus Filch) would return as the First Doctor in the Doctor Who Christmas special. Announced late last week was the plot for the Christmas special via an accidentally leaked synopsis from the American BBC Shop, which you can see below! First, let’s take a look at the teaser trailer, which was released back in July.

Now, spoilers! As part of the description of the DVD and Blu-ray of this special episode, titled “Twice Upon a Time,” the website revealed the plot. They have since removed the description, but you can see it in full via our spoiler box below. Don’t click it if you don’t want to be spoiled!

Doctor Who Christmas Special Spoiler
Two Doctors stranded in a forbidding snowscape, refusing to face regeneration. And a British army captain seemingly destined to die in the First World War, but taken from the trenches to play his part in the Doctor’s story. This is the magical last chapter in the Twelfth Doctor’s epic adventure. He must face his past to decide his future. And the Doctor will realise the resilience of humanity, discovering hope in his darkest frozen moment. It’s the end of an era. But the Doctor’s journey is only just beginning.

You can pre-order the special beginning February 20, after the air date on BBC One on Christmas Day.

In addition to the Christmas special, Bradley will continue his role as the First Doctor in new audio plays! The news came this week that Big Finnish is set to produce a series focusing solely on the adventures of the First Doctor. Volume 1 of the series will be available this January, while Volume 2 will follow later in July. The audio play will also star a Harry Potter and the Cursed Child actress, Claudia Grant, who originated the stage role of Polly Chapman. You can pre-order Volume 1 now and learn more about the series by visiting the Big Finnish blog here.

As if that wasn’t enough, Bradley has also joined the voice cast of the Netflix series Trollhunters. Bradley joins Season 1 cast member and Fantastic Beasts actor Ron Perlman (Gnarlack) in the series that follows an underground battle between good and evil trolls. Bradley will voice “a mysterious figure known to have great magical powers – but the Trollhunters find he’s not the mystical wizard they expected.” Looks like even the animated version of him is a bit of a Squib! Season 2 has not yet been given a start date for Netflix.

A second Fantastic Beasts cast member has made the news this week, as Zoe Kravitz (Lena Lestrange) walked the red carpet at the Emmy Awards. The always fashion-forward actress was included in this year’s “Best Dressed” list as she took a magical walk in a feathery Dior gown for the press before the awards show. Her television series Big Little Lies took home five Emmy awards, and stepping out on the stage with her cast mates made the dress even prettier! Check out her colorful style below!

Jason Isaacs (Lucius Malfoy) also stepped out this week in Hollywood, but his moment was on the blue carpet rather than the red! The actor posed with cast members from the new CBS All Access series Star Trek: Discovery. Take a look at photos from the premiere on September 19!

Meanwhile at the Toronto International Film Festival last week, Helena Bonham Carter (Bellatrix Lestrange) sashayed along the red carpet, her handbag declaring herself royalty as she attended in support of her latest film, 55 Steps.

The film takes a personal look at what it’s like to have a mental illness and take control over one’s psychiatric care. She spoke with Entertainment Tonight about the film and how long it took to get made. 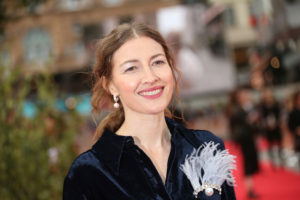 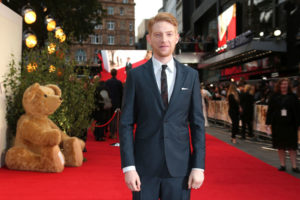 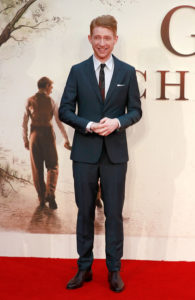 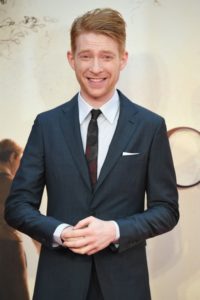 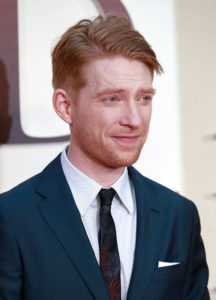 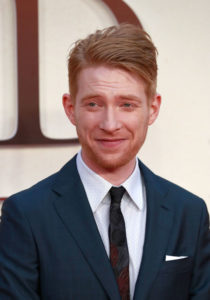 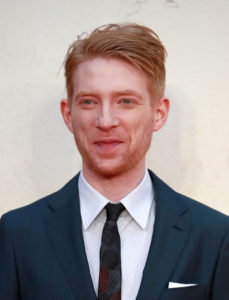 Domhnall and his mustache also hit the black carpet for his new thriller, mother!, earlier this month, which we somehow missed! We have no idea why he is making some of the faces he is, but it’s very entertaining!

Additionally, the first teaser trailer for Peter Rabbit was released a few days ago, and it features Domhnall in quite a funny scene. Get a load of the lungs on this guy!

Peter Rabbit is set to premiere February 9 with Domhnall starring as Mr. McGregor, a gardener intent on keeping hungry animals out of his vegetable garden. We can’t wait to see this film!

The trailer for Emma Thompson‘s (Sybill Trelawney) The Meyerowitz Stories has been released! We’ve been talking about this film for quite some time now, so it’s great to finally get our eyes on the trailer and Emma’s character. Take a peek here!

Finally, while we’ve been telling about the new series Electric Dreams, which will star Timothy Spall (Peter Pettigrew) and Anthony Boyle (Scorpius Malfoy, Cursed Child) as father and son in The Commuter, we had no idea that there were even more Rowling connections within the series! The Hoodmaker will be the first episode in the series and will star Holliday Grainger (Robin Ellacott, Strike) as a telepath named Honor, and Noma Dumezweni (Hermione Granger, Cursed Child) will portray Senior Agent Okhile. Here are some stills from the episode! 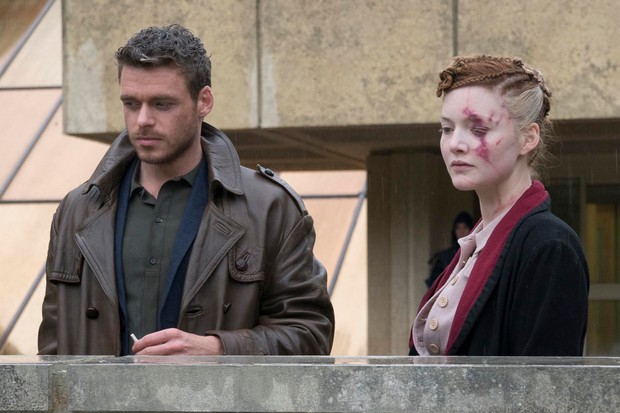 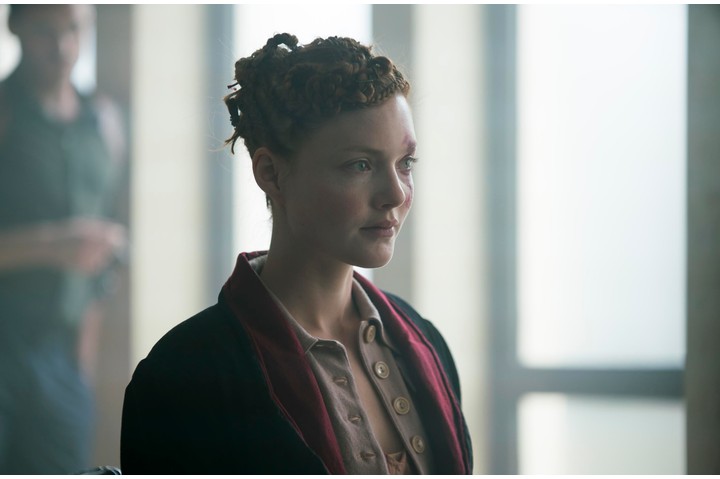 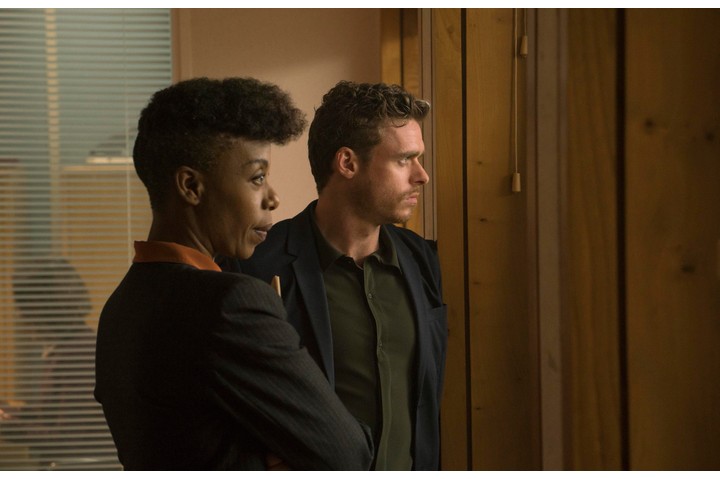 That wraps up this supernatural-filled edition of MuggleNet’s Casting News. Tell us which project you are most looking forward to seeing by leaving us a comment or sending us a tweet! We love hearing your thoughts on the various films and appearances our cast members attend!