Every year, toy retailers, creators, and enthusiasts gather in New York City for a magical three-day celebration and expo. The most exciting part is, of course, the announcement and testing of brand new toys that haven’t yet hit the market. This year, LEGO, Funko, and Jakks all premiered wonderful lines of Harry Potter-inspired toys that will make any fan’s heart sing, child or otherwise.

LEGO has released several versions of the Hogwarts Castle, but this most recent iteration might just be the best one yet. It focuses specifically on the Great Hall, where House banners are flying, Harry and Draco are bickering, and Professor McGonagall watches it all with a smile. The set, which retails for $99.99, will launch August 1 and features tons of incredible tiny details that we missed in earlier versions. Maryellen Zarakas, Senior Vice President of Franchise Management & Marketing for WBCP, is ecstatic about the new release:

Together with our long-standing partners at the LEGO Group, we’re excited to bring Harry Potter back into LEGO form and expand the world with the addition of Fantastic Beasts sets. These new sets allow us to strengthen the emotional connection our fans have with the [w]izarding [w]orld as they bring to life their favorite characters and memories from the films. 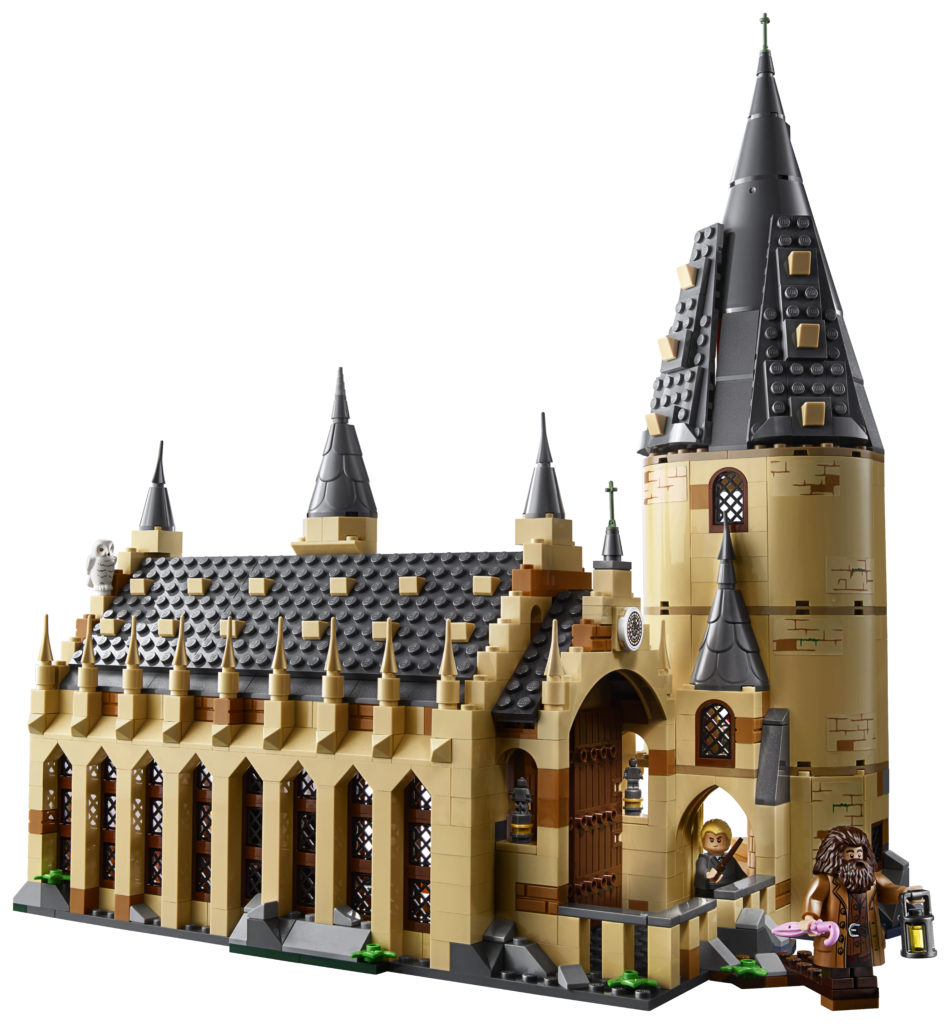 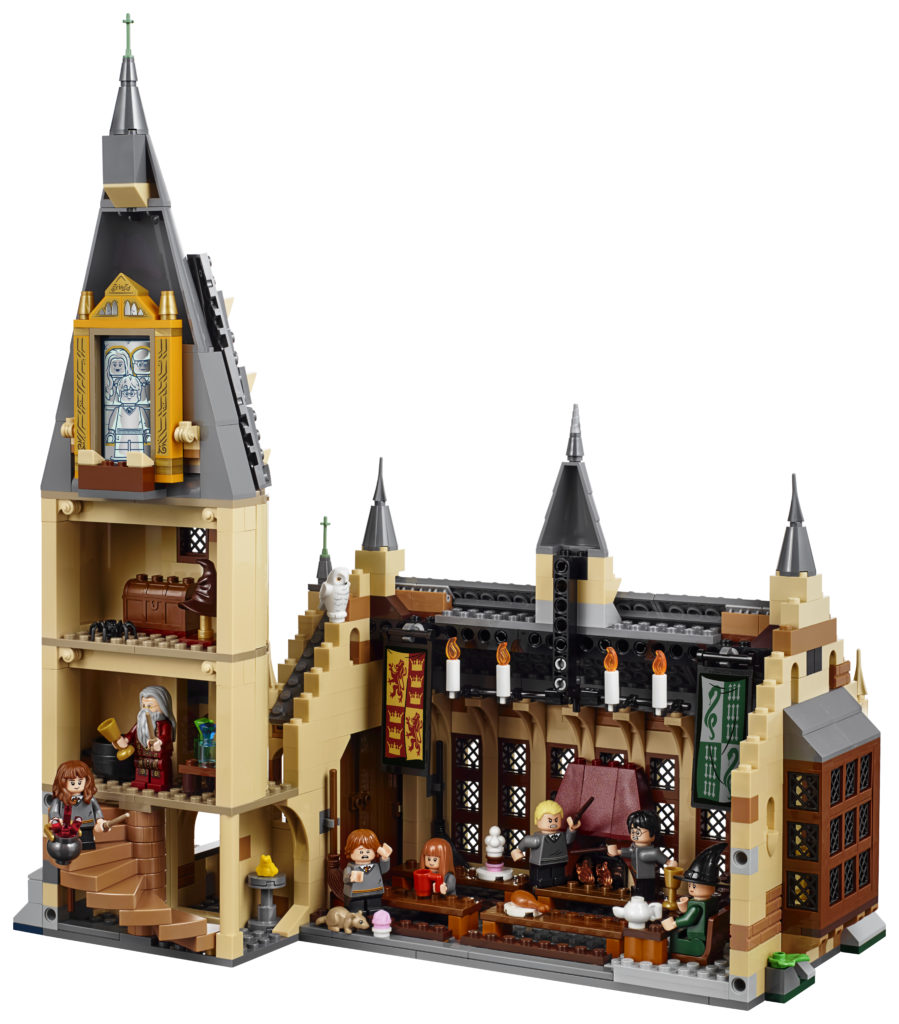 Funko, creator of the iconic POP! figure, is expanding its Rock Candy line to include six new character figures: Harry Potter with the prophecy orb, Ron Weasley in his Quidditch uniform, Sirius Black in his Azkaban prison uniform, Voldemort, Dumbledore, and Neville Longbottom holding the sword of Gryffindor. Neville’s figure will only be available at Barnes & Noble, but the rest will be released in many stores in June. Jakks has released the most expansive line this year, with a whole host of new toys. Most exciting is its set of technologically enhanced wands in the Harry Potter Wizard Training Wand collection, as well as an assortment of Die-Cast Wands inspired by fan-favorite characters. These technologically enhanced wands use motion sensors to track movement throughout five different modes of play, allowing you to cast 11 different spells. The assortment includes Harry Potter’s wand, Albus Dumbledore’s wand, and Voldemort’s wand, each sold for $24.99. Jakks also announced the Niffler Challenge Game, inspired by Fantastic Beasts and Where to Find Them. This two-player game allows each player to load up the Niffler with jewelry and coins until they spill onto the cases; the first player to spill the contents wins. All of these toys will hit the market this fall! 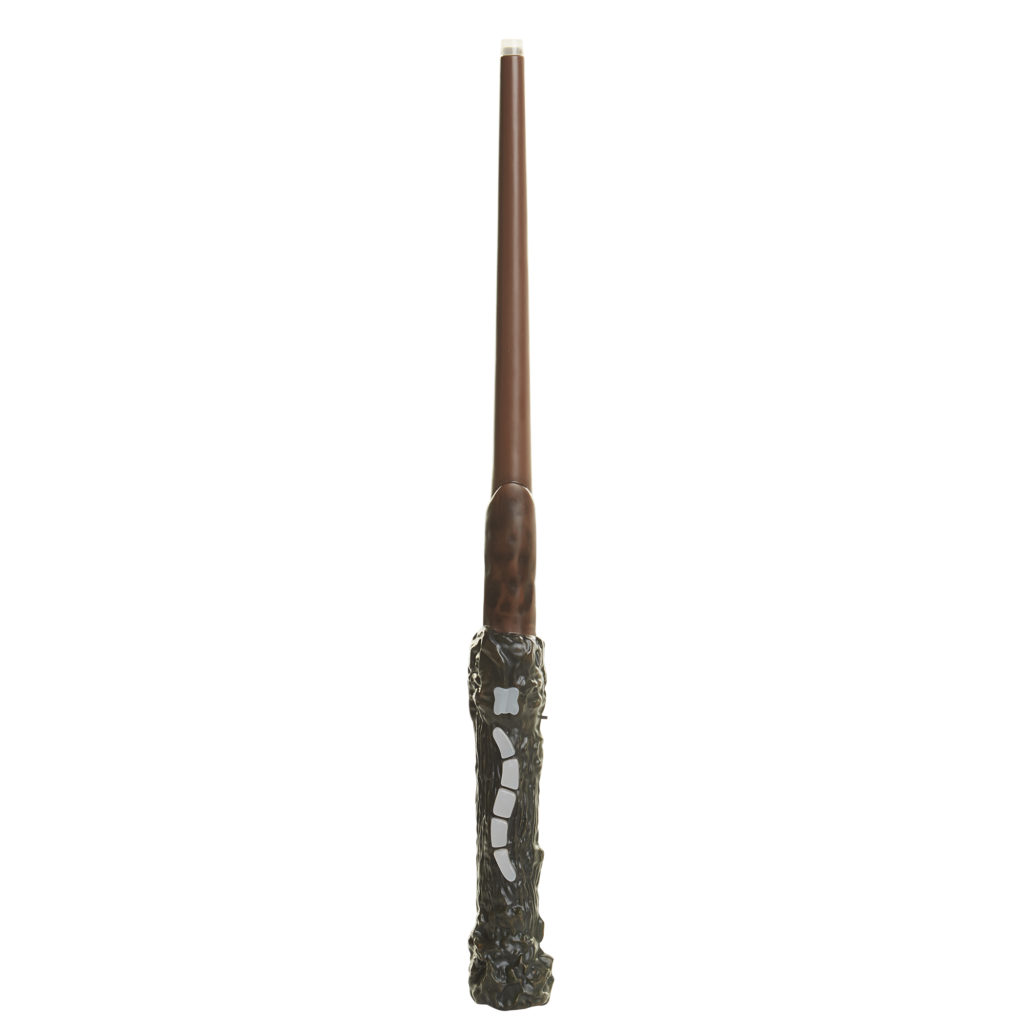 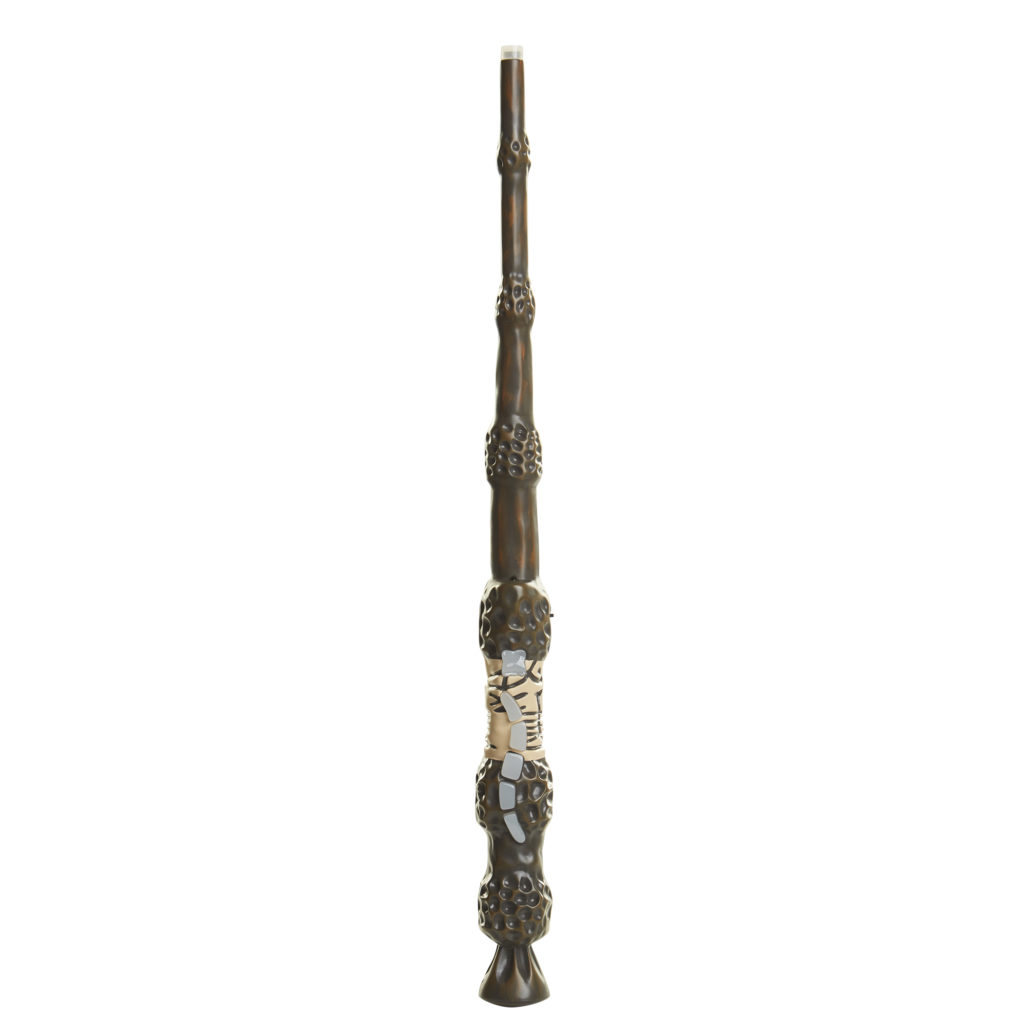 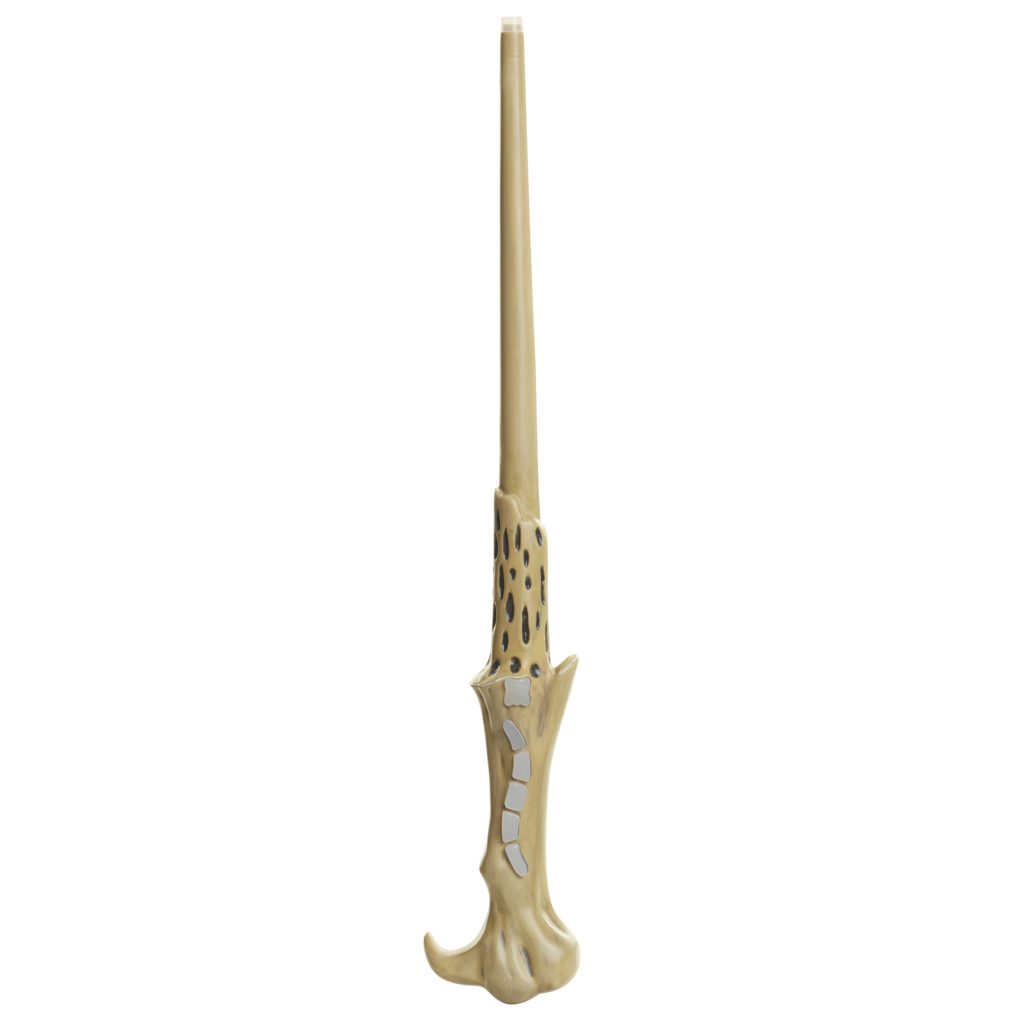 Though we have to wait quite a few months to get our hands on these fantastic new toys, we can at least see these sneak-peek photos from the toy fair. Take a look down below, and tell us which is your favorite!

LEGO® SETS FROM THE WIZARDING WORLD™ - DEBUT IN 2018 -Ongoing Partnership with Warner Bros. Consumer Products Yields New Building Sets and Collectibles Inspired by Harry Potter™ and Fantastic Beasts™ Film SeriesNEW YORK, NORTH AMERICAN INTERNATIONAL TOY FAIR (February 16, 2018) – LEGO Systems, Inc., in partnership with Warner Bros. Consumer Products, announces that a collection of LEGO® sets inspired by the Wizarding World will launch in the second half of 2018, bringing the film worlds of Harry Potter™ and Fantastic Beasts to life in LEGO form. This is a collection of building sets and collectibles inspired by the global blockbuster film franchises, slated to engage fans of all ages. The LEGO Wizarding World-inspired building sets call on families’ creativity and imagination to recreate the action-packed storylines from the films and feature a cast of fan-favorite wizards, Muggles and magical creatures in LEGO form – from Harry Potter, Ron Weasley and Hermione Granger to Newt Scamander and more. Fans of all ages will also be able to collect their favorite Wizarding World characters in the all-new LEGO BrickHeadz building sets, and fan-favorite Minifigures. During the annual Toy Fair in New York, the LEGO Group will unveil a special sneak peek of the LEGO Harry Potter Great Hall ($99.99) building set, which will launch August 1st. Additional building sets and figures will launch in the second half of the year, with more details to come soon. Jill Wilfert, vice president, licensing and entertainment for the LEGO Group said, “When it first launched in 2001, LEGO Harry Potter was a global sellout due to its broad appeal and ability to spark imaginative play, so we’re thrilled to go deeper into the Wizarding World to bring even more magic and excitement to LEGO play. The Harry Potter and Fantastic Beasts stories are perfectly suited to construction play, and our designers cannot wait for fans to see how the films are reimagined in our new collection of building sets and collectibles.” Maryellen Zarakas, Senior Vice President of Franchise Management & Marketing for WBCP said, “Together with our long-standing partners at the LEGO Group, we’re excited to bring Harry Potter back into LEGO form and expand the world with the addition of Fantastic Beasts sets. These new sets allow us to strengthen the emotional connection our fans have with the Wizarding World as they bring to life their favorite characters and memories from the films.”

JAKKS PACIFIC PARTNERS WITH WARNER BROS. CONSUMER PRODUCTS TO CAST A SPELL ON THE TOY AISLE WITH NEW HARRY POTTER AND FANTASTIC BEASTS TOYS COMING THIS FALL SANTA MONICA, Calif., February 16, 2018 – JAKKS Pacific, leading U.S. toymaker (NASDAQ: JAKK), partners with Warner Bros. Consumer Products to bring innovation and interactive play to the toy aisle, allowing kids to bring their favorite Wizarding World stories to life. This month at New York Toy Fair, JAKKS Pacific and Warner Bros. Consumer Products will reveal new technologically-enhanced Wands in the Harry Potter Wizard Training Wand collection, as well as an assortment of Die-Cast Wands inspired by fan-favorite characters. Additionally, the Wizarding World™ toy line will also include the new Niffler Challenge Game inspired by Fantastic Beasts and Where to Find Them. With 11 different spells to learn and master, kids can now train like a wizard with the Harry Potter Wizard Training Wands. Using active motion sensors, these wands track movement throughout five different modes of play, allowing for endless spell casting [sic] alone or with friends. The Wizard Training wands assortment includes Harry Potter’s Wand, Albus Dumbledore’s Wand, and Lord Voledemort’s [sic] Wand; each sold separately for $24.99. Kids can also collect die-cast replica wands from some of their favorite Harry Potter characters. With a variety of 12 different styles, for only $4.99 kids can master the wizardry of Ron Weasley, Hermione Granger, Harry Potter himself, and many more. Each wand stands 4-inches high and includes a special stand for display purposes. And in the spirit of Wizarding World magic, each wand is sold in a blind mystery box allowing the wand to choose its wizard! JAKKS Pacific also introduces the Niffler Challenge Game, inspired by Fantastic Beasts and Where to Find Them. This two-player game allows each player to load up the Niffler with jewelry and coins until they spill onto the cases; the first player to spill the contents wins. For the first time the adorable, mischievous Niffler has its own game. The game includes one Niffler on a rocking base, two wands, 64 coins and necklace pieces – available for $19.99 this Fall. “We’re thrilled to partner with Jakks Pacific to bring innovative technology and interactive play to the toy aisle and fans of the Wizarding World,” said Julian Montoya, Senior Vice President, Global Toys for WBCP. “This new collection of interactive wands, along with the fun collectible wands and Niffler game, will excite Harry Potter and Fantastic Beasts fans and inspire creative storytelling to extend their favorite moments from the books and films.” About Warner Bros. Consumer Products Warner Bros. Consumer Products (WBCP), a Warner Bros. Entertainment Company, extends the Studio’s powerful portfolio of entertainment brands and franchises into the lives of fans around the world. WBCP partners with best-in-class licensees globally on an award-winning range of toys, fashion, home décor, and publishing inspired by franchises and properties such as DC, J.K. Rowling’s Wizarding World, Looney Tunes and Hanna-Barbera. The division’s successful global themed entertainment business includes groundbreaking experiences such as The Wizarding World of Harry Potter and Warner Bros. World Abu Dhabi (opening 2018). With innovative global licensing and merchandising programs, retail initiatives, promotional partnerships and themed experiences, WBCP is one of the leading licensing and retail merchandising organizations in the world. HARRY POTTER characters, names and related indicia are © & ™ Warner Bros. Entertainment Inc. J.K. ROWLING`S WIZARDING WORLD™ J.K. Rowling and Warner Bros. Entertainment Inc. Publishing Rights © JKR. (s18) FANTASTIC BEASTS AND WHERE TO FIND THEM characters, names and related indicia are © & TM Warner Bros. Entertainment Inc. Publishing Rights © J.K. Rowling. (s18) About JAKKS Pacific, Inc. JAKKS Pacific, Inc. (NASDAQ: JAKK) is a leading designer, manufacturer and marketer of toys and consumer products sold throughout the world, with its headquarters in Santa Monica, California. JAKKS Pacific’s popular proprietary brands include BIG-FIGS™, XPV®, Max Tow™, Disguise®, Moose Mountain®, Funnoodle®, Maui®, Kids Only!®; a wide range of entertainment-inspired products featuring premier licensed properties; and C’est Moi™, a youth skincare and make-up [sic] brand. Through JAKKS Cares, the company’s commitment to philanthropy, JAKKS is helping to make a positive impact on the lives of children. Visit us at www.jakks.com and follow us on Instagram (@jakkstoys), Twitter (@jakkstoys) and Facebook (JAKKS Pacific).