Draco Malfoy never quite loses his sense of superiority over others but does make earnest efforts to discard his family’s pure-blood ideals and change for the better. Luna Lovegood recognizes those efforts as genuine and – to his surprise – befriends him. Draco is skeptical of her value at first but comes to benefit enormously from her ability to take the weight of the world off his shoulders. Luna in turn respects Draco’s deep love for his family and shows him kindness and acceptance long before others are ready to do so. As highly intelligent, curious, and passionate people, Draco and Luna get along comfortably and can spend hours on end in serious discussions of magical theory and experimentation, wizarding society, and even the fantastic and elusive Crumple-Horned Snorkack.

Angelina Johnson, as a talented student and natural leader, is a strong role model for young Gryffindor women, particularly for women of color like Hermione, Lavender, and Parvati. In her first year especially, Hermione looks to Angelina as an example of how to successfully navigate her new life at Hogwarts, and Angelina sees much of herself in the eager, driven Hermione. Angelina, as a fellow budding feminist, is one of the few Gryffindor students to declare full support for SPEW when Hermione approaches her. When the Yule Ball comes around, Angelina helps Hermione choose her dress robes and style her hair. They remain close friends in the years after the war and become even closer when they both become part of the Weasley family.

When Voldemort calls for a ceasefire during the Battle of Hogwarts, Bill immediately sets out to retrieve the injured and dead from around the castle. He finds Lavender Brown awake and shaking, her face and arms mangled by what he recognizes as a vicious attack from Greyback. He rushes her to Madam Pomfrey and holds her hand as her wounds are tended to, assuring her that she is not alone. After the war, Bill and Lavender remain connected by the trauma they both share. With Bill and Fleur’s guidance, Lavender learns to cope with her new behaviors and tastes. Each is the only person who truly understands what the other has been through and each benefits from the support the other provides, especially on difficult days. Eventually, due to Bill’s insistence upon inviting her to dinners and family gatherings, Lavender becomes a part of the extended Weasley clan.

A few years after the war, Harry is surprised to find Dennis Creevey, newly graduated from Hogwarts with top NEWT scores, among the newest batch of Auror recruits. As he watches Dennis rise through the ranks and master complex magic with determination, he is painfully reminded of Neville Longbottom’s ferocity when the woman who tortured his parents was released from Azkaban. Harry takes it upon himself to personally mentor Dennis as he completes his Auror training and to ensure that his young friend will not be left completely alone in the wizarding world on his account. The two of them quickly become trusted partners and good friends. Of all his colleagues, Dennis is the only one who truly understands what drives Harry to continue to devote his life to seeking out and eradicating the Dark Arts. 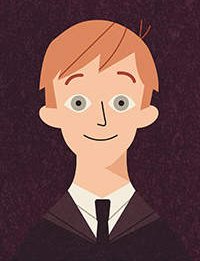 Unlike the rest of her classmates, Minerva is far from instantly smitten with the handsome, soft-spoken, intelligent prefect; in fact, they are bitter rivals from the moment they first meet. The majority of their interactions involve some combination of cool sarcasm, biting insults, and fierce glares across classrooms. Minerva senses something suspicious and even sinister beneath Tom’s charming façade. They both set themselves apart as the top students in their year and each endeavors constantly to outshine the other. For his part, Tom has a begrudging respect for Minerva’s abilities but also has enough sense not to attempt to recruit her or those close to her into his gang’s illicit activities. Years of unfortunate incidents culminating in Myrtle Warren’s death validate Minerva’s intense dislike of Tom long before he stuns his former classmates and resurfaces as Lord Voldemort.

(This pair would never have been friends, but – had they attended Hogwarts together – their enmity would be fascinating to observe.)