Today is dedicated to mothers everywhere. To celebrate Mother’s Day, I look at the top five mothers in the Harry Potter series.

Lily made the ultimate sacrifice for her child. She faced the fiercest and most terrible wizard of her time, all in an attempt to save her child. Even though she died doing so, her love for Harry stayed with him for the rest of his life and even protected him later on.

Your mother died to save you. If there is one thing Voldemort cannot understand, it is love. He didn’t realize that love as powerful as your mother’s for you leaves its own mark. Not a scar, no visible sign . . . to have been loved so deeply, even though the person who loved us is gone, will give us some protection forever” (SS 299).

Even with seven children of her own, Molly still had room in her life and heart to take in Harry. Seeing a child without parents, she didn’t hesitate to make him feel welcome in her family and home. She took the time to include him in her family traditions by making him a sweater every Christmas and housing him every year.

Although Narcissa initially sided with Voldemort, that didn’t stop her from protecting her child as best she could. She was willing to risk everything to get to Draco, even protecting Harry and lying to Voldemort. Her actions led to Voldemort’s defeat.

‘Is Draco alive? Is he in the castle?’
The whisper was barely audible; her lips were an inch from his ear, her head bent so low that her long hair shielded his face from the onlookers.
‘Yes,’ he breathed back.
He felt the hand on his chest contract; her nails pierced him. Then it was withdrawn. She had sat up.
‘He is dead!’ Narcissa Malfoy called to the watchers” (DH 726).

Augusta is presented as a stern and formidable character but someone who loves her grandson and wants the best for him.

‘I was the last to come through,’ said Mrs. Longbottom. ‘I sealed it, I think it unwise to leave it open now Aberforth has left his pub. Have you seen my grandson?’
‘He’s fighting,’ said Harry.
‘Naturally,’ said the old lady proudly. ‘Excuse me, I must go and assist him’” (DH 624). 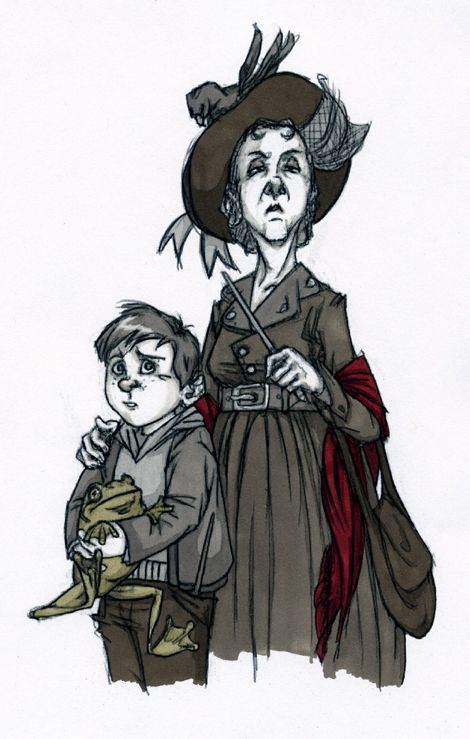 Hagrid isn’t a typical mother, but he is definitely one of the most maternal characters in the series. He definitely loved his creatures and acted like a mother to them. This was definitely the case with Norbert in Harry Potter and the Sorcerer’s Stone. He hatched him, cared for him, and protected him as best he could.

‘Isn’t he beautiful?’ Hagrid murmured. He reached out a hand to stroke the dragon’s head. It snapped at his fingers, showing pointed fangs.
‘Bless him, look, he knows his mummy!’ said Hagrid” (SS 235).

What do you think of these mothers? Let us know in the comments!