The women of the Harry Potter books are complex, diverse, and stunning individuals. As characters, they vary from selfless warriors to manipulative Death Eaters. J.K. Rowling created strong and powerful women, easily some of the most well written in literature. Each is talented in her own way, but what about when they work together? We’re assembling the ultimate girl squad today! These female friendships are well matched, as well as heartwarming and supportive.

Potterheads would love to read more chapters that have Ginny and Hermione together. As the only Weasley girl, Ginny has spent most of her life around her brothers. She doesn’t have many girlfriends, that is, until she meets Hermione. At first, it didn’t seem like the girls had anything in common. Ginny is an athlete, hot-tempered, and an emotional thinker. Hermione is bookish, tends to overthink, and relies on logic.

However, when it comes to what’s important, Ginny and Hermione share the same views. Both of them have a strong sense of right and wrong, and they each are talented witches in their own way. The duo verbally spars with Harry and Ron, and by doing so, Ginny and Hermione show off their smarts every time! Both are headstrong, which once led to an argument over the importance of Quidditch, but their disagreements never come between their friendship. They seem to admire each other, and Hermione probably wonders how Ginny can put up with Fred and George!

Who says sisters can’t be best friends? Despite being in different Houses, these two girls manage to watch each other’s backs and remain on good terms. I remember reading Harry Potter and the Goblet of Fire and being so impressed with how they made sure if one of them were going to the ball, then the other would too. Padma and Parvati are always concerned with each other’s happiness, which is honestly friendship goals. Then at the ball, when Harry and Ron are being rude dates, the girls decide that they don’t need the boys to have fun. They go off and dance with other people. This duo is inspirational!

I will forever wish that this trio weren’t in the background of the series! Alicia, Angelina, and Katie are three Chasers on the Gryffindor Quidditch team. These characters only make a few appearances, yet these girls are brilliant athletes and loyal Gryffindors. Several times in Quidditch matches, the boys on the Slytherin team have tried to knock down these girls, but they never flinched. These girls play by the rules and are fiercely devoted to their teammates. However, they are quick to call out the Weasley twins whenever they are joking around! Angelina has even been known to correct Oliver Wood, their Captain for several years, if he made an error. In the Harry Potter books, there doesn’t seem to be a division between male and female Quidditch players, but there are definitely fewer women on the field. I have always admired that this trio of female Chasers stuck together and never competed against one another.

As readers, we had more chapters with this adorable friendship as the series continued. One of Ginny’s best traits is that she is protective of the people she loves, so she had no tolerance toward other students teasing Luna. Both of these girls have inner strength and loyal natures, which make them lifelong friends. Most of the people Ginny hangs out with are older than her, but luckily, Luna was her own age, so she could have a friend in class.

Despite being in different Hogwarts Houses, the girls make a formidable pair. Both are accomplished witches who look after each other. One of my favorite aspects of their friendship is that Ginny doesn’t mind Luna’s eccentricities. In fact, Ginny believes Luna to be such a good person that she’s worth defending. Later on, Ginny even gives her only daughter the middle name “Luna.” In our eyes, Ginny and Luna are the definition of best friends for life! 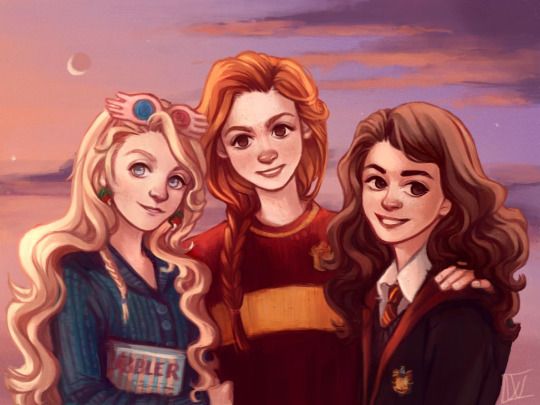 What are some of your favorite Harry Potter friendships? Share them down in the comments!