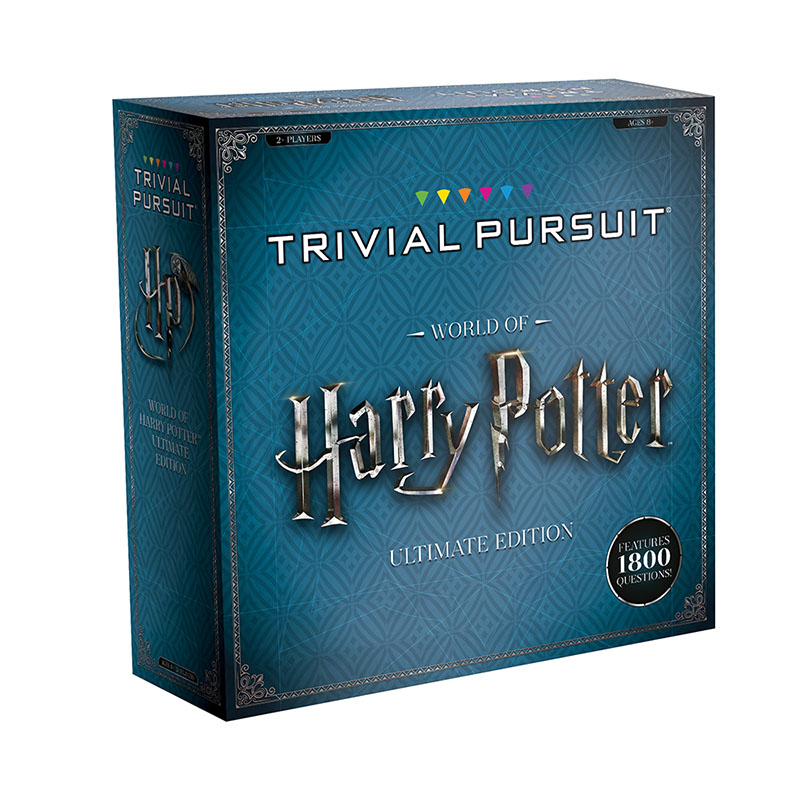 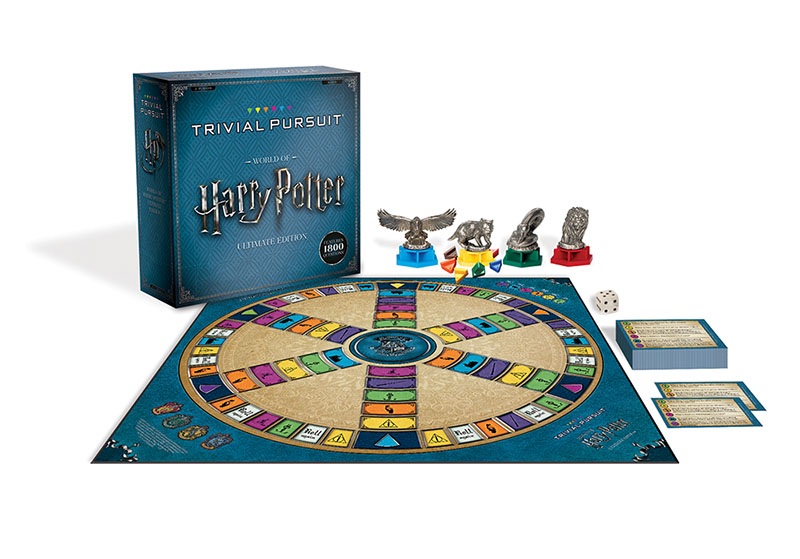 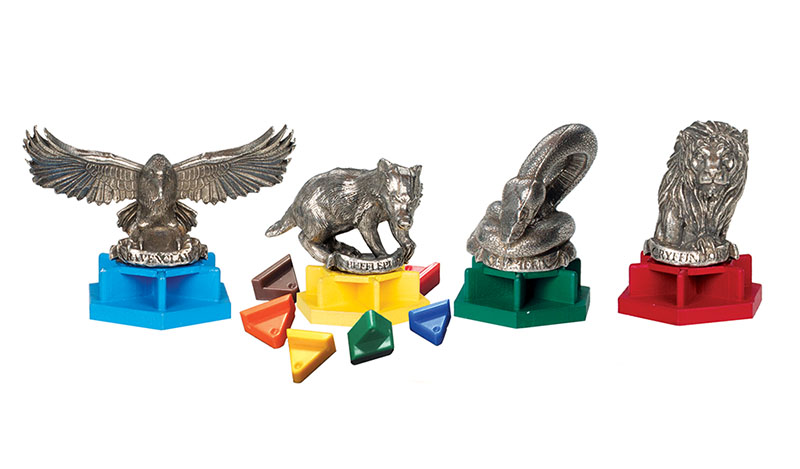 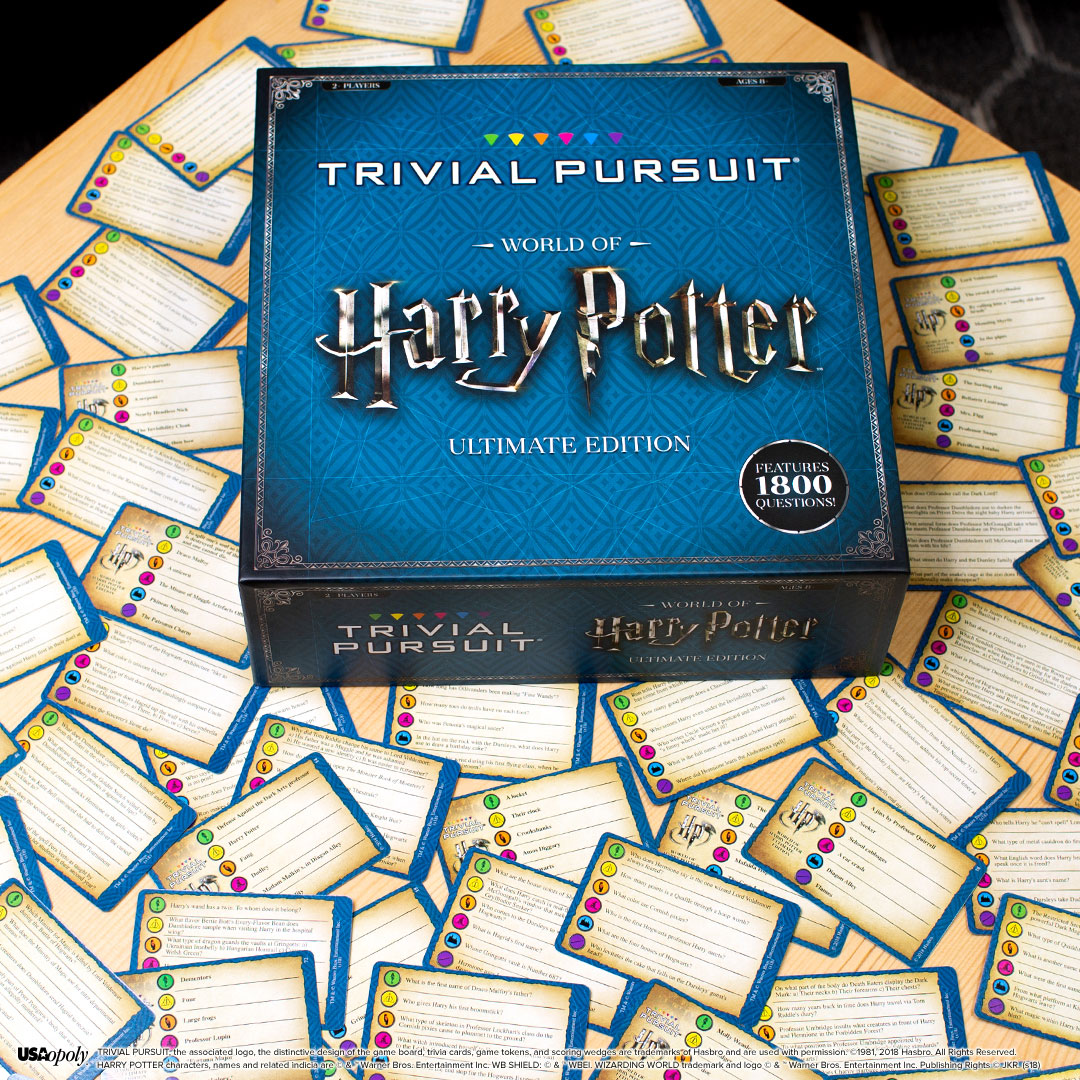 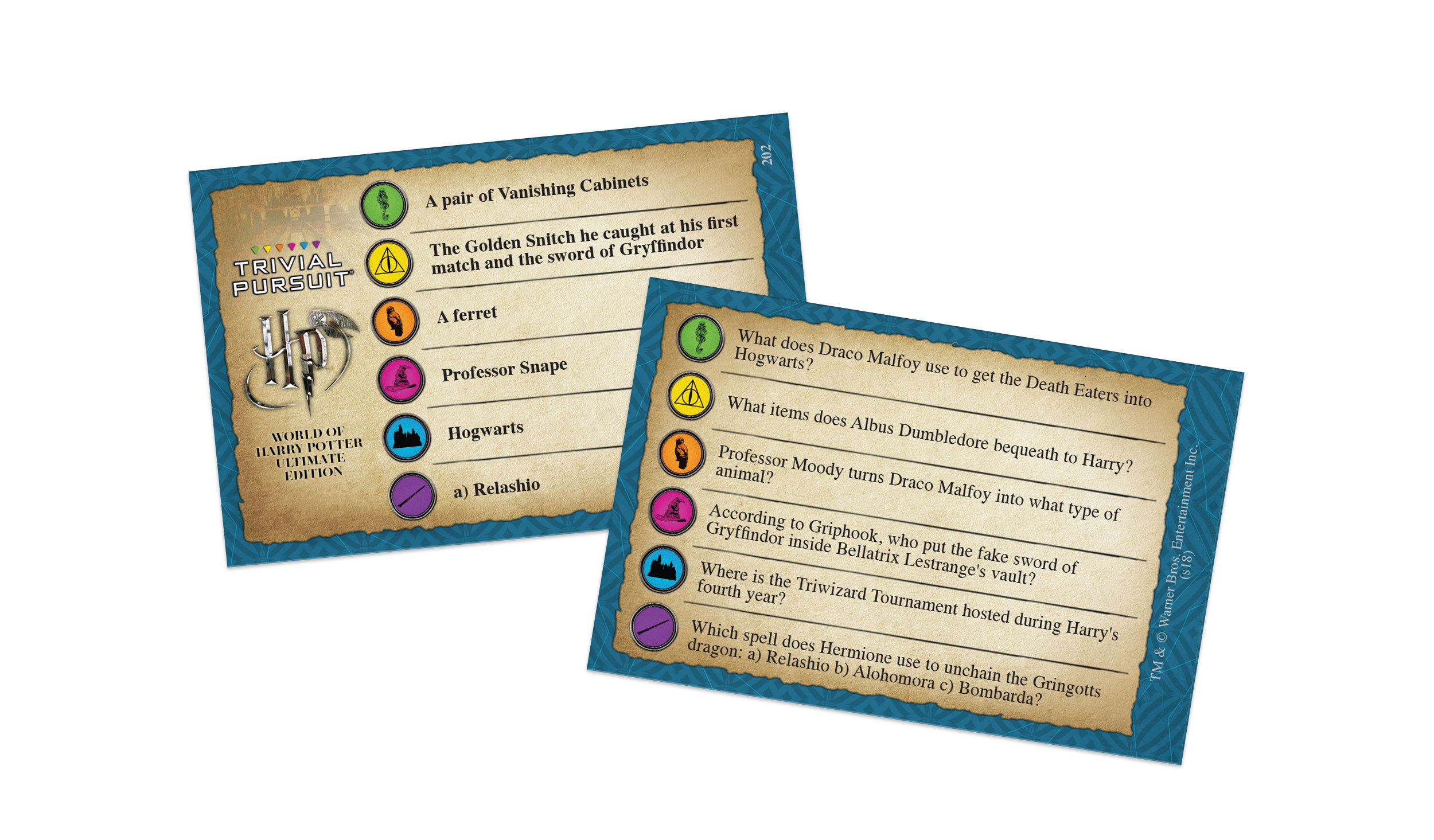 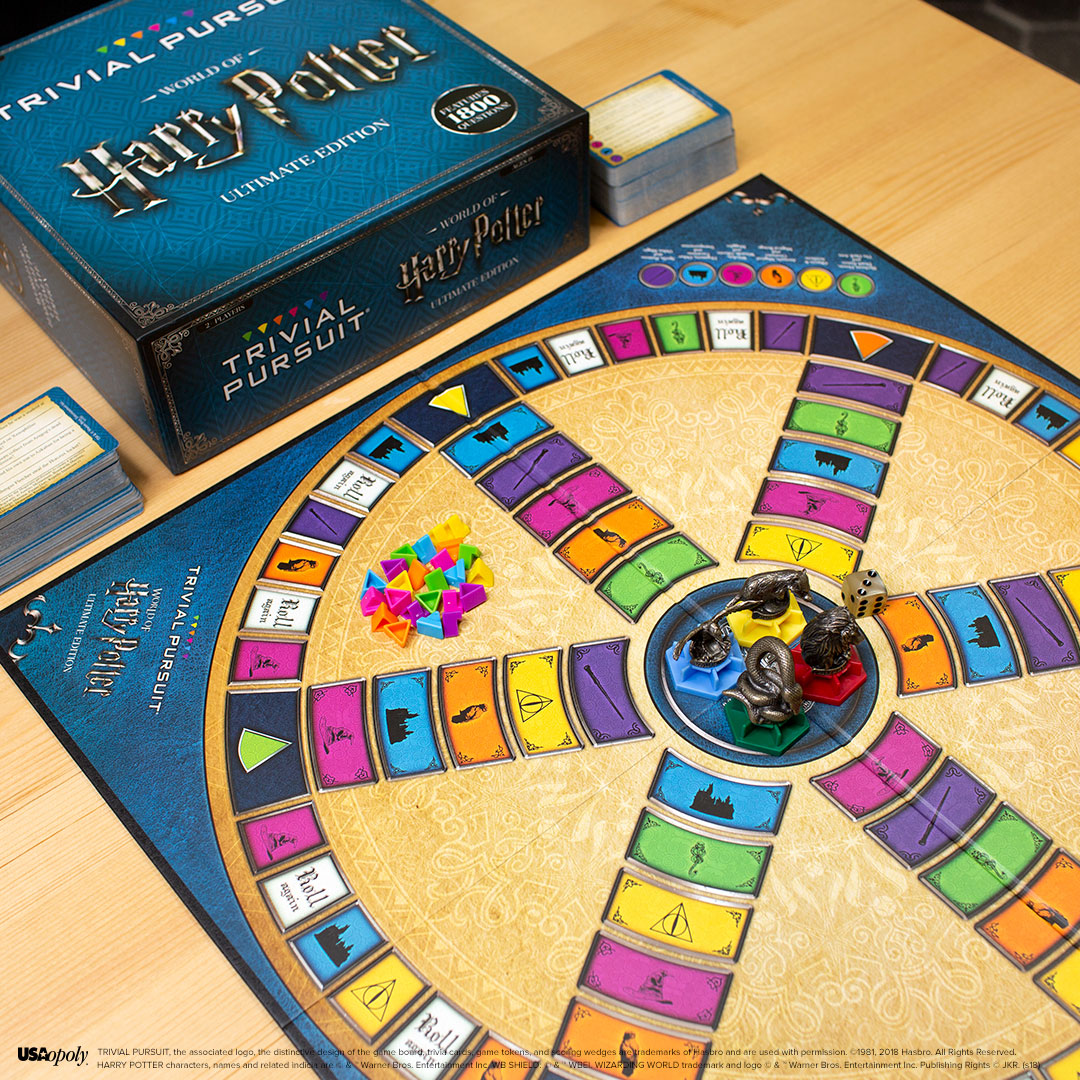 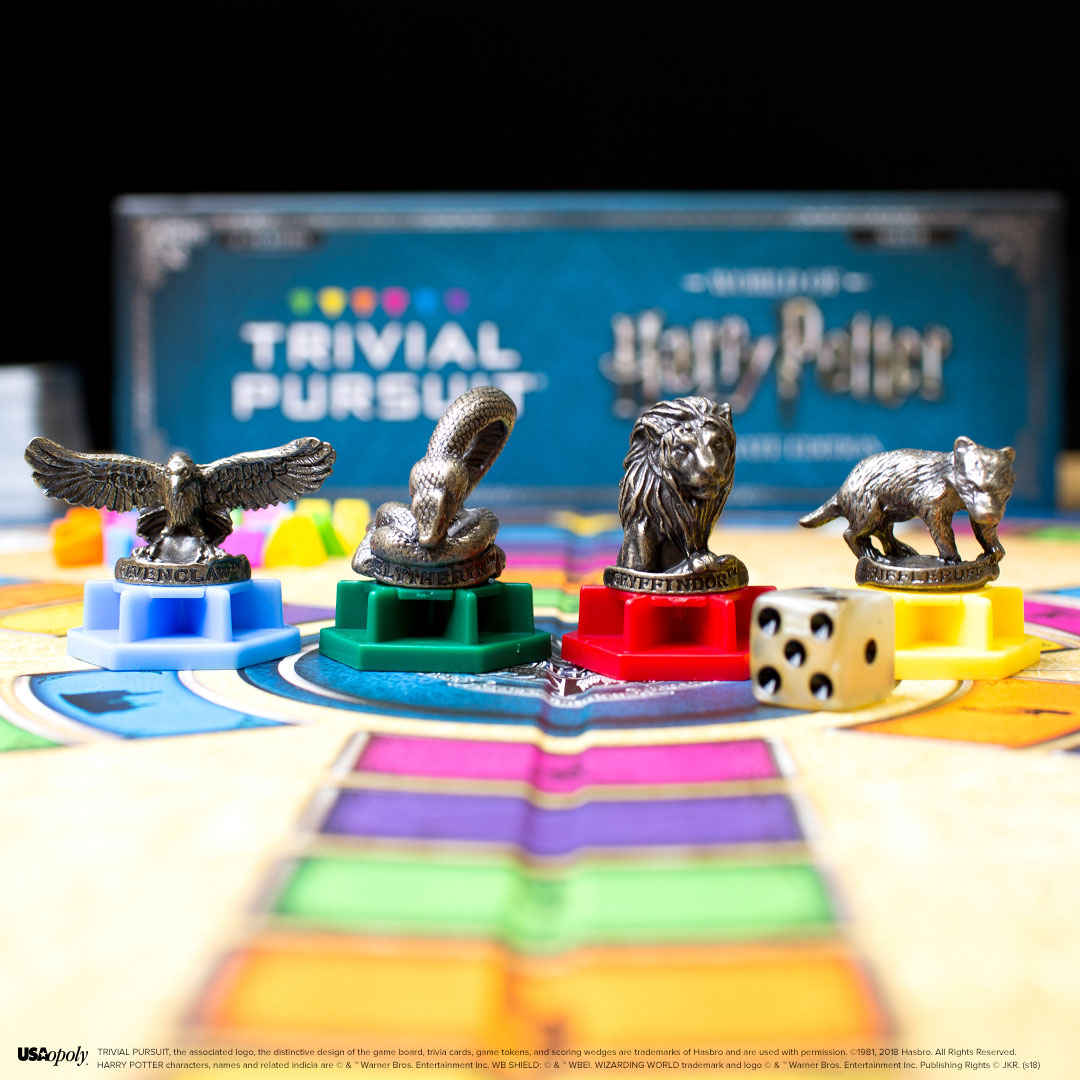 Trivial Pursuit: World of Harry Potter Ultimate Edition is a major upgrade from USAopoloy’s previous version of the game night classic. Whereas before, the players were merely given a colored die and category cards, this is a truly fleshed-out version of the game. The board is beautifully magical, and the play pieces are STUNNING. They are heavy and have a real presence, exactly what you would expect.

The cards, of which there are 1,800, feature six categories: Slytherin House, Death Eaters and the Dark Arts; Objects and Artifacts; Animals, Magical Creatures and Magical Beings; Witches, Wizards, Ghosts and Muggles; Hogwarts, Other Locations and Transportation; and Spells, Potions and Other Magic. My one “whomp whomp” about them is that they do the stereotypical thing and lump Slytherin House in with the Death Eaters and baddies. Hopefully, someone at USAopoly reads this and corrects that error if they do another edition.

As for the questions themselves, some of them are actually tricky! We should note that they are MOVIE based since Warner Bros./USAopoloy own the film rights and not the novel rights. Having said that, quite a few questions actually stumped us when we played. It is well worth the purchase (even more so if you can get it on sale!) and will definitely add a lot of fun to your next Potter game night.

Our staff held a Facebook Live chat with followers last month to put this version of Trivial Pursuit to the test and found that the questions were a bit harder than they originally thought they would be! Take a look below and then read on for our review and giveaway!

Want to win the World of Harry Potter Ultimate Edition of Trivial Pursuit for yourself? All you have to do is enter our contest below! Thanks to our friends at USAopoly, we have six copies of the game to give away! Our contest is open to US and Canadian residents only, starting from September 5 through 11:59 p.m. on September 19. Winners will be contacted via email after the contest period ends, and each winner will have 24 hours to respond or another winner may be chosen.

Can’t take a chance at losing our giveaway? You can purchase the game here!

A copy of Trivial Pursuit: World of Harry Potter Ultimate Edition was provided by USAopoly for review.