Pottermore tells us that the great wizard Merlin was actually a member of Slytherin House! One can’t help but wonder, magical or Muggle status aside, where other characters from the court of King Arthur might have ended up had they attended Hogwarts. Let’s travel back in time to an era of myth and magic to imagine the Sorting Hat being placed on the heads of some legendary figures…

King Arthur forms the Round Table and creates its code of chivalry, setting out rules of honor for knights who previously fought without regard for ethics. He is a leader who seeks glory and adventure but also wishes to establish a moral sense of law and order. Better be… Gryffindor! 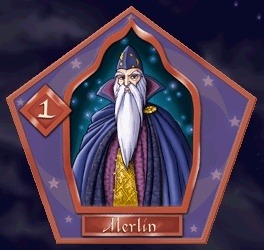 According to Pottermore, Merlin is a Slytherin, and it works. While Ravenclaw might seem the more obvious choice when comparing his intellect to the knights’ physical prowess, he stealthily uses his knowledge and magic to help Arthur conquer and rule. He’s strategic and knows when to stop Arthur from fighting in order to make valuable alliances and achieve stability.

The fact that Lancelot is recognized as the best knight makes him seem like a Gryffindor, but his desire and ability to covertly continue an affair with Guinevere shows a Slytherin level of cunning. He orchestrates clever plans and lies to get into her bedroom and deny it. He’s ambitious in love, war, and religion in his desire to attain the Grail. Between temptation and wiles, he belongs with the serpents.

Guinevere is a tough one because her portrayal changes radically across sources and she rarely gets much in-depth character development. She’s mostly known for her illicit affair with Lancelot, and while she might seem to belong in Slytherin with him for her part in their deception, Malory praises her for being a true lover whose passion for Lancelot never wavers. She speaks her mind and does not tolerate being pushed around, censuring Lancelot when he falters in his affection for her, rebuking Sir Meliagaunt for attacking her knights in his attempt to abduct her, and barricading herself in the Tower of London to escape Mordred’s clutches.

No one is more desperate for glory than Gawain. The quest for the Holy Grail is his idea, but he doesn’t achieve it because he’s too rash and violent. He’s loyal, passionate, and skilled in battle, but also reckless. Gryffindor!

Agravain and Mordred are both schemers who plot Lancelot’s and Arthur’s downfalls. They pretend to be trustworthy followers of the king, trying to protect his legacy and uphold the law, but they’re really looking to cause trouble. Mordred gets temporary rule of Britain in Arthur’s stead and uses that power to attempt to take his queen and kingdom. Slytherin for these two!

Gareth disguises himself when he comes to Arthur’s court because he wants to become a knight based on his deeds rather than his name. He’s determined to prove himself and win renown through hard work rather than because he is the king’s nephew. His respect is similarly earned through action since he admires Lancelot for his skill and kindness while distancing himself from Gawain due to his violence. Gareth’s sense of fairness, willingness to work hard, and loyalty to Lancelot make him a Hufflepuff.

Galahad is quite literally too good for this world. He’s so pure that he’s one of only three knights who successfully achieve the Holy Grail and his reward is departing from this plane of existence where all the sinners live so that he can ascend to the heavens. He is a beautiful cinnamon roll and textbook Hufflepuff.

Morgan is undoubtedly wise, but in Thomas Malory’s Le Morte d’Arthur, she mostly uses her magic to get her way and harm her royal brother. She does appear to heal Arthur at the end, but throughout the text, she serves as an antagonist who devises clever ploys to take what she wants. While earlier versions of Morgan depict a more Ravenclaw-like, benevolent healer, the Morgan of Malory and other late medieval texts belongs in Slytherin.

Also known as Nenive, Nyneve, and Viviane, among other names, the chief Lady of the Lake is often responsible for helping the Round Table with her magic. She returns Excalibur to Arthur when Morgan steals it, reveals the truth of the poisoned apple for which Guinevere is falsely accused, and is one of the enchantresses who bring Arthur to Avalon to heal his fatal wounds. Nimue’s appearances in Malory often signal shifts in chivalry and require characters to rethink their violence. She is primarily known for her wisdom, so she’s going in Ravenclaw.

Many different versions of the Arthurian legend exist, so the Sorting could certainly shift based on different interpretations of the characters. Where would you put the inhabitants of Camelot?