Entertainment Weekly has been slowly releasing Fantastic Beasts: The Crimes of Grindelwald material from its coverage of the film in its latest magazine edition. The cover story is packed with exciting information – like this interview with Johnny Depp, who had yet to speak about his role in the film – and never-before-seen photos from the film.

Ten new Crimes of Grindelwald images from EW reveal several interesting tidbits of information in their capture of subtle details. Newt, obviously in love with Tina (he has a newspaper clipping of her Auror promotion in his case – AWW), has a London workshop with a kind of creepy basement (look at those red cloaks and gas masks behind him). Obviously, it is meant to be a sanctuary for magical animals, but it is a bit dark.

As if we weren’t told that this next installment in the Fantastic Beasts series was going to take a dark turn, a lot of locations in the new images involve graveyards. After all of the trailers and pictures that hint at Grindelwald’s massive meetings in an amphitheater, we finally know exactly where these meetings are located – underneath the Lestrange mausoleum. Letting someone use your family’s burial space seems pretty personal. Leta has some explaining to do.

Newt and his brother must eventually catch on to this dark hiding spot, with one of the photos revealing Newt and Theseus drawing their wands in an eerily misty Père Lachaise Cemetery. We noticed that Leta was not with them, though we’re assuming that’s where her family mausoleum is.

Speaking of Leta Lestrange, she is one of the adults in the film who takes a trip back to Hogwarts. In a very emotionally packed photo, Leta is seen gently tracing an “L+N” that is carved into her old school desk. She seems to miss her once-close relationship with Newt. The feels… We’ve all been there, Leta.

We feel okay for Newt, though. He has moved on, and we know how great a team he and Tina make. In one of the new photos, the pair is seen snooping around the dark corridors of the French Ministry of Magic records room. The ominous tone is almost palpable.

Another familiar name from the Potter films has appeared once more – a Rosier. Fans may recall that the Rosier family had ties to Voldemort in the Potter books and films. It seems that Vinda Rosier starts the family tradition by aligning herself to Grindelwald. She is pictured presenting a skull at a Grindelwald gathering. That’s not creepy at all!

Take a look at these beautiful new pictures below. Fantastic Beasts: The Crimes of Grindelwald hits theaters November 16. We’re still a month away and can’t wait! Which of these photos and accompanying jewels of information surprised you the most? Let us know in the comments. 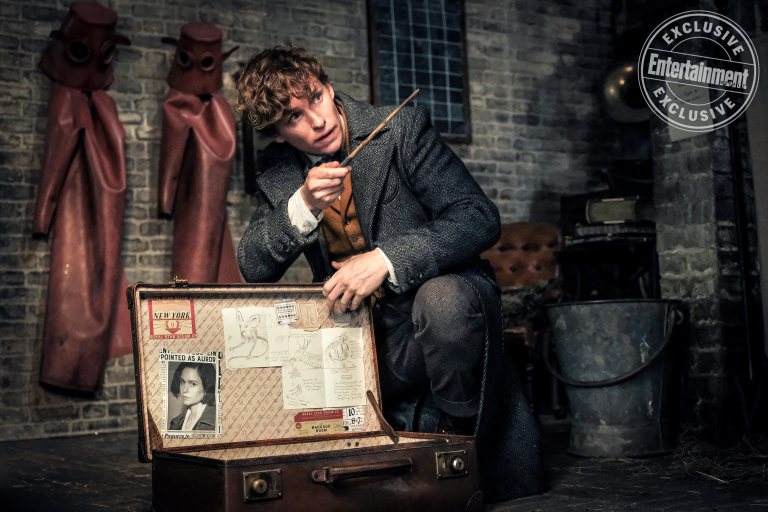 Newt woos an animal into his case in the basement of his London workshop. 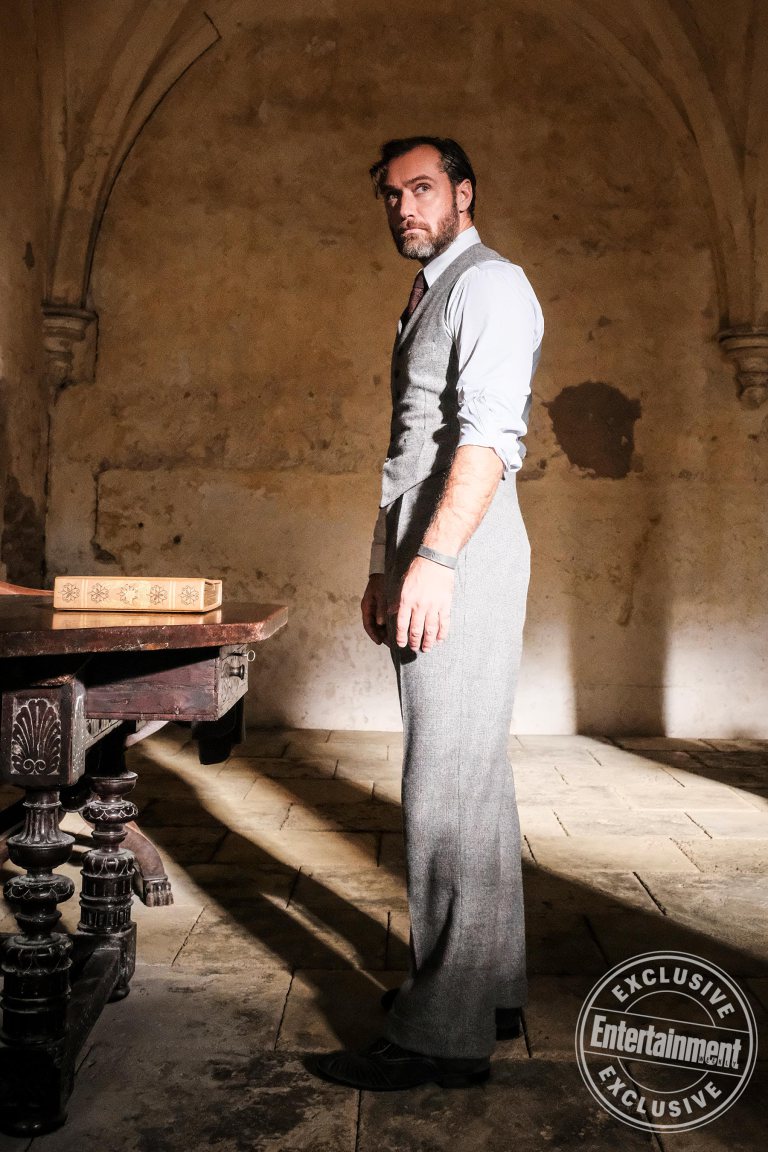 Dumbledore looks defensive in his Defense Against the Dark Arts classroom. 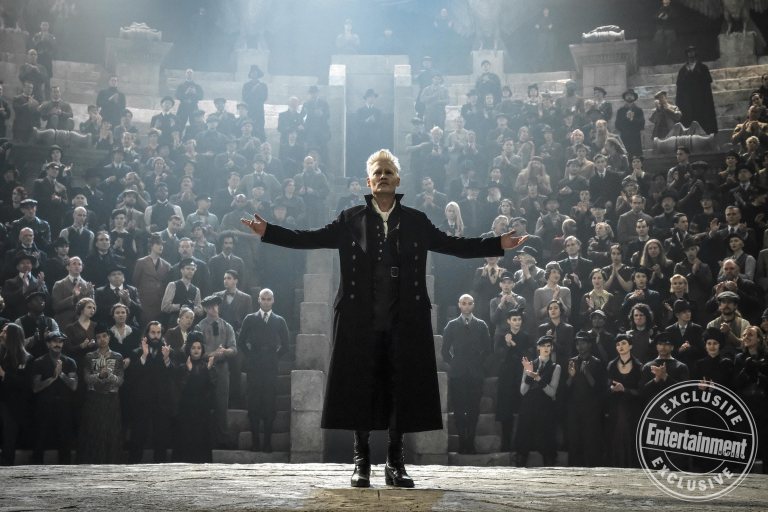 Grindelwald is holding his mass meetings in an amphitheater beneath the Lestrange mausoleum. 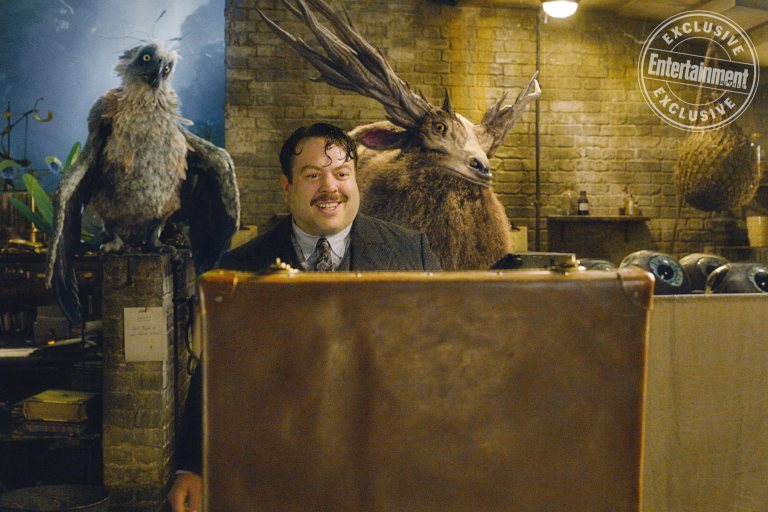 Jacob has made some new beastly friends – one is called a Leucrotta. 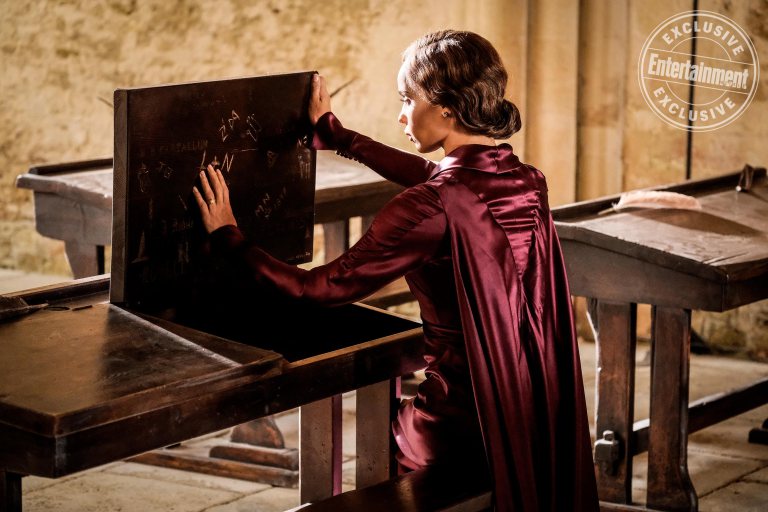 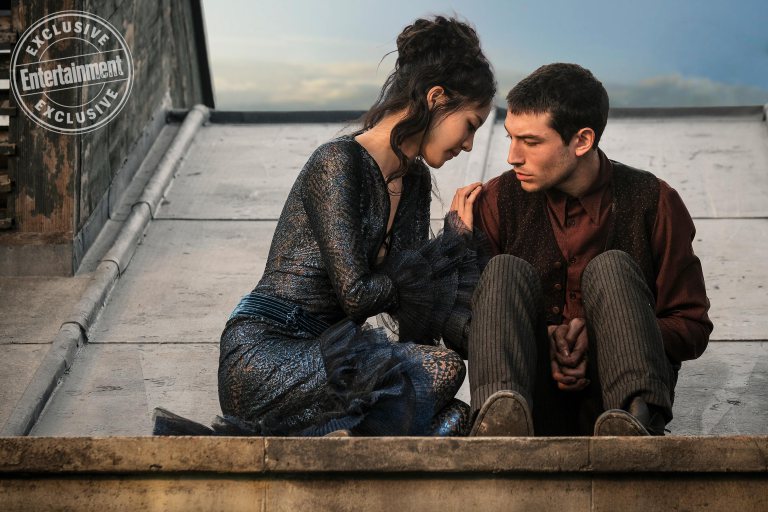 These two circus performers and cursed friends (the Maledictus and Credence) team up together in Paris. 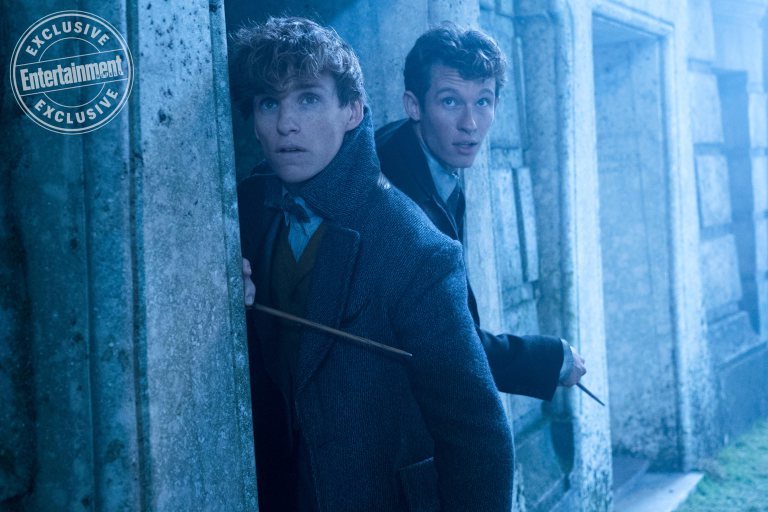 Newt and his brother prepare for combat at Père Lachaise Cemetery. 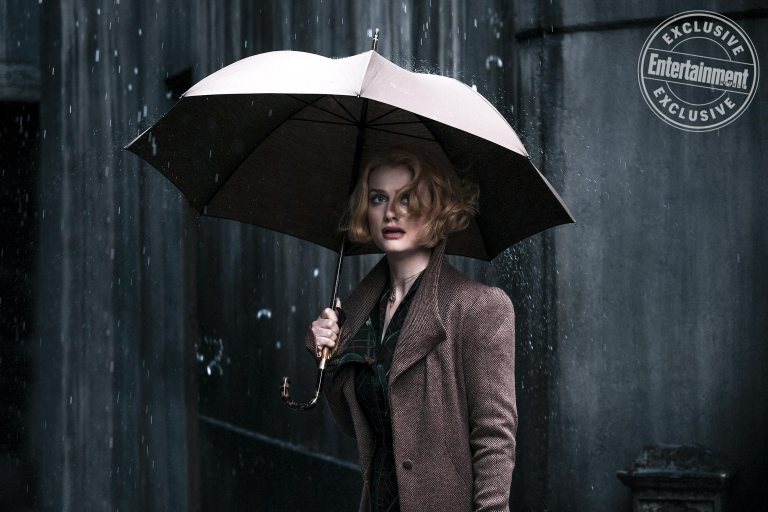 Queenie apparently has “a mysterious purpose in Paris.” 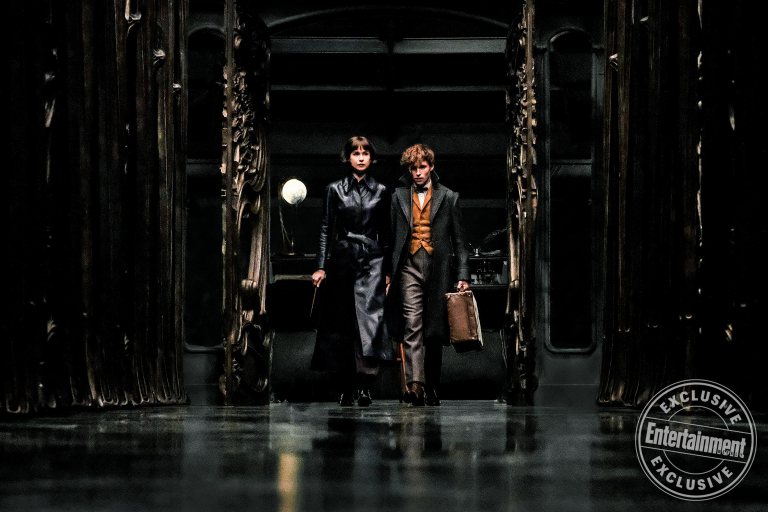 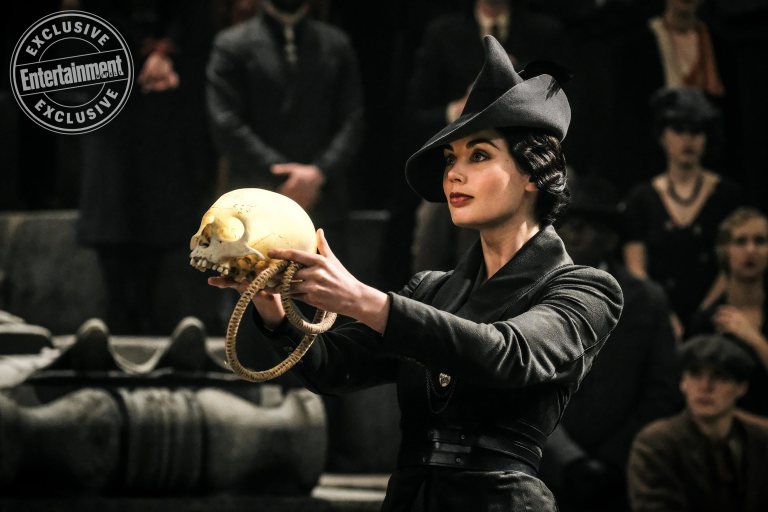 Vinda Rosier presents a gift to Grindelwald – perhaps starting her family’s long line of affiliation with the dark side. 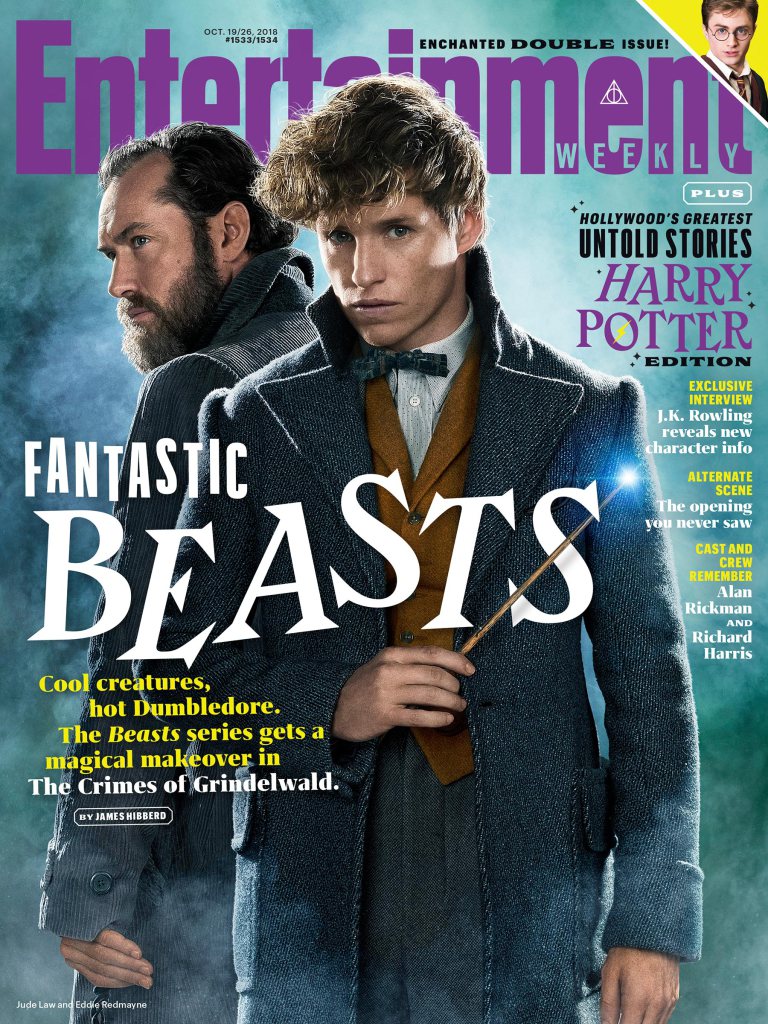 This special edition of EW hits stands this Friday, October 12!