The Harry Potter Illuminated Village Collection from The Bradford Exchange caught my eye last Christmas season, as it will be a perfect addition to all my other Christmas decorations. Collecting the various Hogsmeade Village buildings and seeing them light up and sparkle not only sounds magical but, when you see, it is magical!

The second set in the series, “HONEYDUKES™” Sweet Shop with a free “RON WEASLEY™” is beautifully hand painted with glittery snow on the rooftop, around the base, on the light-up tree, and at the base of Ron’s feet. The large tree attached to the side sparkles with lights, and the windows of the shop glow. There are windows on all sides for a beautiful display, no matter what direction you’re admiring the collection from. Ron Weasley is the perfect character to accompany the Honeydukes shop, as he reminds me of all the fun, sweet treats I’m going to be baking come Christmastime. Yum! The “RON WEASLEY™” figurine is undoubtedly “Ron,” with his own glittery snow-covered base. Even though he is oversized in comparison to the Honeydukes shop, he is well done. 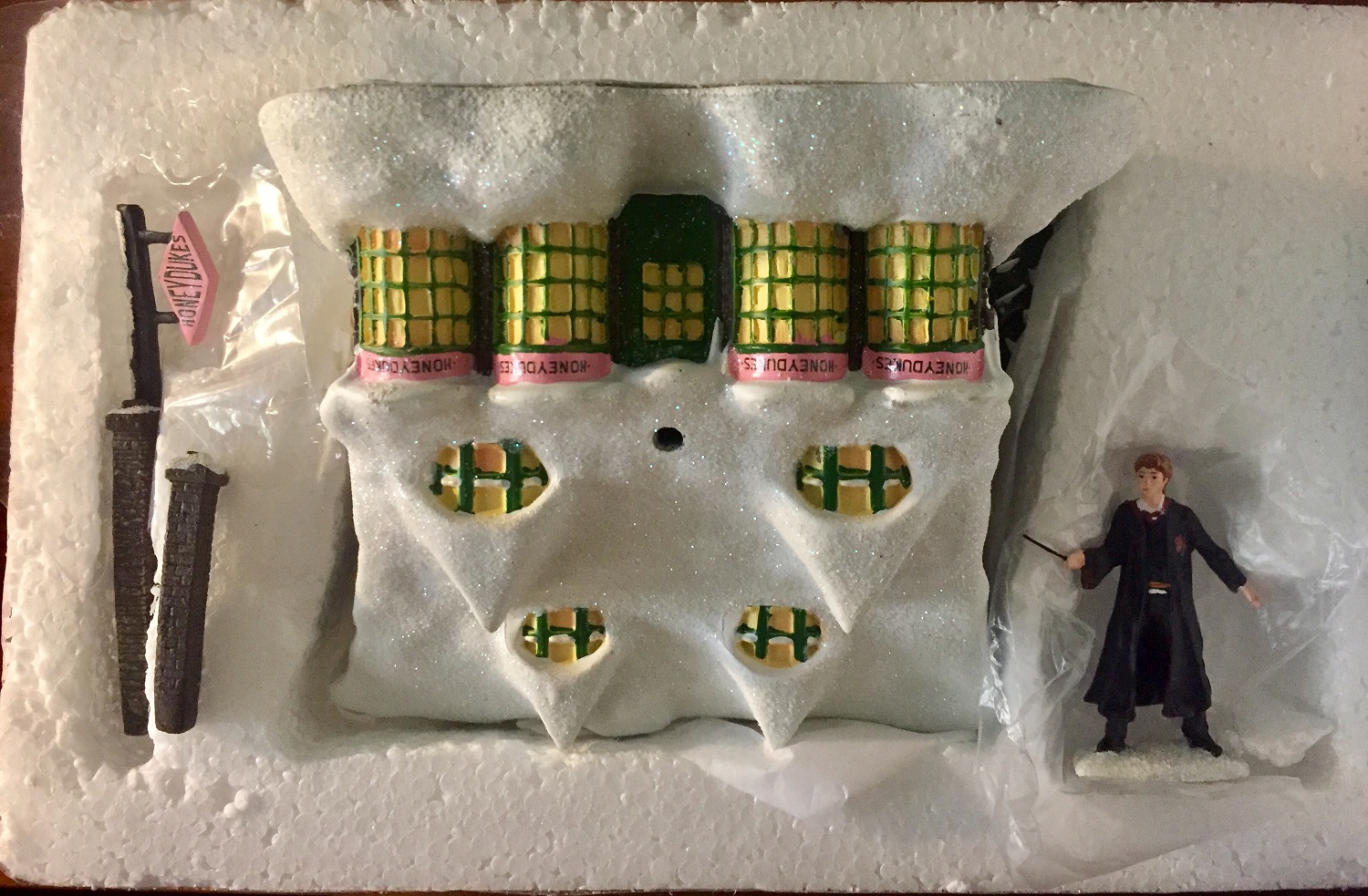 The Bradford Exchange “HONEYDUKES™” with “RON WEASLEY™”, in their protective packaging. 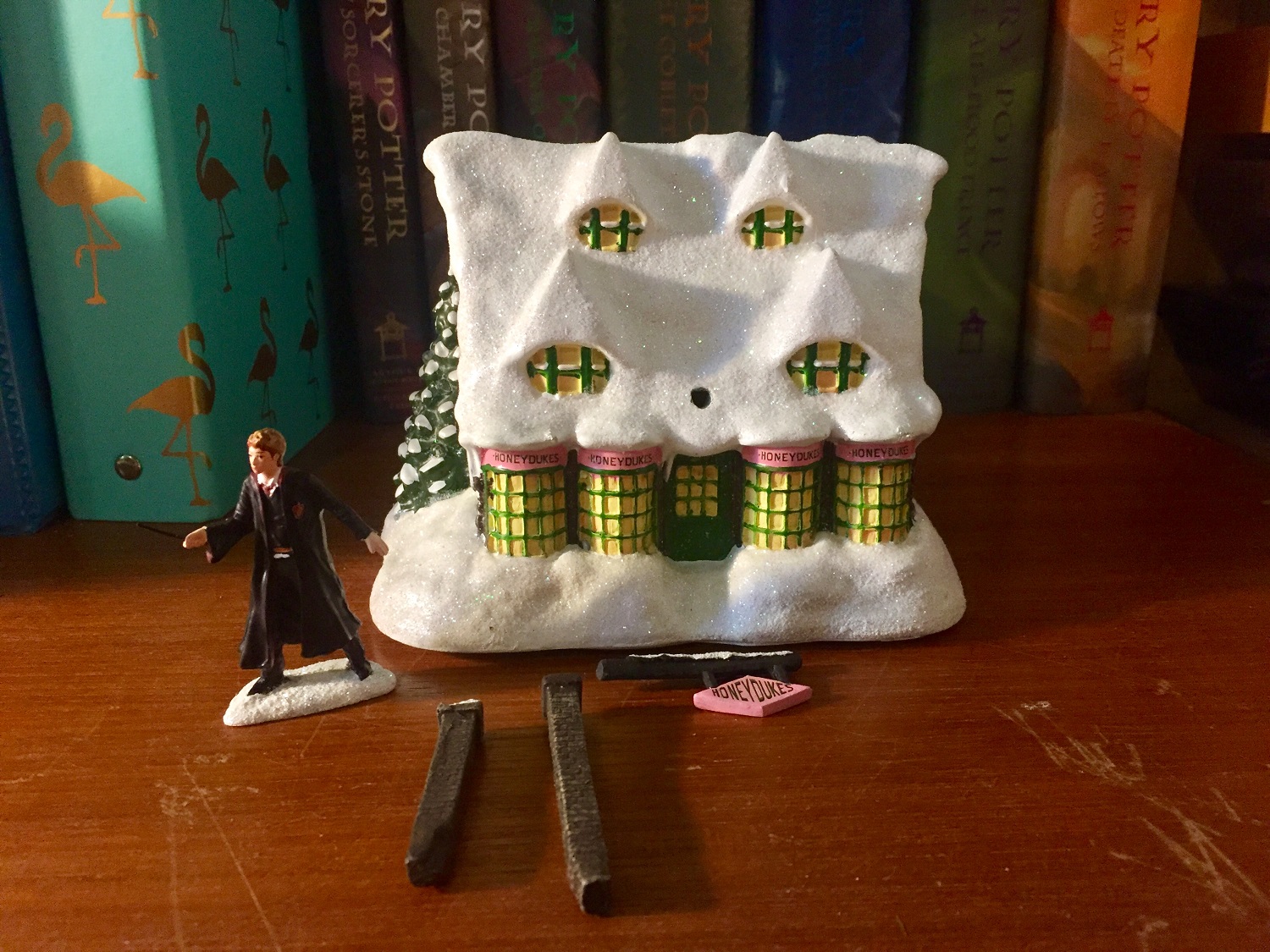 The Bradford Exchange “HONEYDUKES™” with “RON WEASLEY™”, not yet assembled

There are three pieces that easily fit into place, the two chimneys and the Honeydukes sign. On the bottom of the Honeydukes shop is a battery compartment, which needs a tiny little screwdriver or something similar to open it, as well as three AAA batteries. Otherwise, it is easily assembled and the batteries put in place to enjoy a cozy, lit “HONEYDUKES™” Sweet Shop. 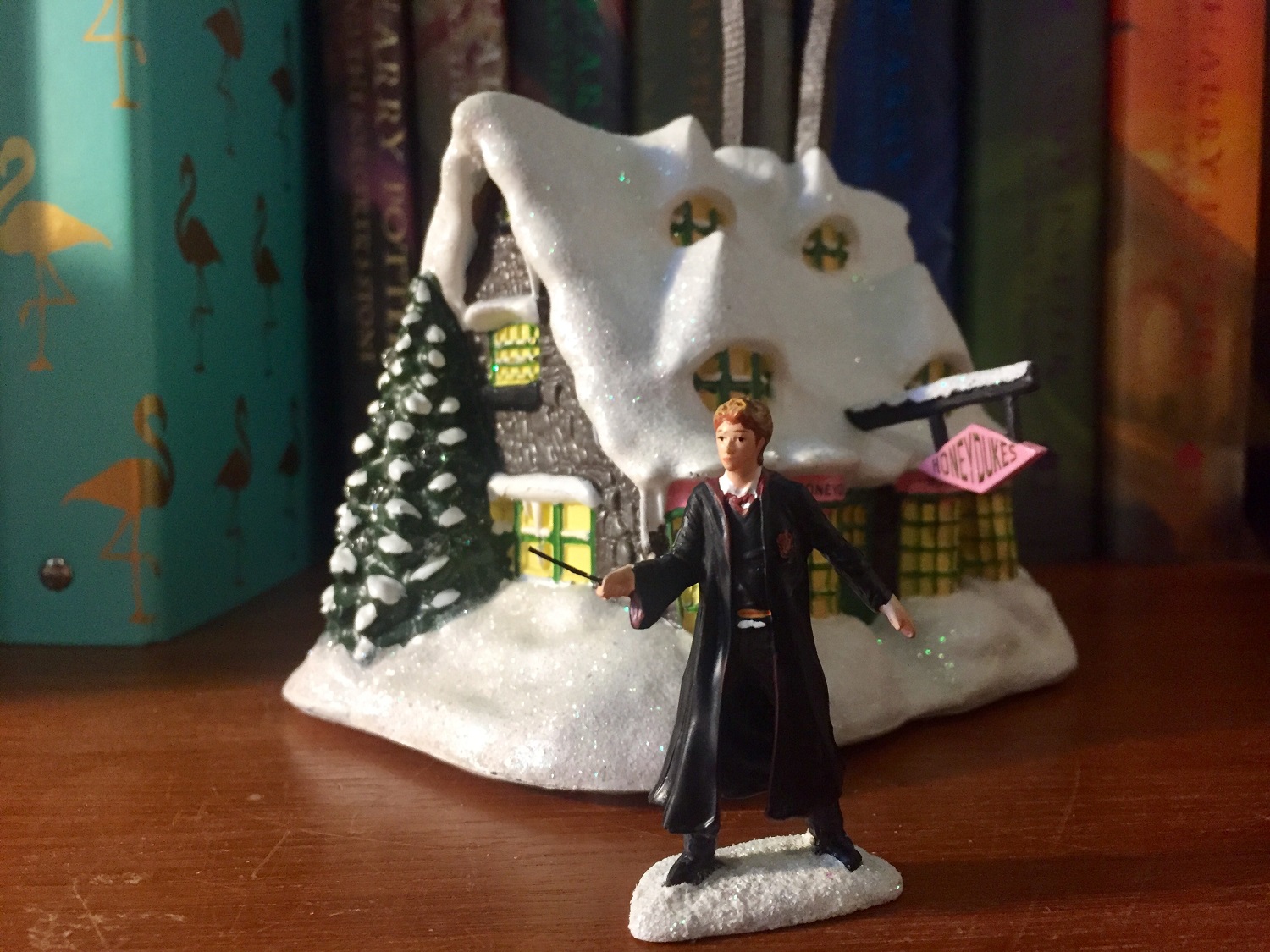 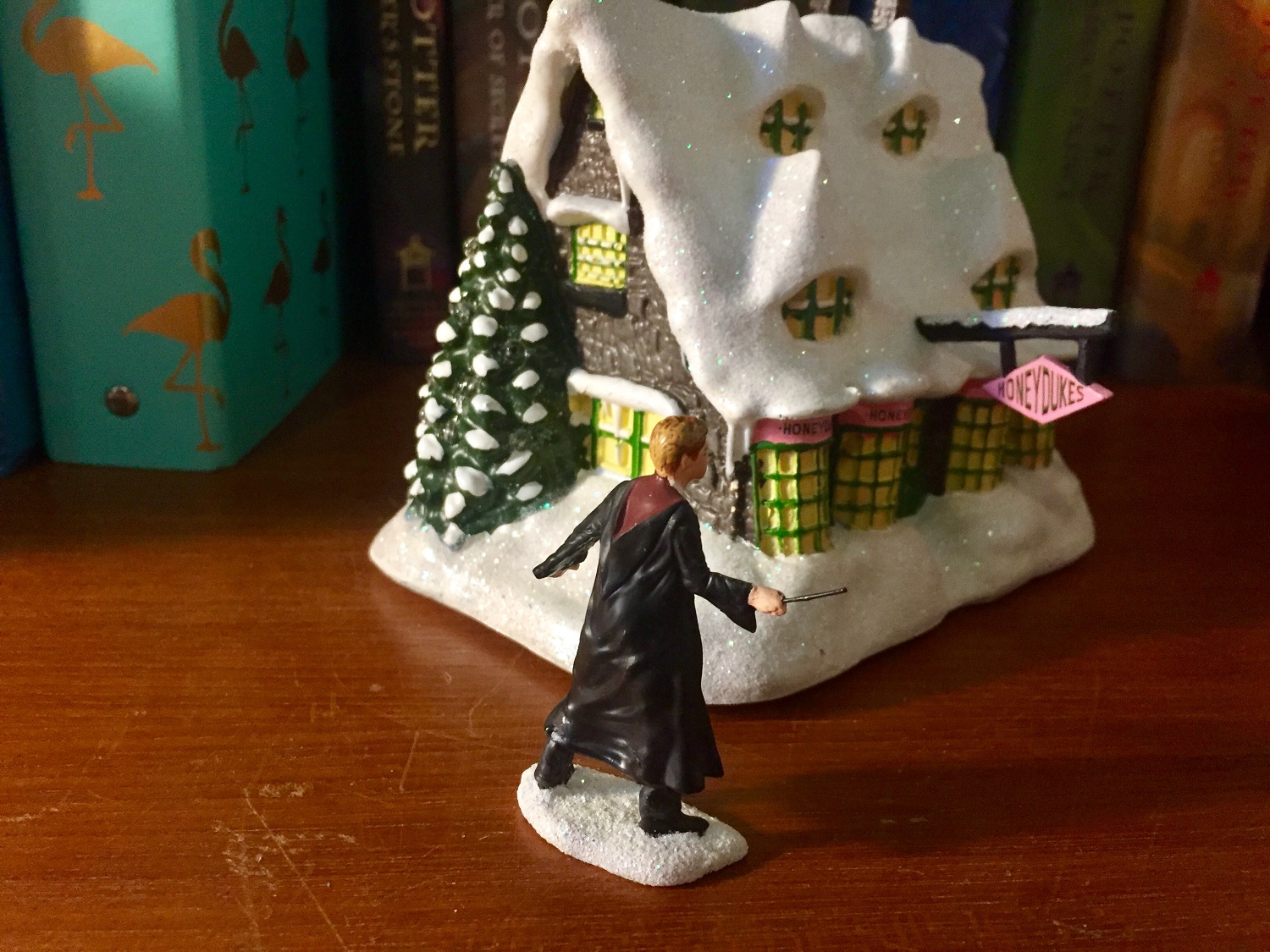 The Bradford Exchange “HONEYDUKES™” (side view) with “RON WEASLEY™” (back view), showing the glittering snow details of the roof and base of the figurine. 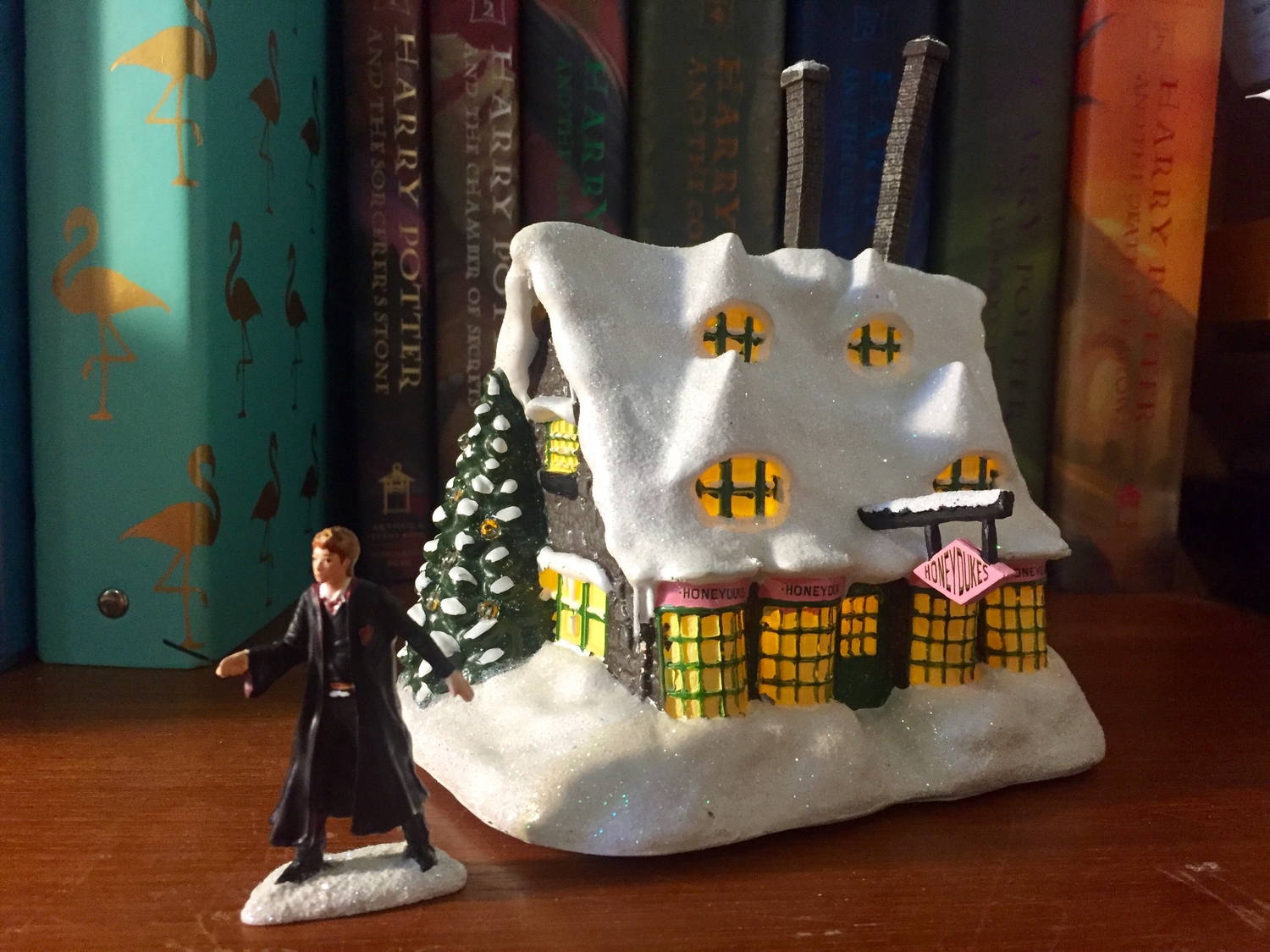 The Harry Potter Illuminated Village Collection from The Bradford Exchange will definitely become a beautiful and magical collectible item, and as a fan of the Harry Potter series and light-up village collections, I will need to start hunting down the first set of the series and start collecting the rest. They are all going to look so magical together and give off warm and happy feelings during the Christmas season. I, for one, will be looking forward to seeing Hogwarts Castle, the Hogwarts Express train and station, and Hermione! 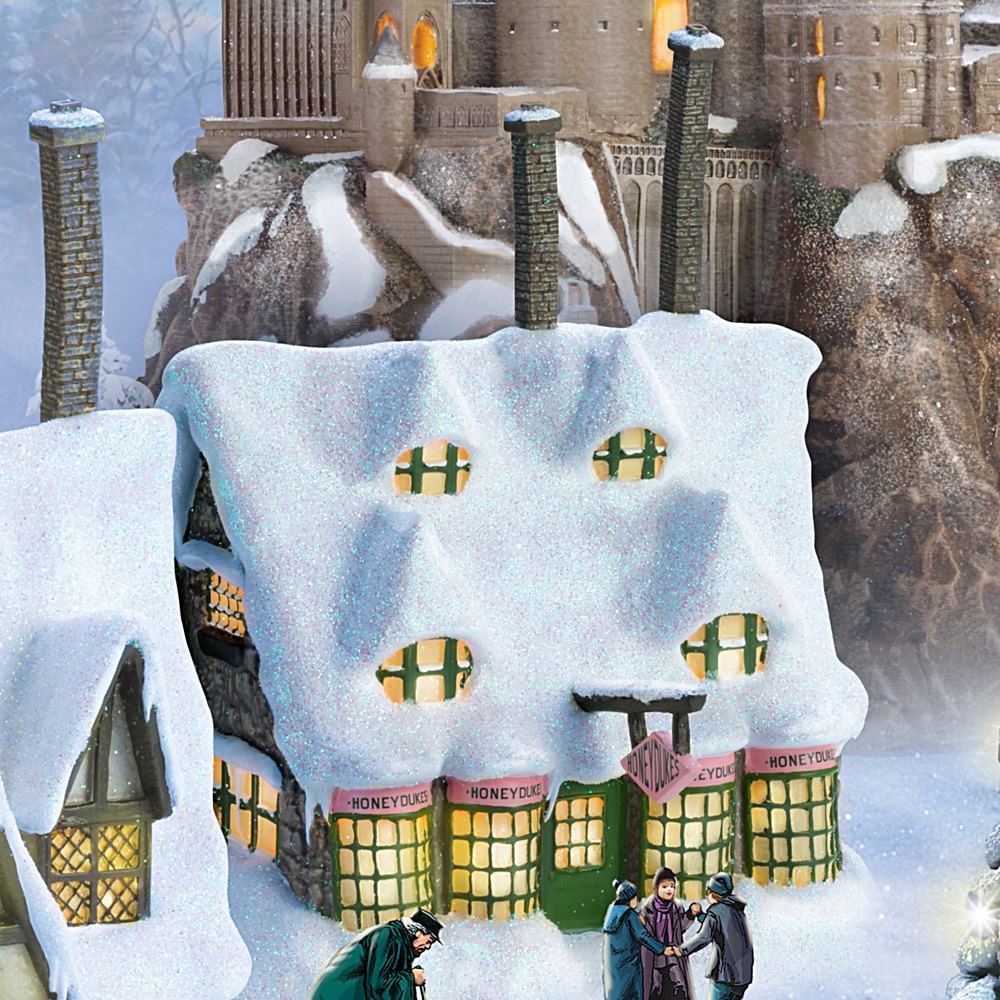 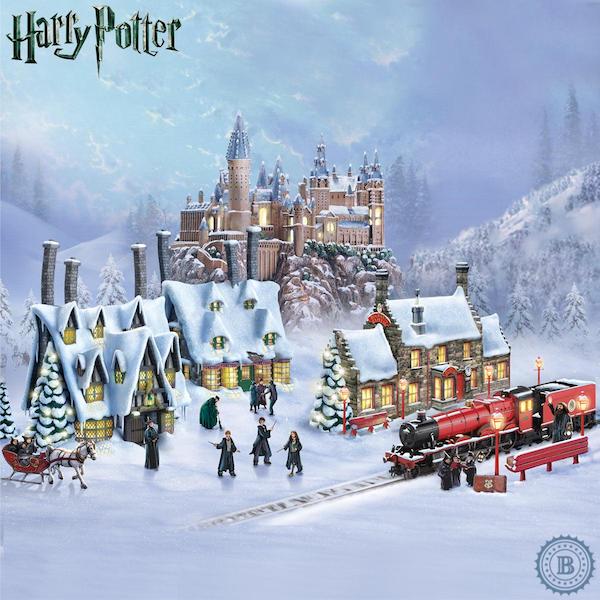 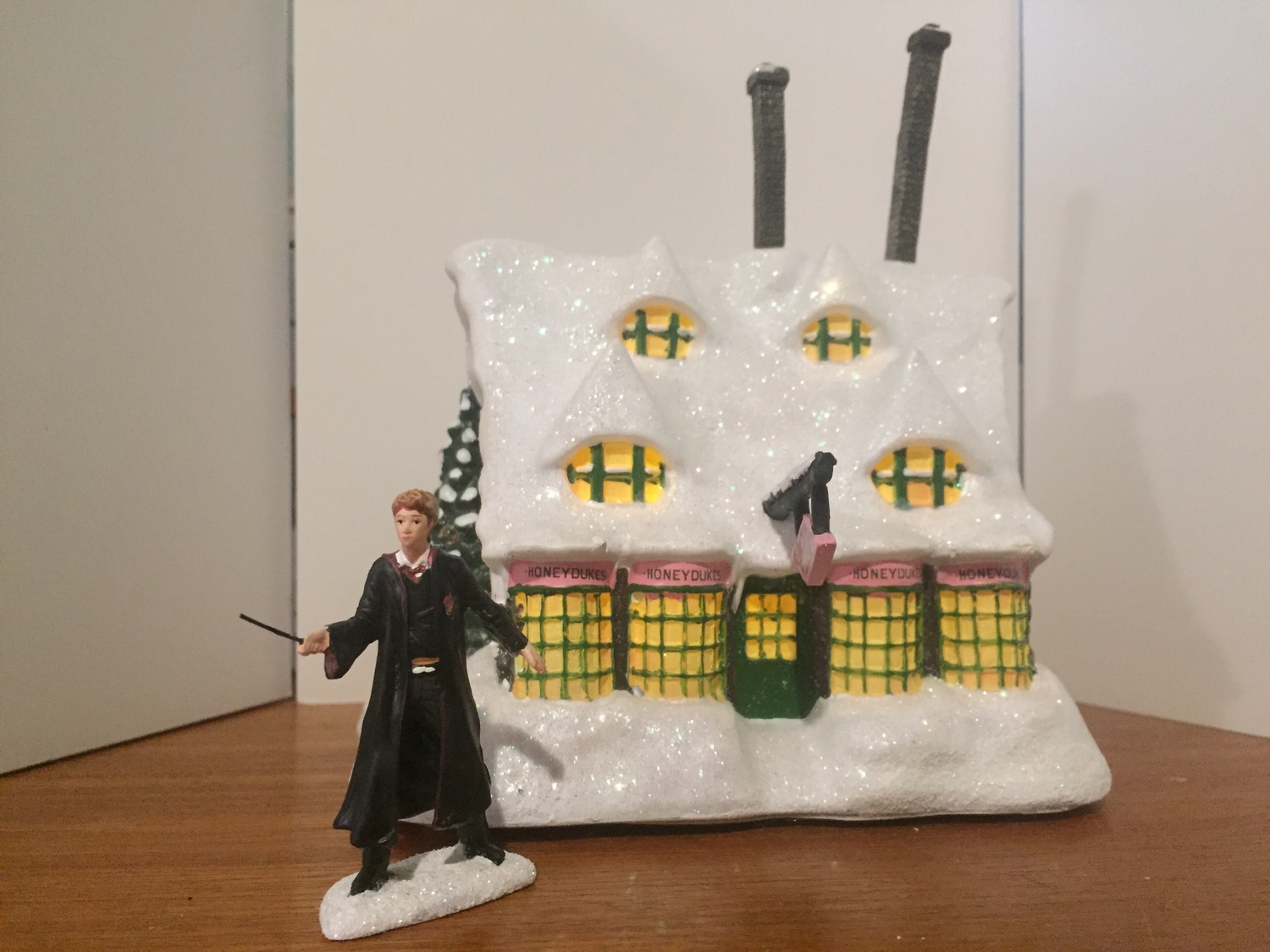 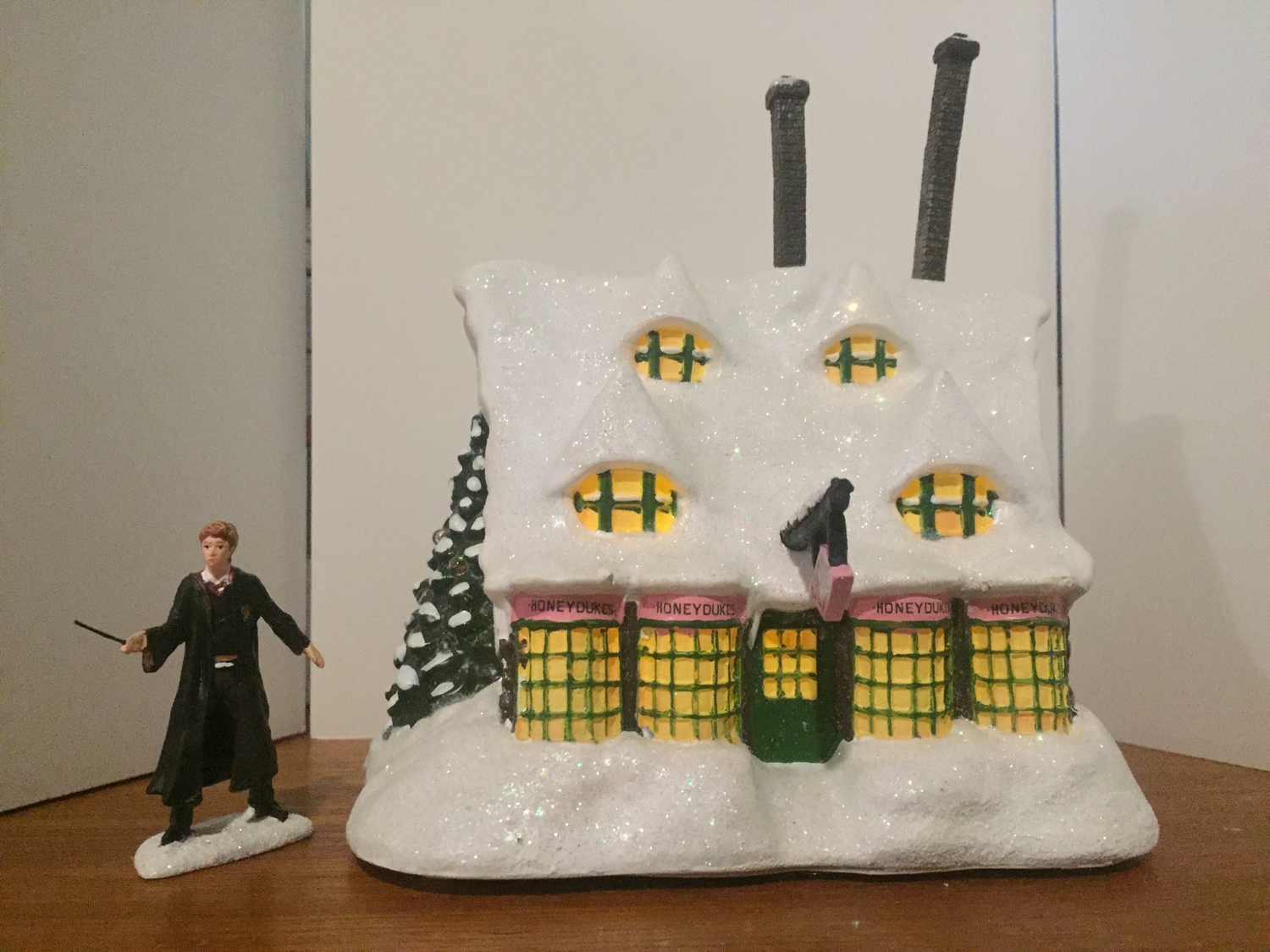 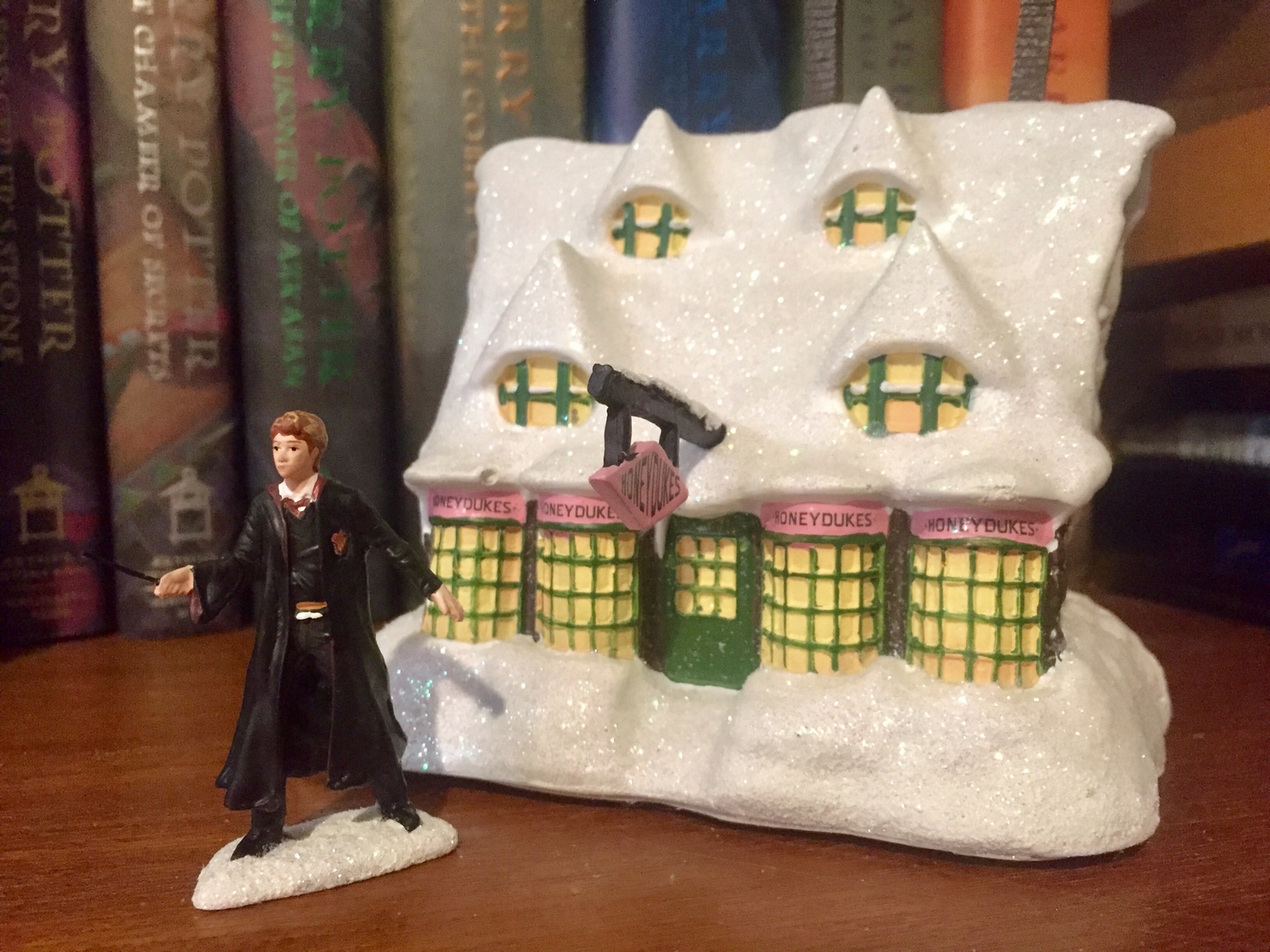 We know you want to take home this amazingly magical “HONEYDUKES™” Sweet Shop and “RON WEASLEY™” figurine, so make sure to enter our contest for your chance to win! Our giveaway is open to residents of the United States and Canada only at this time.

Currently, there are five announced sets in the Harry Potter Illuminated Village, with more issued each month. As a collector subscribed to The Bradford Exchange’s subscription plan, the entire Illuminated Village collection is reserved for you, which means regular deliveries of each new set and no increase in price! New sets are billed and shipped separately approximately every other month, once your previous bill has been paid in full, and you can cancel your plan at any time with no obligation. Here are the five sets that have been announced so far:

We have three sets of the “HONEYDUKES™” Sweet Shop with a free “RON WEASLEY™” figurine to give away. Our contest starts on April 5 and will end on April 19 at 11:59 p.m. ET. Winners will be contacted via email after the contest ends and will be given 24 hours to respond and claim their prize. If no response is received within that time frame, another winner will be chosen, so make sure you are checking your spam and junk folders in case our notification email goes astray!

A review set of the Harry Potter Illuminated Village “HONEYDUKES™” Sweet Shop with a free “RON WEASLEY™” figurine was provided to MuggleNet by The Bradford Exchange. All opinions belong to the reviewer.