Castium Revelio: A Whole Lot of Lovie and Spilling the Tea

Which of your favorite Harry Potter alumni would you present with an award called a Lovie? The winner of the 2019 Lovie Special Achievement Award was probably exactly who you’re thinking, but you can find out for sure below. Plus, we’ve got a first trailer this week for the animated feature Scoob!, Robert Pattinson talking The Lighthouse with Seth Meyers, and Helena Bonham Carter spilling the tea on Daniel Radcliffe. In a very English way, of course. Sip, don’t slurp… Castium Revelio!

We can't think of anyone more suited to receive an award called a Lovie than Evanna Lynch (Luna Lovegood). The Lovie Awards recognize European online excellence, and Lynch recently received a Lovie Special Achievement Award for the use of her social media platforms to promote veganism and environmental health.

Lynch deftly leverages her massive following to share and promote meaningful and important content around veganism and to break traditional barriers to adopting that lifestyle. Whether with KinderBeautyBox or her podcast, 'The ChickPeeps Vegan Podcast', Lynch devotes her online presence to changing people's perceptions of veganism and to introduce much-needed vegan products into the too-often-unethical world of skincare and beauty. In doing so, Lynch raises the bar for others in a position of fame to use the Internet in the most creative and accessible ways possible, to introduce new ideas to people that can truly change our world for the better.

You can check out Lynch's adorable acceptance video below.

It's been nearly a year since MuggleNet gave you a look at the first trailer for The Death and Life of John F. Donovan, starring Sir Michael Gambon (Albus Dumbledore) as the Narrator (Man in Restaurant). Back then, the film had no release date scheduled in the United States, but with a December 13 premiere now on the horizon, a new trailer has been released, which you can view below. The star-studded film also features Kit Harington, Natalie Portman, Susan Sarandon, and Kathy Bates.

Gary Oldman (Sirius Black) is the sort of actor who's open to projects on any platform as long as he believes in the role, and Variety says Oldman will next be taking his talents to Apple TV+ for a starring role in Slow Horses. There's no release date as yet for the small-screen adaptation of Mick Herron's novel, but we'll keep you posted. In the meantime, here's a synopsis:

The show follows a team of British intelligence agents who serve in a dumping ground department of MI5 - Slough House. Oldman will star as Jackson Lamb, the brilliant but irascible leader of the spies who end up in Slough House due to their career-ending mistakes.

The Late Show with Stephen Colbert dedicated the entirety of its guest time to Helena Bonham Carter (Bellatrix Lestrange) Tuesday, which only seems appropriate to us. Colbert provided a proper English tea service while chatting with Bonham Carter about a variety of topics, from The Crown and her past dealings with the woman she portrays, Princess Margaret, to favorite poetry. The host also asked the actress to spill the tea on some of her many costars, including Daniel Radcliffe (Harry Potter). She, of course, did so in the politest way possible. You can check out clips of her appearance below.

Bonham Carter also stepped out last week for the red-carpet premiere of Season 3 of The Crown, looking stylish as ever.

We've kept you apprised of all the latest regarding Scoob!, the new animated feature produced by Chris Columbus (Harry Potter director and producer) and featuring Jason Isaacs (Lucius Malfoy) in the voice role of Dick Dastardly, and the film finally has its first trailer! This first glimpse focuses primarily on the Mystery Inc. gang, so we unfortunately don't hear Isaacs, but there will surely be more to come ahead of the movie's May 15, 2020, release.

While much attention has been paid lately to Robert Pattinson's (Cedric Diggory) casting as Batman, an almost equal amount has gone to his strange yet strong performance in The Lighthouse alongside Willem Dafoe. The actor talked about the film again Tuesday on Late Night with Seth Meyers, breaking down everything from his method acting to some seagull costars.

Pattinson also made a recent appearance on Actors on Actors with Jennifer Lopez, and you can watch the pair's chat below.

Sir Kenneth Branagh (Gilderoy Lockhart) will be taking his voice back to radio later this month, the BBC says, with a Radio 4 broadcast of Stalingrad. The two-part drama is based on war reporter Vasily Grossman's account of World War II's Battle of Stalingrad and is a prequel to the reporter's novel Life and Fate. The broadcast is slated to air November 30 and December 1, and Branagh says he is grateful to be involved.

'Stalingrad' is unique radio and a true privilege to work on; a gripping panorama of the human experience in an epic Russian context but with a universal and very personal connection for listeners. I'm so grateful that the BBC have given us this masterpiece in audio and proud to have played a small part in a phenomenally talented and committed cast and production team.

WhatsOnStage also reports that a special screening of Branagh's 2015 production of The Winter's Tale will be held in theaters around the United Kingdom on December 4. The play also stars Dame Judi Dench and Jessie Buckley, and you can view a clip below. If you live in the UK, you can search to find a theater near you that will be participating in the screening.

Author Neil Gaiman recently hosted Playing in the Dark, an evening of readings from some of his most famous works accompanied by music from the BBC Symphony Orchestra, at the Barbican Centre in London, England. When the time came to discuss Good Omens, Gaiman turned the reading over to David Tennant (Barty Crouch Jr.), much to the audience's delight. Tennant not only revisited his character, the demon Crowley, but did an enthusiastic impression of Michael Sheen's Aziraphale as well, and you can check out a few photos along with the audience's reaction to Tennant's arrival below. 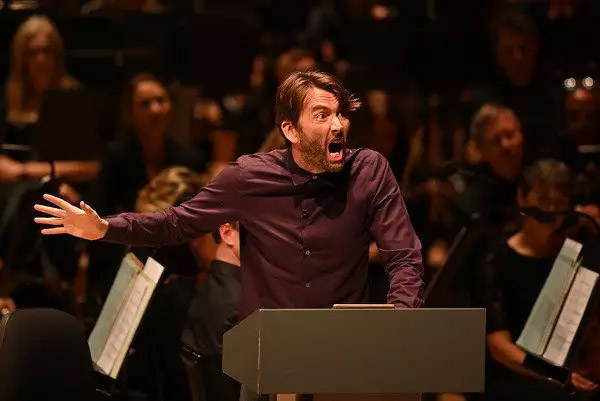 David Tennant gets animated during a reading from “Good Omens”. 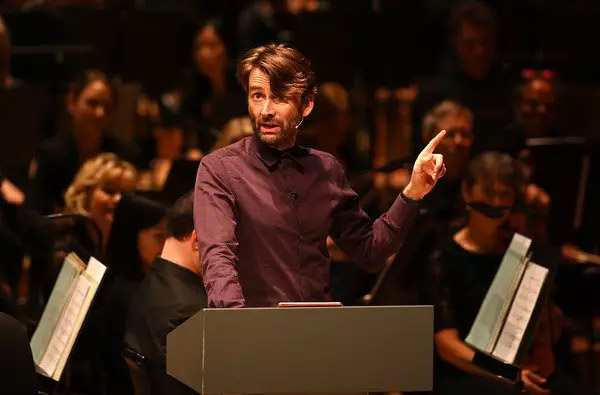 David Tennant points out that he’s awesome during a reading from “Good Omens”. 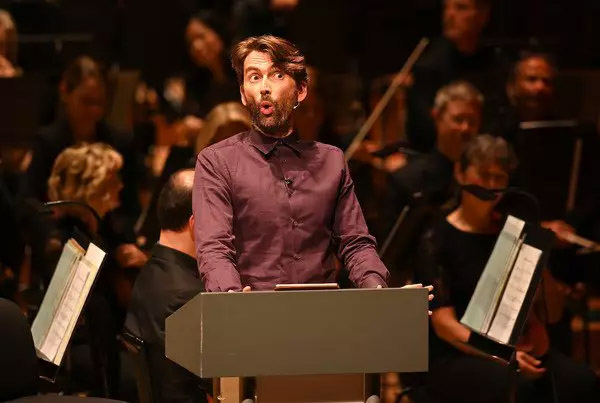 David Tennant puts on a shocked face during a reading from “Good Omens”.

Two alumni of the wizarding world will soon be teaming up for a four-part BBC series that will also air on PBS Masterpiece, Deadline Hollywood reports. Helen McCrory (Narcissa Malfoy) and Katie Leung (Cho Chang) will join Hugh Laurie in Roadkill, with McCrory starring as the British Prime Minister and Leung's role as yet unnamed. You can check out a synopsis below.

The thriller is about self-made, forceful, and charismatic politician Peter Laurence (Laurie). Peter's public and private life seem to be falling apart - or rather are being picked apart by his enemies. As the personal revelations spiral, he is shamelessly untroubled by guilt or remorse, expertly walking a high wire between glory and catastrophe as he seeks to further his own agenda whilst others plot to bring him down. However, events show just how hard it is, for both an individual and a country, to leave the past behind. With enemies so close to home, can Peter Laurence ever outrun his own secrets to win the ultimate prize?

Rhys Ifans (Xenophilius Lovegood) will be taking on a major role in To Kill a Mockingbird in a new West End production, London Theatre says. Ifans will star as Atticus Finch in the play's run at the Gielgud Theatre. Previews are scheduled to begin May 19, 2020, but ticketing details have yet to be announced. You can sign up online, however, to be one of the first to know when official dates become available.

We may be seeing Brendan Gleeson (Mad-Eye Moody) in a new Shakespearean production, Collider reports. The website says Gleeson is currently in talks to join Denzel Washington and Frances McDormand in a Joel Coen adaptation of Macbeth. Washington will star as the titular character and McDormand as his wife, while Gleeson is reportedly being considered for the role of King Duncan. Nothing is official, however, so we'll keep looking for updates.

Last but not least in Harry Potter alumni news, Kelly Macdonald (Helena Ravenclaw) has signed on for a role in the popular BBC One drama Line of Duty. Deadline Hollywood says Macdonald has been cast as Detective Chief Inspector Joanne Davidson in Season 6 of the series. Davidson "draws the attention of anti-corruption unit AC-12 for her unconventional conduct during the investigation of an unsolved murder." Filming is slated to begin next year on the new season, and show creator Jed Mercurio commented that Davidson will "prove the most enigmatic adversary AC-12 have ever faced."

Fantastic Beasts fans are well aware of the uniquely shining star that is Ezra Miller (Credence Barebone), but Time clued everyone else into the actor's cultural importance by naming him to its 100 Next list. The list is designed to highlight rising stars shaping the future of a variety of industries, including entertainment.

Miller has fully embraced and broadcast the pieces of his life that set him apart, from his love for his 95-acre farm in Vermont to his queerness, gender fluidity, and polyamory. In interviews, he's spoken out about Hollywood's 'rape culture'; in 'Playboy' magazine, he posed in a dress and bunny ears. That he's been this open while playing as iconic a superhero as the Flash makes him a new type of role model - and a champion of young nonconformists everywhere.

Big projects are abounding lately for our favorite wizarding world alumni. Which ones are you most excited about? And do you know of any we haven’t mentioned? Let us know in the comments!