The winter season is upon us, and we have just the thing to help keep you warm. Our friends at Insight Editions released Harry Potter: Knitting Magic, and we were able to put the patterns to the test. Check out what our Creative Media Manager, Amy Hogan, had to say when she gave it a go. 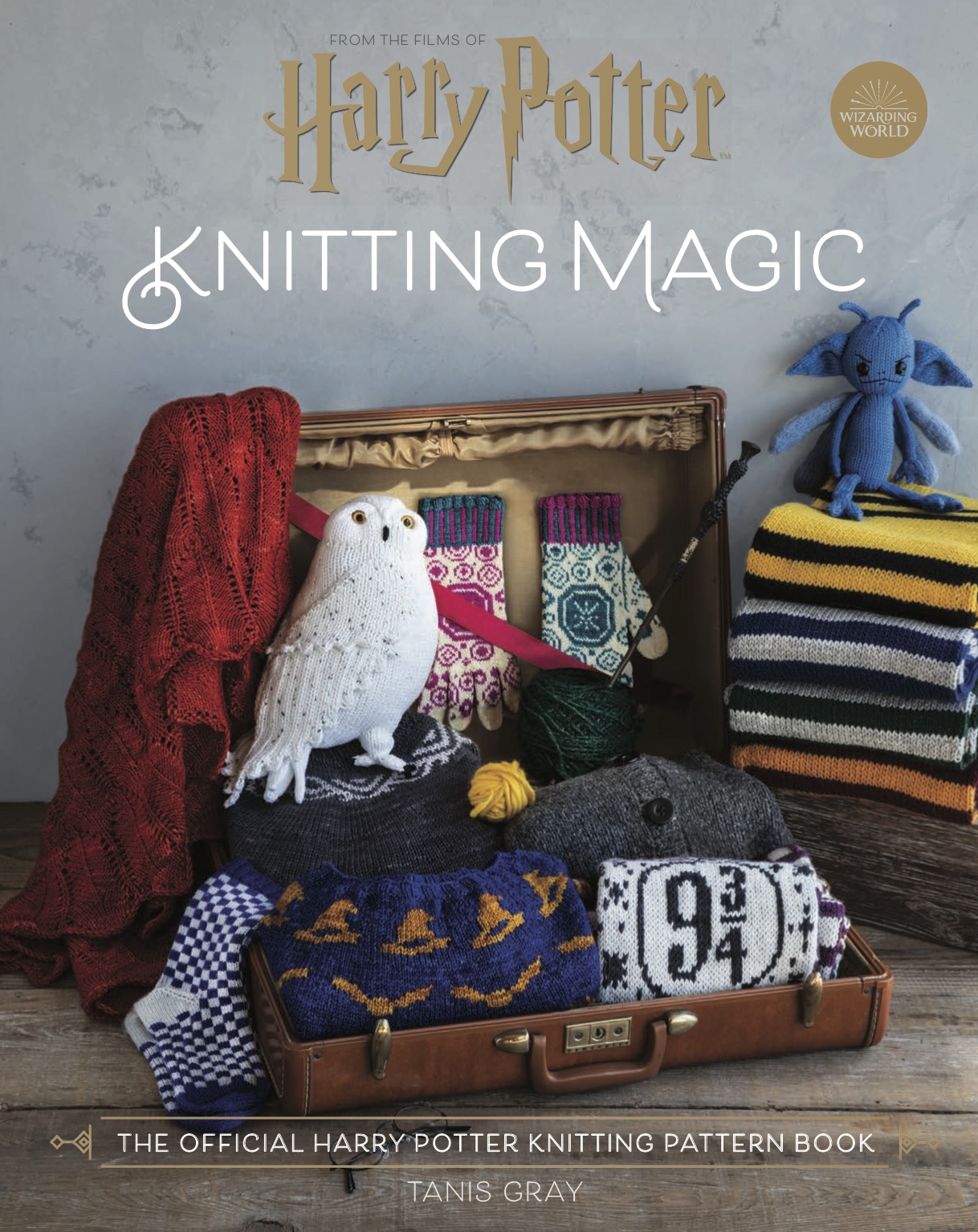 As someone who rarely sits still without a set of knitting needles in her hands, I was dying for a copy of the Harry Potter: Knitting Magic book from Insight Editions as soon as I saw the advertisements. This book is a compilation of knitting patterns ranging from an adorable stuffed Hedwig to costume replicas and subtle Potter-inspired wearables.

Each pattern is rated for skill levels using lightning bolts. The more lightning bolts, the harder the pattern is. For the sake of this review, I was looking for a simple pattern that wouldn’t take long to complete so that I could include some photos and get a feel for what this book has to offer. Unfortunately for me, and the less advanced knitters out there, most of the patterns in this book required a pretty substantial skillset. Don’t get me wrong – there are some pretty great patterns that are rated as being easy to make, but I would have liked to have seen more. Out of 27 patterns, only eight are rated “beginner” or “easy.” So if you are a less experienced knitter, take this as an opportunity to learn some new techniques and just have a smartphone or computer handy to look up tutorials.

So what did I try? First, I dove into the truly unique Dark Mark Illusion Scarf. This scarf uses a pattern of knits and purls with contrasting colored yarns to create the Dark Mark symbol. The cool part is the symbol can only be seen when the scarf is looked at at a certain angle. The reverse side of the scarf spells out Morsmordre. 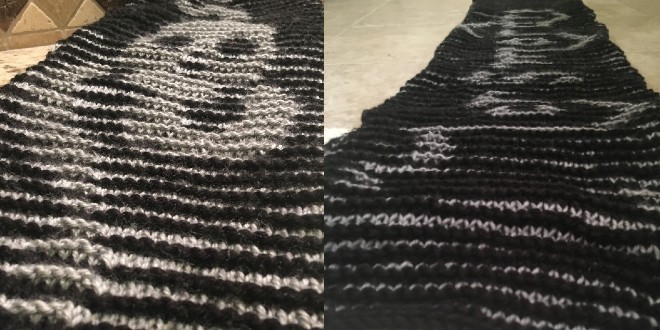 The pros of this pattern include the simplicity behind its construction and the fact that it is fairly quick to knit. The downside I found is that there is no border worked into the pattern to keep the edges of the scarf from curling in. The pattern’s finishing instructions include wetting the scarf and pinning it flat to dry to keep this from happening, but in my experience, that doesn’t usually hold up for very long. To maintain the shape of this particular scarf, you may need to repeat the wetting and drying routinely or modify the pattern to include a border.

The second pattern I took a stab at is definitely my favorite of the two: the Show Your House Colors Quidditch Socks. These socks are fabulous. Knit from the top down in the round, the pattern uses the two House colors of your choice to create a checkered print, as seen on the towers surrounding the Quidditch pitch in the films.

I made a pair in Ravenclaw (book) colors for a friend. 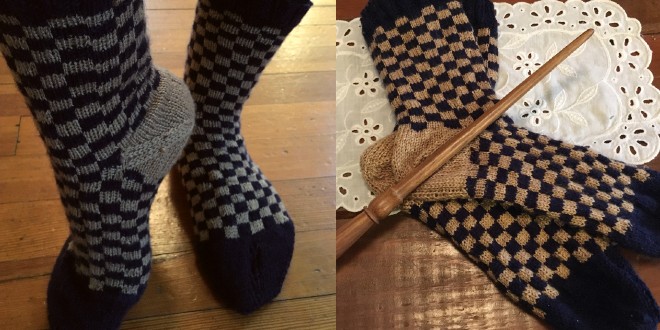 These socks are rated with three lightning bolts for difficulty but were fairly easy to complete. They’re the perfect addition to any sock drawer!

For a third example, I enlisted some help from a more expert knitter than me. Shira Karp tackled the Expecto Patronum Mittens, and I must say, they came out gorgeous! I’ll be citing her notes to give you an idea of how this pattern works out. 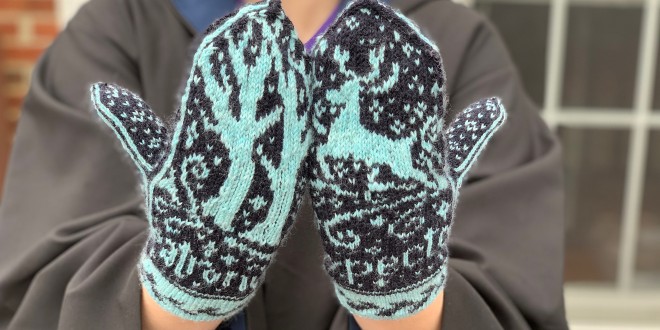 Shira says, “The pattern is well-written and the notes on the construction right up front are clear and easy to understand and really helped me visualize the project ahead of time” and that “these mittens would be a great project for someone to learn to do color work.” 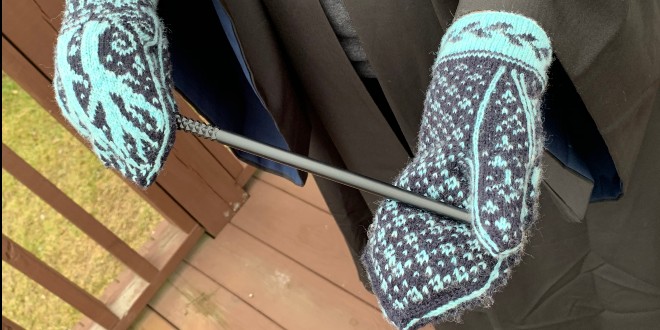 Shira says there is one mishap in the pattern, where it tells you to divide stitches evenly across the needles when really there should be 26 on the inside of the hand and 32 on the back of the hand to leave room for the thumb and gusset.

Shira says she would also rather the pattern charts used a different color than black to illustrate some of the color work.

I realize it’s supposed to look like the black yarn you are using, but it makes it hard to see the grid underneath and hard to count stitches. A lighter main color in the chart would help – the chart doesn’t have to use the exact color of the mittens. I would also recommend making a digital version of the chart available to people who purchased the book. Not sure how realistic that is, but it’s hard to get a chart completely flat in a book this large, and it’s hard to follow the chart when it’s not flat.

All in all, both Shira and I agree that this book is a Keeper for the Mrs. Weasley in your life. 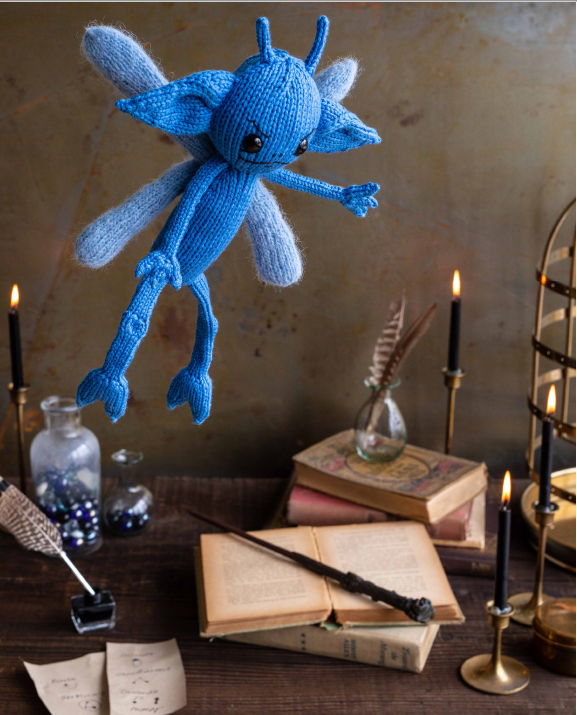 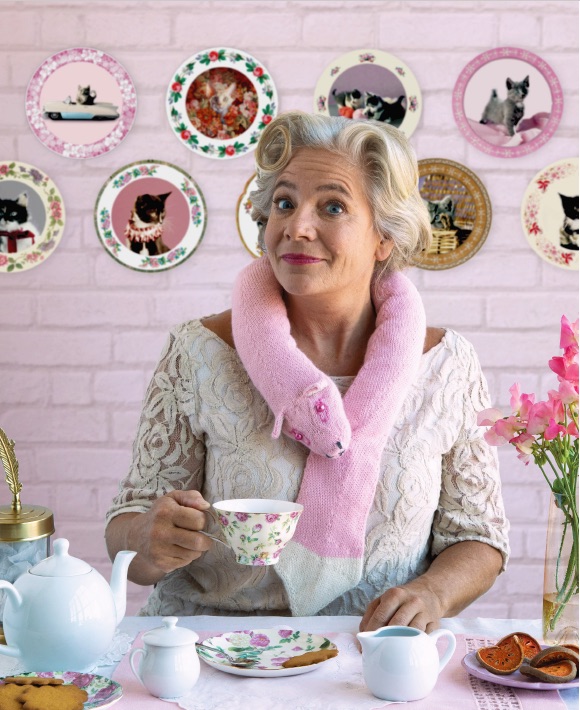 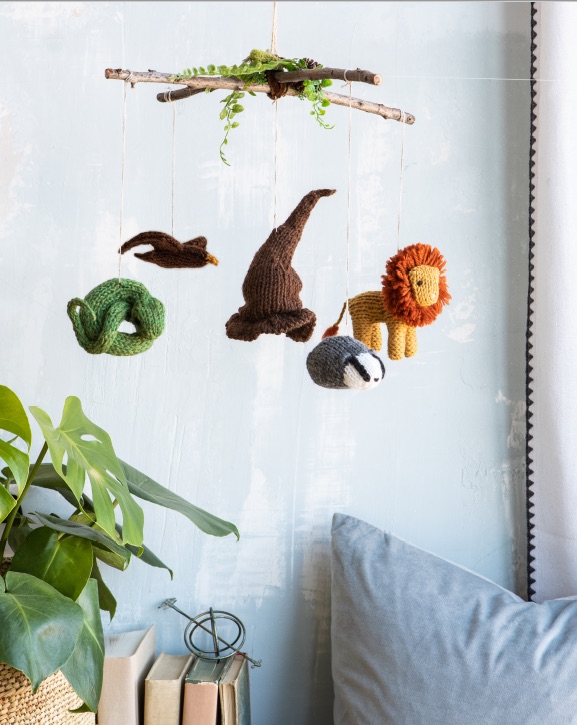 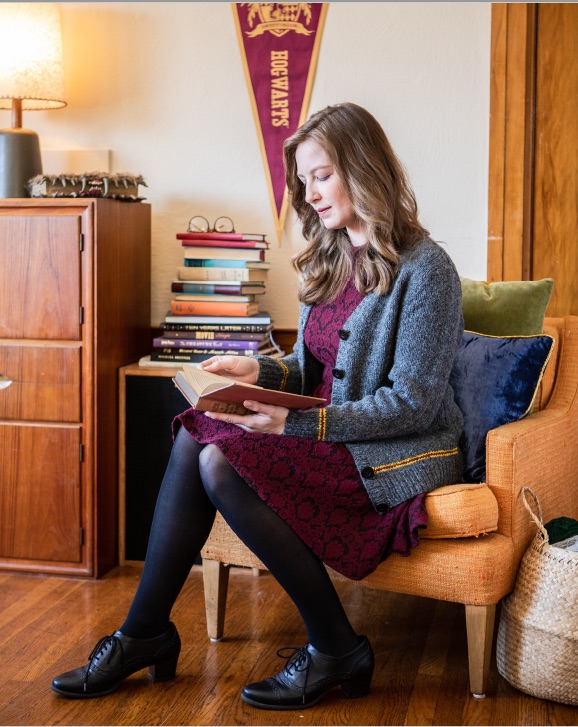 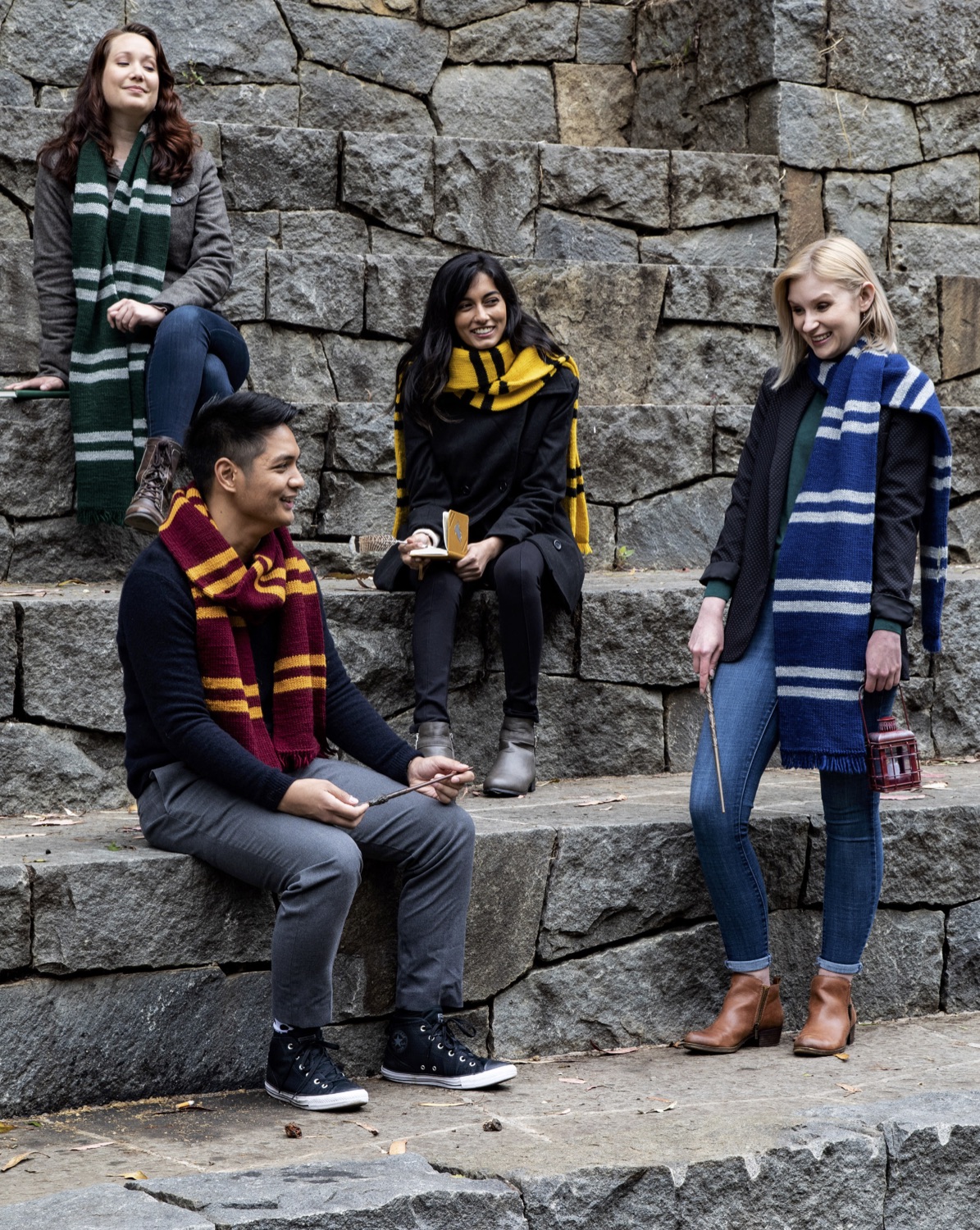 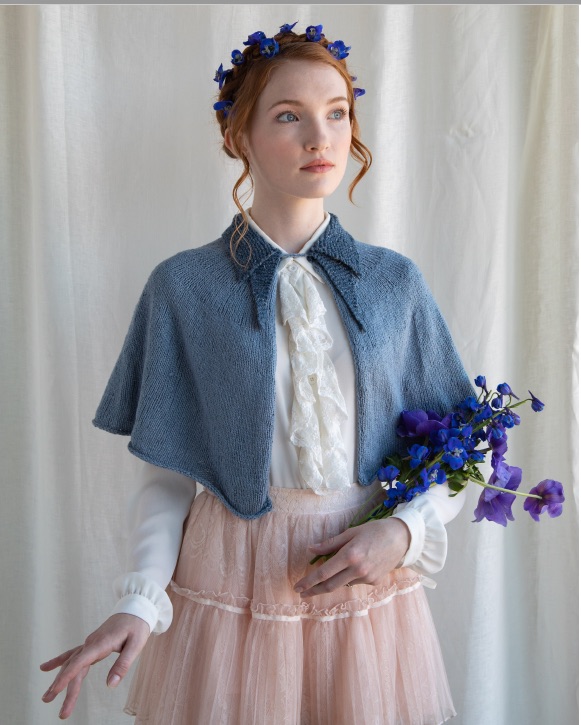 A copy of Harry Potter: Knitting Magic was provided by Insight Editions. All opinions belong to the reviewer.