These “Potter”-Themed Game Modifications Are the Stuff of Dreams

We’re going to dedicate this particular game update to games within games. We have a good reason for that: The two projects we’re about to mention deserve to be more than a footnote. They’re labors of pure, unadulterated love for the Wizarding World, created by Harry Potter fans, for Harry Potter fans.

High on every fan’s wish list is the ability to step into the worlds presented to us in books and films, and we can certainly get a taste of that at places like Universal Orlando Resort and Universal Studios Hollywood. But if you’d like to let your imagination run wild through the corridors of Hogwarts from the comfort of your own home, look no further than these first-person marvels of modification.

Minecraft fans are likely familiar with at least a few Potter-themed mods, but the latest, titled “Minecraft School of Witchcraft and Wizardry,” is the stuff of legends. 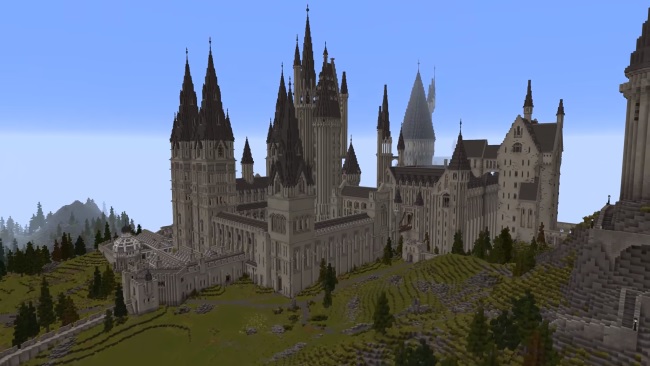 Modding group the Floo Network has been working on this one for years, and it shows. You won’t just be pretending to attend Hogwarts. You’ll be getting the full experience, from receiving your acceptance letter on Privet Drive to picking up supplies in Diagon Alley, from going on quests to battling monsters. Meanwhile, every location is absolutely stunning. It’s by far the most realistic mod we’ve seen to date. It’s also a lot to take in, so we asked a 12-year-old girl to watch the trailer and blurt out whatever she was feeling. It’s basically exactly what was going on in our heads too. Heck, it very nearly sums up the entire Hogwarts experience.

Oh my gosh, we’re at Privet Drive! Look at the owl! It’s our letter, isn’t it? Can we pick it up? We can pick it up and read it! We’re going to Hogwarts! [leaping up and down] Holy crap, it’s the Great Hall. There’s candles everywhere; there’s food everywhere. The staircases! The library! Are we going to get knocked unconscious by that mandrake? Diagon Alley! Look at Weasleys’ Wizard Wheezes; it’s amazing. Wait, should we be going to Knockturn Alley? Butterbeer! Is that the Chamber of Secrets? Zap those pixies! It’s Hagrid’s Hut. Are we flying on a broom? It’s the Burrow! It’s the Hogwarts Express! It’s Hogsmeade! It’s the Knight Bus!

The shouting just got harder to make out from there. You can check out the trailer below to see if you have a similar reaction, and to make your day even better, you don’t have to wait to try this mod out. A playable alpha version is available now.

You may have heard of the recent PlayStation 4 release Dreams, the user-generated creation system through which gamers can form their own games, assets, music, and art with the option of sharing it with the world. It obviously didn’t take long for someone’s thoughts to turn to Hogwarts. 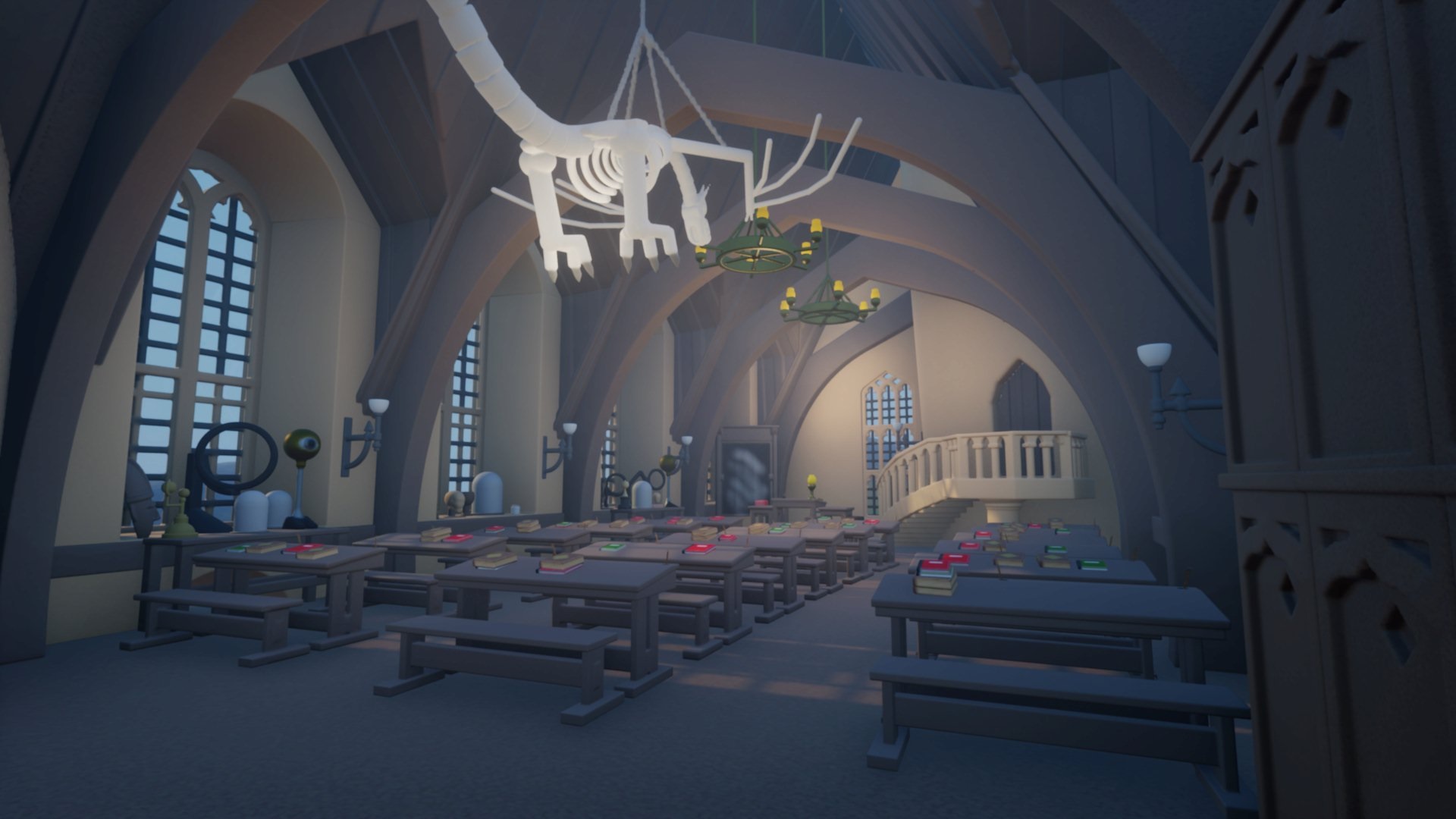 A screenshot from Barian1998’s “Dreams” Hogwarts walk-through shows the Defense Against the Dark Arts classroom. 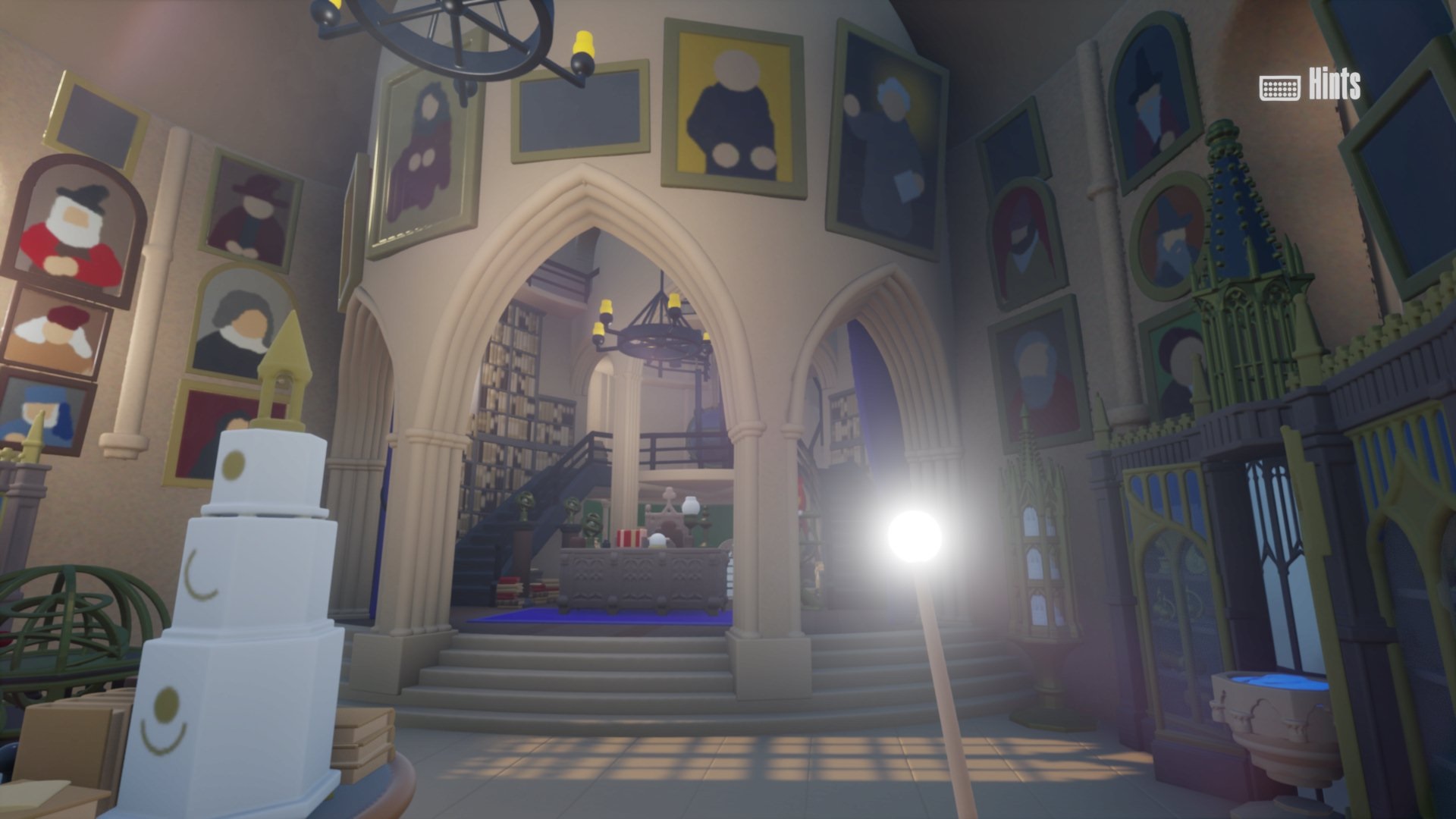 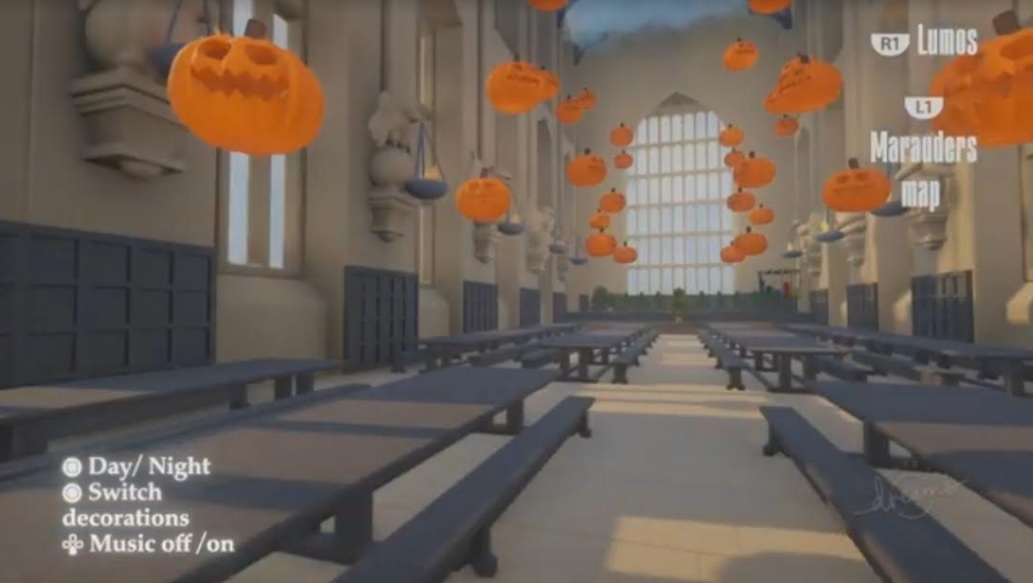 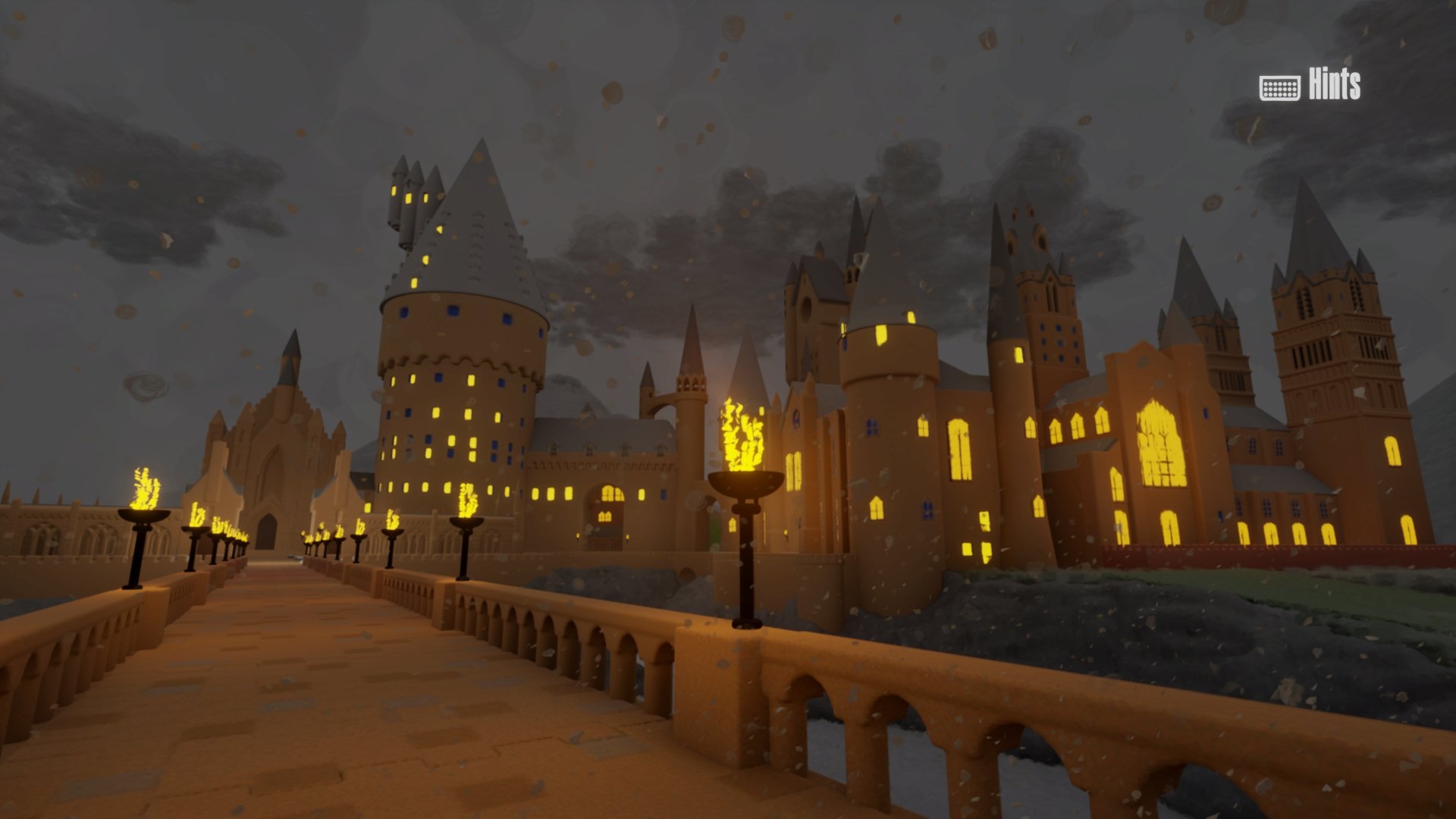 This screenshot from Barian1998’s “Dreams” Hogwarts walk-through shows a stunning view of the exterior of Hogwarts at night. 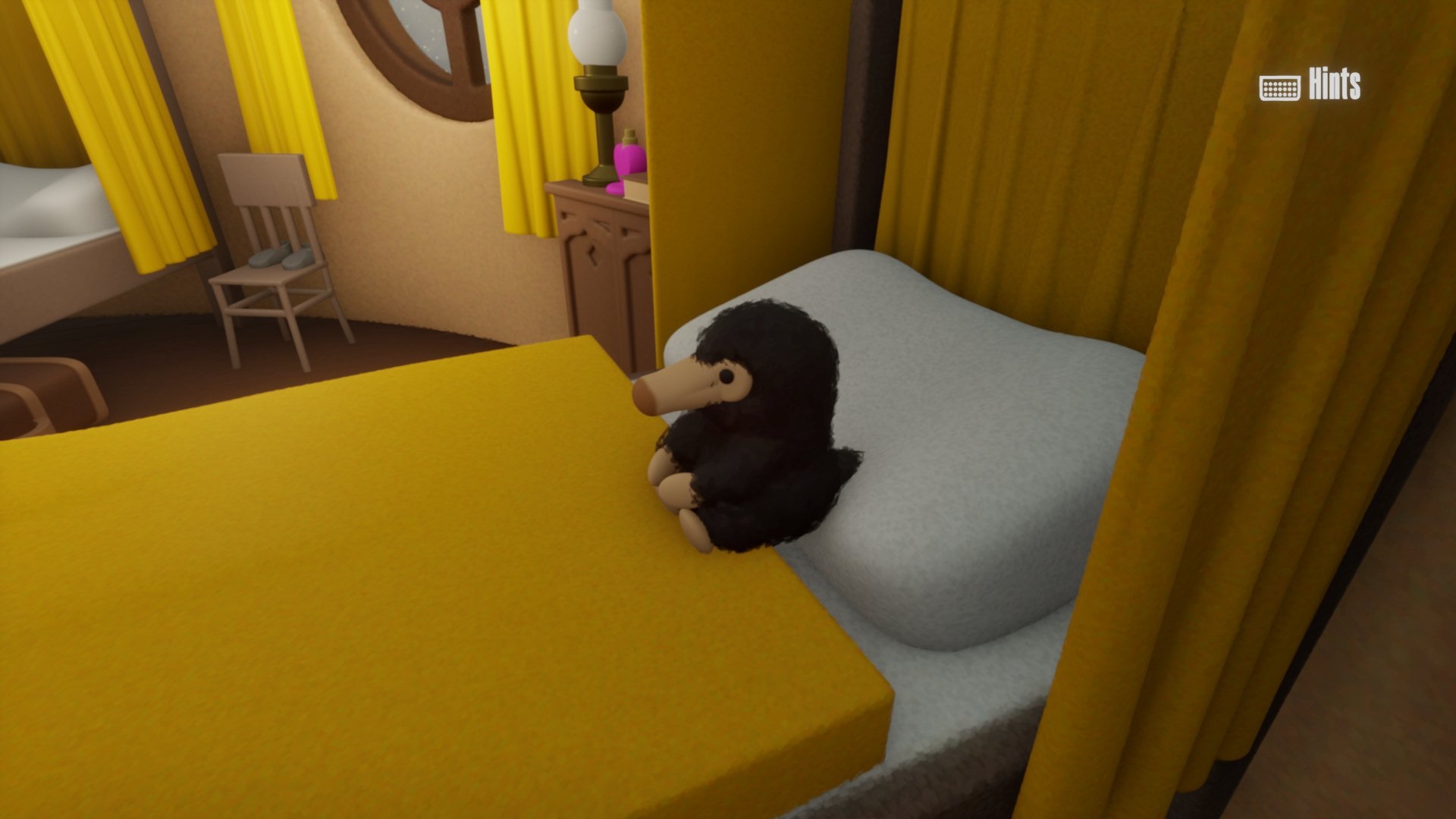 This screenshot from Barian1998’s “Dreams” Hogwarts walk-through shows a Hufflepuff dorm room bed that lives up to all of our expectations. 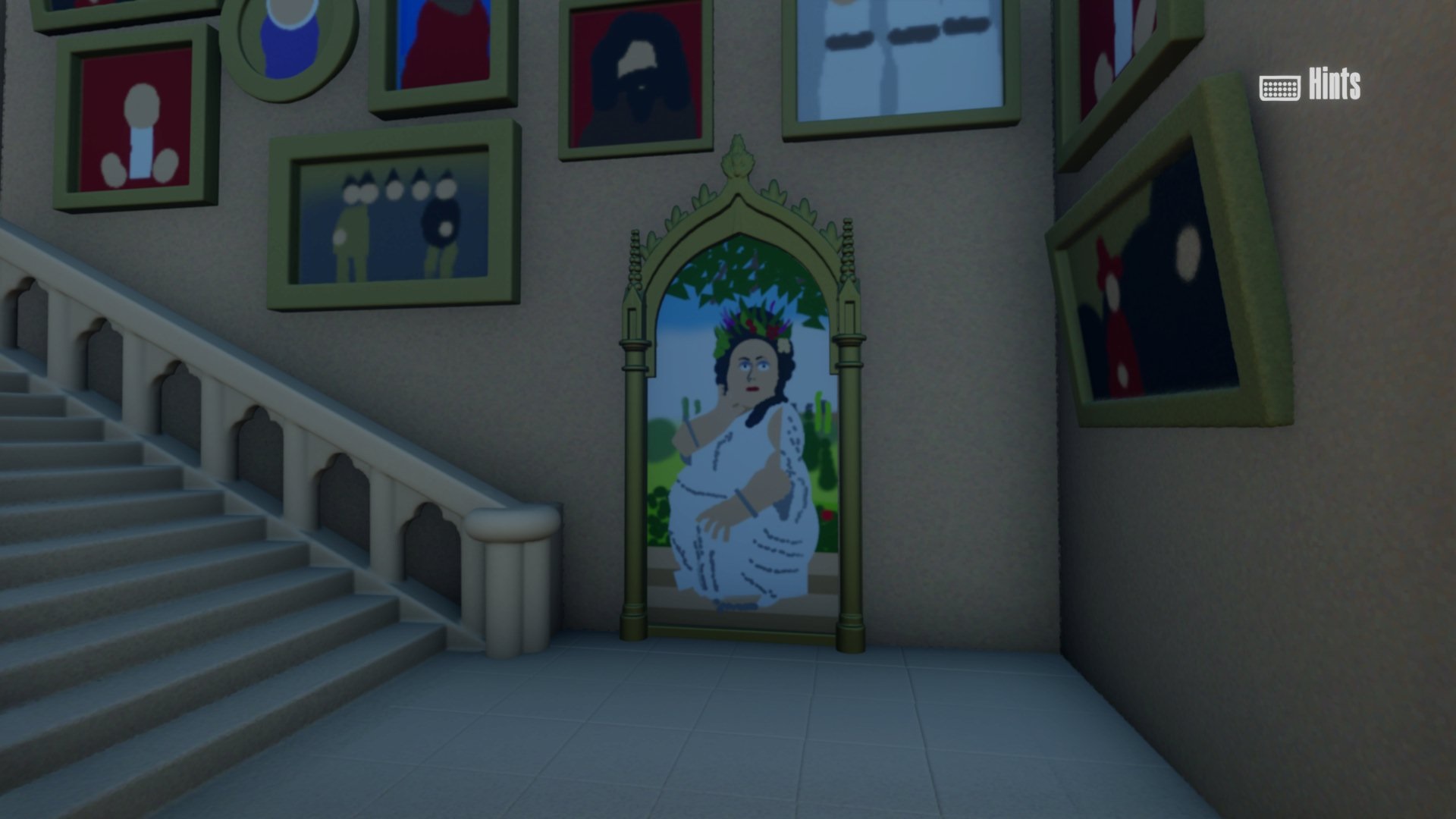 This screenshot from Barian1998’s “Dreams” Hogwarts walk-through shows the portrait of the Fat Lady.

User Barian1998 has created a massive re-creation of the castle and its grounds that allows players to roam from the Great Hall to Dumbledore’s office to all four House common rooms and beyond. Hagrid’s hut, the Hogwarts boathouse, and the Whomping Willow are also featured. Controls seen in the walk-through below indicate players have the option of changing the weather outdoors from sunny to rainy or snowy, casting the Wand-Lighting Charm for a little extra visibility, using the Marauder’s Map, switching between day and night, and adorning the Great Hall with Halloween or Christmas decorations.

Dreams retails at $39.99 for PS4, and you can pick up Barian1998’s creation via the game’s official site. As a bonus, the creator has made Hogwarts remixable, meaning other players can use it in their own projects and tweak or expand on it. As an even bigger bonus, the game’s developer, Media Molecule, has hinted that PlayStation virtual reality support could be in the game’s future, and all we have to say to that is PLEASE PLEASE PLEASE PLEASE PLEASE.

So what do you think of these two immersive game experiences? Let us know in the comments, and if you know of any other amazing Potter-themed mods or video games, drop that information in the comments as well!