Read part one of this epic saga here.

Finally, Sunday rolled around. I met Shakira at the tube station, and we ventured into Soho together. I, being the extrovert I am, went with a white shirt and bow tie. I was super overdressed as this wasn’t the red carpet (*ironic foreshadowing*) but – you know – when in Rome.

Cursed Child in London takes up residence at the Palace Theatre in the West End. Walking along Shaftsbury Avenue, you are met by a charming red brick facade with multiple rows of arcaded windows. 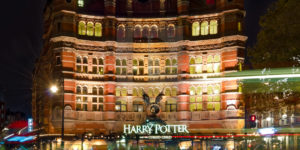 Once inside, you can see why the theater has the word “palace” attached to it. Meters of gold trim detail the most seemingly insignificant features. The grand staircase is supported by columns of rich green marble and flanked by antique railings. If you haven’t been, the theater embodies what one would expect of a prestigious London show venue: old, grand, and with copious amounts of faded red velvet.

On our way to our seats, we passed a lot of Harry Potter merchandise: Slytherin cloaks, Hufflepuff ties, Gryffindor mugs, and Ravenclaw sweaters. There was Cursed Child paraphernalia along with a host of other things you could purchase. This was perhaps my least favorite part of the experience. While I think there is nothing wrong with owning Harry Potter products, I wanted my theater experience without a side of sales and marketing.

We were shown to our seats, and what we didn’t realize was that – by winning the lottery – you didn’t just get the nobody-wants-cheap-peanut-gallery tickets. You got some of the best seats in the house. We were seated right here: 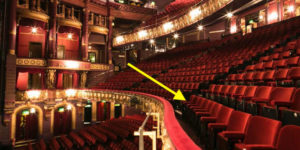 That meant our view of the stage was unobstructed: 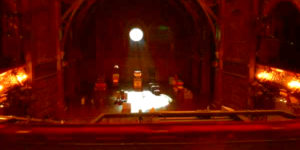 This is another huge win for me as I stand at 5′ 2″ and am often blocked by the person sitting in front of me.

We sat next to a lovely Scottish couple who had traveled down from Glasgow and were a joy to chat with between parts.

The anticipation coupled with a cool glass of champagne served to whip my excitement up a few levels. As I was scanning the room, admiring the architecture, Shakira gave a squeak, pointing down to the seats in front of her. I followed her glance, and there, sitting below us, was Warwick Davis. We had gone to the theater on the same night as Professor Flitwick. Excitement levels increased to an unstable level at this point.

Suddenly, the lights dimmed, and a respectful silence fell over the audience. I had the immediate thought that I was super pleased with myself for going to the toilet prior – followed by the thought, “Merlin’s beard! This is it!” 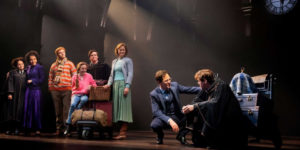 Now, I would love to tell you all about the show, my favorite parts, moments of fear, delight, and awe; however, J.K. has asked specifically to #keepthesecrets, and apart from the fact that I would do anything she asked, I don’t want to spoil anything for anyone who has yet to see this play.

What I will say is the actors were fantastic. Jamie Parker as Harry Potter and Anthony Boyle as Scorpius Malfoy really stood out for me. There is something about Jamie’s voice that is both calming and stimulating. However, the main standout for me was never on stage – it was the tech team. Their incredible mechanist skills at producing magic on stage were astounding, and as an avid theater-goer and performer, I like to think I know a bit about backstage tricks. This, however, looked real, and the more my brain tried to rationalize it, the more intrigued I became. 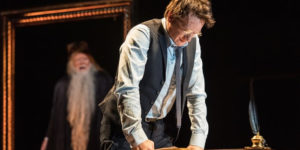 If the set illusion wasn’t enough… Returning for the second part, we took our seats again, chatted with the Scottish couple, and then I decided I had enough time to go and get another glass of champagne. On my return, there was some murmuring throughout the audience – my ears perked up at this as it was above the normal intermission chatter. I raised one eyebrow at Shakira and the Scottish couple who gleefully pointed to the seat directly behind me. As I turned, there was a scream and exuberant pointing towards my area – in walked Tom Cruise. He smiled, gave a quick hello, then sat down. This was the moment when I was glad to have donned a bow tie. 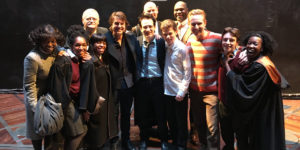 Having Tom sitting practically next to me, within touching distance, should have been a distraction for the remainder of the show, but it wasn’t. I was mesmerized. I highly recommend seeing this production, and in fact, Shakira was already talking about taking part in the Friday Forty again by the time we left the theater.

Congratulations to J.K., Jack Thorne, and John Tiffany. I thoroughly enjoyed stepping into their world again. The actors did a fabulous job, the production crew was outstanding, and clearly, the buzz of the show is working if it’s famous attendees are anything to go by.

In summary, it was a magical night. I rubbed shoulders with one of my favorite British actors and arguably the most famous actor in the world, yet the Harry Potter and the Cursed Child cast and crew stole the show.