While the entertainment industry has been hit hard by this year’s coronavirus chaos, at least the awards shows must go on. The 72nd Primetime Emmy Awards nominations have just been announced, and fans of the Harry Potter films have reasons to celebrate. Fiona Shaw (Petunia Dursley) and Helena Bonham Carter (Bellatrix Lestrange) have both bagged award nominations and will come to a head in the coming weeks. Muggles vs. wizards, or should we say spies vs. royals: Who will win?

BBC America’s Killing Eve has been nominated for eight awards in seven categories, while Netflix’s The Crown has 13 nominations in 12 categories. The shows’ respective production teams can look forward to nods in cinematography, costume, casting, and more, for their wonderful behind-the-scenes magic. Moreover, Killing Eve‘s Fiona Shaw (Carolyn Martens) and The Crown‘s Helena Bonham Carter (Princess Margaret) are both in the running for Outstanding Supporting Actress in a Drama Series. 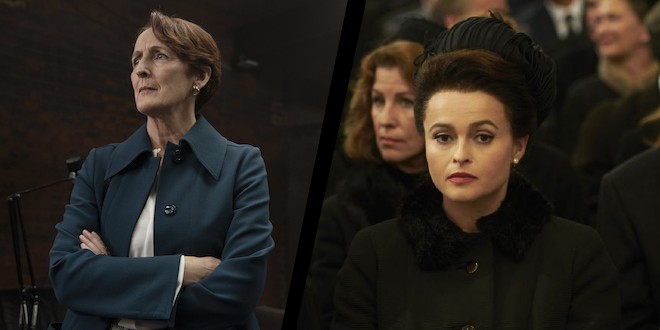 As previously reported, Imelda Staunton (Professor Umbridge) has been cast to join The Crown‘s fifth season as Her Majesty Queen Elizabeth II herself, for which she is already preparing. However, though the current reigning queen, Olivia Colman, had wrapped her scenes on Season 4 just a week prior to the lockdown, filming with Staunton has been postponed to start only next July. She is in for a treat according to Helena Bonham Carter, who reacted to her nomination with some thoroughly joyous words about her role in the series:

I am thrilled to receive an Emmy nomination. Margaret was a gift of a part and was a dream job. This is icing on the most full fat delicious cake I’ve ever eaten. Also, given these past few months, I have become ever more grateful to my television. It has been my window to the world. And I’m so thankful to the parts that television [is] now offering to women. We all know middle age is when we get interesting, and it’s so great that stories are being made where we are invited to lead rather than retire to being the mother or grandmother in the background ….women of all ages and colors have never had it better. Thank you, [t]elly!

No, thank you for the royally awesome performance! However, Bonham Carter has competition. Without giving away any spoilers, Shaw’s stunning performance as the secretive MI6 agent and emotionally unavailable mother, Carolyn, has been the best yet in the latest season of Killing Eve, where her arc took a shocking turn and revealed more about her than ever before. Fingers crossed for the well-deserved Emmy, and for some resolutions next season. We will have to wait for that for longer than expected since filming on Killing Eve has also been delayed. The show’s leads, Sandra Oh (Eve Polastri) and Jodie Comer (Villanelle), are also competing for the same award for Outstanding Lead Actress in a Drama Series.

The list came with some surprises and snubs, as always. In light of the Black Lives Matter movement, it is a pleasant surprise to see more Black actors nominated in major categories. 35 of the 102 acting nominees are Black, including Tracee Ellis Ross, Anthony Anderson, Mahershala Ali, Issa Rae, Octavia Spencer, and Zendaya, making up a record of 34.3 percent. HBO’s Watchmen dominates this year’s Emmys at 26 nominations. However, some lamented oversights for the casts of The Morning Show (Apple TV+), Hollywood (Netflix), or Harry Potter alumna Emma Thompson (Sybill Trelawney), who was also left out despite her chilling performance as Vivienne Rook in Russell T. Davies’s political-dystopian miniseries Years and Years (BBC/HBO). Read the full list of nominations to pick your favorites.

The virtual announcement was hosted by Leslie Jones (Ghostbusters, SNL) and presented by Laverne Cox (Orange Is the New Black, Charlie’s Angels), Josh Gad (Frozen, Beauty and the Beast), Tatiana Maslany (Stronger, Destroyer), and Television Academy chairman and CEO Frank Scherma. The final-round voting will take place August 21–31. The 72nd Emmy Awards will be hosted by Jimmy Kimmel. The show, which is bound to take an unconventional form this year, will be broadcast at 8 p.m. ET/5 p.m. PT on September 20, on ABC.