It’s no secret that I’m kind of in love with Viktor Krum. Maybe it’s the former ugly duckling in me, but I fell head over heels for him because he saw – and liked – Hermione for who she was. Bushy hair, big teeth (during part of the year at least), and all. Despite his popularity and his ability to surround himself with anyone he desired, he chose Hermione. 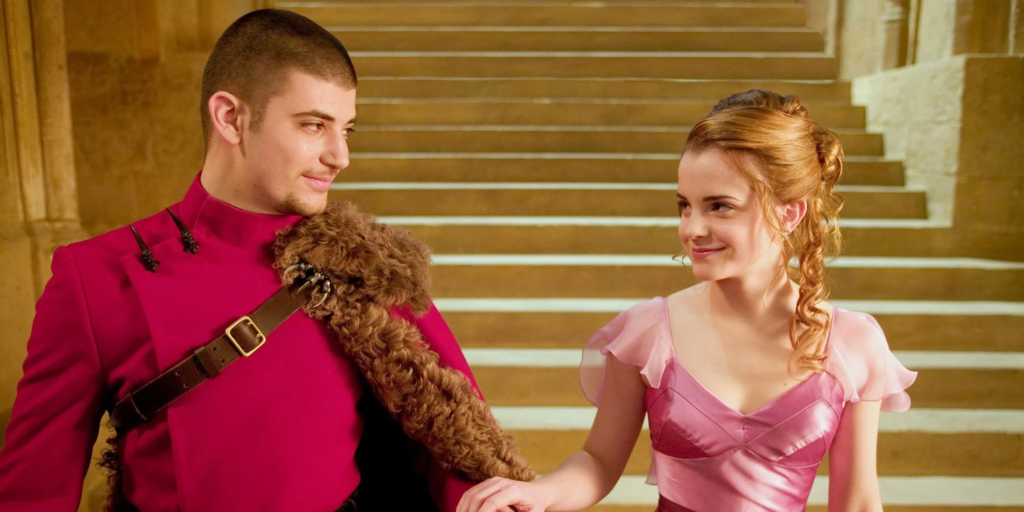 Stanislav Ianevski – who portrayed Krum in the Harry Potter films – discussed his character on EW’s Binge podcast. Apparently, Harry Potter and the Goblet of Fire director, David Yates, was so enamored with the idea of a Krum-Hermione-Ron love triangle that he planned to change JKR’s story in order to make it work for his romantic vision.

Don’t get me wrong – I love Ron. I love Hermione. And I absolutely love Romione. But if Hermione were to end up with Viktor Krum, would it really be the worst thing in the world?

Some may argue that Krum and Hermione may not have had a lot of interests in common, but to that I say, do Ron and Hermione? Our favorite heroine shared profound experiences with both beaux. Ianevski lamented, “It was obviously difficult for them to understand each other… He wouldn’t really understand much. He would just sit and watch her, sort of observe and protect… Being the world’s best Quidditch Seeker obviously he has a big ego, so he would defend loved ones.”

I see Viktor as a true gentleman. Hermione proved time and again that she didn’t need someone to protect her, but that doesn’t make the notion any less endearing. He respected her, admired her, and possibly even loved her.

Hermione even told us that “[Krum] did say he’d never felt the same way about anyone else” (GoF 514). I can just picture elementary-school me swooning at those few words of his, and I’m definitely swooning rereading them now. Viktor was the first guy to give Hermione the attention we all know she deserved.

I think Krum is as close to genuine romance as we get in the series since most of the couples had been friends for many years before falling in love. This is not to say that childhood love can’t be romantic, but the slow burn of Ron and Hermione just doesn’t hit the same as Krum falling fast and hard. When Viktor saw Hermione again at Bill and Fleur’s wedding in Harry Potter and the Deathly Hallows, without a second thought, he told her, “You look vunderful” (DH 143). My heart can’t take how easily and genuinely he compliments her. Viktor actively sought her out. He took interest in the things that she was interested in. And he made Hermione feel special – which is something we all deserve to feel.