Dolores Umbridge’s authority – especially her authority over children – is what makes her just so terrifying. In modern-day, she is more of a realistic threat to us Muggles than the Lord Voldemorts of the world. We have seen corrupt political leaders, and we have seen abusers in positions of power over kids. Umbridge represents a real, innate fear in most of us: being taken advantage of by someone whom you should be able to trust, by someone who should be protecting you.

Dolores Umbridge is in a position of power and is allowed to stay in it even after abusing it. Lord Voldemort, on the other hand, is evil, whereas Umbridge believes she is one of the good ones and that her actions are justifiable, even necessary.

Umbridge is disgusted by “half-breeds” – the centaurs, Hagrid, etc. She insults and demeans them.

She uses physical punishment and not just on Harry. We know that her quill was used on Lee Jordan as well. Who knows how many other students were tortured by Umbridge while she was at Hogwarts?

She manipulates students. Marietta Edgecombe’s mother worked at the Ministry, and Umbridge threatened her mother’s job to get information out of Marietta.

She smugly attended Dumbledore’s funeral as if she hadn’t despised him and revolted against him the previous year.

In an act of hypocrisy comparable to Voldemort’s, she ran the Muggle-Born Registration Commission. She herself was a half-blood witch. 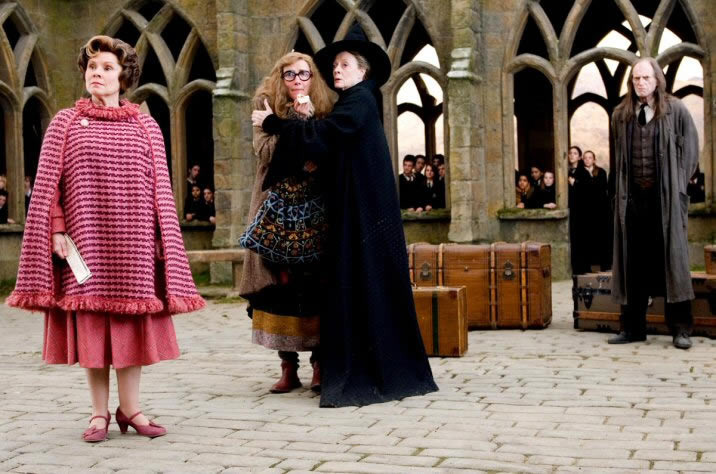 She enjoyed publicly humiliating Sybill Trelawney and was going to throw her out of her home with nowhere to go. Thankfully, Dumbledore found a loophole to stop her.

She intended to perform an Unforgivable Curse on Harry – illegal, dangerous, and evil on anyone, especially a child.

Umbridge stole Moody’s magical eye (gross) after he died. You guessed it – it was used to monitor and scare her subordinates (bless Harry for taking it along with the locket).

She is corrupt. Rather than shutting Mundungus Fletcher’s illegal business down, Umbridge took his goods as a bribe – one of which was Slytherin’s locket. I’d like to argue that since she wore the locket (being Voldemort’s Horcrux) and didn’t seem any different, she wasn’t hindered by the Dark object. While the trio couldn’t have the locket on for long, she proudly bore it, pretending to be a pure-blood wizard with Slytherin’s locket as proof. She uses the color pink and acts sweet as a peach to disguise her dark heart.

Not that Voldemort or even Bellatrix’s actions are excused but they came from evil families. Voldemort was created as the product of a love potion, and Bellatrix was taught the evil of anything-less-than-half-bloods and had Death Eaters in the family. Dolores is the child of a Muggle woman and a Ministry janitor. From what I can tell, she learned and chose to be prejudiced all on her own. 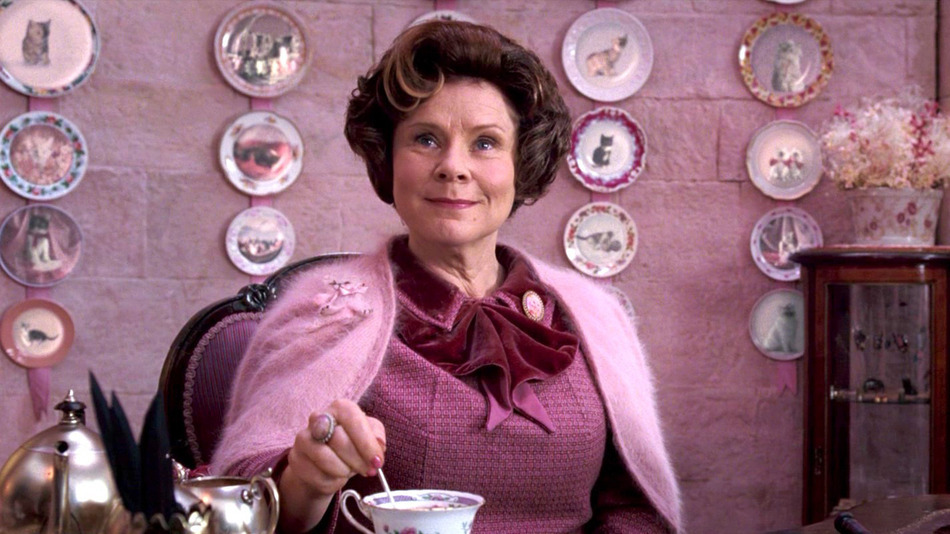 I can’t imagine a world in which any living, breathing cat could like such a terrible woman. But the way that Umbridge – and her real-life counterparts – does damage in plain sight makes her a terrible person to behold.