“Raven Chronicles” Chapter 1: The Adventure of the Hogwarts Express – Part 2 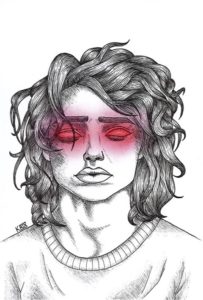 I had maybe three seconds to take in my compartment. I thought for sure students would be in there. Instead, it seemed empty. That is until a man woke up, throwing his black cloak off of him.

When a wizard Apparates, they make a noise, sometimes only small pops if you’re truly skilled and sometimes excruciating loud cracks. As a beginner, I naturally incurred the latter. The man’s wand snapped into his hand. The man, of Indian descent and clean-shaven with neatly cut black hair, towered over me. He stood in black robes, a white shirt with a black sweater over it, and a loose black tie around his neck. I couldn’t tell if he was a young teacher or a young Auror.

I mentioned the Potter years before and new train security measures because of those events. Well, I ran into those new security measures. Something akin to a Muggle alarm bell sounded, and the lights in the train switched from white to red.

“What are you doing?” said the man. He had a London accent and a silver Hogwarts crest on his robes – a teacher then.

It was sensory overload – especially for a nine-year-old. I was out of the compartment in half a heartbeat. The corridor floors were wooden, the ceiling was wooden, the doors were wooden though each had a large window in it, and there were dozens of students pressing their faces against the glass to catch a glance of the troublemaker – me.

I noticed several students had some sort of green and silver robes, sweaters, or necklaces. I saw a black-haired girl with silver and green snake earrings. So many Slytherins in the back of the train. Why?

A door opened at the end of the corridor, and a wizard in black robes came whirling out. A wand pointed at me, I read the little gold M on the chest. Auror. Got it. Crack. I stood in the steam room. No Aurors there.

I swiveled to see the conductor in his chair – or its chair. A house-elf sat in a seat too large for it, its feet unable to reach the ground, its head several feet below the top. The house-elf used magic to push and whirl the numerous levers and buttons at the front.

A house-elf? Good thing it did not look at me, for I do not think my face masked my disappointment. I had imagined a heavyset man with a mustache and a blue and white striped hat. He was supposed to have burly forearms, thick arm hair, eyebrows that covered his face, and red cheeks. He was supposed to be smoking a cigar and puffing smoke outside the window.

Instead, the conductor wore a burlap sack that had “Cotswold’s Finest Flour” embroidered in burgundy lettering. Its ears were smaller than normal for a house-elf as was its nose.

“I just want to look around. Then I’ll leave.”

To my right, a shovel shoveled coal – of its own accord – into the furnace. But the amount of coal was considerably less than what the train really needed.

But of course! The train ran on magic so the coal? The coal, was it just there for the aesthetic? Burning solely to create black clouds billowing from the train? It must have been.

“C’mere.” A long and pointy finger ushered me beside the house-elf.

“Are you the conductor?”

“Course not. Master Morrigan is, but he’s sick today. I’m just the assistant.” The house-elf thrust a thumb behind him. “You haven’t got much time ’til the trolley woman gets here. What do you want to know?”

“Everything,” I said. “Who is the conductor?”

The house-elf snapped his fingers, and a picture of a man formed. He was not fat but very thin and wore too-big-for-him overalls, a white shirt, and a black hat. “Master Earl Morrigan, conductor of the train and a Squib. Former Headmaster Albus Dumbledore gave ‘im the job when Master Morrigan graduated from a Muggle college in engineering about 52 years ago.”

“If he’s a Squib, then who powers the train?”

“House-elf magic runs the Hogwarts Express?” I could hear the rudeness of my question, but I couldn’t stop it from coming out.

The house-elf began to point at various buttons and levers. “Speed for the train, anti-Muggle protection so we don’t get detected, invisibility, size adjustment so the train fits enough passengers, Sneakascope, train whistle, sandwich maker, uh train alarm – which is still on thanks to you. Let’s see – no, no, you’re outta time, sir.”

The door behind us opened, and a dumpy but kind-faced woman wearing a gray apron and matching pointed hat opened the door. “Stowaway!” she bellowed, and she marched toward me.

But I was off with a crack, back in my classroom, which was empty save for my sister. She gave me a wide smile and tossed me an apple from the cafeteria. “You’ll be in lots of trouble when we get home.”