British dad Billy Shepherd is appealing for help after he realized that his late wife’s collection of all seven Harry Potter books had been accidentally dropped off at his local Cancer Research charity shop.

The books, which were a mixture of paperbacks and hardbacks, were last seen on Monday, December 7, when he and his 16-year-old daughter, Hannah, were sorting out her late mother’s belongings. 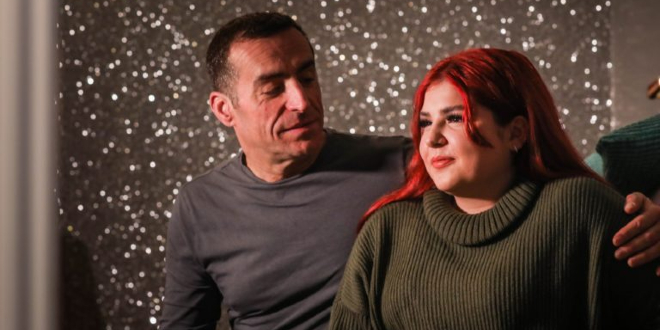 Billy Shepherd puts his arm around his daughter, Hannah.

Veronica died of cancer four years ago at age 45 and left the Harry Potter books to Hannah. The books were supposed to go into Hannah’s room but were mistakenly put in the wrong box and sent to their local Cancer Research charity shop on Brook Street in Broughty Ferry, United Kingdom.

The books aren’t first editions, but Billy spoke about the significance they have for his daughter.

My wife bought them as they were coming out. They aren’t first editions, so they’re not worth a ton of money, but they were fairly early copies. She left them to Hannah after she died, and obviously, they mean quite a lot to her because of that.

By the time Billy and Hannah realized what had happened and went back to the charity shop, the books had already been sold. Billy discussed his disappointment at not being able to reclaim the books.

The way that the shift [sic] work there, because it’s volunteers, they’re not sure who sold them or when it might have been. They did have some of our other stuff, but they didn’t have any of the books. I’m desperate to get those books back, and I would be really grateful for any help at all.

Billy and Hannah are now appealing for information on the books’ whereabouts, which were bought from the charity shop between December 7 and December 10. They are asking anyone with information to get in touch with them through Facebook.

UPDATE: no sign of the books yet, unfortunately, although I’ve had plenty of kind offers of replacements. It’s very…

Since posting his appeal on Facebook, it has been shared 7.3K times. Billy added an update to the post, discussing the many kind offers he has been given.

I’ve had plenty of kind offers of replacements. It’s very humbling, even if we’re still holding out and hoping for the best. I’ve had one offer in particular, and this is to swap the originals with a brand[-]new set of the books. […] So this would be a chance to swap our books for something even better.

Despite these thoughtful offers, Hannah has spoken about the sentimental value of the books and the special connection they have to her mother.

We used to read them together. I definitely remember reading […] Philosopher’s Stone with her, and her mum – my gran – used to read the books too. There aren’t enough words to say how much it would mean to get them back. Harry Potter was one of the big connections I had with my mum, and I felt like I’d lost a part of her [when] I found out the books were gone.

If you have any information, you could make their Christmas by getting in touch with them.