Though the idea of a Harry Potter-themed event seems wonderfully fun and whimsical, translating all those minute details from the fantastical book and film series into a real-life scenario must be incredibly daunting. The difficulty increases significantly when those details have to be translated with tasteful elegance for a Potter-themed wedding. Some wedding planners have the skill and eye for detail to execute it successfully. In the case of one Potter-obsessed couple, wedding planner the Savvy Bride brought the wizarding world to Grafton, Illinois, on November 9, 2019.

The Savvy Bride re-created the Great Hall at the historic Pere Marquette Lodge by replicating the floating candles and starry sky of the enchanted ceiling seen in Harry Potter and the Sorcerer’s Stone. 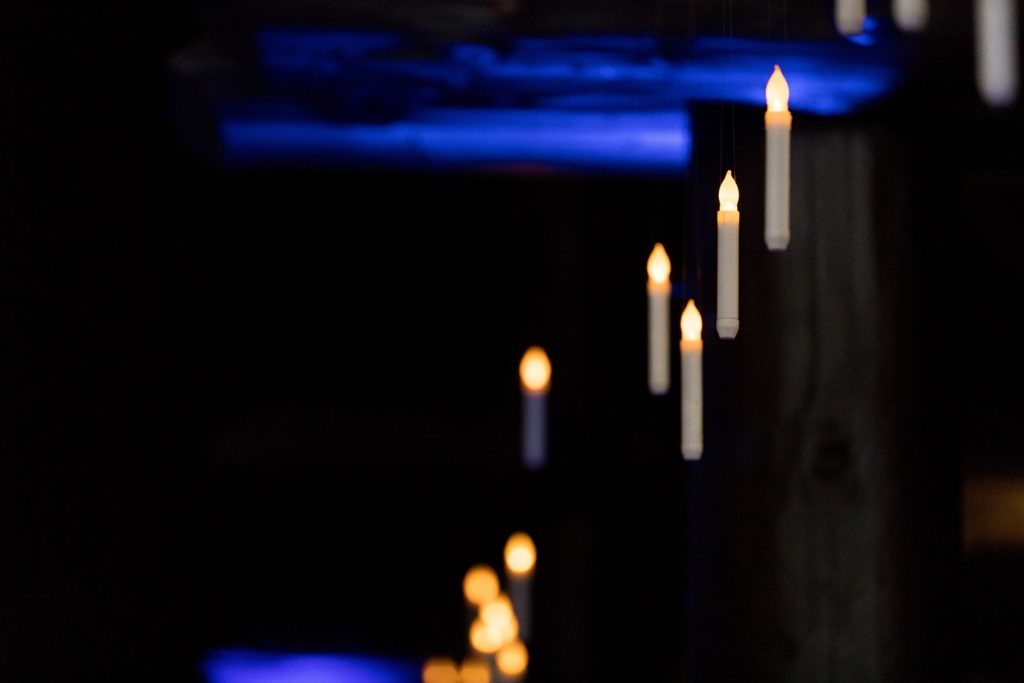 In order to replicate the Great Hall from the “Harry Potter” films for a wedding, the Savvy Bride used floating candles and a starry sky.

To add more authenticity, the tables of the reception area were arranged into four rows, each representing the Hogwarts Houses. Guests were able to determine their seating arrangements along with their Hogwarts House by examining the Marauder’s Map seating chart topped with the Sorting Hat. 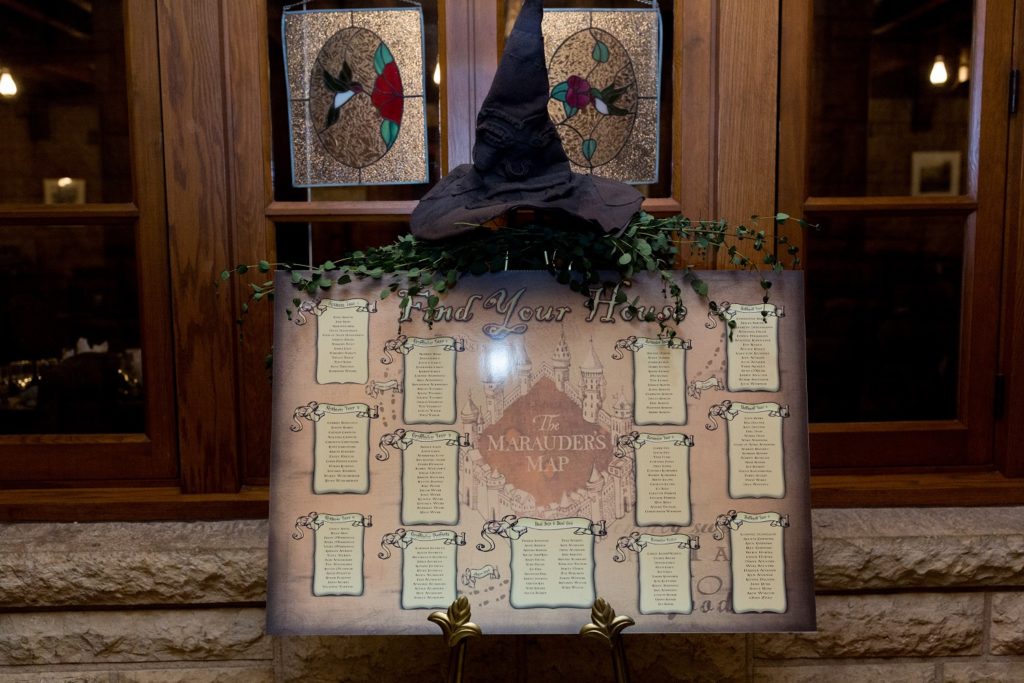 The guests could determine their seats and Hogwarts House by referring to the Marauder’s Map seating chart.

While all of this is already very impressive, your jaw will drop at the sight of the four House tables. Each table was adorned with specific decor to capture the essence of each House. The head of Hufflepuff House, Professor Sprout, inspired the look and feel of the Hufflepuff tables with a horticulture theme, the Muggles’ answer to Herbology. The Gryffindor table featured nods to Harry, incorporating his love of Quidditch by adding scoring hoops and his Nimbus 2000. Despite having very little Ravenclaw representation in the films, the planners looked to the books and used the starry carpet and ceiling of the Ravenclaw common room to inform the aesthetics of the Ravenclaw table. Being that Slytherin House was mostly occupied with members of wealthy wizarding families, the Slytherin tables were meant to represent formality and regality. And lastly, each table was set with plates, napkins, and wands arranged to form the symbol of the Deathly Hallows. It is extraordinary attention to detail. 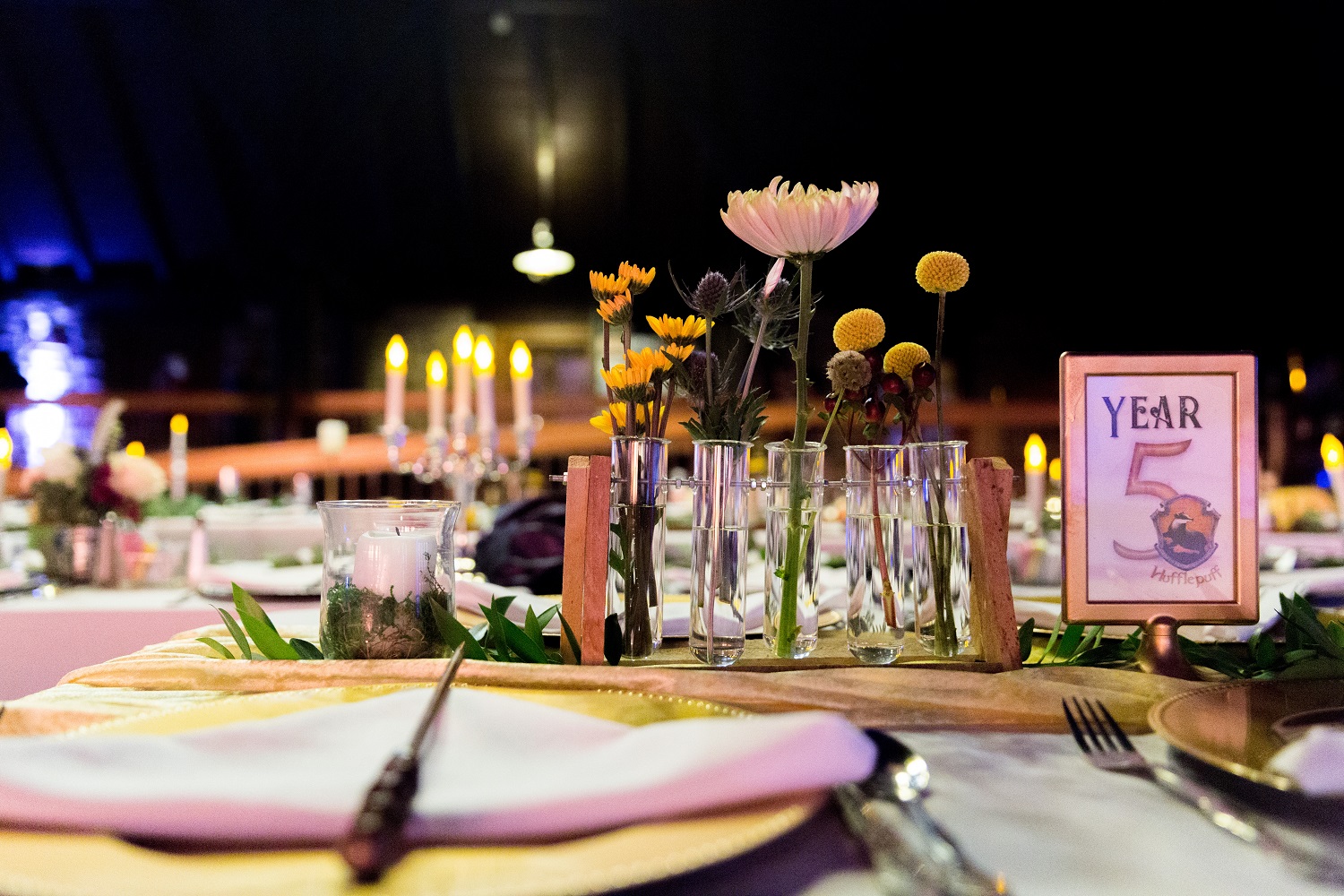 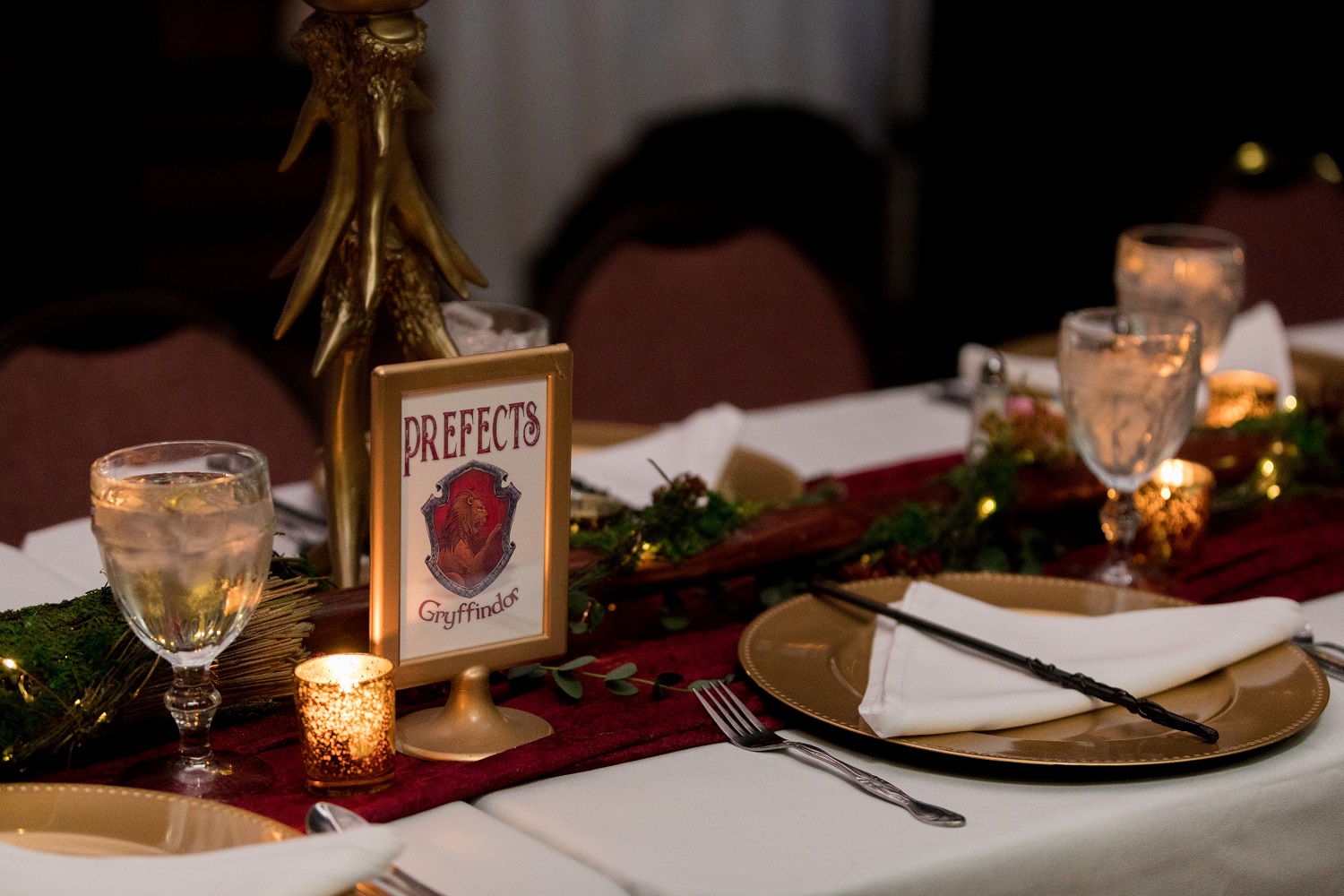 The theme of the Gryffindor table was inspired by the Forbidden Forest. 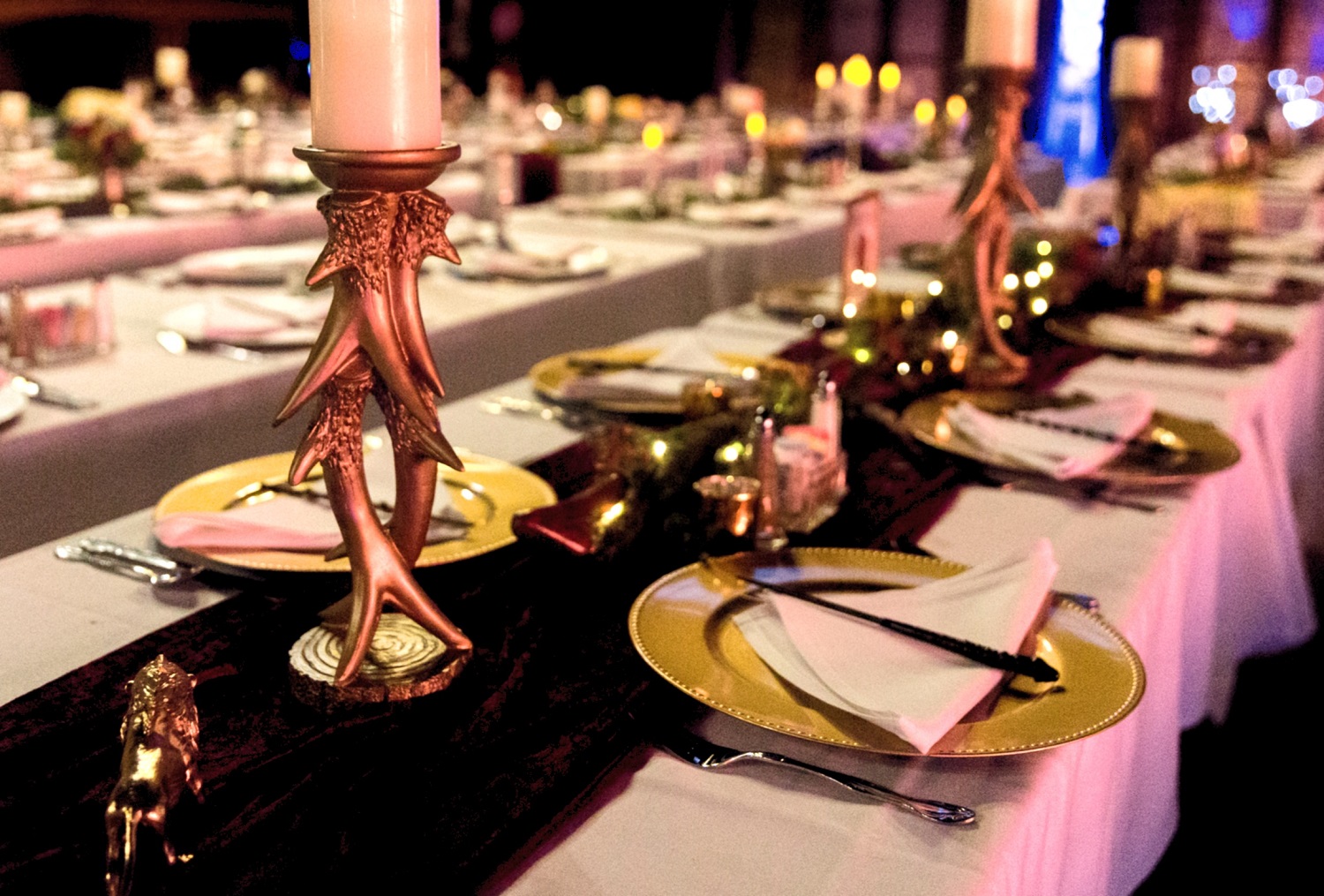 The plates, napkins, and wands were arranged to resemble the symbol of the Deathly Hallows. 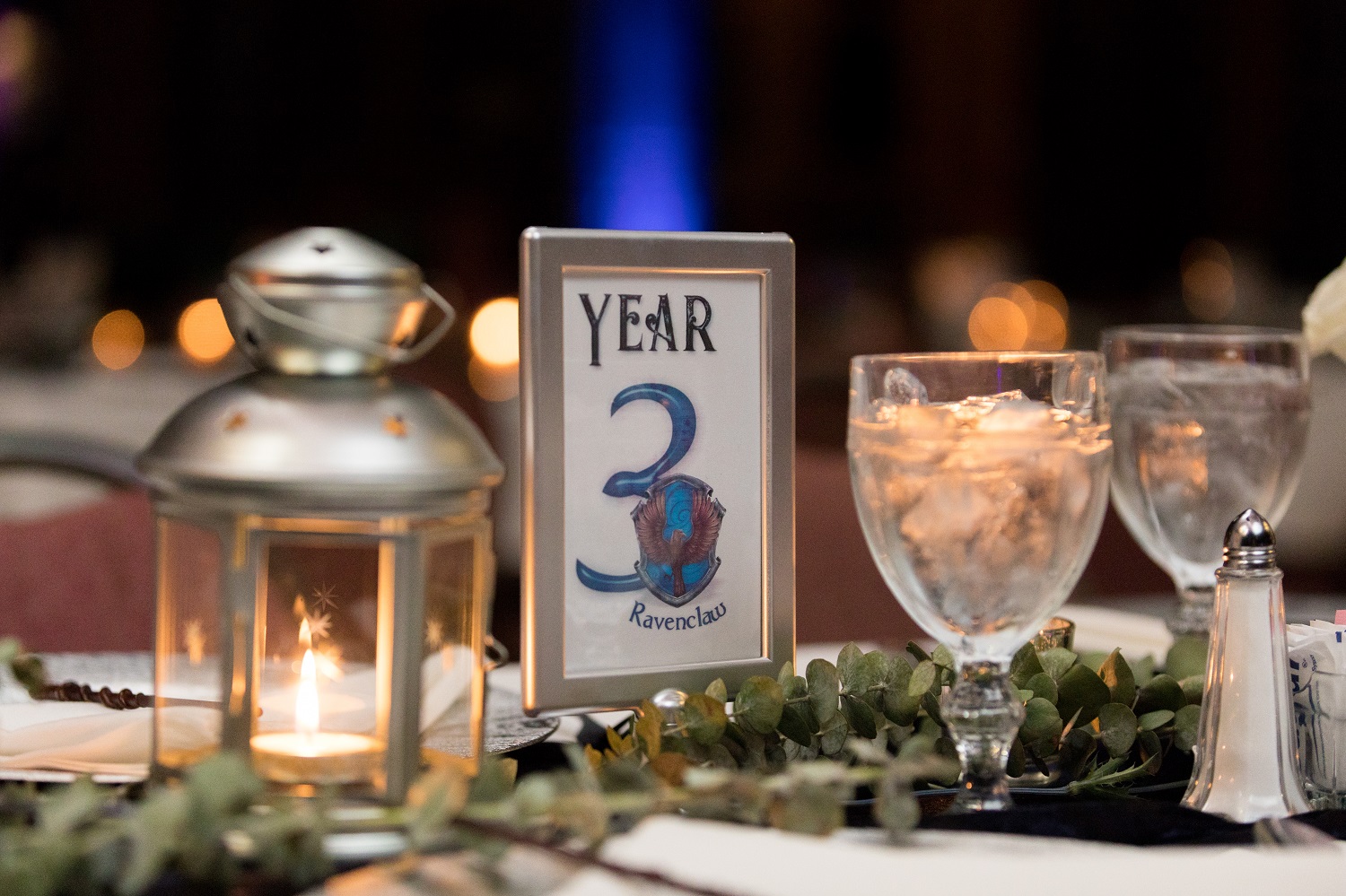 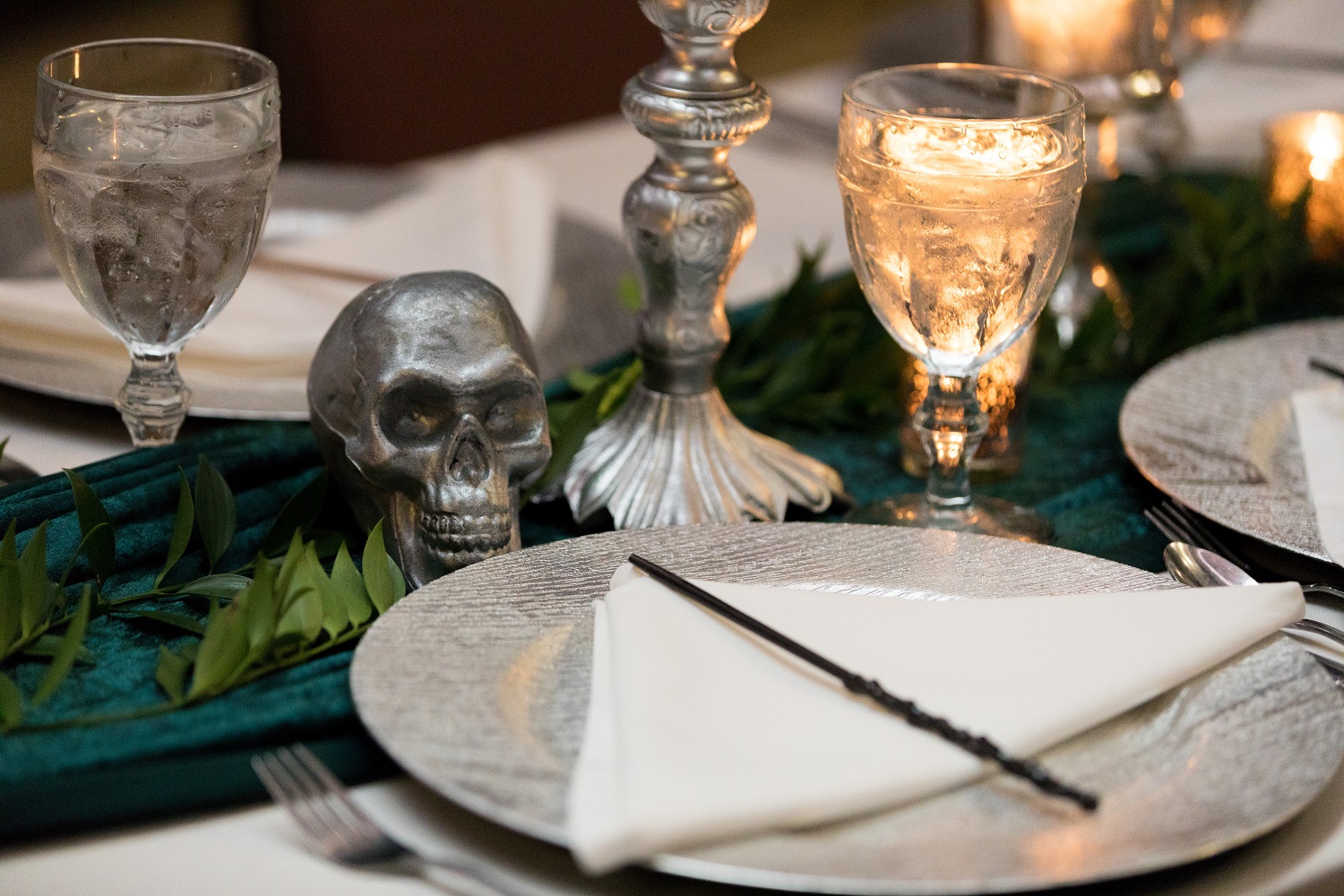 Inspired by the members of Slytherin House, the Slytherin tables were supposed to appear more formal compared to the other houses.

Thankfully, the couple was as impressed as we were. The owner of the Savvy Bride, Wendy Markum-Scanlan, recalled that the couple was “blown away” by the Great Hall setup.

The couple was absolutely blown away. They did the long tables so when they walked in, it was just… They felt like they had walked into the Great Hall – as close as we can get to making it into a multimillion-dollar movie set. But for them, it was a great deal of fun.

Not only was it beautiful, ornate, and tasteful based on the photos provided by Stephanie Bannon Photography, but there was also a bit of cheeky fun added to the reception. Potter fans who enjoy beer pong will certainly get a kick out of the “Quidditch pong” setup. 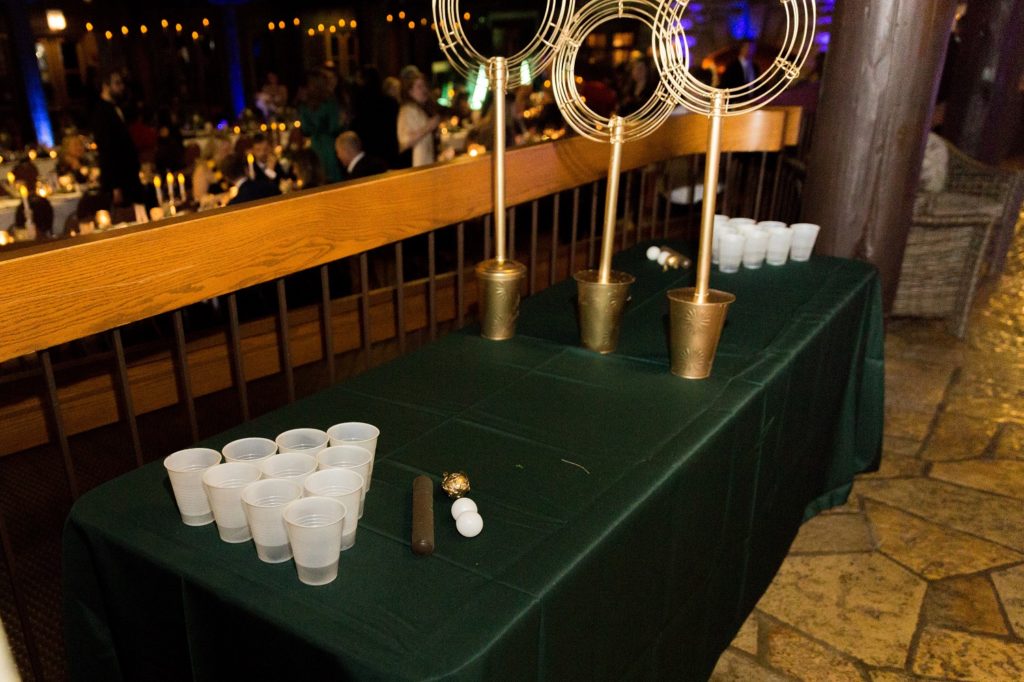 At the reception, guests were able to play Quidditch pong instead of beer pong.

The scoring hoops add a healthy amount of competition and difficulty to the game. If they have not already, Muggle-borns should make Quidditch pong a mandatory drinking game at any gathering.

Were you recently joined in matrimony at your very own Hogwarts? Or did you have a chance to attend a Potter-themed wedding as a guest? We’d love to hear from you. Please email us or tag us on Instagram.

Need more Potter-themed romance in your life? With Valentine’s Day just around the corner, why not take your significant other on a romantic outing based on Harry Potter? We recently featured a list of events that you can take your partner to for Valentine’s Day.