Review and Giveaway: Win a Pair of Magical Shoes from Fun.com!

We had the opportunity to review two very unique character shoes from the Wizarding World, specifically for the characters Harry Potter and Luna Lovegood. Both shoes are not only inspired by the characters but also look like they walked straight off the set of the films. So if you want to show off your Gryffindor pride or Luna-ish quirkiness, you’re in for a treat!

The Harry Potter Quidditch shoes not only look stylish, but they are also super comfortable and have many cool design features. The shoes are made of vinyl soles and faux leather, the prominent colors being red, brown, and gold. They look similar to Converse sneakers with just a smidge more magic. 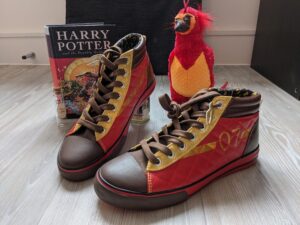 Just putting on these shoes, you feel like you are a part of the Gryffindor Quidditch team. The printed graphic on the outer side features a big golden “07,” which is in reference to the number Seekers wear on their Quidditch robes.

On the back, there is a golden print that says “H. Potter,” and the insides of the shoes are covered with little Golden Snitches. There is even a Golden Snitch ornament on the top of the shoes. Wearing these amazing shoes makes you feel like Harry whenever he caught the Snitch from just under the other Seeker’s nose! 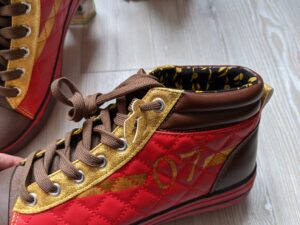 Close-up of the new Harry Potter Quidditch shoes showing the Golden Snitch ornament, the number seven print, and the little Golden Snitches that are printed inside the shoes

I had seen a photo of these before they arrived at my doorstep and was skeptical of how well the print and colors would come out. My concerns were absolutely unfounded because the shoes look even better in reality. They are light, yet due to the leather are just the right shoes for the British – oftentimes wet – weather conditions, and they’re super comfortable and cozy. The colors are vibrant, and the gold glitters just a tiny bit. If you are looking for elegant, sporty, and yet magical shoes that show off your House pride, these shoes are perfect for you! 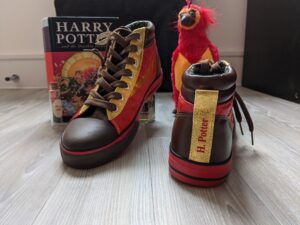 Harry Potter Quidditch shoes have an “H. Potter” name tag on the backs of the shoes with red lettering on a golden patch matching the Gryffindor color scheme.

When I found out I was going to receive a pair of these Luna Lovegood shoes to review, I was over the moon. Style-wise, they couldn’t be a better fit for me, between the bright colors, the bling, and the animals scattered across them.

I never expected a pair of shoes to be a philosophical fit, but these are! Along the bottom edge in gilded letters are words that are near and dear to my heart: “Those who mind don’t matter” and “Those who matter don’t mind.” It is a shining (and shiny) reminder that who we are and what we hold dear don’t require approval from anyone but ourselves. The people who are good for us understand and accept that. Luna Lovegood seems to know this better than anyone. She is supremely comfortable in her own skin, even to the point of eccentricity. 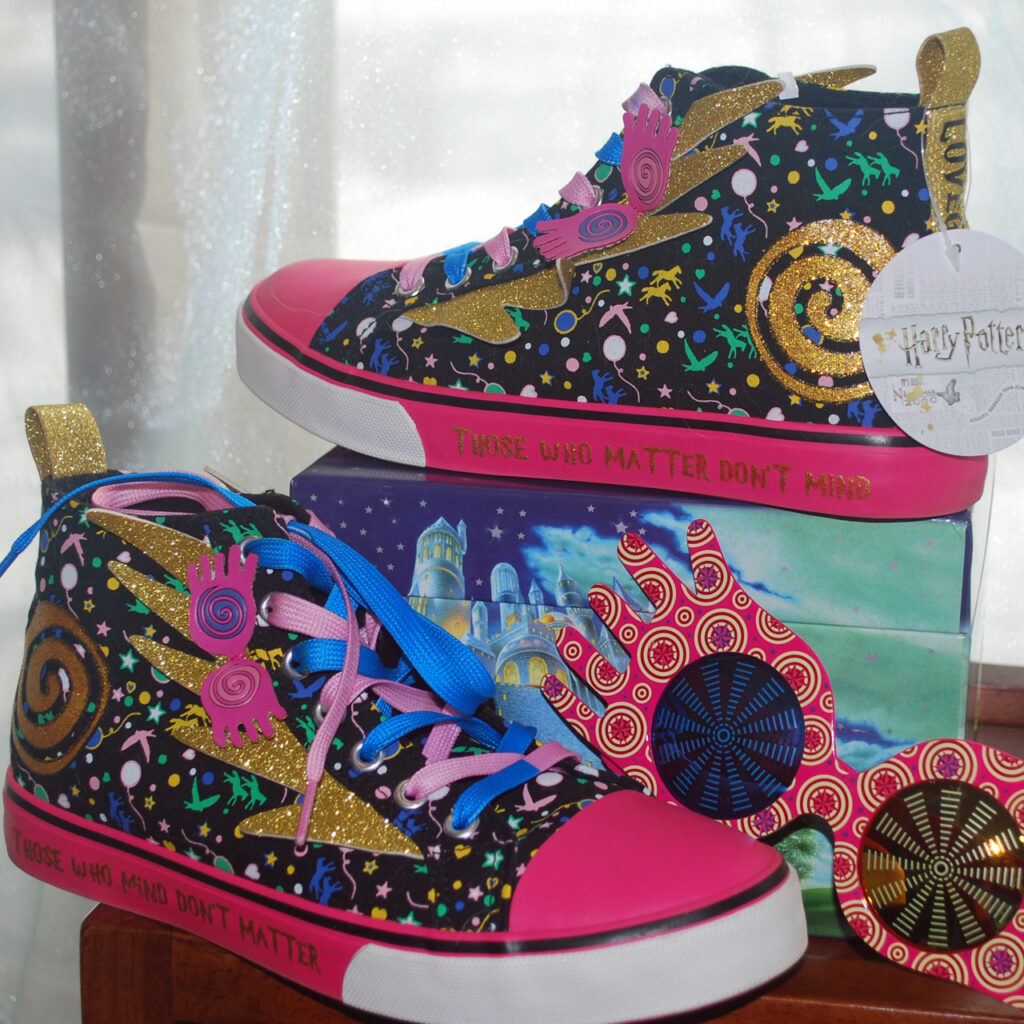 The Luna Lovegood shoes perfectly capture Luna’s character with their bold print and colors. The side of the soles has the inscription: “Those who mind don’t matter. Those who matter don’t mind.” 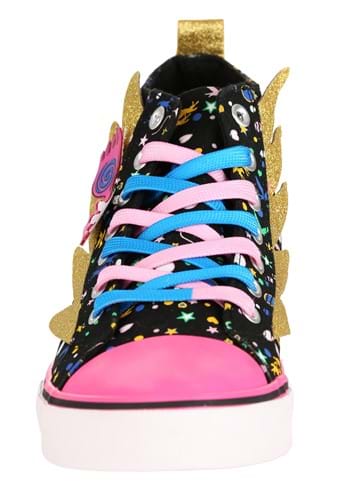 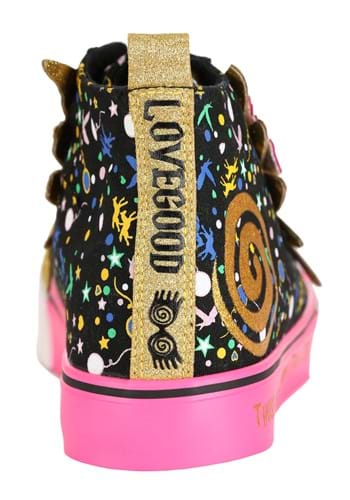 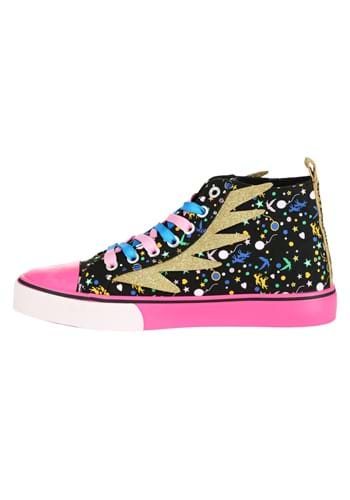 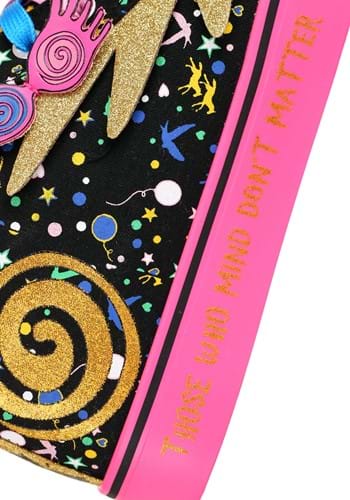 I’m happy to let my inner Luna shine through by sporting shoes with the name “Lovegood” emblazoned down the back. There is more than a little Luna in me, after all; I do have some less-than-mainstream beliefs in addition to my brightly colored hair, unicorn dresses in petticoats, and now Luna shoes!

Anyone familiar with Luna is sure to recognize her in these shoes. If a person does ask about these cute and crazy kicks, you now have the perfect way to indoctrinate… I mean… introduce them to Luna and the rest of the wizarding world. 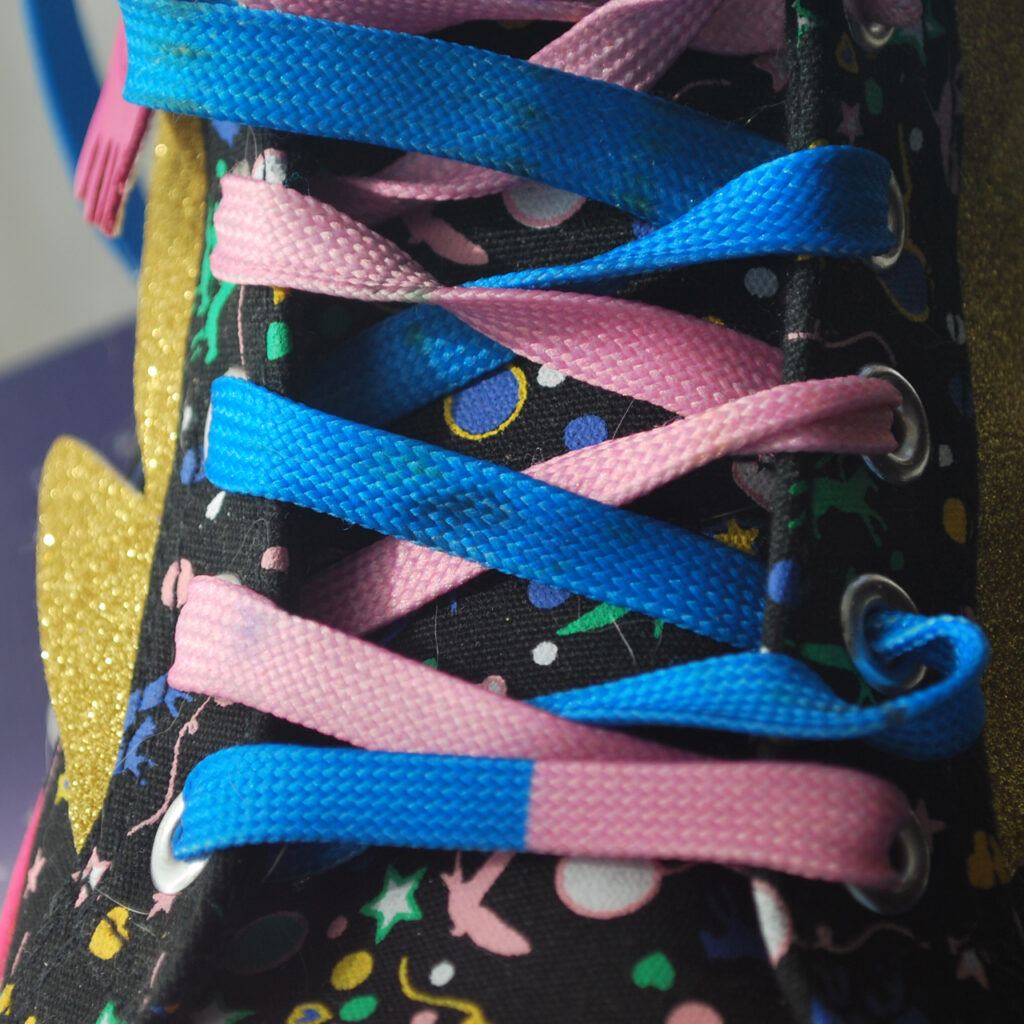 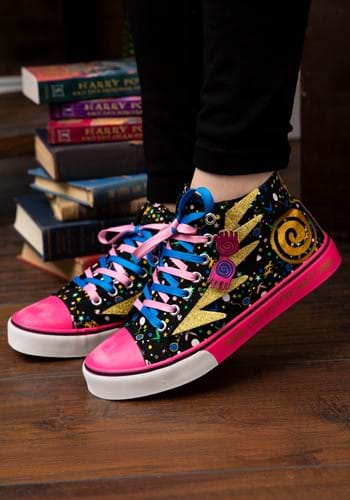 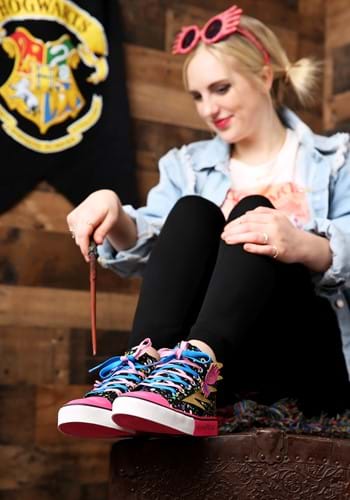 What I don’t love:

I think it was worth every step I took (see what I did there?) to be able to get a comfortable fit with these shoes. Every time I catch a glimpse of them on my feet, I get a little burst of happiness.

Two pairs of character shoes were provided by Fun.com. All opinions belong to the reviewers.