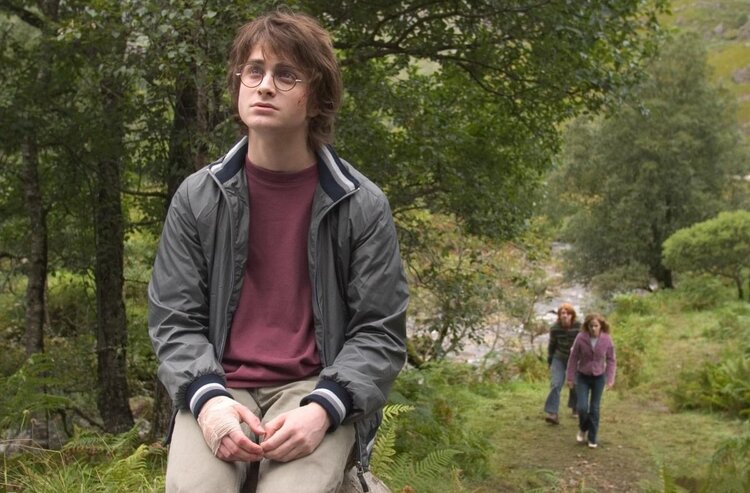 Harry: “What does the Bro Code say about how long I have to wait before asking out Cho?”
—Avery

Harry: “I wonder if my barber got his soul sucked out by Dementors?”
—Liz M.

Harry: “To Obliviate or not to Obliviate. That is the question.”
Ron: “Hermione, what made you think it would be a good thing to give Harry the complete works of William Shakespeare?”
—Friend of Fawkes

When there isn’t much to do at Hogwarts, students like to sit back, relax, and watch the Whomping Willow murder bluebirds.
—Sam

Harry: “I wonder how long I can stay being a third wheel until they notice.”
—Shane

Ron: “There he is! Contemplating the meaning of life again, I bet.”
Hermione: “Let’s put a stop to that before he shows up with some rubbish liberal arts degree.”
—Troi

Ron and Hermione headed over to their favorite romantic spot, only to find that Harry had taken it over for his angsting.
—Sam

Me watching Harry Potter while there’s a pandemic and all my friends are going crazy.
—Megan

When Ron’s trouser leg is more flexible than you.
—Millie

Hermione: “C’mon, Harry. The Hogwarts Express is leaving!”
Harry: “No, I won’t go back to the Dursleys again! I’ll just hide in the forest until the next school year starts. No one will know the difference.”
—Sam

Hermione: “I told you we’d find him, Ron, if we just followed the pungent scent of teenage angst.”
—Friend of Fawkes

Ron: “He’s doing it again, just staring off into outer space.”
Hermione: “I wonder what he thinks about when he does that.”
Harry: (thinking) “Ginny has nice skin.”
—Katie G.

Harry decided to live in the forest as a wild man because he already had the hair for it.
—Sam

Harry: “Huh, I guess they never caught that Horntail.”
—Patrick

Hermione: “Remember, we have to be really gentle with Harry. I’m sure he’s still processing what happened in the graveyard.”
Harry: (thinking) “Why doesn’t Kansas rhyme with Arkansas?”
—Ashton S.

When you accidentally lose your Indian friend in the refrigerator.
—Saphire

Harry: “I cannot leave this spot. I must sit on this egg until it hatches.”
—Emma

Harry: “Here in Yosemite National Park, I’m sure I’ll be safe from Hermione’s lectures about studying for the O.W.L.s.”
—Sam

Harry: “Why am I a third wheel in my own franchise?”
—Potterwatch101

Ron: “Why is it that Madam Pomfrey could regrow his bones overnight but couldn’t fix his hand?”
Hermione: “You’re looking for continuity in this, the film without haircuts?”
—Gary

Harry: “I wonder… Shall I ever see the Shire again?”
Ron: “Wrong franchise, mate.”
—Harry

When you’ve already given up on your test and your teacher comes to collect it in disappointment.
—Gwenna T.