How Much Would a Hogwarts Education Actually Cost?

Have you ever wondered how much it would cost to attend Hogwarts? Thanks to a new report from Oxbridge, we can now tell you how much you’d have to spend for a seven-year-long magical education in 2021! Let’s split up the costs to build up to the final total.

The first thing all students have to buy is their uniform. A pointed hat will set you back $55.09, while a pair of protective dragon hide gloves will cost nearly $60. Hogwarts students also need three black work robes, which will cost $227.93, and if they want to keep warm in winter, they must spend $142.45 on a winter cloak. Luckily, a robe is hard to grow out of, and one set of uniforms will last the entire seven years.

After a trip to Madam Malkin’s, next up on the list is equipment. All first years must have a telescope, a set of brass scales, and a pewter size 2 cauldron, which, combined, will put you back $371.32. The most important part of any witch or wizard’s inventory is a wand, and one just the same as Harry’s would cost $113.01. A set of crystal phials will cost the same amount as your wand. First years are allowed to take an owl, cat, or toad, and while we don’t know how much a cat or toad would cost, an owl will put you back $161.44. Although first years aren’t allowed brooms, students in later years could spend $1,614.45 for a midrange model.

The final stop in Diagon Alley is Flourish and Blotts. Assuming that Hogwarts students still require the 34 books Harry did, this stop will cost a total of $1,323.81 for every book needed across the seven years of education. However, that price has probably gone down since Lockhart’s departure from Hogwarts; each of his books costs around $80!

Once you’ve purchased all of your equipment, you’re ready to hop on the Hogwarts Express. This is the most expensive part of a Hogwarts education. We don’t know whether students actually paid for their tickets, but based on the fact that a conductor checks these tickets, we can presume it isn’t free. Based on off-peak tickets from London to Fort William, we can guess that every year, students spend roughly $180 a ticket. With four trips on the train expected per year, that adds up to $5,136.91. 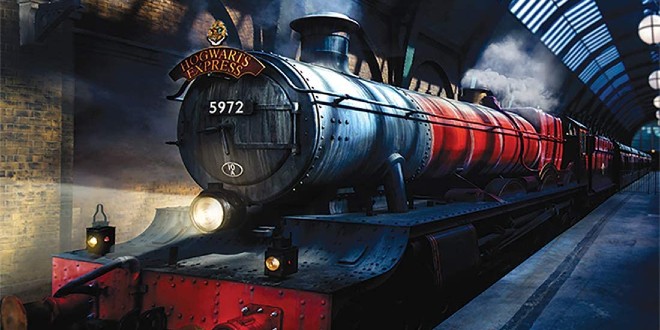 That’s all the necessities covered, but all Hogwarts students want extra change for some tricks and treats. Whether it’s spent on a Chocolate Frog from the trolley lady on the Hogwarts Express, pints of butterbeer from the Three Broomsticks, or a fun trinket from Zonko’s, students’ spending money will differ from person to person. Harry had an estimated 10 Galleons of spending money, which (after inflation) works out at roughly $807.22 over seven years.

All the costs we’ve mentioned so far won’t do much good in actually teaching you how to perform magic. Luckily, this is one cost students don’t have to worry about. J.K. Rowling specified back in 2015 that tuition at Hogwarts was free, with all day-to-day costs covered by the Ministry of Magic. 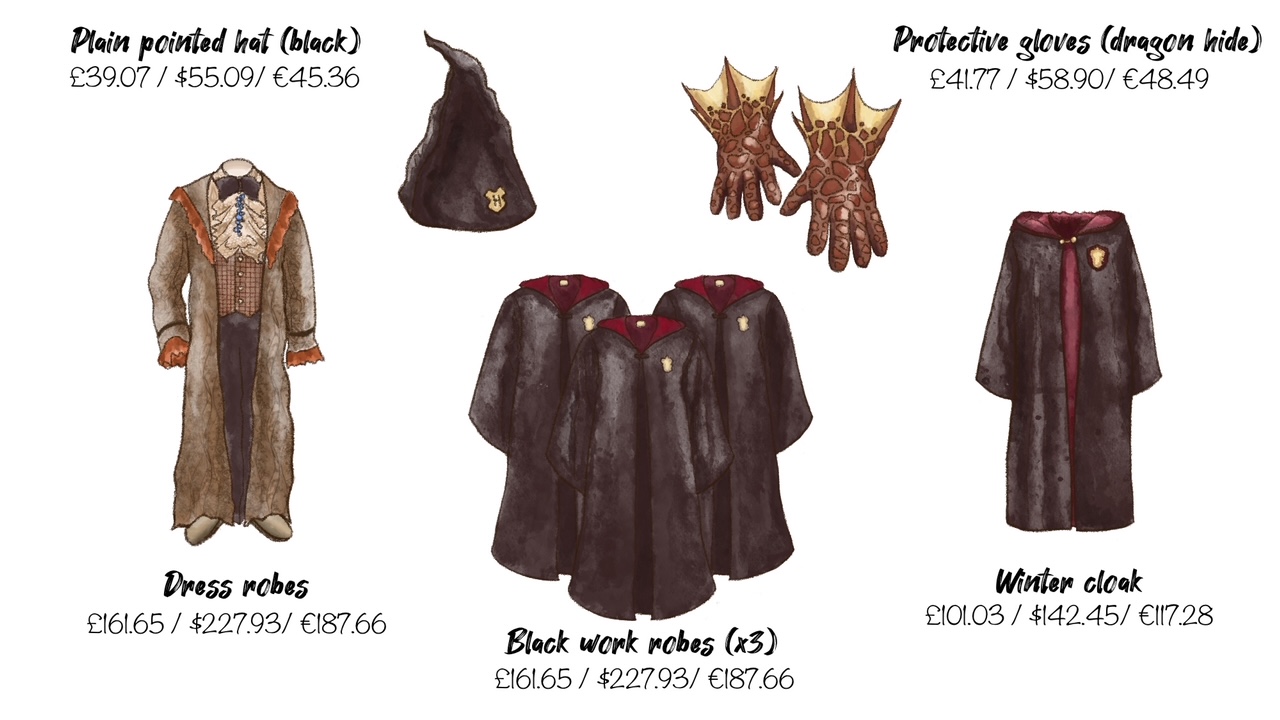 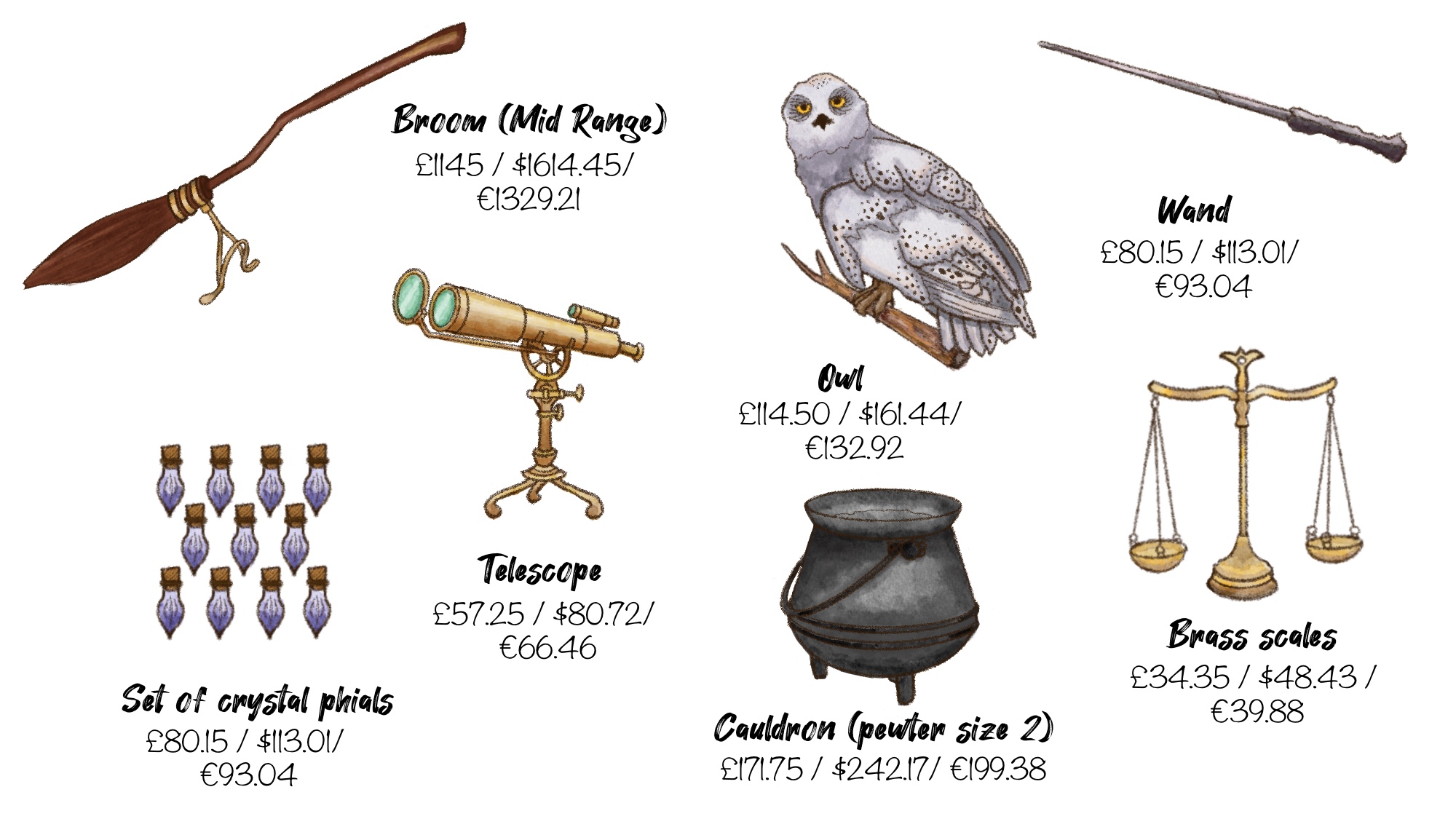 Equipment is important for all students, and Hogwarts students are no different. 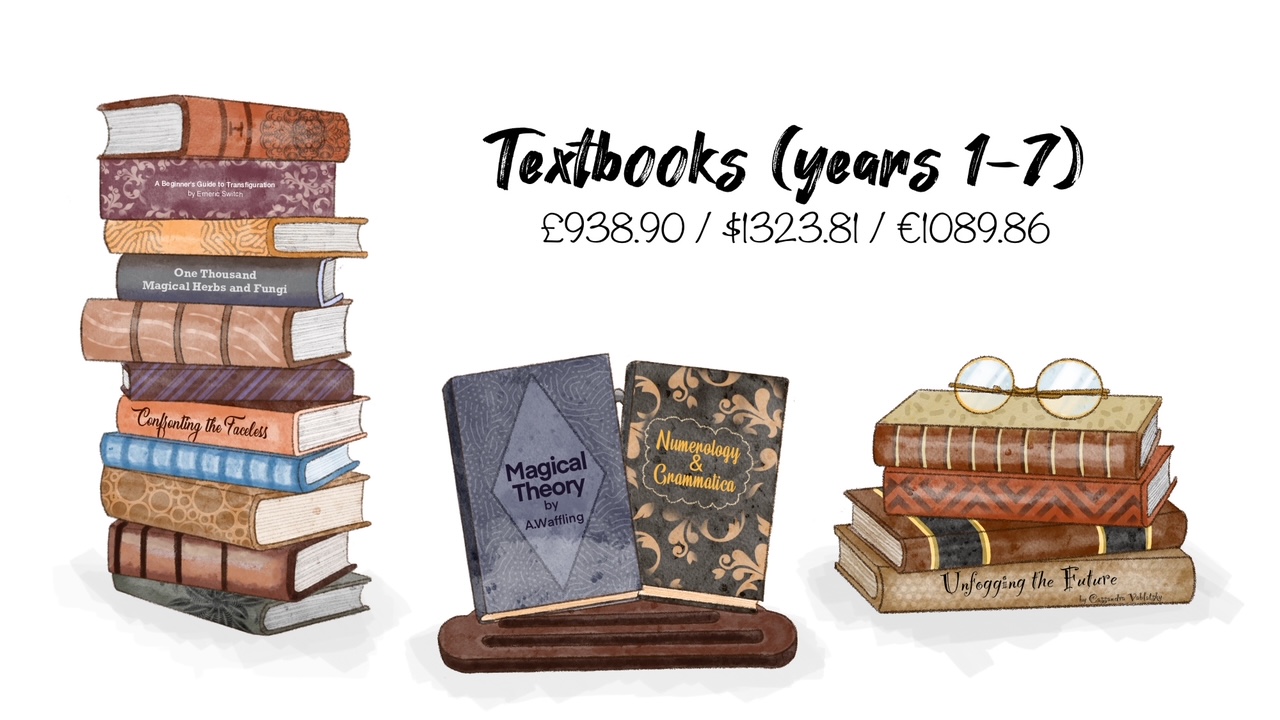 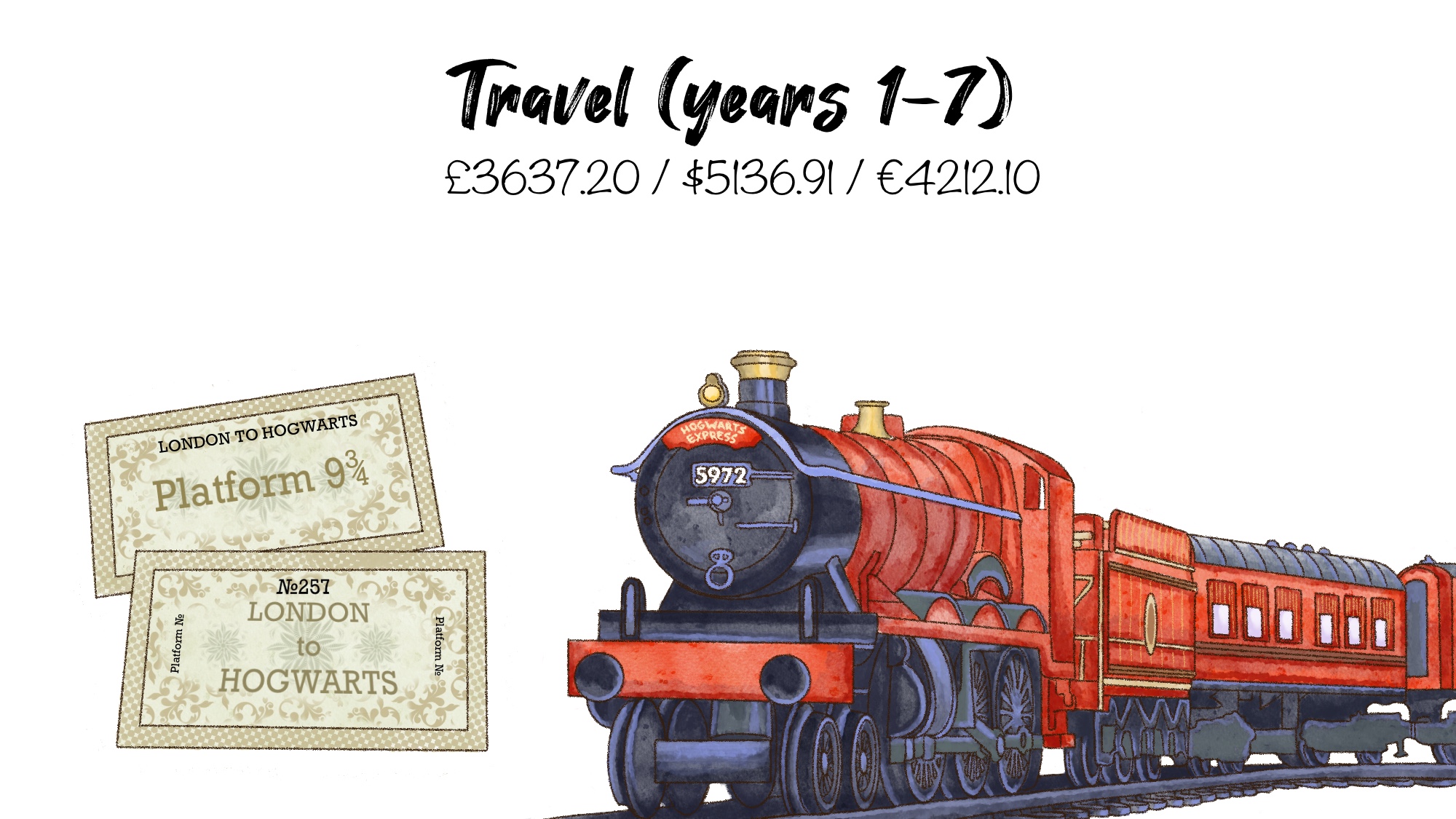 Travel costs account for around half of all the money needed to learn at Hogwarts. 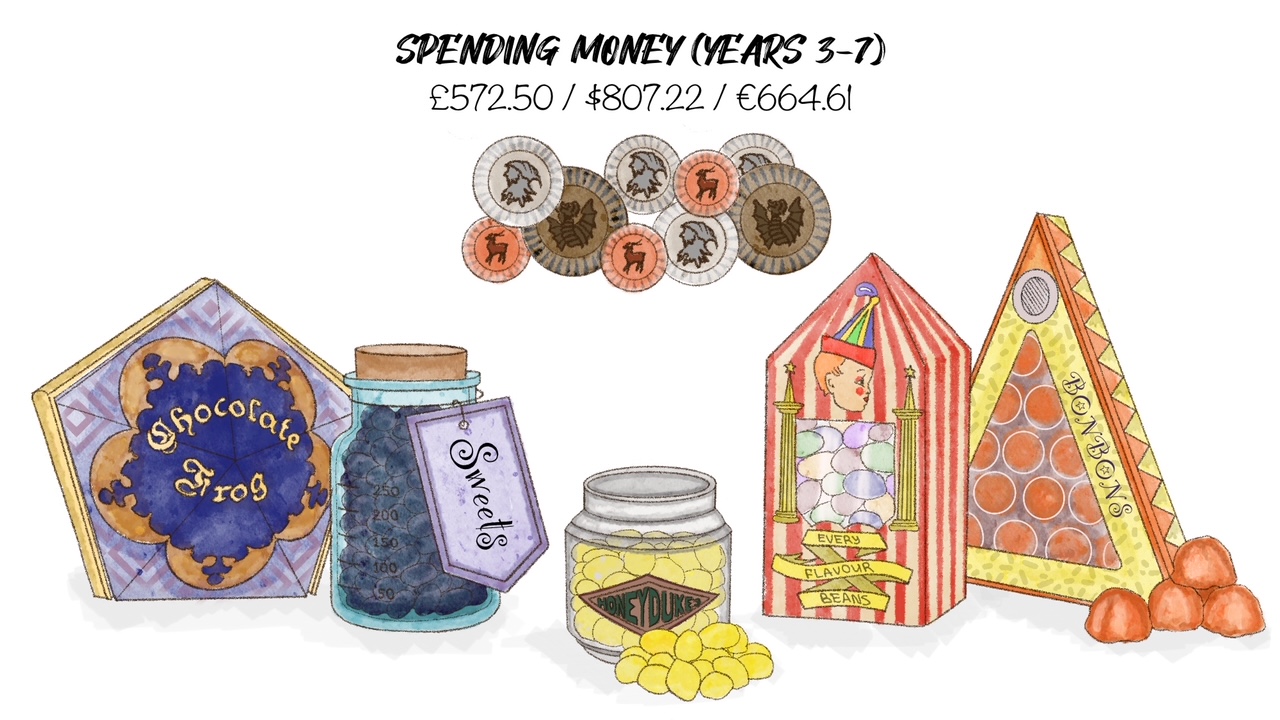 Spending money will differ from student to student.

Are you ready to see the total after adding up all the costs mentioned above? Well, it would cost a witch or wizard 323 Galleons and 2 Sickles, or $10,353.47 in Muggle money, for seven years of education at Hogwarts. Although that sounds like a lot, it actually adds up to less than half of the average price of one year’s private education in the UK. Did this price surprise you? How much did you expect it to cost?