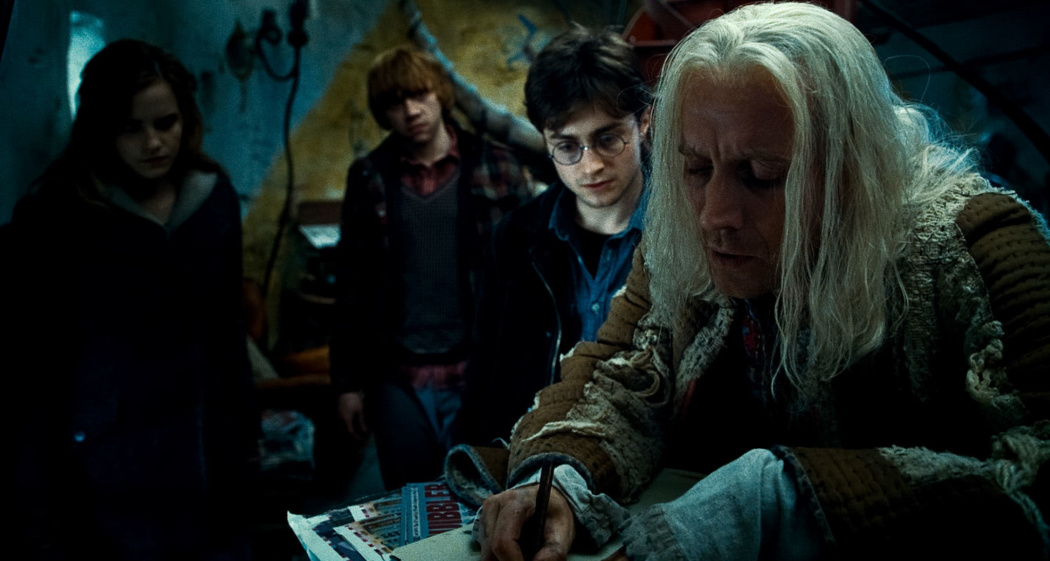 “There! I’ve filled out subscriptions to the Quibbler for all three of you! You’re welcome!”
—Carol P.

Xenophilius: “It’s my job to print the stories that the mainstream media is ignoring.”
Harry: “Yes, but you’ve got to stop it with the anti-vaxxer propaganda!”
—Sam

Xenophilius: “Here is the Elder Wand. The Cloak of Invisibility. The Resurrection Stone. The Fuzzy Slippers of Harry Styles. Together, these make up the Deathly Hallows.”
—Emma

Ron: “Hey, that looks like a pepperoni pizza.”
Hermione: “No, it does not. It looks like an ice cream cone.”
Harry: “STOP TALKING!”
—Luna

Harry: “Look, we’re in kind of a hurry right now. Will you help us after you’re done with your screenplay?”
Xenophilius: “Maybe.”
—Sam

Xenophilius: “Here are the ingredients to my tea, if you need to give them to the poison ward at St. Mungo’s.”
—Mary

The trio thought Xenophilius had lost it when, after drawing the Resurrection Stone, he sneezed on the parchment and said that it was a part of it and the drops were all the dead people to have come out of the stone.
—Marcus

Harry: “He says he’ll help us once he’s done with his Reylo fanfic.”
Hermione: “Honestly, I always said that ship was trouble!”
—Sam

As Hermione wasn’t that important in the scene, she didn’t get to be under any light.
—Marcus

“Not now. I’m hard at work on Harry Potter and the Cursed Child 2, in which Neville becomes a Death Eater because he got a paper cut one time.”
—Sam