Christmas in the Forest of Dean: The Silver Doe – Part 1

As Helen Cooper has written in her wonderful book The English Romance in Time (2004), forests are evocative places:

The philosophers of the twelfth-century school of Chartres adopted the word silva, forest, as their term for chaos, matter than had not yet been given created form; and it may not be coincidence that the quest romance was developing its own characteristic landscape of forest at the same time. The romance forest is the place that conceals brigands and monsters, where the knight’s claims to chivalry are tested, his values and his sense of self challenged… the point of any forest, named or not, is that you can get lost in it.1

These ideas lie behind much of the action that occurs in the Forbidden Forest – the place Harry first learns of his death at Voldemort’s hands and where he will finally choose to face that fate. But there is also another forest in Harry Potter, a forest near to J.K. Rowling’s childhood home – one of the wilder forests of Britain, replete with wild boar and megalithic monuments – which no doubt inspired Rowling’s thinking about forests when she first created the landscape of Hogwarts: the Forest of Dean. 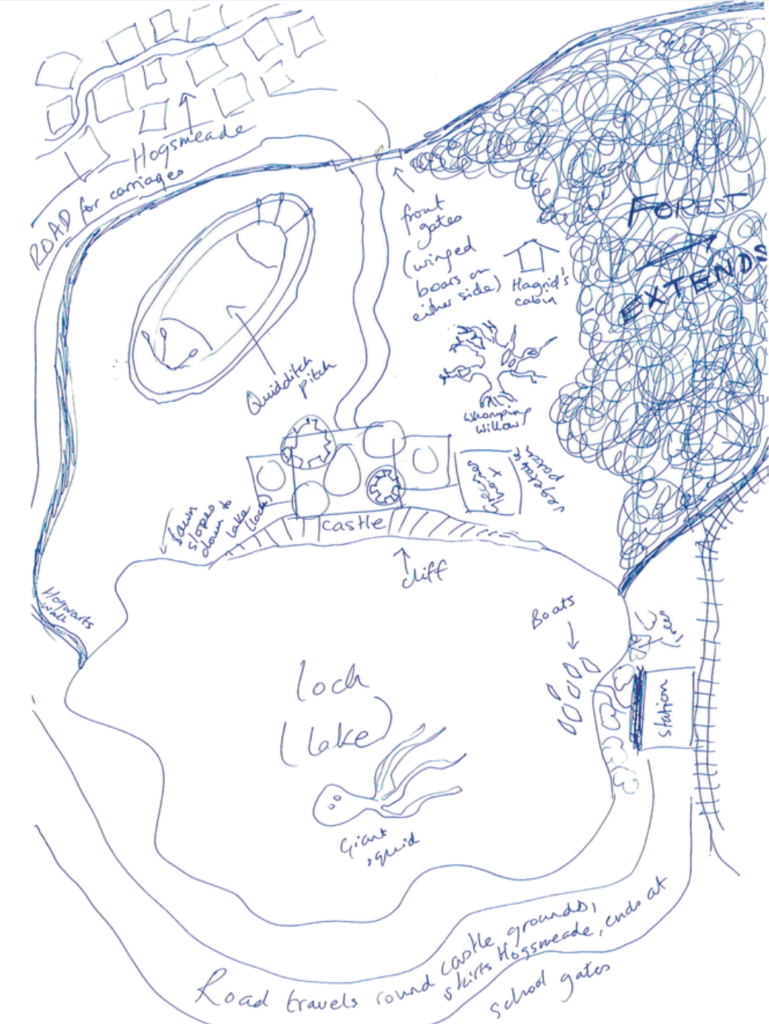 This map of the Hogwarts grounds was drawn by J.K. Rowling.

Harry and Hermione spend some of the final Christmas of the series in the Forest of Dean. Hermione takes Harry there on the morning of Boxing Day, and it is on the evening of that day that Harry sees the silver-white doe.

‘Where are we?’ he asked, peering around at a fresh mass of trees as Hermione opened the beaded bag and began tugging out tent poles.
‘The Forest of Dean,’ she said. ‘I came camping here once, with my mum and dad.’” (DH 364)

Hermione returns to the forest intuitively – it is she who chooses almost all of the locations to which they travel in Harry Potter and the Deathly Hallows (and it is the place where Ron will find them again). Hermione returns to the Forest of Dean because it was a place she knew as a child, and in this scene, the author is likewise returning to a place of her childhood. Rowling lived on the southern edge of the forest – in Tutshill – from 1974 to 1983. During this time, the Forest’s most famous son, Dennis Potter, had a TV series on the BBC called Pennies from Heaven (1978), partly filmed in the Forest of Dean. Three years after Rowling left the area, Dennis Potter’s most influential TV series – The Singing Detective (1986) – was released, and it was likewise set, in part, in the forest. In Dennis Potter’s work, the Forest of Dean – in keeping with the traditional literary role of the forest from medieval romance to the Shakespearean “Green World” – is a home of psychological truth.

Prior to the release of Deathly Hallows, Dennis Potter’s work formed the most well-known cultural reference for the Forest of Dean, and it is difficult not to wonder if his surname may not have (at least subconsciously) affected Rowling. In a satisfying closing of the circle, Michael Gambon, who became a household name playing the starring role in Potter’s The Singing Detective, is now most famous for his portrayal of Dumbledore.

In Dennis Potter’s Singing Detective, the significance of the Forest of Dean stems from the protagonist’s childhood – his devastating illness and the mystery story he is spinning are both rooted in what happened there when he was a child. The silver-white doe which Harry sees in the Forest of Dean likewise carries with it some of the same emphasis on revelation rooted in childhood experience. As Rowling has explained (and as we see with Tonks’s Patronus), “the Patronus often mutates to take the image of the love of one’s life (because they so often become the ‘happy though’ that generates a Patronus);” and the strength of Snape’s love is expressed in the form of his Patronus: “your Patronus only changes if it’s eternal love, unchanging – part of you forever.” 2 The crucial truth of Snape’s adulthood is that it remains rooted in the loves and emotions of his childhood – in Harry Potter, as in Dennis Potter, the child is the father to the man. The white stag Patronus Harry produces in Harry Potter, and the Prisoner of Azkaban works in a similarly psychological way. At the climax of the novel, Harry crouches behind a bush by the lake, waiting for his father to come and save him. Harry’s desire is to finally see again the lost father he thought he had seen illuminated by the stag’s light, but he discovers his father within himself instead. 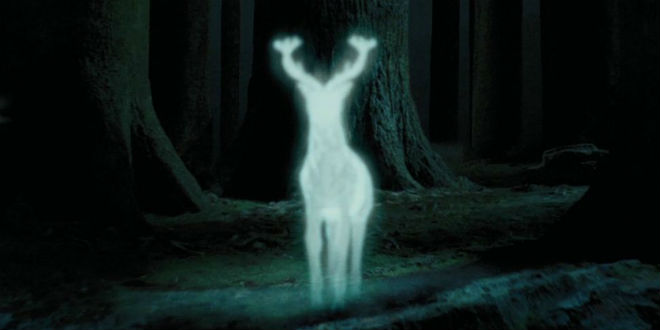 The reprise of that moment in Deathly Hallows – the Christmas appearance of the silver-white doe Patronus – is evocative partly because of its echo of that moment in Azkaban and partly because its form points forward to the central secret of the series. But the power of this scene with the silver-white doe (one of my absolute favorite moments in the whole of Harry Potter) is due as much to its mythic depths as its psychological ones.

The importance of the moment is marked by the fact that the doe Patronus is given her own chapter title – “The Silver Doe” (Deathly Hallows, Chap 19) – and by the fact it had been foretold in a dream many years before. Four years earlier, Harry had dreamt of following a “silvery white” animal through a dark wood (PoA 265). On Boxing Day, in Deathly Hallows, as Harry sits alone in the dark forest, “bright silver light appeared right ahead of him, moving through the trees… It was a silver-white doe… He set off in pursuit” (DH 366).

The Forest of Dean, where Harry encounters the doe, is an ancient place, inhabited since Mesolithic times, and white deer belong, likewise, to ancient stories. The Forest of Dean is now in England, but it is the place where England meets Wales, and the forest may at one time have been part of the Welsh kingdoms of Gwent and Ergnyg. The silver-white doe Harry meets in the forest has close ties with a number of ancient Welsh texts and, in particular, tales of Arthur. 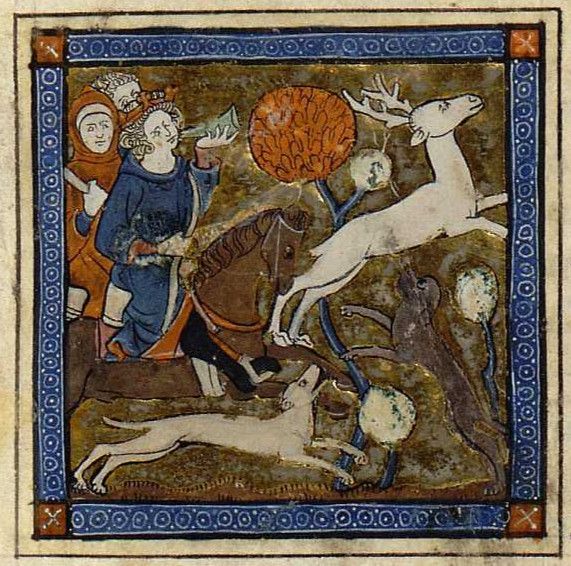 This moment in the Forest of Dean is the most Arthurian passage of the series. The silver-white doe exerts a resistless pull on the hero and leads him away from his friend and towards a pool of water where he will find the sword with which he can defeat his nemesis. The strong Arthurian parallel in Harry Potter and the Chamber of Secrets of Harry having the purity of heart to draw the Sword of Gryffindor from the Sorting Hat (like the young Arthur drawing the sword from the stone) is redoubled in this scene, as the sword returns to him. There are famously two myths, likewise, for the origins of Arthur’s sword – the Sword in the Stone, and the Lady of the Lake – and here the Sword of Gryffindor returns to Harry from the depths of a forest pool, just as Arthur is given Excalibur by the Lady of the Lake. But what is less well-known is that the prelude to this quintessentially Arthurian scene – the white deer – is likewise drawn from Arthurian myth.
Tomorrow’s blog will look at the evidence for white deer in Arthurian legend and why it is peculiarly fitting that a silver-white doe should appear to Harry at Christmas in the Forest of Dean.

1Helen Cooper, The English Romance in Time: Transforming Motifs from Geoffrey of Monmouth to the Death of Shakespeare (Oxford: Oxford University Press, 2004), 70.