“This Magic Spell You Cast”: How Draco Met Astoria

The following is an imagining of how Draco might have met Astoria. All fan art is by the author.

It was just another snowy December evening in Wiltshire when you’d rather hide under a cozy blanket and cast a warming charm to keep extra warm. Despite the cold, things had begun to seem better again, especially since the heat in the wizarding world about his family had subsided following his trial.

He checked the time, changed into his new green robes, and put a thick coat of Sleekeazy’s Hair Potion to his white-blonde hair before apparating to Hogwarts for their first reunion one year after the defeat of Voldemort.

Except for a few minor renovations here and there, Hogwarts remained unchanged. The great hall had been elaborately decorated, and the golden lights only added to its splendor. However, a ghost of all that happened a year ago lingered in his thoughts and the minds of others, he could tell.

Draco was taking in the view in front of him, reminiscing about his time at Hogwarts, when he felt a tap on his shoulder, which made him jump. As soon as he turned around, he was pulled into a hug by his friend Pansy Parkinson. 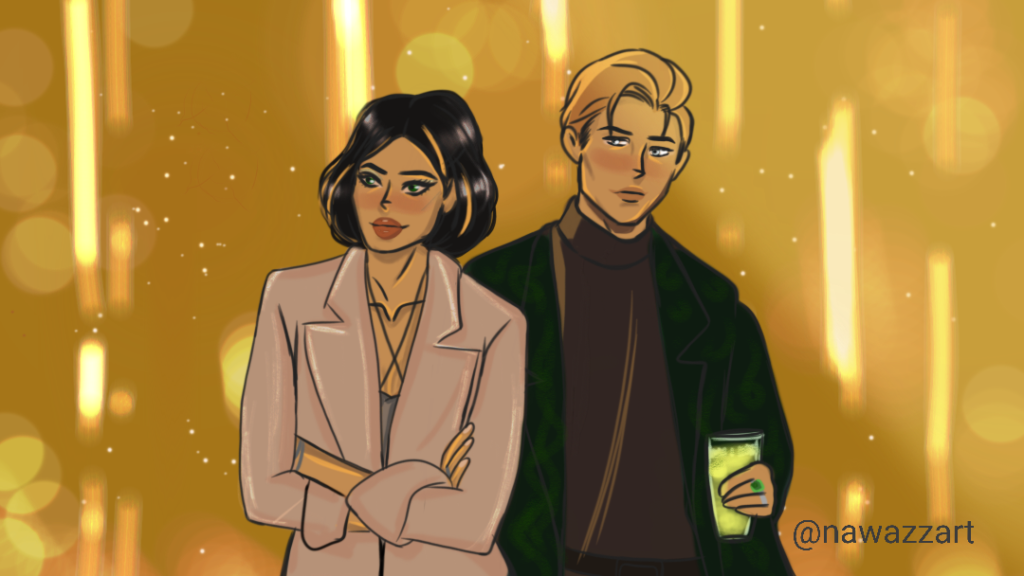 “Oh, Draco! It’s great to have you here. I knew you’d come.” Draco could feel a smile tugging at his lips as she said this.

The next two hours flew by as they talked about their old lives and experiences at Hogwarts.

He was talking with Pansy when he noticed a girl at the drinks counter in front of them, as well as two others he thought to recognize as Millicent Bulstrode and Daphne Greengrass. She seemed shy and spoke slowly, often looking down, a glass of bubble juice in her hand, and Draco couldn’t help but feel something spark up in his heart whenever she smiled. Her long, straight, ebony hair flowed down the back of her emerald sheath dress, and her pale form could give Draco’s a competition.

“Who is that, Pans?” He whispered as he sipped his green apple juice.

“That? She’s Daphne’s younger sister, Astoria. She was two years below us,” Pansy said, “Would you like to meet her?” She asked, quirking an eyebrow as she met his gaze.

“Do you think I should?” He inquired, hands fumbling.

“What’s the harm in trying? Come along.” Pansy chuckled as she took Draco’s hand in hers and led him to Astoria.

Astoria was standing alone at the counter, staring around the hall while tapping her long bony fingers on her glass. Her sister and friend were now walking towards another group of Slytherins.

“Oh, I need to go, darling. Blaise is calling me. See you around.” Pansy saluted him and walked away. He’ll deal with her later.

For someone so bossy and complacent, Draco Malfoy could sometimes be very shy, and that could be seen at that moment when he carefully clutched his handkerchief to wipe his sweaty hands before keeping it back in his pocket. 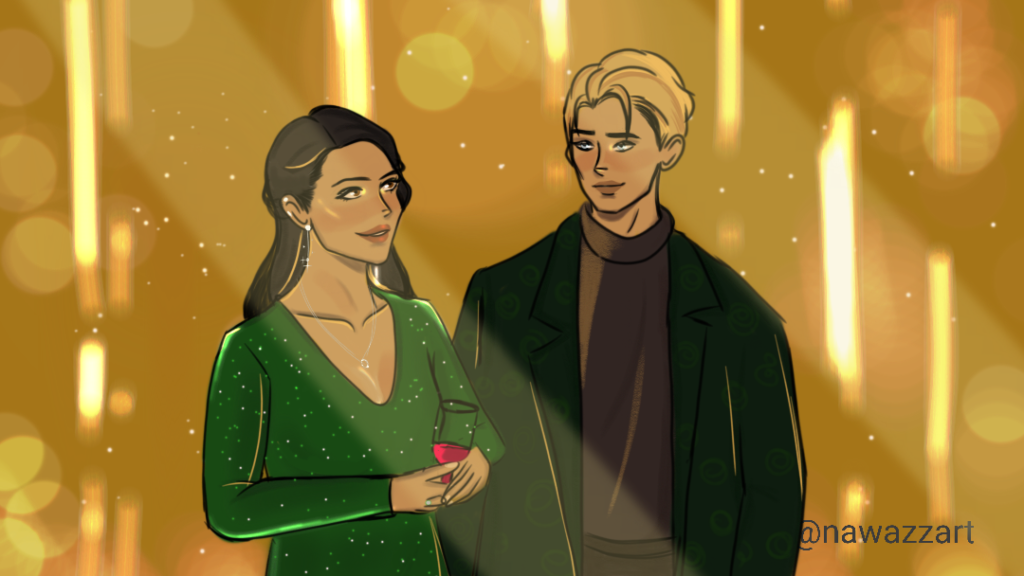 He managed to gain composure again, straightening his posture as he reached Astoria.

“Hello, Miss. Greengrass,” he said, pleased with himself for not tripping over his tongue while speaking. Why was he so nervous?

Astoria lifted her head to meet Draco’s gaze, blinking twice before smiling that beautiful smile of hers. Oh, if a smile could kill, Draco would be gone by now.

“Mr. Malfoy. Nice to meet you.” She said, looking at him.

“Do you have a favorite dessert?” He asked abruptly, holding his breath.

Who even asks such questions to a lady during their first conversation? His father shouldn’t hear about this. He was taken aback, though, when her face brightened up, and she gazed at him with a smile in her dark eyes, which stood in stark contrast to his silver orbs.

“I love Cauldron Cakes,” she replied, sipping her bubble juice once more. Merlin. How was it possible for anyone to look this adorable?

“Me too. They’re my favorite,” he said, instantly smiling.

Draco was not much of a talker, and when he did talk, it was usually sarcastic or rude. However, everything felt different at the time. They kept talking, and it felt so easy, so nice. It was like flying a broom for the first time, or like dancing in the rain when you’re happy, but there was a fire forming in the pit of his stomach that couldn’t be put out.

“It was a pleasure meeting you, Draco,” Astoria said as she began to leave with her sister Daphne.

Draco nodded and looked at Astoria for a second before taking in a deep breath. He needed to see her again.

“Will you go out with me this Saturday? We could go to Fortescue’s.”

He felt a wave of relief wash over him when she beamed and nodded at him.

“I’ll owl you,” He waved at her with a smile that could not leave his face.