My Time at Wizard School – Part 2: The Place for Magic

When I reflect on my own experience acting in amateur theater, I am grateful not to have done any of it alone. There were my castmates, always available to play off of in a scene, and there were also the unspoken characters of the set and the props. Having the audience believe that the performance was taking place in a world set in another time, or at least in another place, was not just up to the actors. It was made so much easier by the amazing sets and props that the production team designed for us with each show. How could we have done Arsenic and Old Lace without a functioning false-backed window seat, for example? It would have required a lot more imagination. This is also the case with live-action role-playing (LARP)!

Unlike in typical long-form improvisation, props do not have to be mimed from thin air in LARP. In fact, it is easier if they are tactile and real. If a character is going to walk like they’re carrying a staff, have the staff be part of their costume so everyone can see it. Similarly, if you want the characters in a LARP to act and behave like they are in a different setting (such as the magical fantasy setting of Albion School of Sorcery), especially over a prolonged period like a four-day weekend, it would help to make the players behind the characters feel it by finding a real-life place to hold the LARP which itself looks fantastic.

The DeKoven Center in Racine, WI, was home to Albion School of Sorcery, a LARP event developed by Moonrise Games. Photograph by Allen Turner

Enter the DeKoven Center in Racine, Wisconsin. Originally built in the mid-1860s as Racine College, the grounds include a lot of castle-like architecture. The interior of St. John’s Chapel on campus looks to be pulled straight out of Filius Flitwick’s Charms Class. The buildings are just old enough (though not drafty or uncomfortable) to contain some atmospheric resonance of their own. The many long hallways with hardwood floors, antique furniture, and historic art adorning the walls make the DeKoven Center part “Hogwarts staircases,” part “Beast’s castle library.” And it was here where 23 people slipped into the magical world of Albion earlier this month.

“The LARP kit gets bigger for us each and every year,” says Tiffany Keane Schaefer, the artistic director and founder of Moonrise Games. “But if I could only take one thing with us to go and do a LARP, it would be the lighting.” Tiffany and her staff replaced nearly every lightbulb in Taylor Hall of DeKoven Center, where guests’ quarters, the cafeteria, a small chapel, the library, the conservatory, and other classrooms were located. And boy, did it make things even more magical. When paired with the impressive assortment of table toppers, centerpieces, fake spider webbing, ivy, and classroom materials, it was incredibly easy as a player to believe we really were attending magic school. “The light bulbs were all color-changing light bulbs. On the first night, they were set very cool and then, almost like the ‘heat was turned up’ later in the week, along with the story’s main conflict, by the end of it every room and everyone was bathed in reds,” Tiffany explains, to my concurrence. As for the props and set decorations, they’re easy enough to source if you know where to go, and Tiffany does. “We have three whole bins of ivy now,” Tiffany says, “sourced mostly from Facebook Marketplace. After a wedding, when people don’t need it anymore. And with other props and table pieces, we deconstruct them, and you can find amazing things that way.” Amazing indeed. 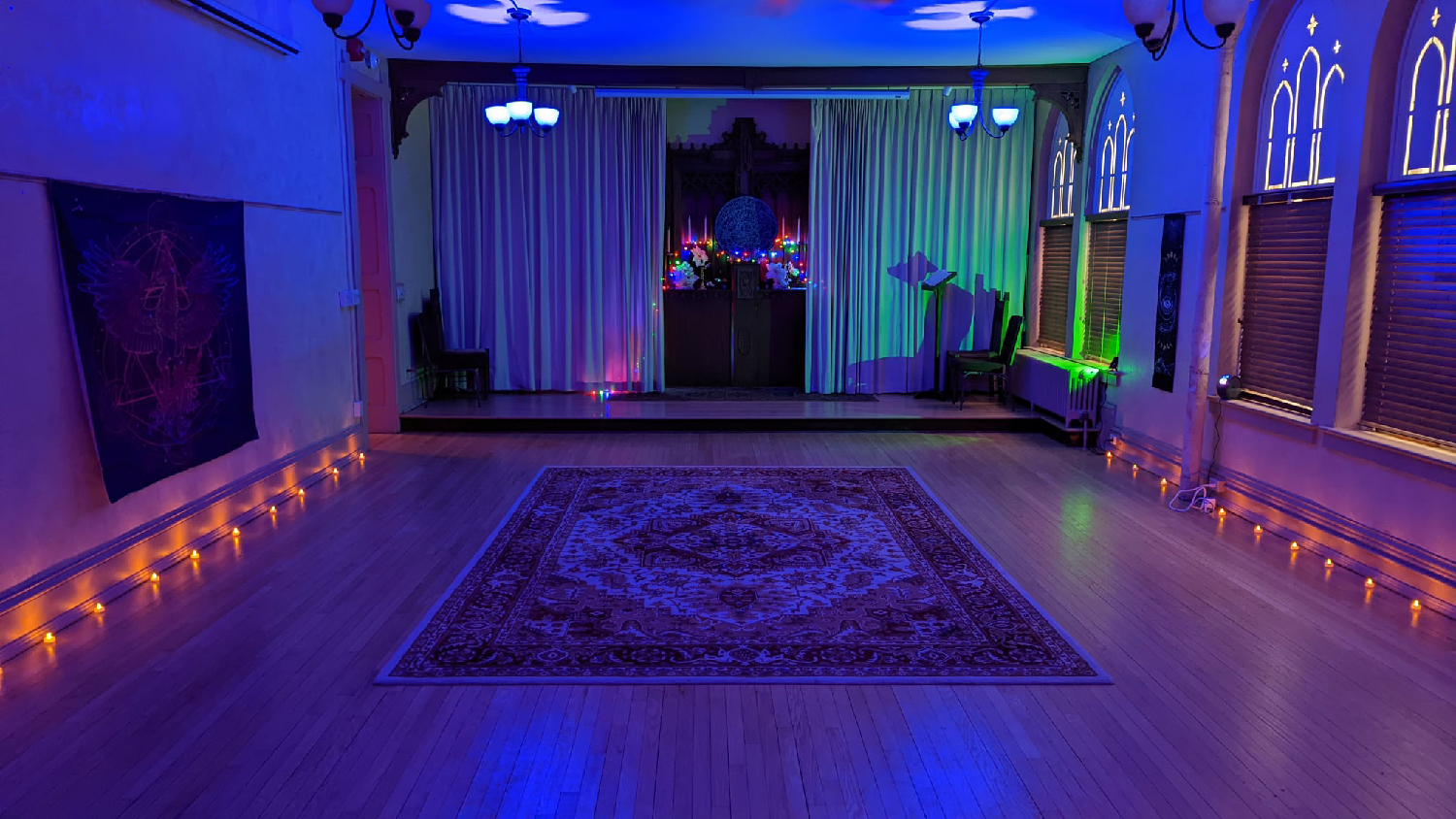 The lighting in headmaster Thelonius Anh’s classroom at Albion School of Sorcery was breathtaking.

In the event that the storyline of the LARP calls for something really specific, Schaefer knows just what to do. This year’s Albion called for a wooden cabinet that would be in the possession of the school’s 300-year-old vampire teacher, Prudence Balladan. Inside the cabinet would be vials of blood (but not really) taken from the students at the start of the game for story purposes. Local Chicago artisan Adam Halliwell rose to the challenge and designed an impressive case that served the story perfectly. The students at Albion snuck into “The Crypt” on the first night, where Prudence stored the vials and uncovered very important secrets about some of the characters’ backstories. It was here that my character’s brother Helios discovered he was not, in fact, a twin to my sister Selene, with heartbreaking results. Another character learned that they had unicorn blood in their veins, something that made them very special but also a target for some in society.

The phylactery was custom-built by Adam Halliwell for use at Albion School of Sorcery this year. (Photo credit: @PropsByAdam)

Nearly all the Albion experience was a seamless feedback loop of characters inhabiting a setting made magical for them, making choices within the narrative that furthered the plot, and that leading to more scenes with even bigger set pieces and events. The week culminated in a Lupercalia celebration (in DeKoven’s gymnasium) put on by House Ignus (one of the four school houses at Albion), and it was during this evening of dancing and revelry that the sinister plot befalling the students came fully to light. The mischief god, the Black Fox, met with students the night prior, utilizing the under-trafficked fourth floor of Taylor Hall in near pitch-blackness to strike a bargain with the students for their protection. Every setting had a unique feel, every scene had a purpose, and everything in between was essential character development as we, the players, were all getting to know and forge alliances with each other. And then there were the classes.

The professors of Albion, to be featured in the next article, each taught classes in magical subjects, which proved to be engaging and alluring. Many classes produced materials that we took with us. We made a protective amulet in Defense Against the Dark Arts class, cast astonishingly foreboding runes in Runes, assembled potions, and elixirs, built fantasy plants in Herbology… a whole manner of creative exploits beyond the acting and storytelling we were doing. Overall, I cannot imagine a better place or setting than the one in which Albion was held.