The Hogwarts Hunt has begun! You have seven days to find seven ingredients for the mystery potion that will create an epic decoration for the Hogwarts Pride Parade. You awake early today and look at the parchment before sunrise. A name appears: Hagrid. You dress quickly and start across the lawn to his hut just as the sun’s first rays are beginning to peek over the mountains in the distance. You slow down as you near the edge of the forest, on the lookout for any less-than-friendly creatures Hagrid might have outside his home. It’s a bit early to defend yourself against Fire-Crabs or Blast-Ended Skrewts, but you put your hand around the handle of your wand just in case. The coast looks clear aside from some roosters.

Apparently, you’re not the only one up early today. When you knock on Hagrid’s door, he opens it to reveal that he has company: Harry Potter and Ron Weasley are sitting at the table and enjoying breakfast. They invite you to join them, so you take a seat and accept the toast and marmalade Hagrid offers. Fang puts his head on your lap, eager for you to drop a crumb. You notice Ron is wearing a Chudley Cannons pin.

“How are they doing this season?” you ask, nodding toward the pin.

“Don’t ask,” Ron mumbles as he aggressively slathers marmalade on his toast.

“Wondered when I migh’ be seein’ yeh,” Hagrid says. “Bin holdin’ on ter this since las’ year. Lemme just find it…” He rummages through some cupboards as you chew your toast. Finally, after going through what seems to be the entirety of his house, he pulls out a crumpled piece of parchment.

“There yeh go. Work tha’ out an’ I’ll give you wha’ you need. Should have plenty righ’ out back.”

The parchment has a series of images on it: 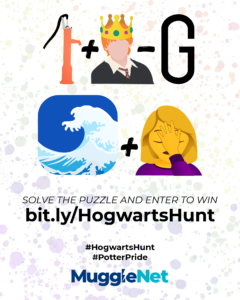 What ingredient do you need? Enter the answer on the Hogwarts Hunt page, and donate to your House’s fundraiser while you’re at it. Keep an eye out for the rest of the clues and ingredients throughout the week.