“This Is the Condition I Like to See My Books In”: First-Edition and Signed “Harry Potter” Books on “Antiques Roadshow”

There is a lot of memorabilia that can be collected by Harry Potter fans these days, but some of perhaps the most valuable and wanted pieces are the first-edition books and Potter books that J.K. Rowling herself has signed.

The paperback was given one year in my stocking for Christmas, and [I] passed it ’round to my siblings, which is why it’s in the condition that you can see here. 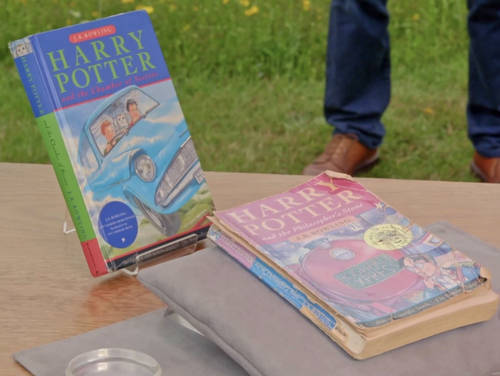 The message written by Rowling in Helen’s version of Philosopher’s Stone reads, “To Helen – This is the condition I like to see my books in! (Read).” 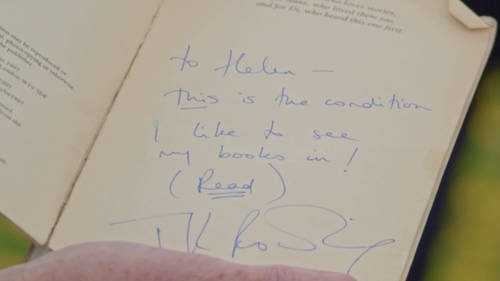 In other Harry Potter book news, a first edition of Harry Potter and the Philosopher’s Stone is going up for a private auction at Christie’s in London, England. It is among 200 books that are being sold as part of its exhibition The Art of Literature: Loan and Selling, which is open to the public between June 7 and 15. 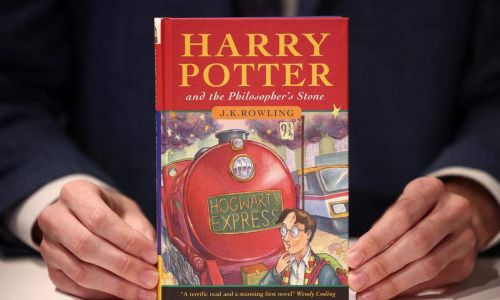 The book, which is one of the original 500 hardback copies that were printed in the initial run in 1997, is signed by J.K. Rowling. The book does, however, contain some errors, which was discussed by Mark Wiltshire, a specialist in printed books and co-curator of the exhibition.

There were a few things that they seemed to get wrong in the book production. On the back cover, for instance, [‘]Philosophers[‘], which of course is quite a key word… is misspelt ‘philosphers’, that ‘o’, that second ‘o’, is missing. Also, on page 53, in the list of items [that] pupils are asked to take to Hogwarts with them, ‘one wand’ is repeated twice.

Perhaps it’s time you dug into your Potter book collection to discover whether you have a special book that’s worth something. Be sure to check out the advice given by Jim Spencer of Hansons Auctioneers on what exactly to look for in your Potter book to know whether or not it’s the real deal!