Harry and his cousin had a complex relationship, particularly in the books. They had a rough start when they were children; much of this was due to Dudley’s upbringing. However, as they grew up, their relationship improved. In honor of Cousins Day, we thought we’d look at Harry and Dudley’s best moments.

He had trodden on a cup of cold tea that had been sitting on the floor outside his bedroom door. (DH 13)

Again, Dudley appeared to grapple with thoughts too unwieldy for expression before mumbling, “You saved my life.”
“Not really,” said Harry. “It was your soul the dementor would have taken….”
He looked curiously at his cousin. They had had virtually no contact during this summer or last, as Harry had come back to Privet Drive so briefly and kept to his room so much. It now dawned on Harry, however, that the cup of cold tea on which he had trodden that morning might not have been a booby trap at all. (DH 40)

Although not the best way of offering his cousin a drink, Dudley put a lot of thought behind this well-meaning gesture, which was a good first step in improving their relationship.

It seemed that Dudley was struggling with concepts too difficult to put into words. After several moments of apparently painful internal struggle he said, “But where’s he [Harry] going to go?” (DH 39)

It took a while for Dudley to figure out what was going on, but when he realized that Harry would be leaving the Dursleys to go elsewhere, he demonstrated a real interest in Harry’s journey — something his adult parents didn’t do.

Dudley gently released himself from his mother’s clutches and walked toward Harry, who had to repress an urge to threaten him with magic. Then Dudley held out his large, pink hand.
“Blimey, Dudley,” said Harry over Aunt Petunia’s renewed sobs, “did the dementors blow a different personality into you?”
“Dunno,” muttered Dudley. “See you, Harry.”
“Yeah…” said Harry, taking Dudley’s hand and shaking it. “Maybe. Take care, Big D.” (DH 42)

Given the contentious behavior they’d had for the majority of their lives until this point, this proper goodbye was a rather gigantic moment in their relationship. It really showed how far Dudley had come from his terrible bullying. 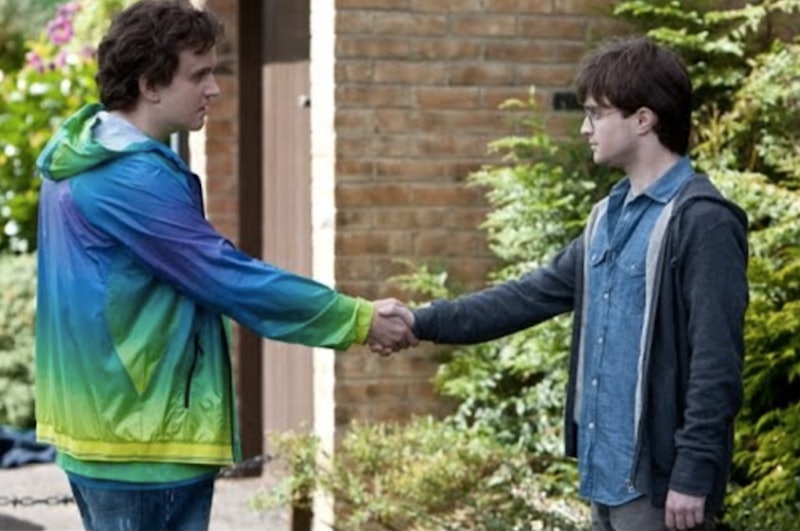 However, I know that after Dudley’s brave attempt at reconciliation at the start of Deathly Hallows, the two cousins would have remained on ‘Christmas card’ terms for the rest of their lives, and that Harry would have taken his family to visit Dudley’s when they were in the neighbourhood (occasions dreaded by James, Albus and Lily). (J.K. Rowling’s website)

Considering their rough relationship when they were growing up and living together, it was very unlikely that they would become close friends when they were adults. However, the fact that Harry and Dudley kept in touch as adults and their children would meet occasionally demonstrates the strides in their relationship.

This [blanket] . . . is the last thing I had from my mum. The only thing. I was given to the Dursleys wrapped in it. I thought it had gone forever and then, when your great-aunt Petunia died, hidden amongst her possessions, surprisingly, Dudley found this and he kindly sent it on to me. (CC 39)

The latest reference Harry makes about Dudley is this one in Harry Potter and the Cursed Child, and it’s a positive one. Dudley’s thoughtfulness toward Harry with this great possession shows how much he has grown.

What do you think of their relationship? Are there any other moments you would include? Let us know in the comments!