Reeman Dansie’s Royal, Fine Art & Antiques auction featured treasures of all kinds on Wednesday, including exciting artifacts from the Harry Potter universe. Bidders gathered in Colchester, England, on June 29 to attempt to purchase the prized pieces, resulting in some extraordinary winning bids.

The first item of note was a first-edition first printing of Harry Potter and the Philosopher’s Stone, found by a school teacher in the Colchester area. Hunting for books to stock her classroom library, the teacher picked the ultra-rare piece off of the shelf of a local charity shop. Her son would later recognize it for the prize it is. 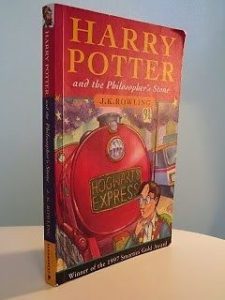 A very limited number of such paperbacks were printed in 1997, making this text the sort of uncommon find most collectors dream of. The value was confirmed by the bidding ending at £6,200 (approximately $7,500). The auctioneer, Daniel Wright, discussed the sale in a comment to the Daily Gazette:

Over 500 million Harry Potter books have been sold to date, making earlier, rarer copies a hot item at auctions. These copies can fetch even higher prices for any interesting singularities. Christie’s auction house in London, for example, offered a first edition for private sale at the beginning of June. The copy in question was one of 500 printed but had the added distinction of the author’s signature. The book also featured several errors, such as misspellings and repetitions, that ironically increased its value. Christie’s invited offers starting at the grand price of £200,000 ($250,000). 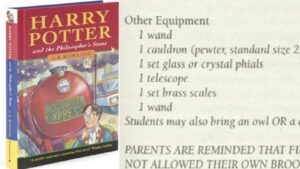 The auction also featured a standout artifact from the Harry Potter movie franchise: an original Gryffindor House cloak. The cloak, a prop from 2005’s Harry Potter and the Goblet of Fire, was given to Make-A-Wish recipient Alba Diaferia during a trip to watch the filming in the Hogwarts trophy room. Reeman Dansie posted a picture of the cloak on Twitter, featuring the smiling seven-year-old on the set of the film.

The lot’s description emphasizes the ultra-rare nature of the piece, stating, “Cloaks from the Harry Potter films are almost never seen at auction.” The cloak sold for £5,000 ($6,000).