Camping Out in New York City for Tickets to See J.K. Rowling at JALC 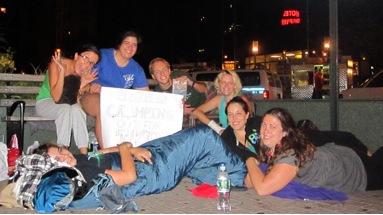 I had never camped out for an event before, because I never found an event I thought was worth camping out for. But J.K. Rowling was worth camping out for. As soon as we found out about the event, my friends and I started planning our camp-out – we prepared for this as if we were storming a castle. Knowing how popular the event was going to be, we anticipated camping all weekend, and possibly the latter part of the week. It was my duty to check Columbus Circle every day to ensure there was no line, and to enquire at the box office as to how this would all happen.

It was clear from the get-go that JLAC was not prepared for this event in the slightest. No one had any idea what would be happening. No one knew when tickets would go on sale online. More importantly, as of Wednesday they did not have a plan for the campers, despite over a hundred people coming in to ask about it.

Thursday, the building security informed me that there would be no camping out, because we were not allowed to be in the building at night, nor were we allowed to “obstruct traffic” outside the building. I could only look at the help desk lady in disbelief – this would clearly result in a mob come Monday morning.

Fortunately, a group of fans called the NYC Potterheads used some ingenuity to set up camp anyway. They camped out on a little island in the middle of Broadway, where it intersects with 60th street. We were next to a Starbucks and in plain view of the building entrance. My friend Megan knew these Potterheads from a previous camp-out, and alerted our group of friends, who arrived Friday. So it was the ten of us on Island 9¾: the NYC Potterheads (Brianna, Jennifer, Natasha, Caisi, and Kristen) and The Group That Shall Not Be Named (me, Megan, Zoila, Maddie, and Mahalah).

The reason no one else joined our line was because security was adamantly denying our existence. When fans came in asking, they were told that there was no line. I felt really bad for all the fans getting turned away because of this, but at least our island had plenty of room.

The first day of camping – Friday – went as smoothly as we could hope. The two groups got to know each other, and people stayed there in shifts so we could eat and relax briefly if we wanted to. We had a very late night of it, playing Uno on the ground (where we were joined for an hour by two gentlemen in tuxes on the way home from a wedding) and Charades. Those of us who brought sleeping bags curled up in them, the rest huddled in blankets on the benches (which stop being comfortable after a few hours). We befriended a security guard, who so appreciated our dedication that he told us everything he knew (which wasn’t much), and promised to help us out in any way he could by ensuring we were first in line to get tickets. He also explained to us just how little all the parties involved were communicating with each other – I suppose this qualifies foreshadowing. We stayed up so late talking with him, we only got two or three hours of sleep. 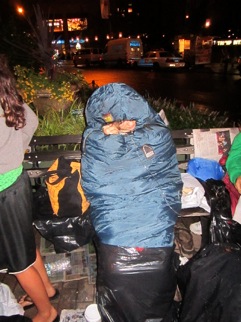 Saturday, things began to get exciting. It rained early on, so we all made a dash for Whole Foods. The upside of having a line of only ten people was that the line could relocate for an hour if it rained. Then a sweltering sun came out, as we sat perspiring on our little island. All day, various members of TGTSNBN came to visit us, providing us with food and company. In the evening, there was a tornado, so we all ran to the building entrance for shelter. At that time, there was a very posh wedding going on. One of my visiting friends, Chris, was dressed so smartly that the arrivals thought he was part of the wedding. When one lady showed up and asked him where the wedding was, he showed her the way. As she went inside, she mistook one of my friends for a servant, and handed her the umbrella she’d been carrying. The umbrella was promptly donated “to our cause,” which I was very grateful for.

We’d just settled back on the island, when it began drizzling. And it alternated between drizzle and rain for the rest of the evening, and well into the night… and we were not allowed to stay next to the building. We were so cold and wet, Megan bought a box of garbage bags, and after wrapping everything in them, we wrapped ourselves in them. We looked like a bunch of homeless people, huddling in garbage bags and blankets, reading under my new umbrella. When we’d get someone staring at us, we’d tell them, “We’re not homeless!” Situations like these are much better with a sense of humor.

We also got two new recruits – a pair of girls from Staten Island named Mary and Lauren. But we were too miserable to do anything fun. That was our early night, so I got almost seven hours of sleep. The benches were so disgusting, Megan and I used an air mattress. I don’t know if that helped with our homeless look.

Sunday dawned full of promise and sunlight. We played Cards Against Humanity as we ate bagels, then took Starbucks shifts to charge our phones for the next day and registered for the JALC site (we would all be trying online as well, just in case). My shift was interrupted by a reporter from Good Morning America, who wanted to interview us. Even though we all looked disgusting and half-crazed after a weekend spent on the island, I and three other girls agreed to do it. The most thought-provoking question was what we would say to Jo once we met her. The one statement that we all really liked and agreed on was, “You didn’t change our lives, you shaped them.”

The security in the building finally decided to acknowledge us as the official line. People slowly began to trickle in throughout the day. Two guys – Chris and Peter – joined us around noon, and six or seven other people joined us throughout the evening. We had a great time, playing various games and chatting as we waited for nighttime to fall, when they would officially line us up outside the building.

Around nine o’clock, we started changing into pajamas and getting stuff ready. Suddenly, my visiting friend Jenn yelled around 9:25, “Tickets are on sale online!”

The following scene is a blur in my memory, but it must have looked like a mini-apocalypse was happening on the island. Everyone went into a complete and utter panic, running around like chickens with heads cut off, and yelling at the top of their lungs. Everyone was trying to access it on their phone, yelling to each other to enquire about progress. Some people (like myself) didn’t have a data connection, and had to run across the street to Starbucks’s WiFi. At the same time, all our friends began calling and texting us about the tickets to ensure we got them… which, though appreciated, was not conducive to buying tickets on our phones.

Finally, I went inside Starbucks to try to buy tickets, disregarding the bedlam still occurring on the island. Peter had brought his laptop, so he brought that to Starbucks and bought his tickets. My order finally went through, and I proceeded to continue buying tickets for my friends who couldn’t get them. Peter also succeeded, and as I guarded the laptop, he went and called others over to use the computer. Everyone was completely frantic – I didn’t even notice the $8 surcharges until the third pair I bought.

Finally, after thirty or forty minutes, everyone had bought as many tickets as we needed. We proceeded to inform Hypable, TGTSNBN, and everyone else we knew. Then everything got a bit hysterical. I (and many others) was completely incoherent, adrenaline pumping through me. After a bit, it sank in that I was actually going to go meet J.K. Rowling. I just burst into tears, and another good half-hour was spent hugging each other and sniffling and exclaiming in wonder, “We’re meeting J.K. Rowling!”

The online tickets completely sold out in an hour and fourteen minutes. And, we reflected, while this was really unfair for some fans, at least the link had been shared among HP fans and the scalpers didn’t have a chance to get all the tickets. Island 9¾ exchanged contact info, took a group picture, and many of them left. But some of us stayed behind to see what would happen next.

At midnight, they set up the barricades as planned. When we enquired about this, the security guards said that no tickets had been sold, they would go on sale at 10am as planned, and that was all they knew. Half of us chalked this up to the guards’ incomplete knowledge – after, we had official bought the tickets, gotten official confirmation emails, had done everything legitimately. After three days of camping out, I headed home. Zoila and the NYC Potterheads stayed behind, because they wanted to try the box office just in case.

I woke up to find my phone a hotbed of activity. Tickets had gone on sale at 10am as if nothing happened. Now, no one knew what was going on. It was evident more tickets had been sold than should have been. Some seats were double-booked. I tried calling the confirmation number from the email, and got no response. The entire day, rumors flew around and incited panic, about whether tickets were legitimate or not.

At 5:15pm Monday, some newspaper reported that the online tickets were not legitimate. The heartbreak I felt upon reading this cannot be described. But prevailing even over the fear and anger was an overriding sense of confusion. There had been no official statement issued, twenty-four hours after the glitch first appeared. All evening, I breathlessly kept refreshing Hypable in the hope of news,a nd texting my new friends about the latest rumors. 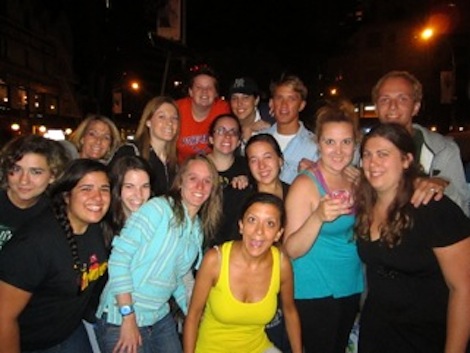 FINALLY, at 10pm, JALC issued a statement saying they had messed up the ticketing, and were looking into ways to honor all the tickets sold. There was some relief, because at least our tickets were acknowledged. Still, this is not okay. The entire situation, from start to finish, is an unspeakable disgrace. I know JALC will be hearing from me about this, and I will never ever go to one of their events again. The whole affair makes Pottermore look like a well-thought-out paragon of organization.

Still hopefully this will all work out, and I will be able to report on the actual event for you, not just the camping.

Ever wondered how Felix Felicis works? Or what Dumbledore was scheming throughout the series? Pull up a chair in the Three Broomsticks, grab a butterbeer, and see what hpboy13 has to say on these complex (and often contentious) topics!
Want more posts like this one? MuggleNet is 99% volunteer-run, and we need your help. With your monthly pledge of $1, you can interact with creators, suggest ideas for future posts, and enter exclusive swag giveaways!
Support us on Patreon