Event Report: Secrets Will Be Revealed at the WB Studio Tour 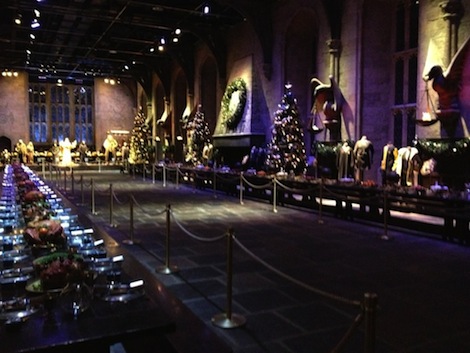 Arriving at the WB Studio Tour this Christmas is like walking into a winter wonderland, with beautiful giant Christmas trees welcoming you as soon as you step through the door. The amazing tree in the entrance hall is so huge it can only have been put there by Hagrid (Though it was actually installed and decorated by dedicated staff in the small hours of the morning.)

We were lucky enough to be invited to the tour to see the new winter decorations on the day they were celebrating the one-millionth guest to the site. The family of four, appropriately enough from the town of Dudley, were greeted by Mark Williams who had just been around the tour to celebrate his daughter’s birthday. He presented them with a Nimbus 2000 and a goody bag of merchandise, making their family day out that little bit more unexpectedly magical. 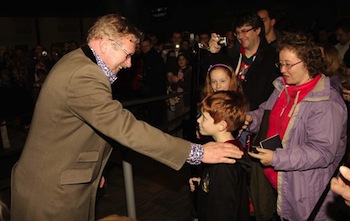 The tour itself has been tweaked and changed since we last visited close to the opening in April. The Christmas decorations will be there all season, so if you have a chance to visit before February do go and see all of the hard work that the staff has put in! There are other small changes that have been made on the basis of visitor comments, the queues for a Broomstick photo are now much shorter for instance and the bridge to Hogwarts is now open so that visitors can walk across. Even without these changes, there is always so much detail that taking the tour for the second time was no less interesting and revealing than the first. 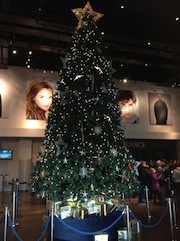 The main attraction today, however, was the glorious Christmas fittings that have been added to four key sets on the tour. The set designers from the movies, Stephanie McMillan and Rosie Goodwin, were involved in designing and overseeing the decorations, as well as John Richardson, the head of special effects. 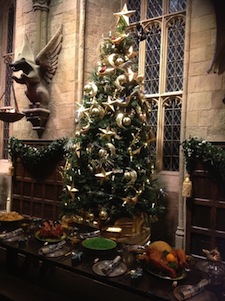 On entering the Great Hall you are now greeted with a magnificent Christmas feast, with eight giant trees adorned with golden stars, moons, and birds, and the occasional witch that you can see in the movies flying around the top of the tree. The fireplace holds a large wreath surrounding the Hogwarts crest, and the tables are decked with the most delicious array of Christmas goods! In the movie, some of these were real dishes, but for obvious reasons, these have been replaced with resin platters that still look good enough to eat. Take a look at both tables for the full array of marvels, with the left covered in roasts and the right with desserts! 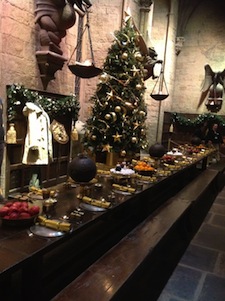 The gigantic Christmas puddings were used in the films and contained gas canisters that allowed the puddings to flame non-stop throughout filming. My personal favorites were the Christmas cakes with adorable snowmen in school uniforms on top. Each section still holds the uniforms of a house, and the tables have been laid with house crackers to add to the appeal. 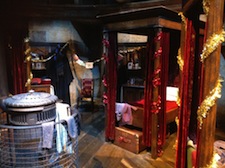 As you go through the tour you find the Gryffindor House has also been decorated for the season. We spoke to the wonderful staff who explained that the decorations in the house are designed to make it look like the students have decorated it themselves, with handmade paper garlands and tinsel everywhere. The tree beside the fireplace is covered in red and gold skulls, which seem like a strange choice for a holiday decoration, but I really want some for my tree! The handmade cards scattered around the rooms are so detailed that they even include messages such as ‘To Harry, Merry Christmas from Hagrid and Fang’ though you can’t see the insides from the barriers. A sneaky Gryffindor student has even put a bunch of mistletoe atop the archway to the dormitories, so be aware of where you’re saying goodnight as you head up to bed! These decorations are a mixture of those seen in the first and the fourth films and definitely look like a warm and welcoming Christmas in Gryffindor tower. 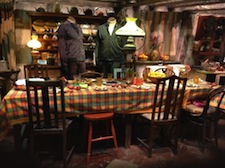 Further along and we find that the Burrow has also had a holiday makeover. The curtains are closed to block out the winter weather and the table is set to a point between the main course and dessert, perhaps Harry and the Weasleys have stepped out for a game of Quidditch to work off the impressive meal. Ginny, an appropriately named staff member, told us more about the set, explaining that the half-eaten turkey on the side table was originally an actual turkey that the cast was told to eat before a resin cast was taken of the remnants, leaving an incredibly lifelike and hunger-inducing dish on show. The crackers have been pulled and the nuts cracked, but the cake has yet to be eaten so it feels like you could sit down at the table yourself and join in the Weasleys’ celebrations.

When walking around the building, make sure you do stop to ask the staff about the sets! The audio tour with Tom Felton is brilliant but asking the interactors adds a new dimension of detail to the already packed experience. There are so many anecdotes and tidbits they can supply about individual places and props, it helps to bring the sets to life with real personality. 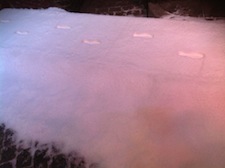 The final addition to the tour is in Diagon Alley, where the SFX department has set out Harry’s footprints in the snow from Hogsmede in Prisoner of Azkaban. Hidden under the cloak, all we see are Harry’s footprints appearing as he walks and these are actually animatronic! Each footprint descends as you watch, one by one as if Harry were walking past.

Overall, the Christmas tour is even more magical than usual and well worth a visit. Thank you to WB and the staff members who made our day so brilliant and thank you to the dedicated staff members who stayed up through the night after closing to make the special holiday makeover possible. It’s brilliant to see Harry’s world at Christmas and I’m definitely ready for the holidays now. 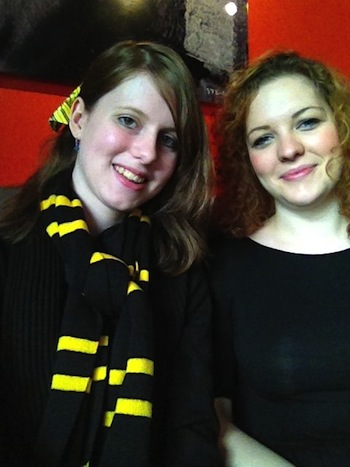