My first thoughts on receiving the Harry Potter Wizard’s Collection were that this box set is just as magical as the name would suggest. Complete with 36 DVDs, this set is any Harry Potter fan’s dream, packed full of extras, artworks, and memorabilia.

Made up of the eight ultimate editions of the Potter films, the collection sees the movies packaged in a brand new way. The series started as books and has returned there with each movie receiving its own beautifully designed board book to host its DVDs. The set, designed by MinaLima – the graphic designers of the Potter films, is a veritable chest of delights, reminiscent of Professor Lupin’s traveling chest from Prisoner of Azkaban.

On lifting the lid, the artwork is stunning. Adorned with the symbols of the Hogwarts houses, patterns which would feel at home on the walls of the Gryffindor common room, and stars and Snitches that make the whole box magical. The sides of the box pull away to reveal hidden drawers and magnetic boxes, all of which hold wonders that I’ll talk about later.

As a fan who had not previously bought the ultimate editions, this set is perfection, though a Blu-ray player is necessary to watch the special features past Prisoner of Azkaban. For fans with the ultimate editions already, the draw of this set would be the beautiful concept artwork by Stuart Craig, the replica of the Locket Horcrux, as well as the presentation of the box itself. 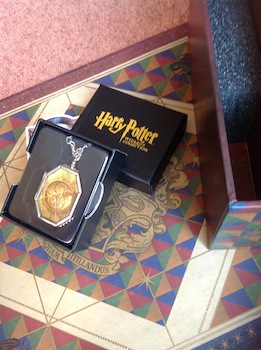 The artwork is really beautiful. The bottom drawer holds a scene concept for each movie: the chessboard, an exterior of Hogwarts, the Whomping Willow, the Durmstrang ship, the Thestrals, the seascape beside the Horcrux cave, Shell Cottage and Dobby’s grave, and Hogwarts on fire. Each piece is beautifully presented on card and reminds me of presentation cells of animated movies. Owning this art is really owning a piece of the Potterworld, and I would happily display any of them simply as beautiful artwork.

Within the top drawer is a book of labels as designed by MinaLima, which adorn the props within the movie. From potion labels to Honeydukes products, luggage labels, and items from Weasleys’ Wizard Wheezes. These labels hide in the scenery of the film, but they are essential in making the movie world real, and now for the first time you can hold them in your hand and see how much work went into creating these magical products.

Beneath the labels is an envelope of Stuart Craig’s own concept sketches, including the view down to Gringotts within Diagon Alley, the first sketch of Hogwarts’s exterior as seen from across the lake, and Hagrid’s hut with Sirius’s motorbike parked outside. Stuart’s work is incredibly detailed and beautifully drawn, and you can see each of these scenes within the movie, showing how much of the world we’ve come to know came directly from Stuart’s imagination.

Within a secret hidden panel at the back of the set, beneath the lid and behind the top set of disks resides the “Harry Potter – Catalogue of Artefacts,” displaying props from the movies arranged by character or scene. These show previously unseen details from key props, including the badger of Hufflepuff’s Cup, the chain of office of the Minister of Magic, and the Chudley Cannons print of Ron’s bedroom. Also in this hidden section is a beautiful blueprint of Hogwarts Castle from the Deathly Hallows movie and a printed cloth map of the Hogwarts area including Hogsmeade, the Quidditch pitch, and the castle itself. 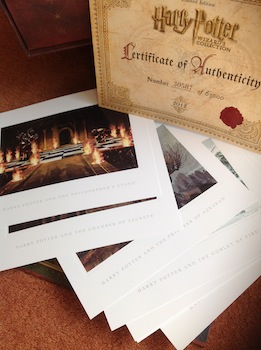 Moving on to discuss the content of the discs, aside from each copy of the movies on DVD, Blu-Ray, and digital download forms, the most exciting sections of the DVDs are the previously unreleased Parts 7 and 8 of the Creating the World of Harry Potter documentary. While we are aware that a few box sets may be missing these discs (we hope they’ll receive replacements soon) most sets appear to be complete, and they really are a must-see.

Part 7 features a conversation between Jo Rowling and Steve Kloves that really was brilliant. The 45-minute segment shows them discussing the entire process of changing each book into a movie, how hard it is to stay true to the books, and how the focus remained on keeping true to their characters, their opinions on the directors, actors, and the movies themselves, and the wonderful relationship that the two writers built up over their ten years of conversation. Personally, this conversation is my favourite interview I have ever seen in regards to the movies. It is the perfect way to end the series and see how much love both writers have for each other’s work.

Part 8 reflects on the actors of the films and how their lives changed due to growing up with Potter. From their earliest interviews to the last day of filming, the documentary shows previously unseen footage from behind the cameras, including the real school within Hogwarts, the friendships and professional attitudes that they all developed, and how within the studios at Leavesden, the young cast was never treated as “famous actors.” Instead, they received as normal a childhood as possible, encouraged to have fun and enjoy their time within the magical world. 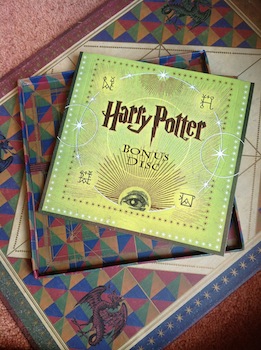 On the bonus disc, the Designing Potter documentary really champions the unsung heroes of Potter that we have really come to appreciate in the years since the movies were made. With the opening on the Studio Tour, fans are able to get up close to the detail of the movies in a new way, and this documentary is the perfect accompaniment to this as we get to put faces to the people who really built the world of Potter. My thanks to Stuart, Jany, MinaLima, and all the set designers and creators. It’s wonderful to see their processes and how they brought the world from our imaginations to life.

This set is the most complete Pottermovie experience; the only way to make it better would be to put on a screening of the set within the walls of Hogwarts itself. It really is a must-have item, and with its status as a limited edition, with only 63,000 being made – each with its own certificate of authentication – I feel very lucky to have been given the chance to review one. To those with the ultimate editions, the cost may be a little high, but the care that has been put into the production of the set rivals the care of the details of the movies, and I for one think it’s worth every penny.