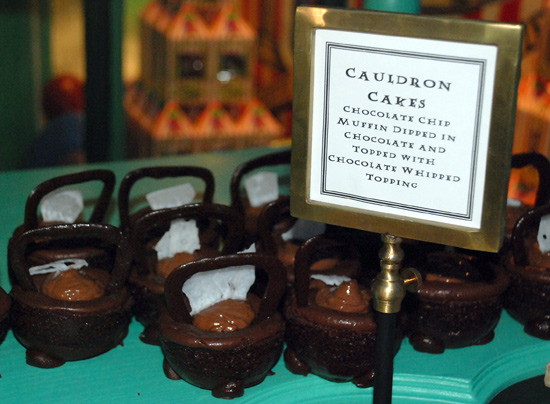 This is the second of three reports to be published stemming from a recent visit to Universal Studios in Orlando, FL where several Harry Potter fansites were invited to partake in some behind-the-scenes special events. The first report contained an interview with the man foremost behind the Wizarding World of Harry Potter theme park and his description of its feature ride, Harry Potter and the Forbidden Journey – as well as a special tour we were given through its queue. Although that report answered long-standing questions about the most anticipated ride in the park, I feel that this report details what will be the Wizarding World’s knockout punch to fans and non-fans everywhere: the food.

Note: Later today it is expected that a full menu of food and drink available in the HP theme park will be released by Universal Studios as per a prior understanding between them and us. Although pictures of the food itself are not at this time available, we expect that such images are forthcoming.

There is really only one way to summarize what is going to be said in this review: try the food. All of it. Then have some more. It’ll do you good.

Our first taste of the Wizarding World’s menu was the storied Butterbeer. It had been reported previously that, in order to create Butterbeer for the park, a long and complicated process was taken, which resulted in J.K. Rowling herself sitting down with five flagons of potential Butterbeer and being asked to decide which recipe was “the one.” So we were really excited when Mr. Florell told us we’d be having some. Sure enough, a moment later we each had a mug of the amber liquid, topped off with white fuzz and even bubbling slightly, in our hands. A few of us raised our glass and opted to toast “Harry Potter, the Boy Who Lived” (I’m proud to say I prompted that one), and then we drank.

It was thick, the fuzz, then rich, then colder and thinner at the bottom. A few more drinks and I was sure that the substance I was drinking was from another world. I don’t know how they did it, but the Butterbeer feels like it changes density as you drink. It’s chilled, too – the Butterbeer will be kept just above 32 degrees when it is served in the park. As for the taste, it is described as a cross between “butterscotch and shortbread” – I think that’s probably accurate. I’ll also say that I’ve become a fan of a personal homemade Butterbeer recipe involving cream soda, rum, and schnapps – but this, a non-alcoholic beverage for park guests of all ages, far closer matches what is likely served in Hogsmeade of literature. What surprised me was that the more I drank, the more I liked it. It is a solid beverage, a solid “brew” if you will, that has a consistent taste and is not too sweet or strange. It holds its flavor the whole way through, and let me just say the cream on top is excellent for giving the drinker a Butterbeer mustache. I’m finding difficulty in describing it more, except to say that it must be tried and will not disappoint.

A frozen “icee” version of the Butterbeer will also be available in the park. After finishing our Butterbeer, we tried it, too. It really is a testament to how solid a drink is when you can make a frozen version of it accentuating the flavor that doesn’t completely ruin it. The frozen Butterbeer was just as good a treat and will definitely benefit on those really hot July days in Florida. I have no doubt that both the Butterbeer and its frozen rendition will have guests piling in from the rest of the Islands of Adventure park to try it. Once they are there, of course, they’ll be stuck, I suspect.

The Butterbeer was only the first item off the menu that we tried. There was much, much more.

Within the next few minutes, we saw all of the dishes that would be served inside the park. Overall impressions were that the meals are balanced – containing salad to offset the meat and vice versa. They’ve taken the food mentioned by J.K. Rowling in her books and broken it down into several plates of yum. For main courses, the park will be serving British-themed food using European recipes: shepherd’s pie, fish and chips, Cornish pasties, and leek soup. Other dishes, such as chicken, ribs, and corn, will be served. The head chef of the Harry Potter park, Mr. Stephen Jayson, also has some specialist equipment to work with. We were told that, in the kitchen of the Three Broomsticks, they have a smoke machine for the meat and a corn smoker for cooking corn fresh (while it’s still in the husk!). 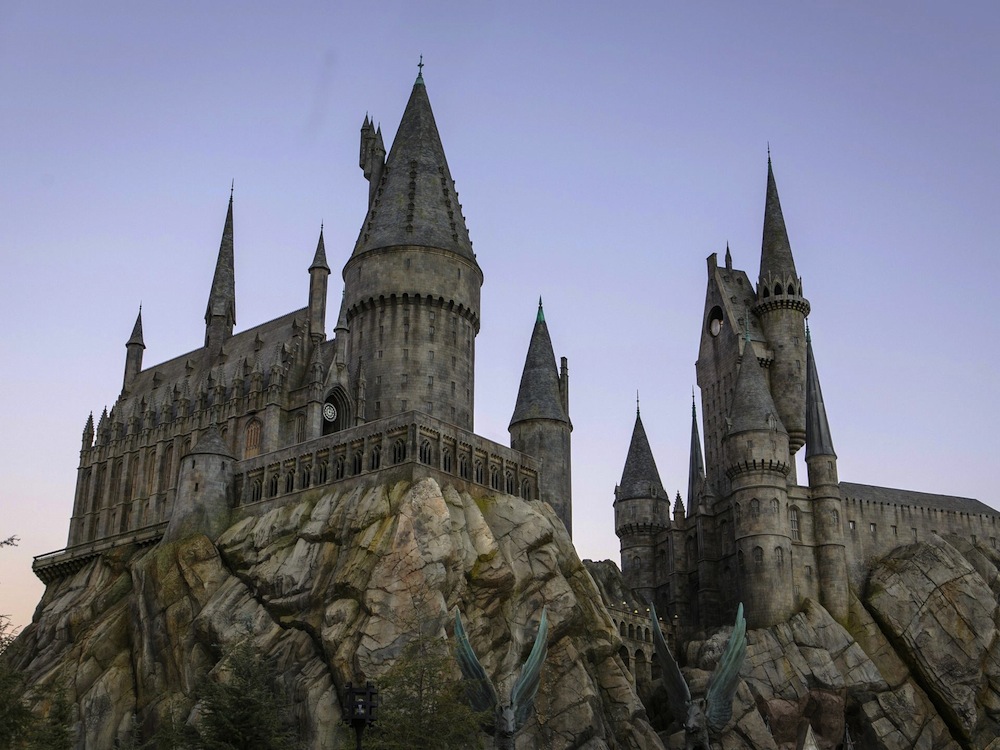 In what is such a good idea that I have separated it by starting a new paragraph, the park will serve a meal called “The Big Feast” – which is a platter designed for four people – consisting of half chickens, ribs, sweet potatoes, and corn on the cob. This “big feast” platter is what the fansite heads were treated to. As well as the salad and fish and chips. Four people will be very thoroughly satisfied with this meal. Even two of our friends who flew to Universal from overseas (one British, one Irish) were impressed at the authenticity of the European-style foods. They were raving about the sweet potatoes!

My first foray into British cuisine was some fish and chips I had at a pub in Stratford-upon-Avon (birthplace of William Shakespeare) in June of 2006. The fish and chips I had there were served alongside the famous local cider, which I was surprised to learn is an ale and not a beverage resembling “apple cider” that I enjoy at my family’s Thanksgiving dinner. The relevance of this story as it pertains to this report comes with my surprise as I began to have the Hogsmeade-style fish-and-chips and was presented with Hogsmeade’s pumpkin juice.

The pumpkin juice, also served cold and quite refreshing, is a unique beverage constructed by the culinary geniuses at the Wizarding World of Harry Potter theme park. I mention apple cider because it is the only thing I can think of to compare it to. It does for pumpkin what apple cider does for apples. It is a sweet, delightful drink that tastes of cinnamon and ginger, pumpkin-accentuated, and my, oh my is it tasty. This is another beverage you just have to try to believe. Harry and his friends at Hogwarts have pumpkin juice during their feast, and so, too, did we at our tasting of the food. The two together made for a truly authentic experience that is sure to be unreal once it can take place inside a finished wizarding world theme park.

Some Harry Potter fans throughout the years have felt that there was a bigger mystery in the Potter books than the secret behind He-Who-Must-Not-Be-Named. They wanted to know how Harry and his friends could eat so much and not suffer from obesity or diabetes. It was with special care on his face that Mr. Florell told us there would be kids portions of all of the dishes offered in the park and that each of them (Fish and chips, chicken with salad, etc…) were under 300 calories. It is so evident, the planning and care that went into this menu, that my ability to describe my encounter with this food may fall short. However, hopefully in reading, you can tell that these meals were prepared with the guests’ delight and health as the number one concern.

There was a quote used in my previous report that stated that “not a meeting was held without all seven ‘Potter’ books in the room, and not a decision was made without them present.” This quote actually belongs to Richard Florell, and he was speaking of the food served in the park. Ric actually had three of his books with him while we were eating, and we saw that they were place-marked with color-coded post-its. I presume that each of those flags was a reference to food or drink in the Harry Potter books, and Ric said that he can track every one and has gotten to know them fairly well. Being the VP of Food and Merchandise, it was likely Ric’s choice of which sweets and goodies to bring to life. From our experience tasting a wide variety of desserts after our stunning meal of salad, ribs, potatoes, corn, and chicken, I have to say he’s done an alarmingly great job.

Strawberry-peanut butter ice cream. Okay. This one presented a particular challenge to the Wizarding World theme park chefs, we were told: “How best to do it, that was a concern. It’s strawberry, and it’s peanut butter, and it’s in the ‘Harry Potter’ books, and Rowling says they eat it. Well, okay then. Let’s try to make it.” The strawberry-peanut butter ice cream is realized in the Potter theme park and is better than you’d think just by reading about it. It far surpasses any ice cream with peanut butter chunks I’ve had from a supermarket (not that that should come as a surprise this far along in my report), and it is a solid example of a one-of-the-kind experience awaiting Potter fans everywhere. In fact, it is such a perfect blend of both strawberry and peanut butter flavors that I really am wondering how they did it. Then I remind myself that they’ve got magic on their side. Hmm.

Cauldron cakes, like chocolate cupcakes only molded like real cauldrons, are an example of the finesse in practice at the Wizarding World’s kitchen. They’re cauldrons with a handle overtop – I don’t know how they bake it. Chocolate syrup and desserts, cookies, all were served on a tray to us. I was, at this point, far too full to try everything (sorry). I knew I would be coming back.

The bottom line is that everything served at the Wizarding World is so beyond impressive that you have to try it to believe it. The chefs have taken so many food items from the books, and they LOOK so appetizing (it is so hard to write this report without photographs of the amazing dishes we saw) that nobody is going to be walking away disappointed. To dispel a rumor once and for all, the Butterbeer in the park is not alcoholic, but they HAVE concocted a special brew for the Hog’s Head pub called “Hog’s Brew,” which is unique to the park. If it’s anything like the care that went into their other food and drink, I am sure it will quickly replace traditional Muggle adult beverages as favorites.

The Butterbeer and pumpkin juice served in the park will not be shipped or sold outside of the park. It will be available in the Wizarding World of Harry Potter theme park only. We asked, and they told us. You will have to travel to Hogwarts (in Orlando, FL) this summer to get it. If I lived near the park, I’d be stopping by Hogsmeade three times a day for breakfast, lunch, and dinner. Their food is going to be that good. One will not tire of it easily.