This Wand Week was a special one indeed. The focus seemed to be on how wands were designed. The Studio Tour ran a contest for fans to design their own wand. The winning wand would then be made a reality. The winning wand was a beautiful creation with leaves on the handle and a colorful phoenix feather wrapped around the entire wand.

As I watched one of the wand designers carve this creation, I started chatting with another one of the staff about how the design for each character’s wand was decided on. He told me that the film directors (starting with Alfonso Cuarón, who decided that each character should have a personalized wand) would meet with the design team and determine what kind of character they were dealing with; for example, the twins are fun-loving, Voldemort’s has a strong connection to death, etc. The design team would then come up with a drawing they thought fit that character.

This design was submitted to J.K. Rowling, who would approve of the wand or send it back for redesigning. This staff member (who was very helpful and insightful) also noted that the trio (Harry, Ron, and Hermione) were all given very organic-looking wands to symbolize their purity. Harry’s looks as if it has just been carved from a tree; in fact, it looks like it is growing from the handle. Ron’s is similar but is cut rougher, with more distinct divots. Hermione’s is the most put together, daintily carved with vines. Each of these wands obviously reflects its owner’s character!

As I watched the crafting of the winning wand, it was clear just how much time and effort went into creating the beautiful detail of every wand for the films. Once again, it shows the detail and care that went into the making of these films. 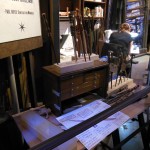 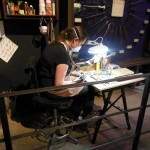 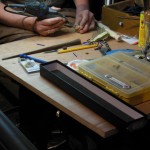 Wand-making during Wand Week 2014, WB Studio Tour
Want more posts like this one? MuggleNet is 99% volunteer-run, and we need your help. With your monthly pledge of $1, you can interact with creators, suggest ideas for future posts, and enter exclusive swag giveaways!
Support us on Patreon