Daniel Radcliffe was at San Diego Comic-Con last week to promote his upcoming film, Horns. A few posters have been released over the last few weeks, and now an updated UK poster and trailer have been released!

And the updated UK teaser poster: 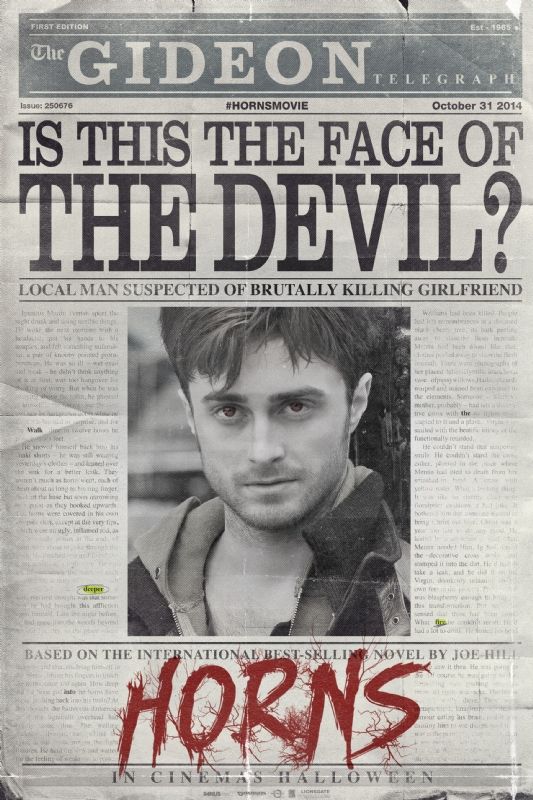 Horns will be released by Lionsgate in the UK on Friday, October 31. Make sure you catch up with MuggleNet’s very own interview with Daniel Radcliffe at SDCC! What did you think of the trailer? Are you looking forward to seeing the film?

Synopsis:From master-of-horror Alexandre Aja (The Hills Have Eyes, Piranha 3D) comes this supernatural, offbeat thriller starring beloved British actor Danielle Radcliffe (Harry Potter, Kill Your Darlings) and the talented Juno Temple (Magic Magic, Sin City: A Dame to Kill For).Ig Perrish (Daniel Radcliffe) is accused for the violent rape and killing of his girlfriend, Merrin Williams (Juno Temple). After a hard night of drinking, Ig awakens, hungover, to find horns growing out of his head; they have the ability to drive people to confess sins and give in to selfish impulses. Ig decides to use this effective tool to discover the circumstances of his girlfriend's death and to seek revenge by finding the true murderer.Daniel and Juno lead an all-star cast with strong support from David Morse (The Green Mile, The Hurt Locker) and Heather Graham (The Hangover I&II, Boogie Nights).