Welcome to chapter 2, where we finally get to meet Harry! Let’s jump right in: 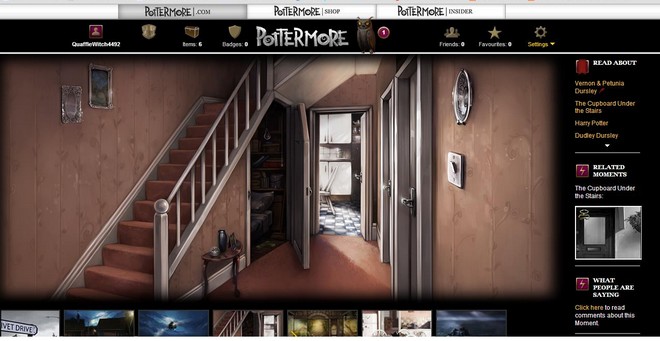 Moment 1: The Cupboard under the Stairs

Again, we see how dreary life with the Dursleys is by the drab color scheme used in this moment. We also get our first collected item: an alarm clock. I’m still not sure what the point of collecting items is. If you could use them in some way, they would be fun; just collecting them gets boring. This is one of my disappointments with the site.

We also get one of the most exciting new bits from JKR: Petunia and Vernon’s back story. This was absolutely fascinating to me. This information paired with what we learn in the books just opens up a whole new level of understanding on Petunia. JKR never ceases to amaze me with the depth of this world!

The one thing that has always confused me about this moment is the numbers in the cupboard, 1531. What is the significance? If anyone has any idea, please let me know, the curiosity drives me crazy.

Moment 2: The Trip to the Zoo

The one thing that really bothers me about this moment is the annoying clicking noise in the background.  There’s also not much to do in this moment. You can’t even get very close to the snake. How awesome would it have been to be close enough to see it wink?

And so, after these rather uneventful moments, we move on to

Chapter 3: “The Letters from No One”

The first thing I noticed is that the quote from the book doesn’t quite match up to the moment illustrated; the quote is from Harry’s first letter when only one arrives. The moment details the later storm of letters.

Once again, we have random items to collect, including salt and pepper shakers (what’s the point of those?) a postcard (from Aunt Marge),  and a hammer and nails (which they claim are useful tools…but again, for what?).

The detail in this moment is nice, but in my opinion, it’s not chaotic enough. Maybe I’m envisioning the film, but I always got the impression that there had to be…well…an explosion of letters to drive Vernon to leave. The softly flapping letters don’t quite meet that expectation.

Moment 2: The Hut on the Rock

More strange things to collect! And again, not much interaction. We can zoom up on the hut, see the boat they took out…but that’s about it. Of course, we don’t get a lot of descriptions in the story about this place. Still, it makes me wonder why they chose this moment to feature. Yes, the hut is important, but it’s not very exciting. I would have loved to see the moment where Harry counts down to his birthday.

But who could be following Harry and the Dursleys to the hut? We’ll find out in

Chapter 4: “The Keeper of the Keys” 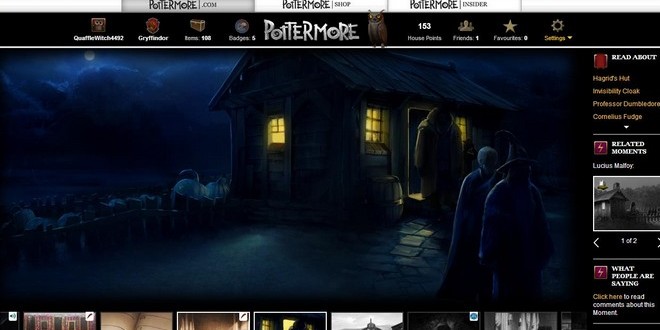 This is a wonderfully illustrated moment. But why does it look like Dudley is still asleep on the couch when Hagrid has already knocked down the door? We also get our first audio snippet! I never listened to the audiobooks (I’m a visual learner, so if I don’t see the words in a book, I probably won’t remember them), so this is a treat. Though I must say, I prefer Steven Fry’s version to Jim Dale’s. Perhaps it’s how they read Hagrid’s voice.

In this moment, we also get new information from JKR on what she terms “ghost plots.” In effect, she’s just reminding us what a genius she is. Or perhaps telling us that the wizarding world really exists? In any case, I’m curious (again) as to why this information was included in this moment. Was some ghost plot supposed to be included here?

Again we find ourselves in the Hut on the Rock, but there are no characters there. I know the artists wanted to allow readers to imagine the characters themselves (hence the fact that they never show faces), but we could have at least gotten Harry and Hagrid’s backs, right? It would have felt more true to the scene. Fun fact: the letters in the American edition and the UK edition have marked differences, and these are reflected on the site, as the letters for each respective country are presented the way they are in the book!

Well, Harry is off to discover the wonders of the wizarding world…and so am I in our next chapter!