Chapter thoughts: I realized while rereading this just how well JKR has laid out the episodes that get our characters to where they need to be at a certain time. From Neville and Malfoy’s confrontation to Harry pulling out the very Chocolate Frog card he needed to Harry’s spectacular Snitch capture to following Snape to the Forest, it all just seems to fall into place. The thing is, this could seem a little far-fetched, but Rowling writes it so that it is completely believable. The pieces to the mystery of this book are starting to fall into place rapidly now that we’ve become accustomed to this world.

For some reason, this view of the Gryffindor Common Room seems much more homelike. It still is a little dark in color, but perhaps the banners on the mantle make it seem more occupied. Once again, the scene is devoid of characters (file under: what has turned into my pet peeve in this experience). However, we get a little look at JKR’s process in creating the character of Flamel, which is lovely. 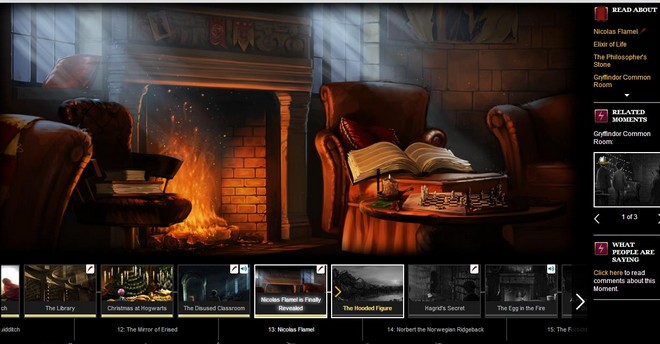 The first time I perused Pottermore, I was a little confused at the viewpoint we were seeing this scene from. Now that I’m rereading while exploring the site, I finally understand: we’re seeing it from Harry’s view on his broom, as that is how he follows Snape. We also get a glimpse of the Whomping Willow, though I have to wonder what a reader who is just starting the series would make of the strangely moving tree in this moment! 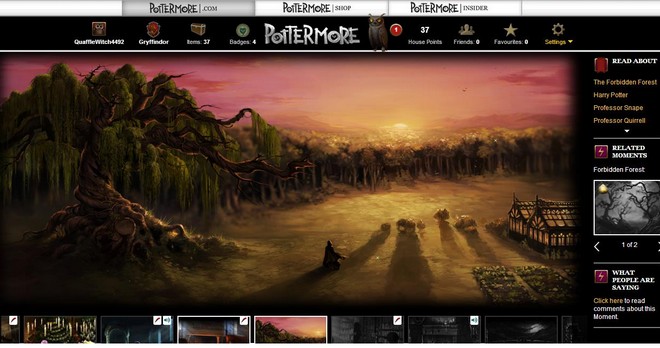 Chapter thoughts: Once again, this chapter sets up Harry and friends for what is coming as we build towards the climax of the story. We are introduced to Norbert(a) and see just how dedicated Hagrid is to his unusual pets. However, Malfoy is out to get Harry as much as ever. One of my all-time favorite funny moments is in this chapter as well: “Malfoy got detention! I could sing!”… “Don’t.”

Finally, our characters are back, and this time in the library. There are a lot of books mentioned in this chapter, and so a lot of books to collect. We also get an excerpt from The Standard Book of Spells, Grade 1. More than anything, this information just helps to fill in some gaps in the world, which is nice. However, I highly doubt Ron would sit that straight in any chair ever. 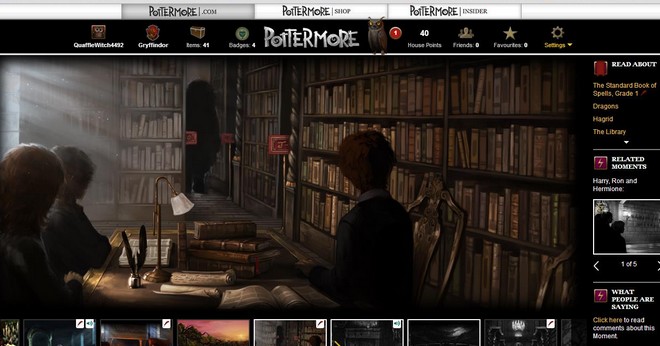 Moment 2: The Egg in the Fire

Once again, we find ourselves in a random corner of a room with no characters in sight. The focal point of this moment, of course, is the egg in the fire. But was it really too much to ask for anything else in this moment? 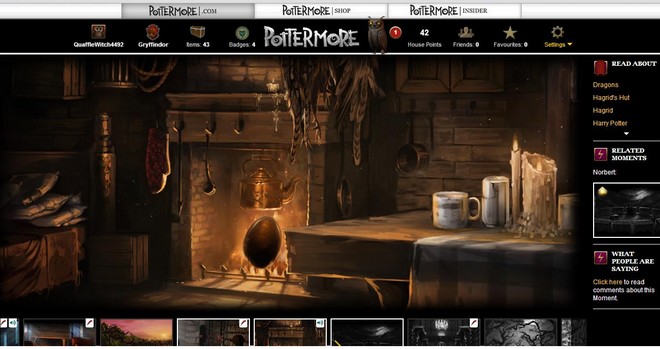 Moment 3: A Plan for Norbert the Baby Dragon

Another moment with not much to do, but some good details. We see the Invisibility Cloak, Harry and Hermione, and Charlie Weasley’s friends, there to pick up Norbert. I especially like the way that you can’t really see the people on broomsticks until you zoom in. Not much to do here, but it is an important moment for what is coming. For some reason though (perhaps the movies?) I always imagined this tower as enclosed. I suppose it would make more sense for a group on broomsticks to land on an open tower. 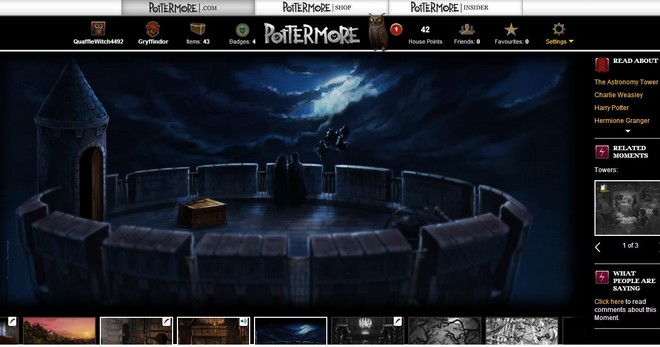 On the subject of Pottermore, congratulations to Ravenclaws, who today can access the final chapters of Goblet of Fire! I, for one, can’t wait to see what’s waiting for the rest of us tomorrow!