The movies are wonderful, but their portrayal of certain Hogwarts traditions or things is certainly either unique or exclusionary to what the books offer. In my opinion some of the things worked very well, and some of them did not.

What they added (among a multitude of other things):

1. The ghost carolers in the Sorcerer’s Stone movie – This was pretty cool because the song “Christmas at Hogwarts” on the movie’s soundtrack features the full version of the song the ghosts sing as students pass them on their way home for the holidays. This also gives the ghosts a little bit more character and presence in their contributions to students’ experience at Hogwarts. It’s a cute, little thing. 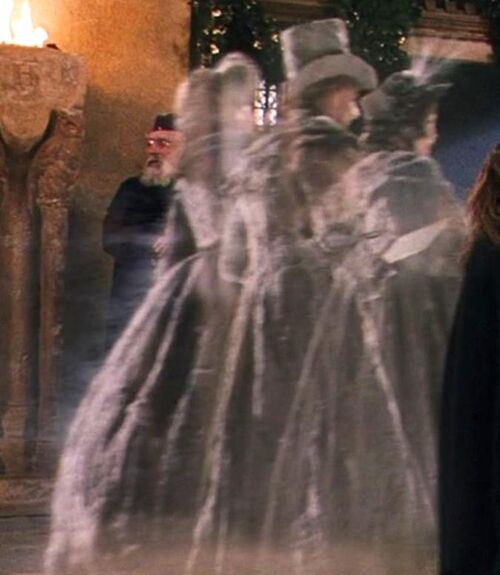 2. Flitwick’s choir of students – Not only do they use lines from Macbeth in the song they sing in the Prisoner of Azkaban movie, but they also add a real flair and idea as to what sort of extracurriculars Hogwarts offers that we don’t get to see in the movies, beyond Quidditch, the failed Dueling Club, and (eventually) Dumbledore’s Army and the Slug Club. Seeing what other students do in their free time at Hogwarts is interesting and rewarding. The song itself also foreshadows that, yes, “something wicked this way comes.”

Source: Back to the Fridge

3. Shrunken heads – These little guys appear in Prisoner of Azkaban, on both the Knight Bus and in the Three Broomsticks. Though they serve as a sort of strange comic relief, they also contribute to the aesthetic Alfonso Cuarón sets up for Prisoner of Azkaban, that of things getting darker and more bizarre.

4. Slughorn’s goldfish Francis, from Lily – The beautiful imagery in the lily petal sinking to the bottom of a fishbowl and transforming into a goldfish truly is wonderful magic in the Half-Blood Prince movie. Not only this, but it also gives us a piece of Lily Evans that we, nor Harry, wouldn’t normally receive. This also softens Slughorn’s character for us, showing his admiration and grief for one of his favorite students.

5. Bursting deaths – Deathly Hallows – Part 2 gives us interesting notions on what exactly happens when people (and creatures) are killed in certain ways. Is there a special Horcrux magic that allows Voldemort and his snake Nagini to simply crack and sort of explode into blackened bits? If this is the case, then why, when Mrs. Weasley kills Bellatrix, does Bellatrix also burst? What spell did Molly use, and what kind of magic is it? While added for cinematic flair, it might have been more impactful to simply see Voldemort and Bellatrix fall limp and for Nagini’s head and body to collapse.

What they forgot (among a multitude of other things):

1. Dobby – The moviemakers cut Dobby from every movie except Chamber of Secrets and Deathly Hallows – Part 1. Part of what made (spoiler) Dobby’s death in Deathly Hallows so significant was that he appeared in the books leading up to that moment; he was a comic relief character, but he was also a character who represented innocence and dreams and hopes and working hard because you want to, not because someone commands you to. The movies robbed Dobby of his character’s growth, especially with him working in the Hogwarts kitchens and interracting with Harry in important ways (gillyweed, the Room of Requirement, tailing Draco Malfoy with Kreacher, etc.). His death was still very sad, but think about how much sadder it would be if he had been featured in the films leading up to Deathly Hallows – Part 1! (Err, better not. I’m getting teary!) 2. The staircases MOVE – In Deathly Hallows – Part 2, Hogwarts gets a makeover, and one aspect of this is that the staircases no longer move of their own accord. Something so iconic and canonical was removed from the last movie. One reason could be that with Snape and the Carrows in charge that the quirky magic leaves or is undone by them. However, we don’t know this for sure, and this contradicts previous movies.

3. The Hogwarts Gobstones Club – Come on. Admit it: you totally wanted to see the Gobstones Club in action (and another interesting extracurricular). 4. Career advice – We never got one major showdown between Professor McGonagall and Dolores Umbridge, in that they argue over Harry’s future in Order of the Phoenix. This is where Harry first expresses his desire in wanting to be an Auror after Mad-Eye Moody’s imposter implanting the idea in his head the previous year. It’s wonderful to see McGonagall fully supportive and ready to take down what Umbridge has to say.

5. Peeves – Oh, Peeves, you almost made it in to the movies. Peeves was the ultimate comic relief and also provided a major quirky feel that Hogwarts innately has. Though movies only have a certain amount of time, it would have been nice to see the infamous poltergeist spit some rhymes and drop water balloons on first years’ heads.

What are some of your favorite moments that were added to the film? What didn’t work for you? We debate it all the time, but it’s always good to look at it from the perspective that the films did what they had to do, and they were great in the way they are. Maybe in a (far-off) future adaptation of Harry Potter, what would you like to see?