Fred and George are arguably the most hilarious and brilliant characters in Harry Potter. Without further ado, here are our top seven Fred and George moments!

7. When, as 13-year-olds, they repeatedly hit Voldemort in the face

The Weasley twins were punished for bewitching several snowballs, so that they followed Quirrell around, bouncing off the back of his turban. 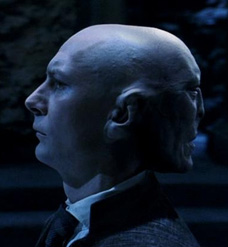 6. When Fred and George thought the idea of Harry being the heir of Slytherin was hilarious

Fred and George, however, found all this very funny. They went out of their way to march ahead of Harry down the corridors, shouting, ‘Make way for the heir of Slytherin, seriously evil wizard coming through …’
Percy was deeply disapproving of this behavior.
‘It is not a laughing matter,’ he said coldly.
‘Oh, get out of the way, Percy,’ said Fred, ‘Harry’s in a hurry.’
‘Yeah, he’s nipping off to the Chamber of Secrets for a cup of tea with his fanged servant,’ said George, chortling.

5. When they invented a portable swamp during their war on Umbridge, forcing Filch to punt students across it

‘So!’ said Umbridge triumphantly. Harry realized she was standing just a few stairs in front of him, once more looking down upon her prey. ‘So-you think it amusing to turn a school corridor into a swamp, do you?’

‘Pretty amusing, yeah,’ said Fred, looking up at her without the slightest sign of fear. 4. When they gave Dudley Dursley his comeuppance

A bag of sweets had spilled out of Fred’s pocket and the contents were now rolling in every direction – big, fat toffees in brightly colored wrappers.

Harry wheeled around. Dudley was no longer standing beside his parents. He was kneeling beside the coffee table, and he was gagging and sputtering on a foot long, purple, slimy thing that was protruding from his mouth. One bewildered second later, Harry realized that the foot-long thing was Dudley’s tongue – and that a brightly colored toffee wrapper lay on the floor beside him. Check out our recipe for Ton-Tongue Toffees here!

3. When they relentlessly teased Percy

‘Oh, are you a prefect, Percy?’ said one of the twins, with an air of great surprise. ‘You should have said something, we had no idea.’
‘Hang on, I think I remember him saying something about it,’ said the other twin. ‘Once–’
‘Or twice–’
‘A minute–’
‘All summer–’
‘Oh, shut up,’ said Percy the prefect.

Percy, who hadn’t noticed that Fred had bewitched his prefect badge so that it now read ‘Pinhead,’ kept asking them all what they were sniggering at.

The Ministry’s providing a couple of cars,” said Mr. Weasley. Everyone looked up at him.
“Why?” said Percy, curiously.
“It’s because of you, Perce,” said George seriously. “And there’ll be little flags on the hoods, with HB on them –”
“– For Humongous Bighead,” said Fred.
Everyone except Percy and Mrs. Weasley snorted into their pudding. 2. But they loved Percy anyway

‘P for prefect! Get it on, Percy, come on, we’re all wearing ours, even Harry got one.’
‘I – don’t – want –’ said Percy thickly, as the twins forced the sweater over his head, knocking his glasses askew.
‘And you’re not sitting with the prefects today either,’ said George.
‘Christmas is a time for family.’
They frog-marched Percy from the room, his arms pinned to his sides by his sweater.

1. And forgave Percy after he was a git

‘I was a fool!’ Percy roared, so loudly that Lupin nearly dropped his photograph. ‘I was an idiot, I was a pompous prat, I was a – a -‘
‘Ministry-loving, family-disowning, power-hungry moron,’ said Fred.
Percy swallowed.
‘Yes, I was!’
‘Well, you can’t say fairer than that,’ said Fred, holding out his hand to Percy. What are your favorite Fred and George moments? Tell us in the comments!