My Marriage with Harry Potter… and Getting Pancakes Published

It’s not what you think. My wife’s name isn’t Harry Potter. Her name is Mrs. Funk. But Harry was there when we fell in love. And Ron was there when I proposed. And Hermione was at our wedding.

Let me back up. I started reading Harry Potter in 2000 when Harry Potter and the Goblet of Fire came out. When I started dating the future Mrs. Funk in 2002, she hadn’t yet read Harry Potter, so we read them out loud to each other. I remember one particularly late night when we stayed up reading the last 120 pages of Harry Potter and the Prisoner of Azkaban until sunrise (because once you hit “Professor Trelawny’s Prediction,” there is absolutely no good stopping point).

In the wee hours of the morning on June 4, 2004, as the credits rolled through the Marauder’s Map ending the midnight showing of Prisoner of Azkaban, I got down on one knee and proposed.

This was our wedding cake: 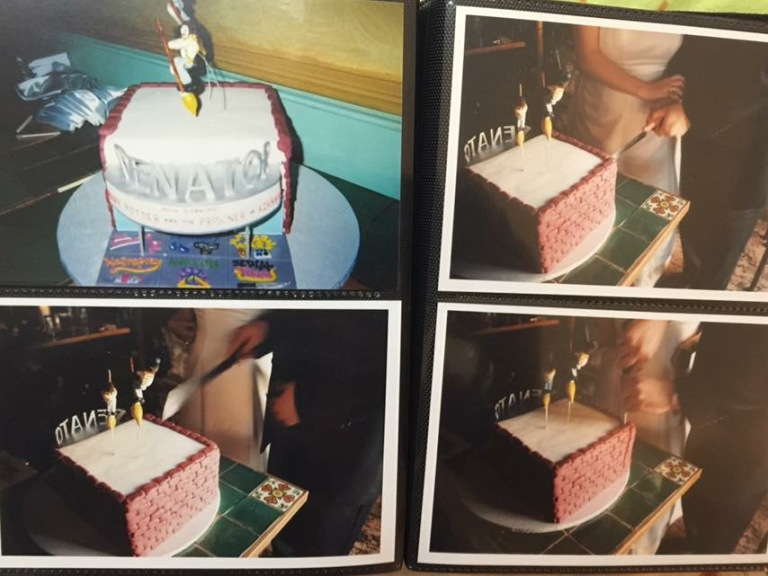 The next few years were a flurry of babies, Harry Potter books, new homes, and Harry Potter movies, filled with hundreds of driving hours listening to MuggleCasts and Jim Dale.

Suddenly, I found myself traveling back ten years without a Time-Turner. I was, once again, reading Harry Potter and the Sorcerer’s Stone out loud. But this time, it was to my children. They’re the ones dressing up at Halloween as Harry, Ron, and Hermione (for some reason, I’ve been assigned the role of You-Know-Who).

And then I started writing books for children. If you thought J.K. Rowling and her 12 rejections were a lot, let me tell you – that’s nothing. On March 18, 2013, I got 12 rejections in a day. Kate DiCamillo received 493 rejections before selling her first manuscript. Literary agents and editors were more intimidating than Dementors.

Not that I thought getting published would be easy, especially since I don’t have a degree in literature (or classics like Ms. Rowling). I took a few evening courses in writing books for children. I joined the Society of Children’s Book Writers and Illustrators (SCBWI – yes, the worst acronym ever) and joined a few critique groups. I honed my craft and learned a bit about the business side of the kidlit industry. I finally got an agent. And I sold a picture book manuscript.

And on September 1, 2015, my debut picture book, Lady Pancake & Sir French Toast, hit shelves across the US and Canada.

So if you’ve ever had thought about writing books for kids, I highly suggest diving in and trying. I’ve even written a few tips I’ve learned over the years. If you’re a fan of reading and Harry Potter, you’re off to a pretty excellent start. You don’t need a Patronus to get an agent or get your book through the slush pile.

Although if I ever needed to conjure a Patronus, I’d just need to think about the time I got that email saying, “We’d love to publish your book.”

Or maybe I’d think about the time I first read Sorcerer’s Stone to the kids.

Or one of those midnights in the theater or Harvard Square.

Or better yet, those wee hours of the morning, when we just couldn’t stop reading.

Now’s your chance to win a copy of Josh’s debut picture book, Sir Pancake & Lady French Toast! It’s easy to enter – all you have to do is use the Rafflecopter below! The contest will run September 15–30, so enter while you can!

Josh Funk is the author of Lady Pancake & Sir French Toast (Sterling 2015), as well as the forthcoming picture books Dear Dragon (Viking/Penguin 2016), Pirasaurs! (Scholastic 2017), and more. Find out more about Josh at www.joshfunkbooks.com and on Twitter at @joshfunkbooks.

Lady Pancake & Sir French Toast is a thoroughly delicious picture book about the funniest “food fight” ever! Lady Pancake and Sir French Toast have a beautiful friendship – until they discover that there’s ONLY ONE DROP of maple syrup left. Off they go, racing past the Orange Juice Fountain, skiing through Sauerkraut Peak, and reeling down the linguini. But who will enjoy the sweet taste of victory? And could working together be better than tearing each other apart? The action-packed rhyme makes for an adrenaline-filled breakfast… even without a drop of coffee!