My Year in Wizard Prison: “Orange Is the New Black” and “Harry Potter” Counterparts

Last week a MuggleNet Creative Team staff member Sorted the Ladies of Litchfield into the four Hogwarts Houses. This week, as a further tribute to Harry Potter and the beloved, controversial Netflix show Orange Is the New Black, we bring character counterparts! And without further ado…

Piper Chapman – Merope GauntWhat a weird combination, right? What could make these two relatable? Well, Merope gives Tom Riddle, Sr. a Love Potion to keep him with her, whereas (Season 3 spoiler alert) Piper lies in order to get Alex resentenced at Litchfield so that she and Alex will never be parted, much like Merope and Tom. Piper is the reason Alex is back in prison. That’s got to be something like a Love Potion.

Alex Vause – Ginny WeasleyFeisty and striking, Alex and Ginny are pretty similar. Both are natural flirts to whom they love (Piper and Harry, respectively). Alex would be a total natural at Quidditch, and Ginny would be able to work the courts to her advantage.

Galina “Red” Reznikov – Severus Snape Snape may be the most like Red since Snape is always seeking the Defense Against the Dark Arts job, and Red is always seeking a way back to her power as Head of the Kitchen. They also glide around attempting to own their space. Snape blames himself for Lily’s death, and Red blames herself for Nicky getting sent away. Both are driven by guilt in their actions, such as Snape protecting Harry in honor of Lily all these years and Red seeking back her position of power to make sure “her girls” are okay. Er, well, maybe that’s just because she likes to be in power, too… 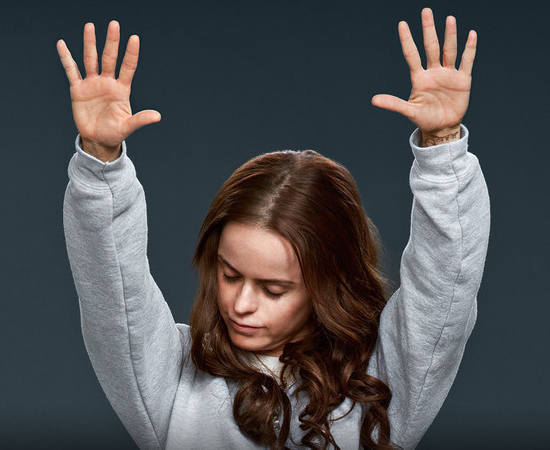 Tiffany “Pennsatucky” Doggett – Draco MalfoyI hate to pull this comparison, but Pennsatucky does most resemble Malfoy with her sly remarks that people aren’t as worthy as her and how she goes around talking big when she is actually quite cowardly. She (perhaps sort of if not totally) redeems herself in later seasons like Malfoy may have redeemed himself in Deathly Hallows by refusing to identify Harry, Ron, and Hermione at Malfoy Manor to Bellatrix.

Suzanne “Crazy Eyes” Warren – Luna LovegoodIt’s more than just their nicknames “Crazy Eyes” and “Luna” and the stereotypes against them that make these similar. While Luna has a much calmer and more accepting demeanor, the two of them often invest themselves heavily in helping their friends and those they are loyal to.

Taystee Jefferson – Hermione GrangerBook smart, loud about her knowledge and opinions, Taystee displays some Hermione-like qualities. She even works in a library, and Hermione basically lives in the Hogwarts one! Taystee’s dream come true. Nicky Nichols – Fred and George WeasleyNicky has the energy of the Weasley twins combined. She’s always looking for a little bit of trouble or trickery to keep her interested and would definitely carry a Marauder’s Map of Litchfield if such a thing existed. She knows all the secret “passageways” of Litchfield already.

Sophia Burset – Minerva McGonagallSophia knows what’s up, and so does McGonagall. They assert themselves, confident in who they are, and they are both heard when they speak. Both take control when things are falling apart, whether someone’s hair in the Litchfield salon or the Battle of Hogwarts, and both can take more than it appears. They are strong women!

Any other reasons for or characters to add? Let’s make this a collaborative effort! Comment below. and let’s talk about what makes – or breaks – these comparisons!