The summer’s blockbuster film, Jurassic World, is coming out on Blu-ray and DVD today! The latest installment in the Jurassic Park series of films, Jurassic World sees a new theme park built where Jurassic Park once stood. We had the chance to speak with one of the film’s stars, Nick Robinson, at this year’s New York Comic Con.

MuggleNet: What was it like to go from a comedy television series to then work on a huge action/adventure film?

Nick: [It] couldn’t really get any different, I think. I come from an indie background and the sitcom [Melissa & Joey]. It was a learning experience. Luckily, [I] had a lot of great people around to show me the ropes and fill me in on what [we] were doing and why we were doing it. [It] turned out to be a really positive experience and an adventure, regardless.

MuggleNet: Working with Chris Pratt, were there any pranks pulled on set?

Nick: He’s a machine! He has an improv brain like nobody I’ve ever meet before. You never knew what was going to happen, and he makes it that way and leads by example, so it was pretty fun.

MuggleNet: Do you have an appropriate example to share?

MuggleNet: What were your favorite scenes to film?

Nick: My favorite scenes to film... On a practical side, [one] was the moment the doors opened at the visitor center. That was just so cool to see what they were able to think up, and all the set decorations were so specific, and to see what 22 years of damage had ensued [on] this place. And the scene where Gray [played by Ty Simpkins] and I are in the veterinary unit and have to fight off the raptors. I felt like an action hero. The whole thing was shaking, and I had to roll a barrel off and zap them.

MuggleNet: The movie [Jurassic Park] is 22 years old, but you're only 20. When did you first encounter it, and what was your reaction to the original?

Nick: Um, I don’t remember the exact first time I encountered it, but [I was] pretty young. I remember, at least, by about [age] seven or eight, seeing it a few times. It’s a great film, like all of Spielberg's films. It has timeless qualities, and as soon as you get into it, you know you're going to see something good. Also, John Williams knows how to throw some notes together. It’s just a great movie-going experience.

You can watch the whole interview below:

During New York Comic Con, Nick was also present at the “opening of the gates,” where fans entered into the expo under the Jurassic World entrance and met a voracious raptor along the way. 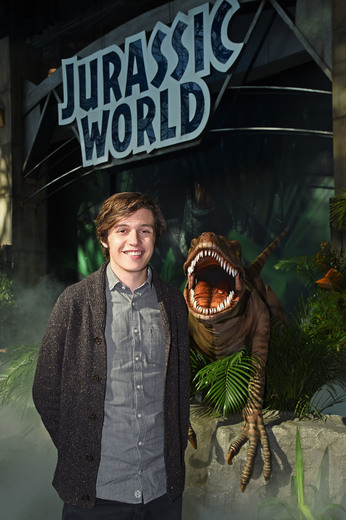 Nick will appear in the upcoming film adaptation of the young adult novel The 5th Wave, which is set to be released on January 15, 2016.