SPOILERS AHEAD. PROCEED WITH CAUTION.

SuperBob follows unlikely superhero Bob (Brett Goldstein) on his day off. Postman Bob was innocently jogging through a local park in his hometown of Peckham when he was hit by a meteor, bestowing him with superpowers, including the ability to fly. Soft-spoken Bob was immediately recruited by the Ministry of Defense and branded “SuperBob.” On his day off, Bob has a first date with June (Laura Haddock), who works at the local library, and recruits the help of his cleaner, Dorris (Natalia Tena – Nymphadora Tonks), to help him prepare. Yet work commitments call, and kind-hearted Bob is torn between work and his date. 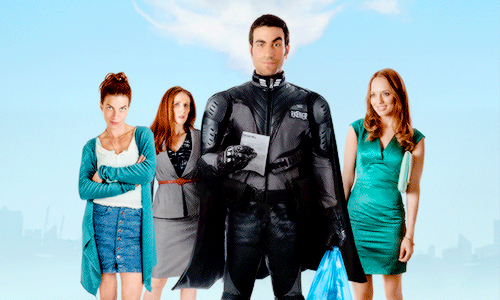 SuperBob, directed by Jon Drever, premiered at LOCO Film Festival in January and stars some big names in British comedy, including Catherine Tate and Joe Wilkinson. The movie does not fail to disappoint in providing witty humor throughout. Brett Goldstein provides us with a relatable and lovable protagonist who uses raw emotion and slight awkwardness to draw the viewer in; you just can’t help but find yourself rooting for him. All the while, Natalia Tena’s fiery character, Dorris, motivates Bob to stand up for himself and imparts upon the audience a memorable performance and charming character. Catherine Tate supplies the usual comedy that fans have grown to expect from her, a trait that transfers well onto the big screen; Catherine’s character, Theresa, is an irksome yet well-meaning antagonist.

SuperBob is a lighthearted British comedy with an unsuspected romance thrown in. Lovable characters and a witty plot make this movie very easy to watch and enjoy. As far as independent movies go, SuperBob is definitely one of the best produced that has been released this year. You should definitely make time to catch this movie.

SuperBob is available to see in select movie theaters now – find out whether it lands in a theater near you. If it isn’t, don’t worry; it is also available to rent or buy.


Want more posts like this one? MuggleNet is 99% volunteer-run, and we need your help. With your monthly pledge of $1, you can interact with creators, suggest ideas for future posts, and enter exclusive swag giveaways!
Support us on Patreon