The Fantastic Phantoms of Hogwarts School of Witchcraft and Wizardry

It’s that time of year when we gather together to celebrate all things spooky, creepy, and supernatural. The magical world of Harry Potter is full of manifestations of the dead, so why not prepare ourselves for All Hallows’ Eve with a salute to our favorite phantoms of the wizarding world?

The resident ghost of Gryffindor Tower earned his decapitation in quite possibly the most Gryffindor way possible: overconfidence and a spell backfiring. He attempted to straighten the teeth of the Lady Grieve and instead gave her an impressive set of tusks. Sounds like the 15th century Seamus Finnigan. But death seems not to bother him, his only complaint being that the Headless Hunt denies his application every year.

Half an inch of skin and sinew holding my neck on, Harry! Most people would think that’s good as beheaded, but oh, no, it’s not enough for Sir Properly Decapitated-Podmore.

Sir Nicholas is always on-hand to help Harry in his time of need and even gives him an insider’s perspective on death after Sirius passed on.

The gentle ghoul of Hufflepuff is everyone’s friend. He gets along with students, professors, and even Peeves the Poltergeist. He is always trying to give Peeves second chances, even at the disdain of other ghosts. Sir Nicholas complains before the Start-of-Term feast in Harry’s first year.

My dear Friar, haven’t we given Peeves all the chances he deserves? He gives us all a bad name, and you know, he’s not really even a ghost.

He is a jolly soul, the perfect fit for a Hufflepuff ghost. The senior churchmen of the clergy he belonged to executed him for his strange ability to cure pox… and his even stranger ability to pull rabbits out of the communion cup.

Hope to see you in Hufflepuff! My old house, you know.

The Bloody Baron was the Slytherin ghost, a gaunt and silent specter covered in silver bloodstains.

The ghost of Slytherin House is a rather creepy specter. He appears menacing to everyone – even students of his own house – and is the only ghost that is able to control (or terrify into submission) Peeves the Poltergeist. His background is even scarier; he accidentally killed Helena Ravenclaw in a fit of rage over her unrequited love and refusal to return with him to Hogwarts. He then used the same knife to kill himself out of remorse. The two both became ghosts at the school, but they do not interact (curious, I know).

A witty witch in life, the Gray Lady went on to become the resident ghost of Ravenclaw. She is an emotionally unstable recluse, choosing to ignore students for the most part. True to Ravenclaw form, she entrusts only those she deems intelligent enough. Luckily, she provides Harry with the crucial riddle to finding her mother’s lost diadem:

It is here, in the castle, in the place where everything is hidden. If you have to ask, you will never know. If you know, you need only ask

And Harry is smart enough to deduce the answer.

Professor Cuthbert Binns is such a devoted teacher that even death could not stop him from expanding the magical minds that found themselves in his classroom. It is not certain when Binns died, though he couldn’t tell you either because he seems not to have noticed.

Professor Binns had been very old indeed when he had fallen asleep in front of the staff-room fire and got up next morning to teach, leaving his body behind him.

Though credit is given to Professor McGonagall in the films, Professor Binns is actually the teacher who relays the legend of Salazar Slytherin’s Chamber of Secrets to Harry and his classmates.

Poor Myrtle. She gets picked on just as much in death as she did in life, both by students and Peeves the Poltergeist. She tragically died the instant she made eye contact with the Basilisk when Tom Riddle opened the Chamber of Secrets in 1943. Eventually, Harry, Ron, and Hermione develop a special bond with Myrtle. She is there when they make Polyjuice Ootion, when they open the Chamber of Secrets, and when Harry opens the golden egg from the first task of the Triwizard Tournament.

Ooooh, it was dreadful, it happened right in here, in this very cubicle. I’d hidden because Olive Hornby was teasing me about my glasses. I was crying, and then I heard somebody come in.

Known around Hogwarts as a nuisance, Peeves is always playing practical jokes and blowing raspberries. Professor Dumbledore and the Bloody Baron are the only souls that Peeves listens to, despite being at Hogwarts since before the school was formed around 993. On occasion, he has been known to listen to Professor McGonagall and even the Weasley twins once. From dropping water balloons on first years entering the castle to writing rude words on the blackboards of empty classrooms, Peeves covered the entire spectrum of pranks. No one is spared from his torment; he even taunted beloved Professor Remus Lupin with the song “Loony, Loopy Lupin” during his time as Defense Against the Dark Arts teacher. When he is needed, though, he comes through. He battled against Umbridge alongside Fred and George and fought against Voldemort in the Battle of Hogwarts.

[Though the other specters do not consider him a “ghost,” the word “poltergeist” is German for “noisy ghost.” Additionally, he was already left out of the films, so he earned a spot on this list.] 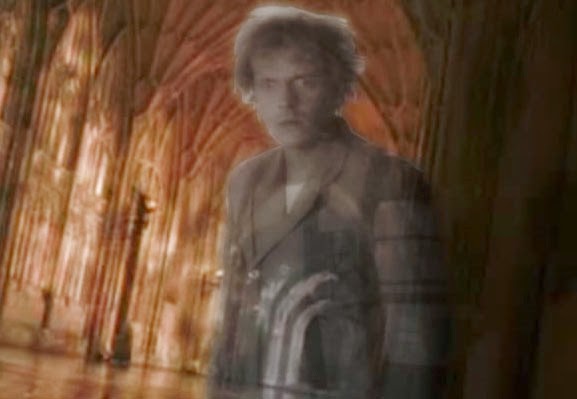 These freaky phantoms are crucial to the story of Harry Potter. They make us laugh, cry, and occasionally frightened and disgusted. For that, we thank them. Cheers to the ghosts of Hogwarts Castle. May you haunt long enough to see many more deathdays!

Who is your favorite Hogwarts ghost?