MILD SPOILERS AHEAD: PROCEED WITH CAUTION

Career of Evil begins with our protagonists, Cormoran Strike and Robin Ellacott, being confounded by a severed leg sent to Strike’s office. What follows is a novel that is quintessentially J.K. Rowling, a.k.a. Robert Galbraith – an incredible eye for detail, characterization to die for, and consummate skill in weaving several subplots while maintaining a cohesive story.

Except for that last part… the personal drama of the protagonists, Robin and Cormoran, eclipses what is ostensibly the core plot of the hunt for a serial killer from Strike’s past. Not to toot my own horn, but as soon as the descriptions of each of the suspects were given, I immediately guessed (and guessed correctly) who the killer was. Disclaimer: I am normally absolutely TERRIBLE at this – but unfortunately, it was so immediately obvious, I spent the rest of the book being at once bored by the investigative plot while thoroughly enjoying J.K. Rowling’s writing style, which seems to be improving with every book she writes. 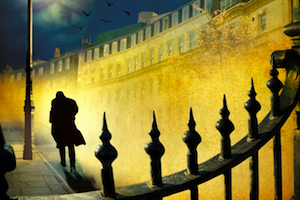 I cannot tell you how much I enjoyed the actual prose of this book, as well as the lengthy research J.K. Rowling must have undertaken in order to accurately portray victims of abuse. The details pertaining to the “farting couch” and the descriptions of Cormoran’s unhealthy pub-food diet are the kinds of tidbits that J.K. Rowling particularly excels at (and that I particularly enjoy), while the constancy of Robin’s character – efficient, resourceful, determined, and clever – is not compromised in view of the revelation of her past. While this narrative release gives her character greater depth, it treads the tightrope between how such experiences affected her versus her underlying personality better than many other explorations of similar characters with similar backstories.

The real problem is in the main murder plot: Three villains each with dastardly dispositions – at times, of cartoonish proportions (the murderer’s predilection for amputation feels garish rather than terrifying; the chapters from the murderer’s perspective feel two-dimensional rather than an insight into a psychotic mind). In future Strike books, I hope the other two villains make a reappearance; otherwise, huge amounts of narrative exposition will largely be for naught.

The red herrings that Rowling is normally so adept at planting are not particularly convincing this time around, and Strike’s coup d’état feels like a deus ex machina – rather than deducing the murderer from a relatively simple study of his suspects’ personalities and/or a longer period of study of each suspect’s opportunity and ability, a last-ditch Agatha Christie-esque explanation of the murderer’s opportunity and ability (i.e., in the novel’s last 50 pages) is suddenly thrust upon the reader. It doesn’t feel satisfying, it doesn’t feel cathartic, and the novel’s great cliffhanger ending feels lacking in panache. It was only a few hours after ranting about how disappointed I was that I was able to begin to see the truly excellent parts of the book, barring this frustration.

If you are a veteran Strike reader and enjoy Strike and Robin’s dynamic especially, this is the book for you. However, if you enjoy a good murder mystery, this book falls substantially short.

Ever wondered how Felix Felicis works? Or what Dumbledore was scheming throughout the series? Pull up a chair in the Three Broomsticks, grab a butterbeer, and see what hpboy13 has to say on these complex (and often contentious) topics!
Want more posts like this one? MuggleNet is 99% volunteer-run, and we need your help. With your monthly pledge of $1, you can interact with creators, suggest ideas for future posts, and enter exclusive swag giveaways!
Support us on Patreon